We proudly present: the world's lightest Full Suspension FATbike: Huraxdax SL by Maxx. And us! 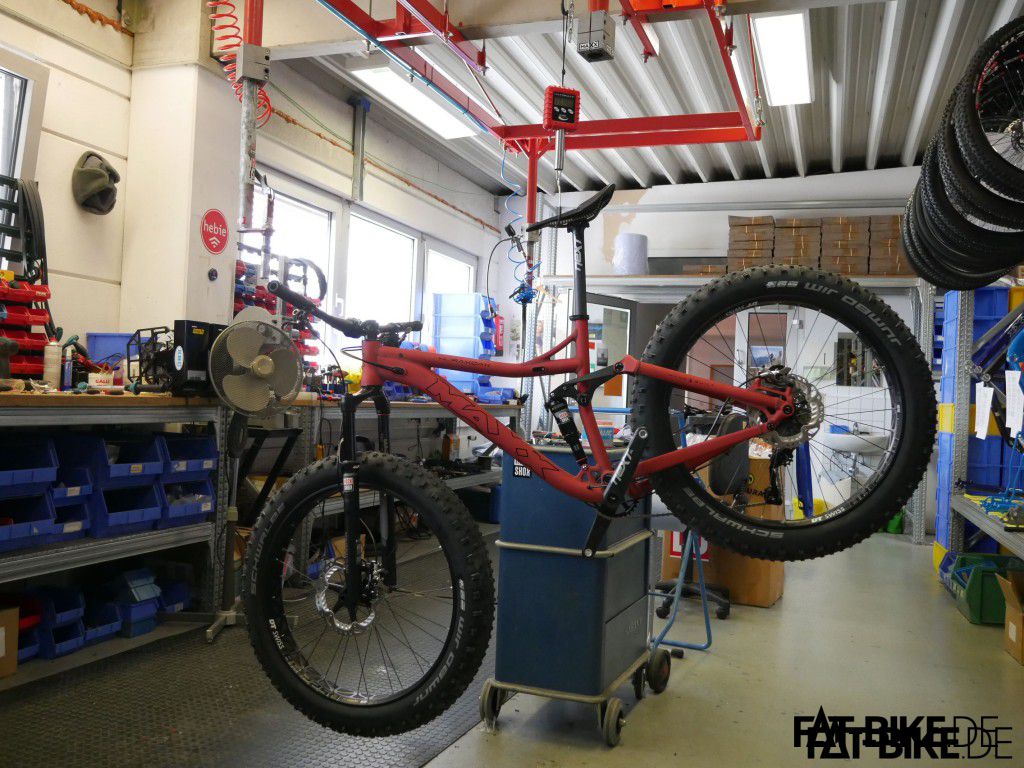 There are always some projects we're involved in, e.g. our FATBike Enduro. However this is one different – we're making the step from just writing funny stuff to serious development. Sort of… When testing FATBike Fullies back in March 2015 we claimed they are way too heavy. So, together with German Bike manufacturer Maxx, we thought out a lighter version of the Huraxdax – which, and boy we are proud to say this, is currently the lightest Full Suspension FATBike you can buy from stock! Tough job, particularely considering that we had plenty things in mind… 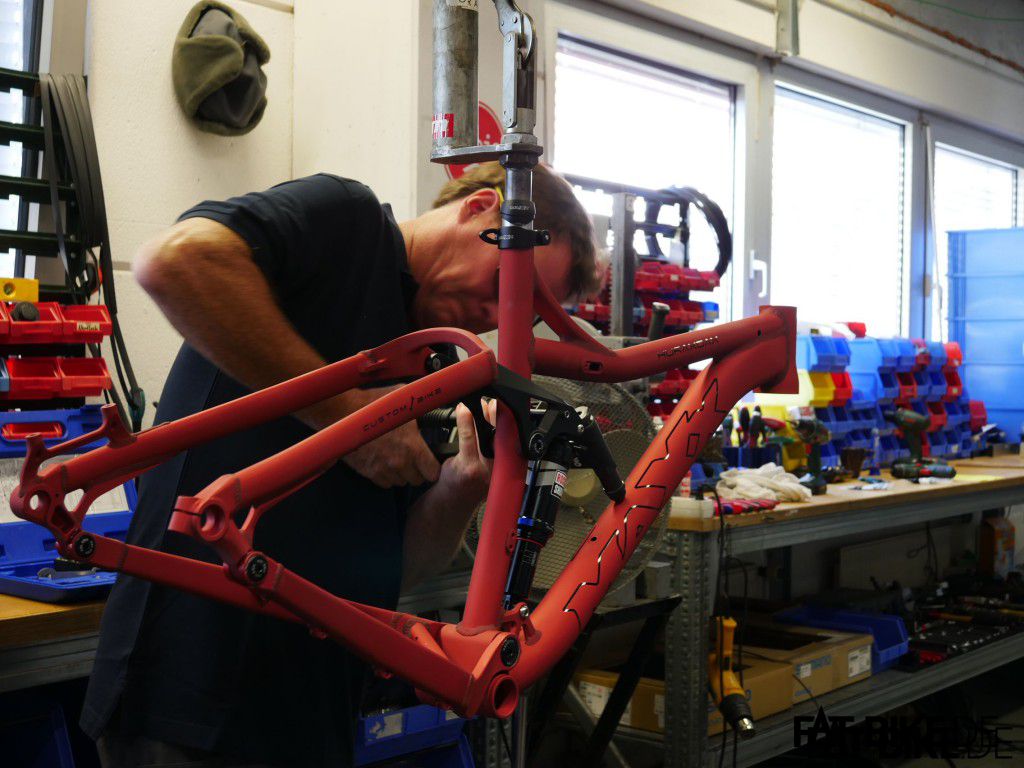 That's how we began!

Also it's worth mentioning that we were also greatly supported by Bike Action (German Race Face distributor), DT Swiss, Schwalbe and Tune who supported us with their know how and contributed some of their latest hard-to-get stuff.

And for all of you who can make it to Eurobike: don't miss the world's lightest Full Suspension FATBike at Maxx‘ stand A2-320. 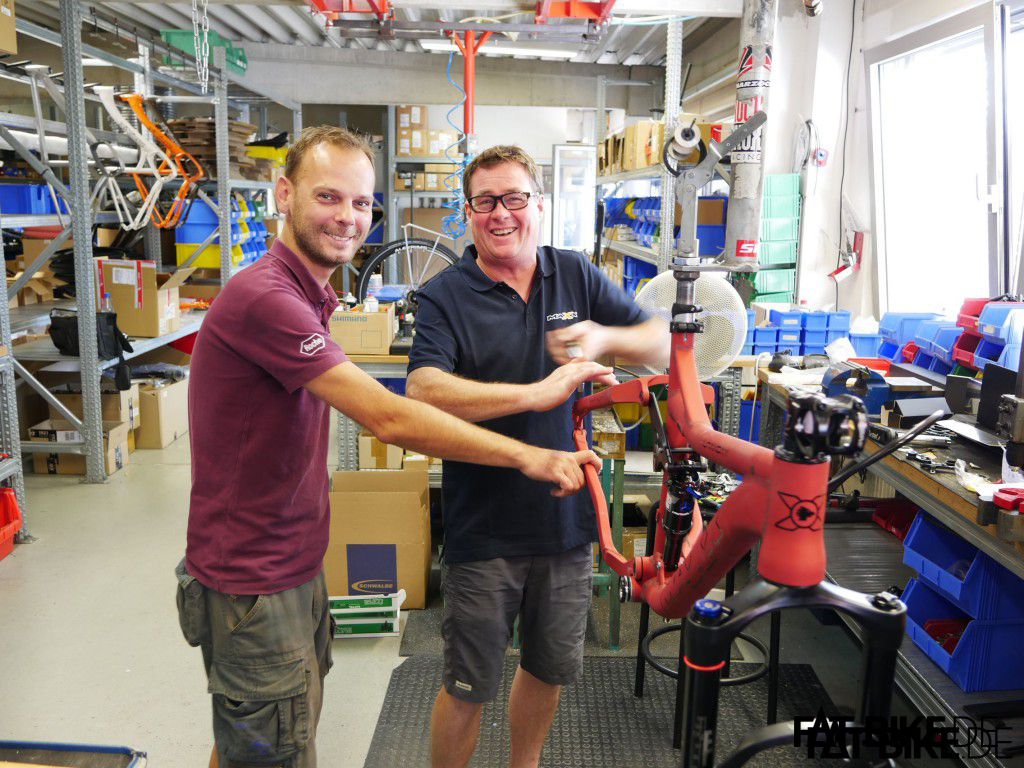 Don't wanna bore you, so let's dig into the details! As said, basis for our ideas was the stock Maxx Huraxdax FATFully. Together with the team of Maxx we spent loads of time thinking about how to save weight in a way that the result would still be a true FATBike. And there were plenty of long and intense discussions… Believe me! But it was worth it! 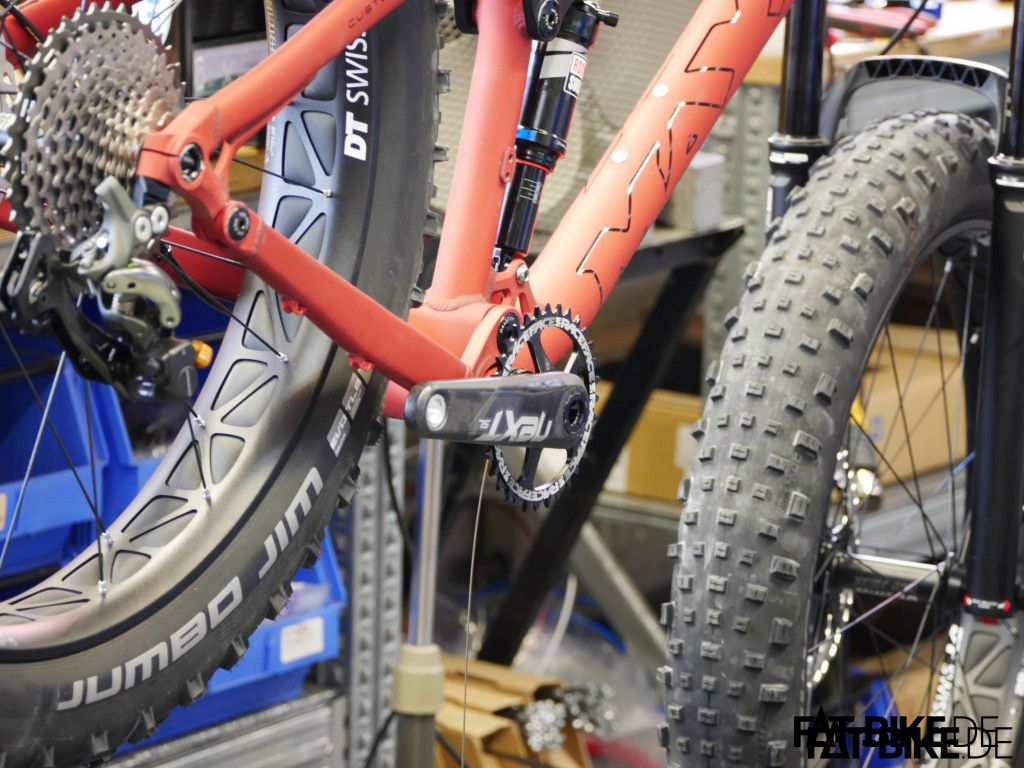 A first impression of the final result.

Naturally we started from the heart of our bike – the frame – which in case of the Huraxdax is made of 100% aluminum. That's good as we at FAT-Bike.de are traditional – we grew up with anodized aluminum frames long before powder coating became as popular as it is today. Wasn't easy to convince Uwe Matthies, head of Maxx, of this idea as Maxx is is famous for their awesome powder coating paint jobs. But our killing argument was „consequence“ – not knowing that we would have to pay for it… However the heart of our bike is now anodized in a noble red. Beautiful!

Shift and brake that cut the weight! 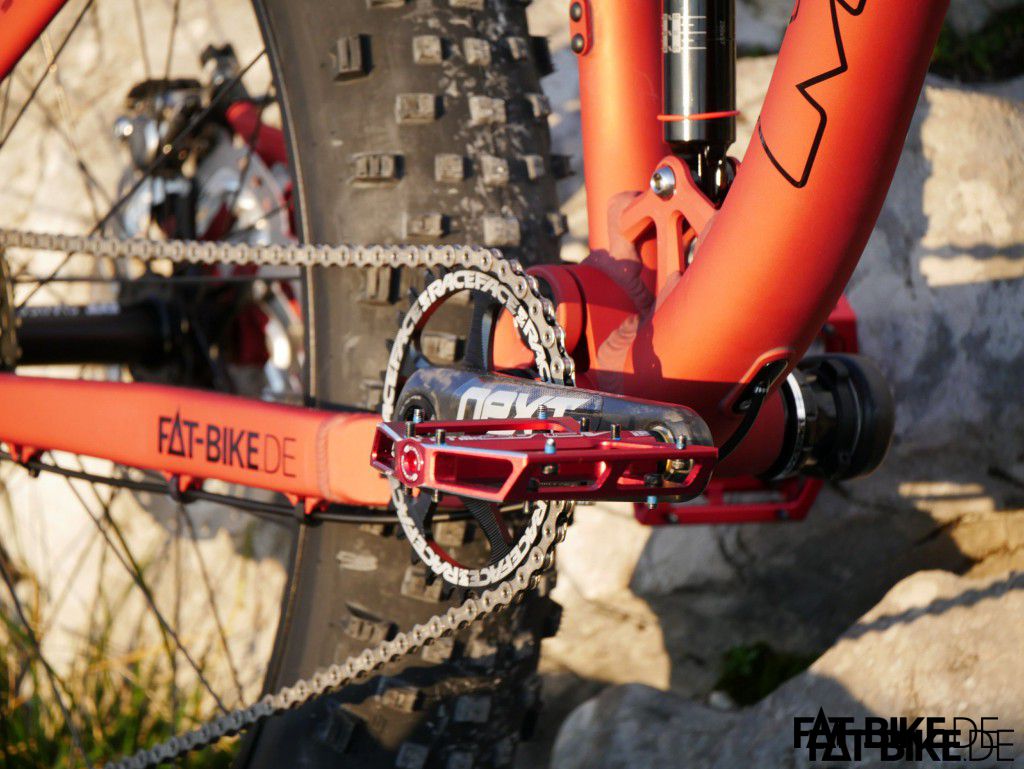 Drivetrain with carbon cranks. The Acros pedals are fitted with titanium spindles.

Oh boy, we're damn bad in rhymes… Really sorry for that poor one. But we're good in bikes! So we chose the brand new Shimano XTR 1 by 11 for the bike. But hey, wait – we usually damn one-by systems! Right, but you can't build a serious lightweight bike without it. So we chose the 11-40 teeth sprocket and combined it with a 32 teeth chainring to make the bike fast on the track. 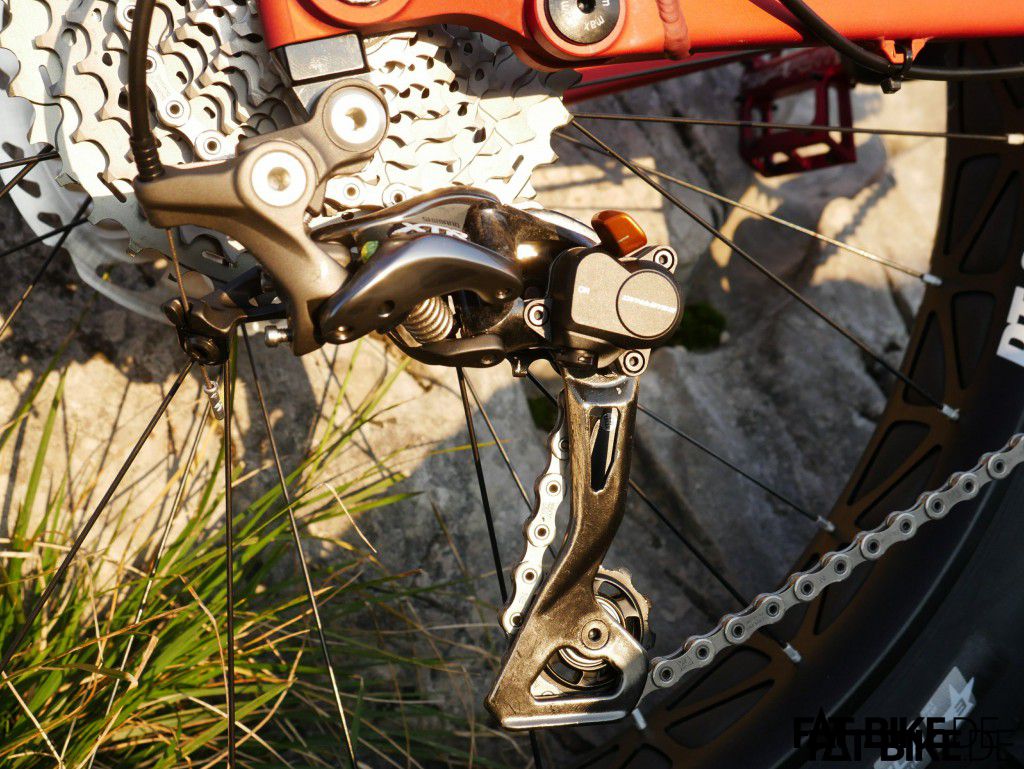 Drivetrain is filled with „Dark Matter“!

To stop the pace we added nice XTR brakes as well – and of course it's calipers chew on chunky 203/180mm discs. No discussion about whimpy brakes. May the force be with you! 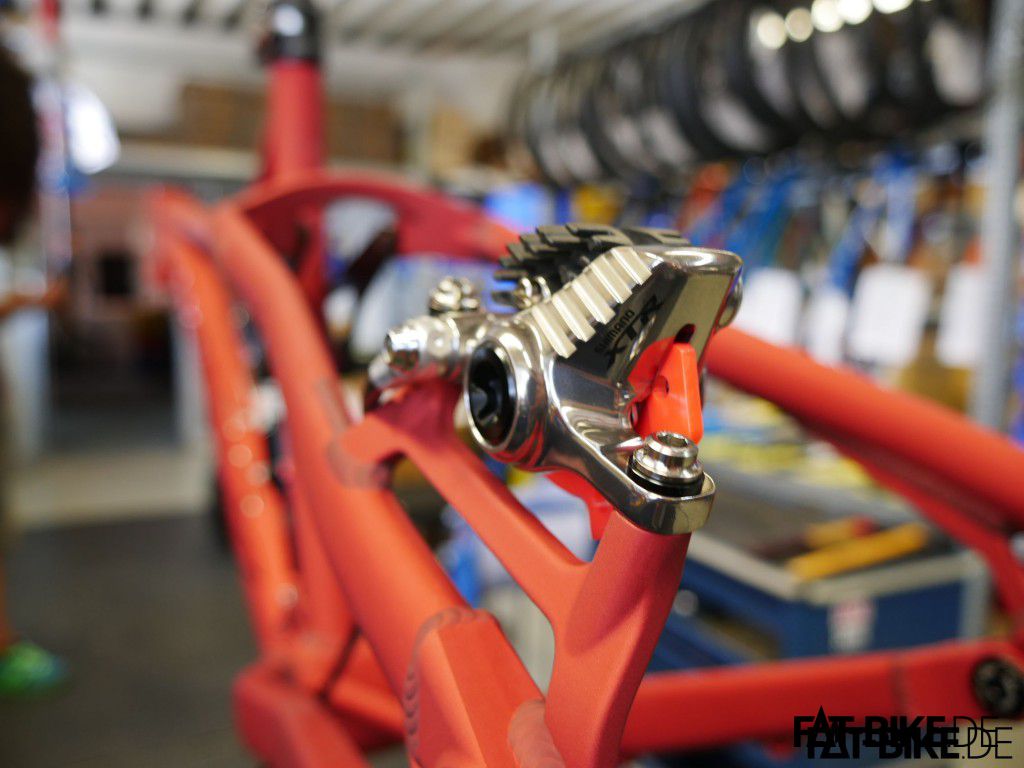 To drop the weight of our drivetrain even further, we added a Race Face direct mount chainring to a matching pair of awesome Race Face Next SL carbon cranks. They're tough, they're beautiful, they're light – they're perfect for the Huraxdax SL! 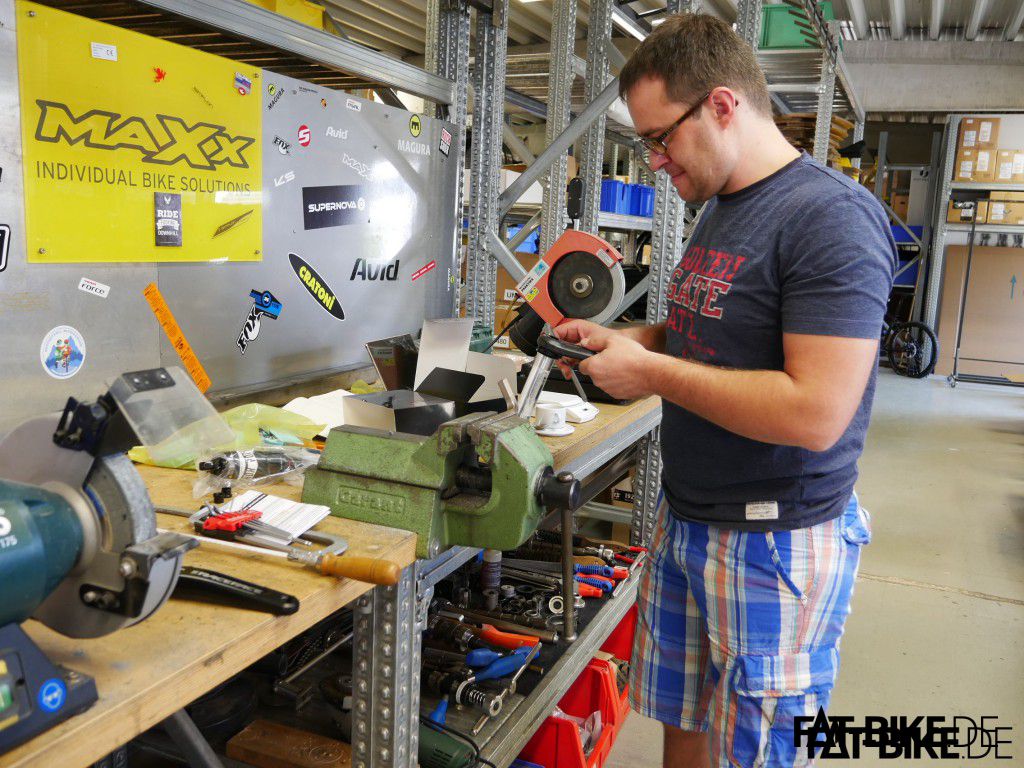 Boris of Maxx prepares the Next SL cranks. 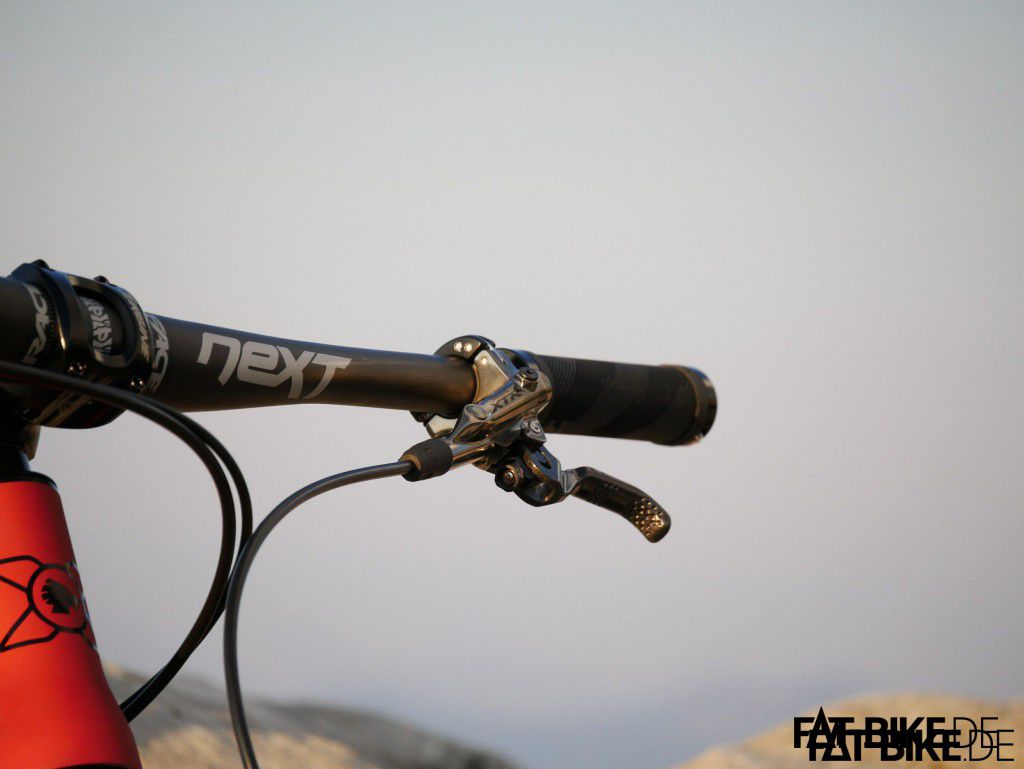 Handlebar and brake lever made of … yepp: carbon!

So guys, this is what WE understand when speaking about a „Carbon Footprint“! We used it where we could get hold of the dark matter! Take seatpost and handlebar – they also come from the Race Face Next SL carbon series. You may ask: why not a dropper post? Sure, go for one, if you wish. The additional weight is not that bad and the frame is well prepared. But we intended to be consequent, so we chose a fixed post. But being pragmatic on the other hand there will be a quick release seat clamp (not yet on the fotos, sorry…). The perfectly smoothened inner wall of the seat tube allows smooth and scratch free adjustment and lowering of the post. 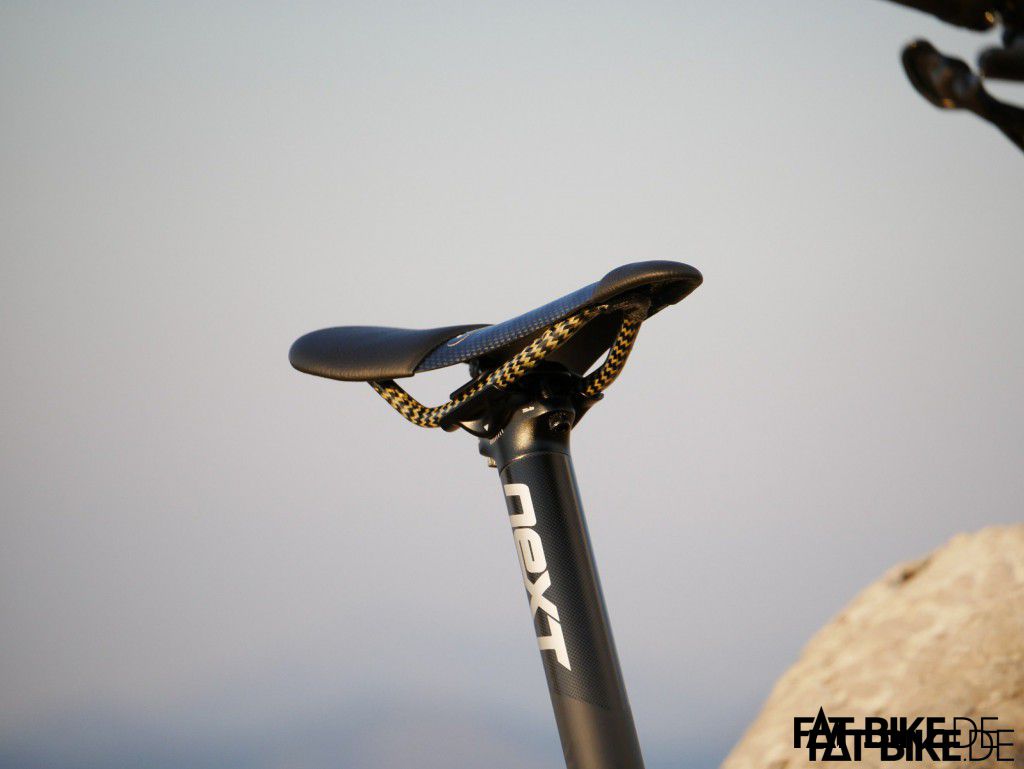 The handlebar is pretty tough stuff, too – clamped into a 35mm Race Face Turbine stem it's 760mm wide. Enough for good fun and solid control! To not slip off this brave carbon bar we attached a pair of Race Face Sniper Lock On grips to it.
Ah, and we could not help crowning the mighty Next SL seatpost with a Tune Speedneedle saddle. We know it's super exclusive. But maybe that's why we like it…

This is how we roll

So, we nearly have a bike. But we need wheels. And here we had loooong discussions… We thought about super light Tune hubs and carbon rims, tubeless and whatever you may think of. But each idea would have vaporized our idea about the price… Luckily the blokes of DT just came out with the BR2250 wheel set. And it's weight is stunning! A mere 2.4kg for both wheels, readily equipped with rimtape! We'll have a separate test on them. But not today. Today they make our bike lighter. And the BR2250 does an amazing job! 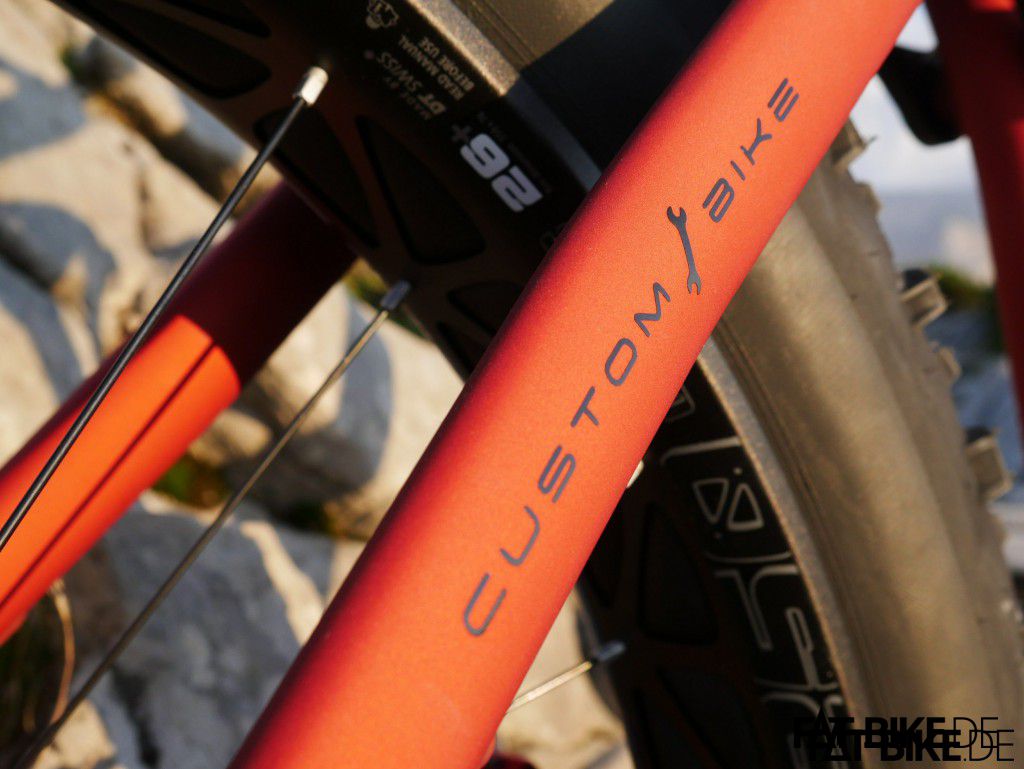 Custom Bike. No doubt about it!

But we have to admit that Maxx has a secret weapon in all wheelset related questions: Fred. This guy doesn't even need to be awake to build a perfect wheel! Fred's magic fingers combined the officially not tubeless ready DT Wheels with Schwalbe Jumbo Jim 4.0 tires and with: not tubes. Can't tell you what he did – but he did well! 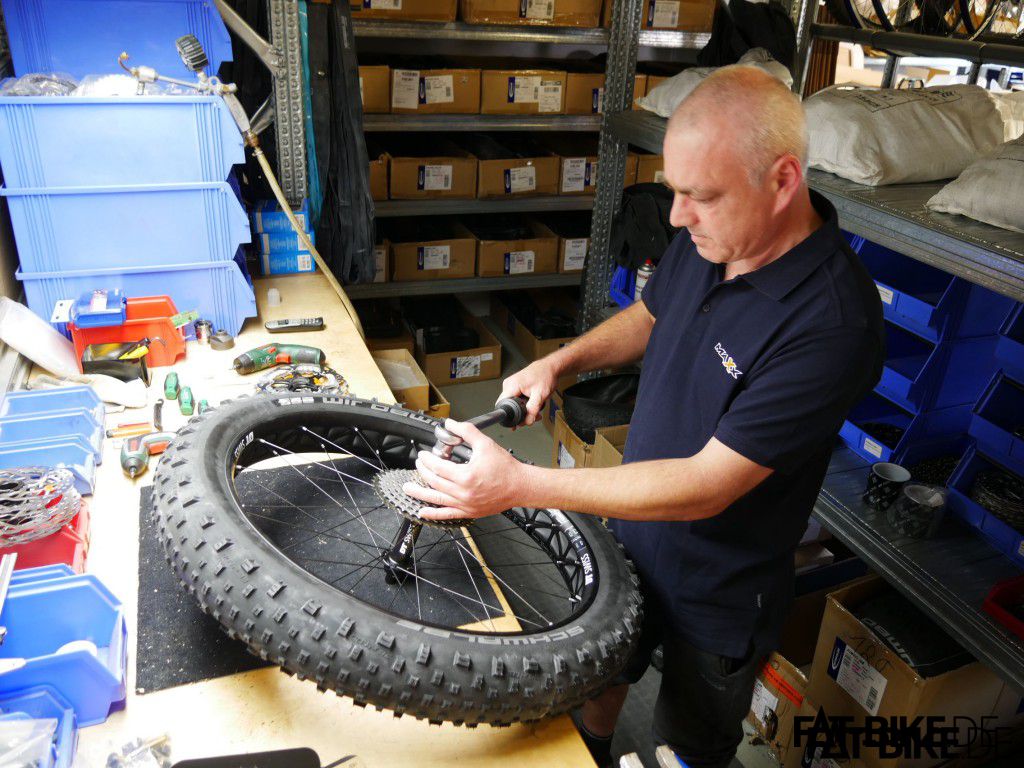 The magic wheelsmith at work: Fred.

But 4.0 tires on FAT-Bike.de? Yeah, well, this was – as indicated above – the trade-off WE made for the anodized frame. It is in fact consequent and we simply call it „summer tires“. Maybe in winter we will top it up to 4.8 Super FAT! 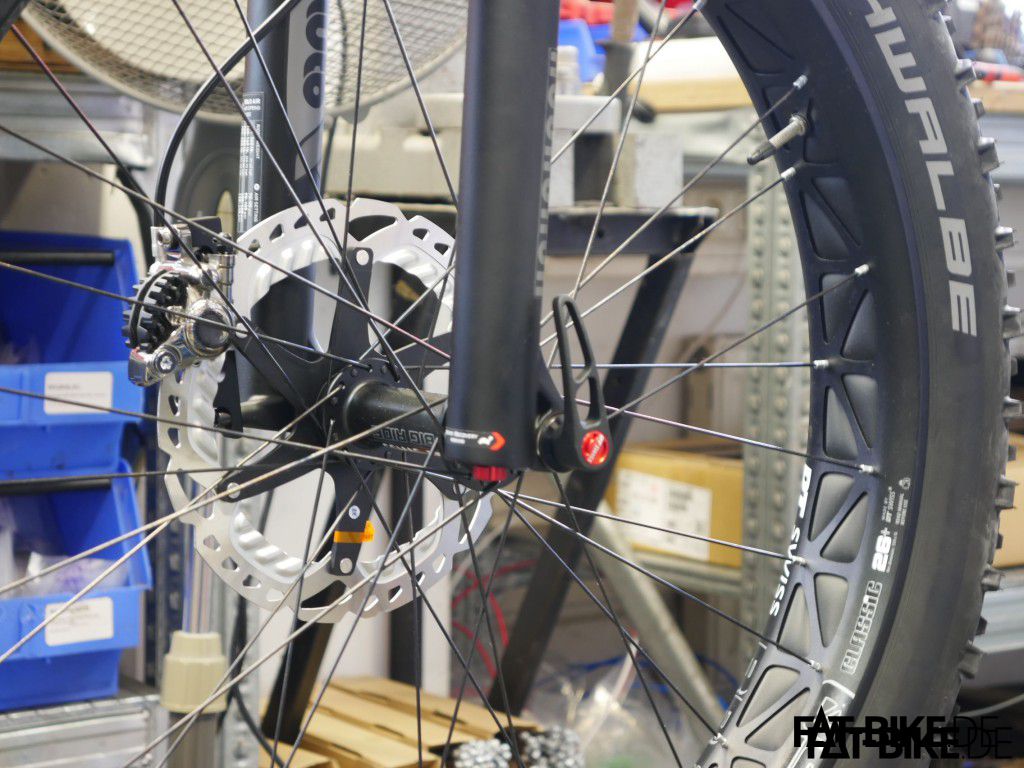 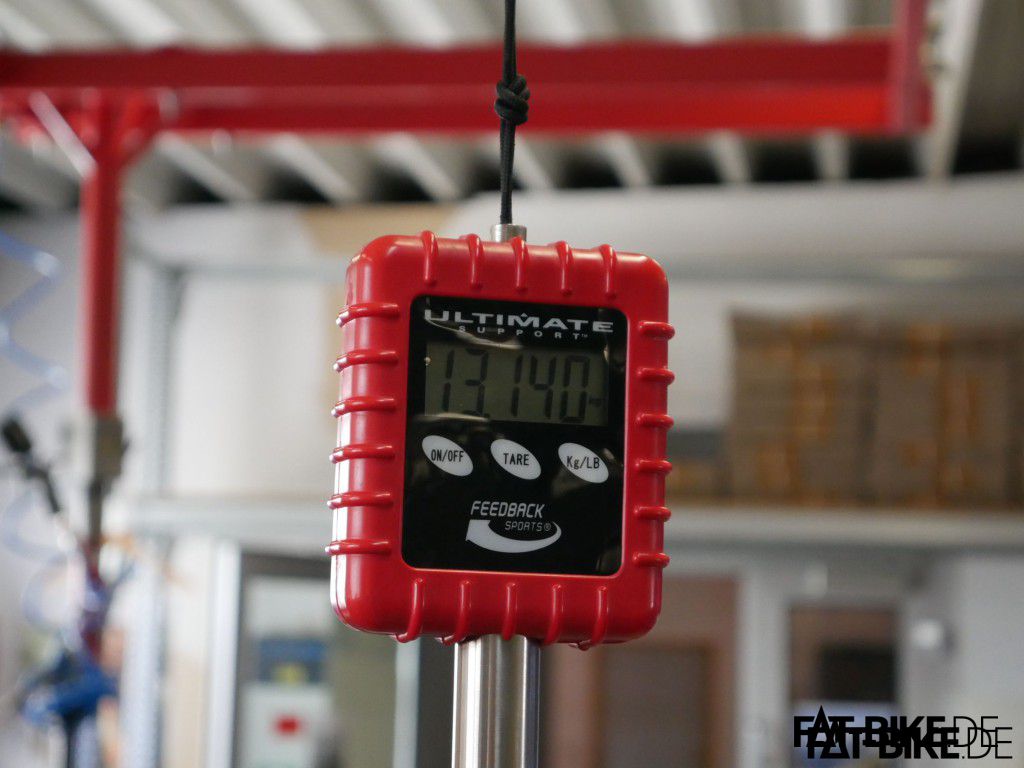 Clear statement. No calculation based on sales brochure values.

So much effort… But this time it's simple: the lightest stock full suspension FATBike on the market! This means: we ended at an impressive 13.15kg – which brings it into the range of fully suspended MTBs!!! For better comparison this was measured without pedals. But just add 300gr. for the super light Acros Pedals with titanium spindle you can see on the pictures – and be ready to race, run a marathon, Transalp or just a loooong tour! Having had a first short testride the Huraxdax SL turns out to be extremely quick and nimble! 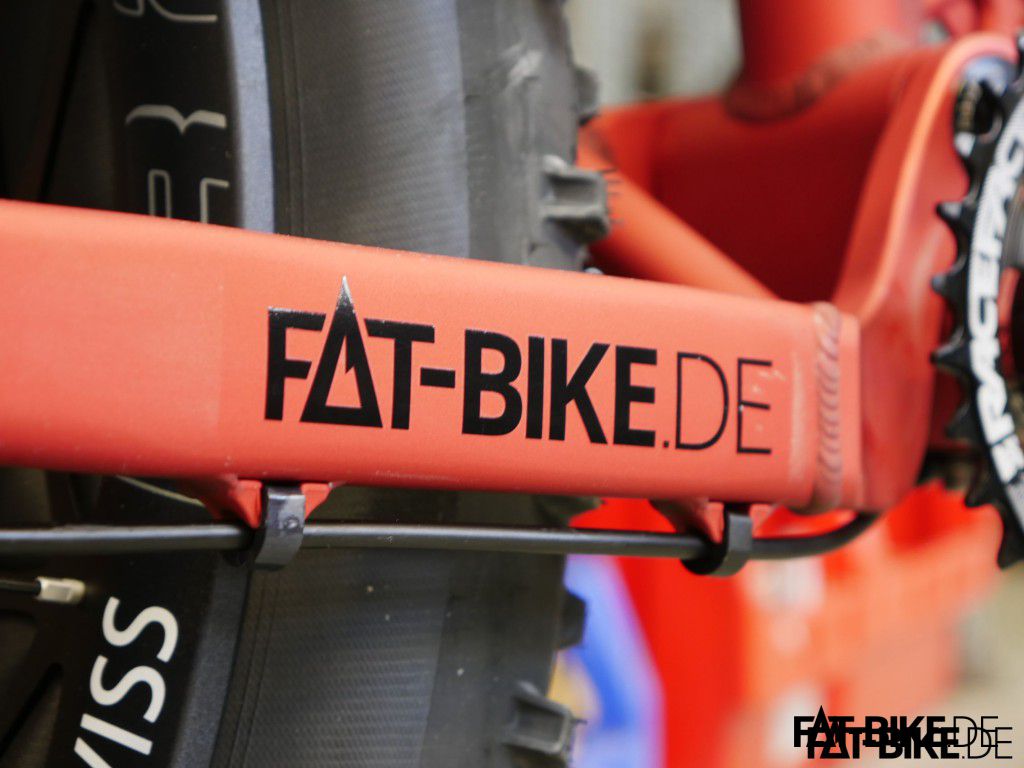 Can't miss that one…

But wait – did we say „stock“? Yes! The gentlemen at Maxx will offer this bike regularly to their customers! Maybe not with the anodized finish, this part is still under investigation.Soon you will be able to select this superlight FATFully from Maxx‘ online configurator! It's price tag will show 6.299,- Euros which means the high end version charges your purse with 2.700,- more than you have to pay for the base model.

So… Impressed? WE are! But wait, there is one more thing. Whilst we were out with Maxx we exclusively shot some pictures of a very different expression of the Huraxdax. Featuring way more power than you could pump out of your legs! And it's a true life savior. Curious? Then make sure you'll be back here next Wednesday! 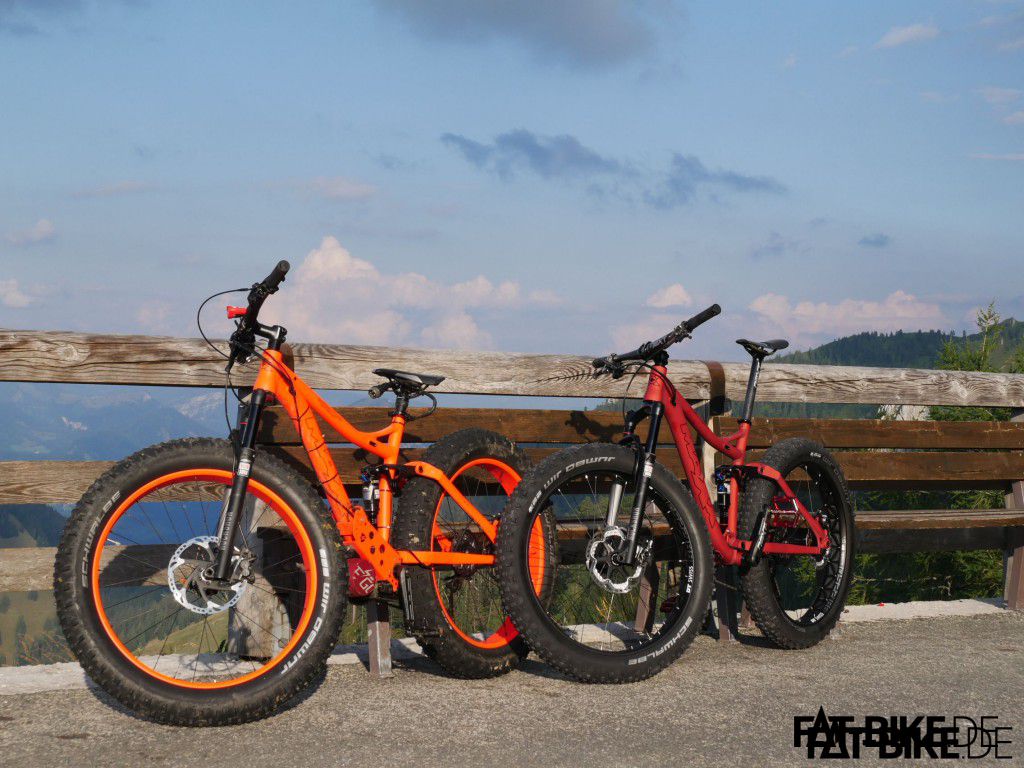 Strong and light. In exactly this order.