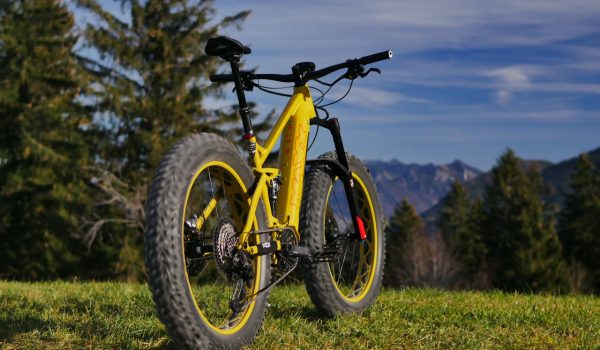 UPDATE – on November, 29th 2020 we published the below article on the latest 2021 Maxx Huraxdax ELS. Meanwhile we received an update from Maxx. On the one hand side the pre-production model was equipped with a Fox shock, which eventually has been replaced by a Manitou-made Mara (Mara Pro as an option). Clear benefit of that move is that now you can have a perfectly blended Manitou chassis all through.
Moreover the final base price has been set to € 6.999,- (incl. 19% MWSt / VAT). We have adjusted the article respectively.

Cycling is a journey. A journey that sometimes may be challenging on tough climbs or boring stretches. But it usually rewards you with badass sights, a badass trail or a badass time. Developing a new bike is equally a journey and in the end you may have a badass bike. Sadly, for many FATBike manufacturers that journey turned out to be merely a weekend trip. FATBike? Whatever! But there also those out there who are traveling with the tenacity of Christopher Columbus, sailing along to explore new horizons. Which brings us right to the new 2021 Maxx Huraxdax ELS which we exclusively present to you today. The modern Christopher Columbus from a Bavarian village called Rosenheim is Uwe Matthies. Together with his crew he has shaped the hottest Huraxdax ELS ever and put it on a pair of FAT wheels. Though the journey never ends: land ahoy!

Speaking about a journey, the Maxx Huraxdax has come a long way… It all set off many years ago when a (more or less) conventional FATFully first saw the light of the day. Certainly an alien beyond aliens, however designed with a fairly conservative frame geometry and some wicked bows and bends. Even the first electrified version „Huraxdax EL“ came into the market based on that setup. Over time tubes where straightened, geometry made more and more trail capable, motors became stronger and batteries more lasting. Smooth evolution.

Now that's gone for 2021. Viva la revolución! ‚cause that's what the new 2021 Huraxdax ELS is: a badass revolution. This time everything is different, even as far as the frame is concerned not one stone was left upon another. The head angle was chopped to a slack 66° (was 68°) and the likewise chopped chain stays (-14mm) indicate a crisp handling and full control.
We collected all other specs within our highly acclaimed FATBike-In-A-Box:

All data is based on manufacturer's data, referring to size „L“

The real revolution, however, rotates down in the engine room where where Brose, after many years, made room for a new kid.

Just to put things straight: we used to love the previous Brose motor. With it's brute force it easily kicked the asses of all the other FATBikes that were steamed by electricity. But well… Better has always been the enemy of good. Shimano's Steps EP8 is lighter, more comfortable, makes less noise, needs less maintenance and is much more flexible. Its mighty 720Wh power pack drains slower than a keg of mineral water at the Octoberfest.
Overall, the new setup chops another 1.5kg off the curb weight – says Maxx. Due to all the other changes we couldn't verify that value but quote the manufacturer – with no guarantee.

However, there is something happening from the very first time the wheels spin – a feeling of ease and smoothness. Brose is more on the sledgehammer side of live, alive and kicking with brute power. Unlike the German stallion the Japanese EP8 is a gentleman, though the torque is nearly identical. Everything happens smooth and nicely polished, and even under permanent heavy load the EP8 stays nicely silent. In a nutshell: it feels organic. Hard to describe… What we want to say: you don't really FEEL you're supported by a motor. It leaves the nearly perfect illusion that it's you who propels that bike with relentless power. Okay, it may sound like marketing chitchat… But no. That's simply what it feels like.

Manufactory – you have none? Build your own!

Apart from propulsion also the frame itself was changed to the bone. There is a new custom made battery cover and hidden housing for cables and lines giving that clean and and distinct factory look

The rear end gives room for up to 5″ tires, i.e. you can squeeze in a Terrene Johnny 5 tire. However, a Vee Tire Snow Shoe 2XL will most likely not fit due to its extreme height. Unchanged for 2021: the high level of craftsmanship and an extended choice of colors to have you frame (and rims, if desired) powder coated.

But not only the color is a matter of taste. The whole build can, within some given limits, be individually configured. Maxx, as usual provides a configurator – standard in automotive but still a unicorn in the bicycle industry. Our pre-production model came equipped with Shimano XT gears, Magura MT7 brakes, Race Face Atlas Stem and 800mm bar, a Fox dropper post, an insanely bright Lupine SL headlamp incl. tail light and a pair of secret tires. Secret? Right, secret. Really! Fascinating, not?

Less of a secret but still fascinating is that new Mara damper by Manitou which will give your rig that perfectly blended feel of a pure Manitou chassis when joining the 150mm Manitou Mastodon Pro fork. Overall, all upgrades bolted onto our test bike sum up to about 1.200,- Euros compared to the stock version.

For travellers. And spead heads. And stylers. And all the others.

Now, unfortunately highly praised improvements often are improvements for the worse. Why the hell did they do this?!? And often the main thing is: we did something new, so god damn love it!!! To uncover such fails we tested the 2021 Huraxdax ELS the hard way, kicked it up and down the hills and rode it from „lazy“ to „limit“.

You still have to deal with the hefty weight that sets your limits to jumps and aggressive steering and braking. But apart from that the 2021 Huraxdax ELS is damn fun to ride! Shooting uphill feels as if you were kicked by a donkey – and even down hill this bike is more fun than any of its predecessors. The new geometry layout nicely combines a nimble short rear end with the stability of a slack head angle which heavily improves handling of that chunky 24kg machine.

The chassis, in case of our pre-production test bike still being composed of a Fox Damper and Mastodon Pro fork and providing 150mm front and 145mm rear travel, soaks up any obstacles as greedy as the Team of Maxx soaks up a crate of cold Wheat Beer. Only the stock Magura MT7's brake pads (blue, one piece) leave room for improvement. Considering the capabilities of power unit and chassis we recommend an upgrade to high performance two-piece pads to unleash the power of a 4 piston brake.

But also more settled and matured riders who don't race for setting new records and who get enough adrenaline from a red wine that doesn't match their filet mignon will be satisfied. Even though it's a high performance rig the 2021 Huraxdax ELS gives you a very comfortable and ergonomic seating position. And it also doesn't distract you from pure enjoyment with a bunch of switches and levers or complicated operation.

Are far as it gets…

So, the 2021 Huraxdax ELS is highly versatile. And, as usual at this stage, many of you will ask: how long does it last? And, as usual our answer will be: seriously… No clue! For us such statements are as useful as manufacturers statements on the gas consumption of your new car. And, moreover, we don't have a standardized test on hand. But let's put it that way: after more than 60km/900hm of test ride, whereas 350 of that 900m elevation were pushed at maximum pulse, the mighty 720Wh battery was drained by slightly more than 50%. So: endurance is clearly a priority. And even without that additional thrust one can easily ride back home as the Shimano system works with very low internal friction.

Besides that Shimano gives you a lot of room to configure your ride, if available even via Bluetooth and an app. We unfortunately can't go into the details here but there's a hell lot of things you can do. So, the Maxx Huraxdax has never been more individual than it is today!

So, what are the downsides of the 2021 Huraxdax ELS? Well… After more than 5 years of lifecycle and development this bike has come a long way and is really matured. The weight, yes, that's still an issue. But: it's the price for that whopping chunk of extra thrust – and a frame structure that can handle it for a looooong time. You wanna play, you gotta pay. And at least the direction is right: components are becoming lighter generation by generation. The other thing is those rather small rear suspension bearings. These we already criticized last time. Half-assed, as we neither found major downsides in handling nor an excessive wear.

What else? Well, if we may have a wish… Cruise control and a radio or better some hands-free equipment would be nice – this allows you to productively use extended gravel road stretches at a constant 25km/h 😉

Arrived. That's our first conclusion on the development journey of the 2021 Huraxdax ELS. Many of our recent points of criticism have been resolved, the design is nicely straight, the handling just sweet and the range of use is huge. We'd still vote for a lighter eFATFully. But here only time can heal. As of today the 2021 Huraxdax ELS strengthens it's position within the very best FATBikes available. If you can (and want to) wire 6.999,- Euros (including 19% VAT) to Maxx, are looking for a superior eFATBike and enjoy individual solutions you just can't go wrong!