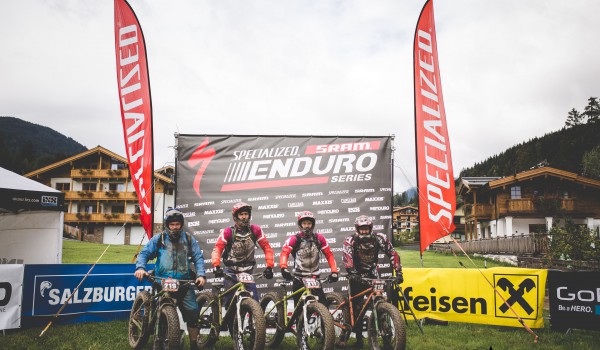 Just nice. The FATBike Enduro Race in word and vision! 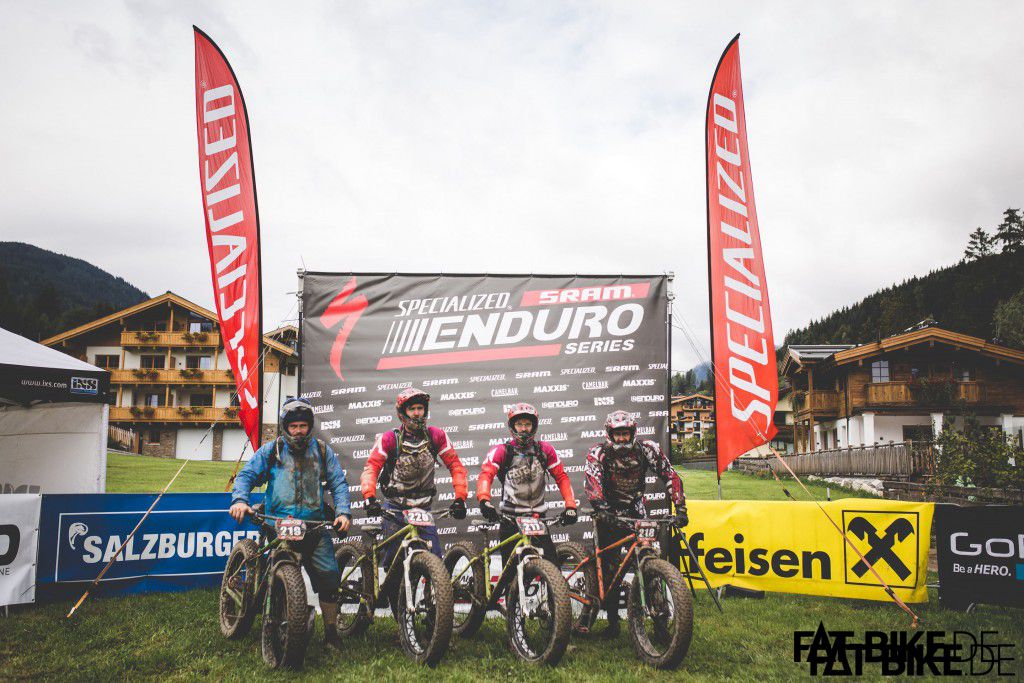 First things first: all of us have survived. ALL!

You think that being an underdog sometimes sucks? Well, yeah, you may be right. As a FATBiker some folks see you as kind of a braindead bike zombie who just rumbles down the trail… That's our mission. No, I'm talking about being braindead – it's about showing the world what we as FATBikers are: a bunch of passionate riders with a clear dedication to fun and adventure.

To show our passion the FATBike Enduro was born: find a team of FATRiders and kick ass at an Enduro Race. Long story short: we succeeded!
Three Musketeers. Fantastic Four. And now: the FAT Five! We decided to form a team of five – read here and here who our race buddies were! And of course there was Barny, the magic photographer who already captured our FATBike Transalp in splendid pictures. 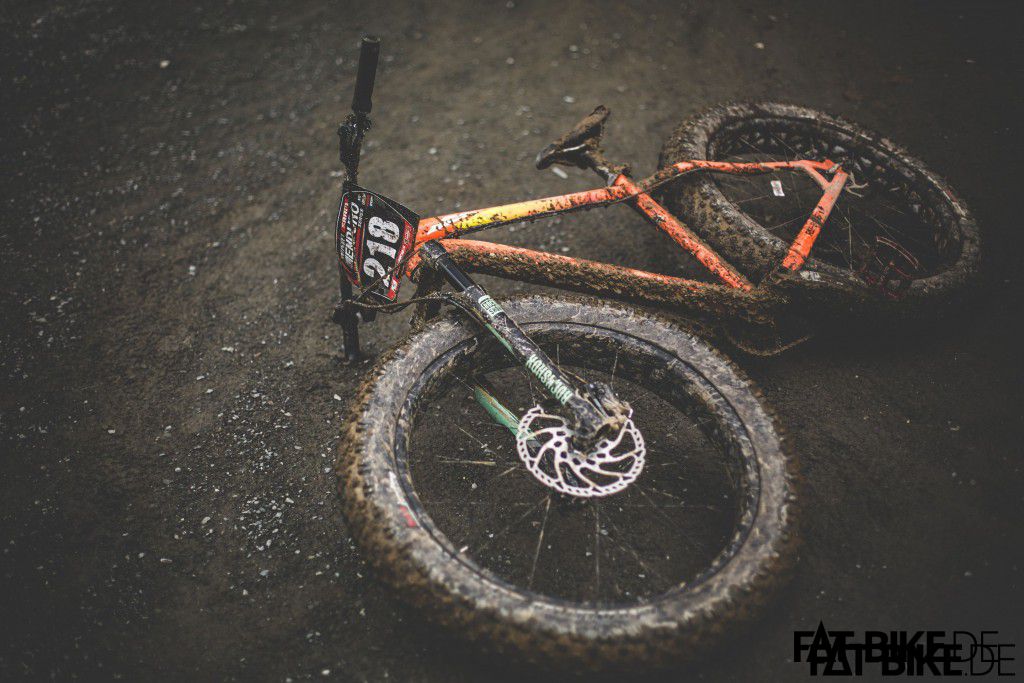 Want so see some dirty secrets? How about this one?

And of course an awesome team is not of much use without proper equipment. Thanks to the great support of Specialized we were racing the latest Specialized FatBoy FATBikes that were all equipped with Blutos and tuned with chunky 200mm Shimano brakes. 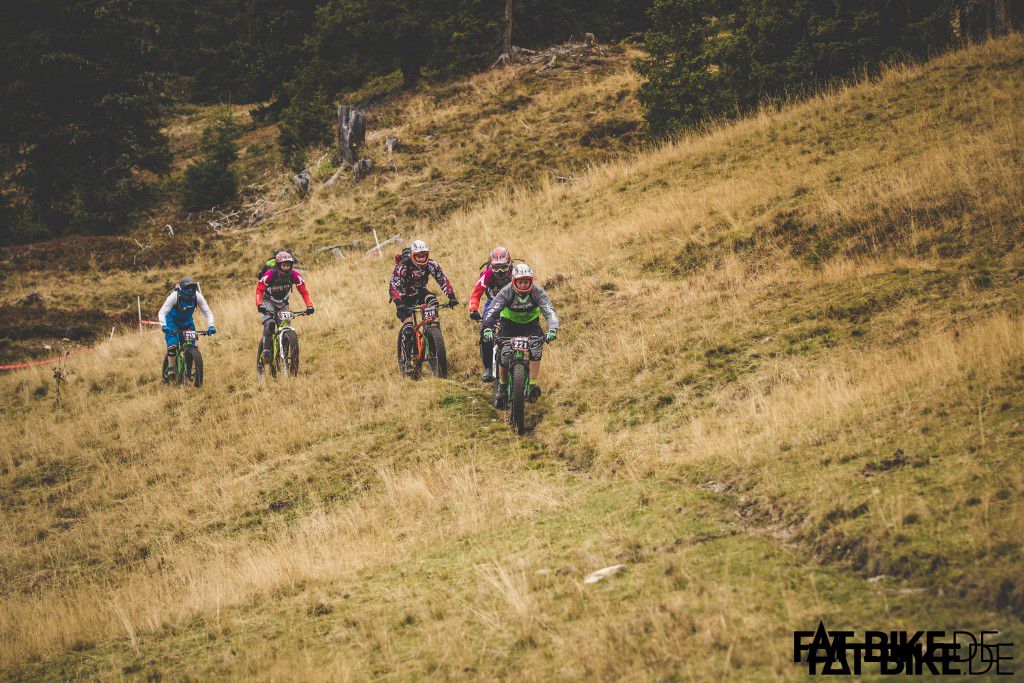 The way we usually do things is: have a great idea but no clue what you are doing. So simply go out and do it. Why change this? So only one of the FAT Five was an experienced Enduro racer. But what are training runs for if not for finding out. So together with Barny and great weather the FAT Five stepped into the gondola of Leogang Bikepark to have some fun. And adventure… The tracks were really awesome. A bit worn and „end of season styled“ but that made them even more interesting. 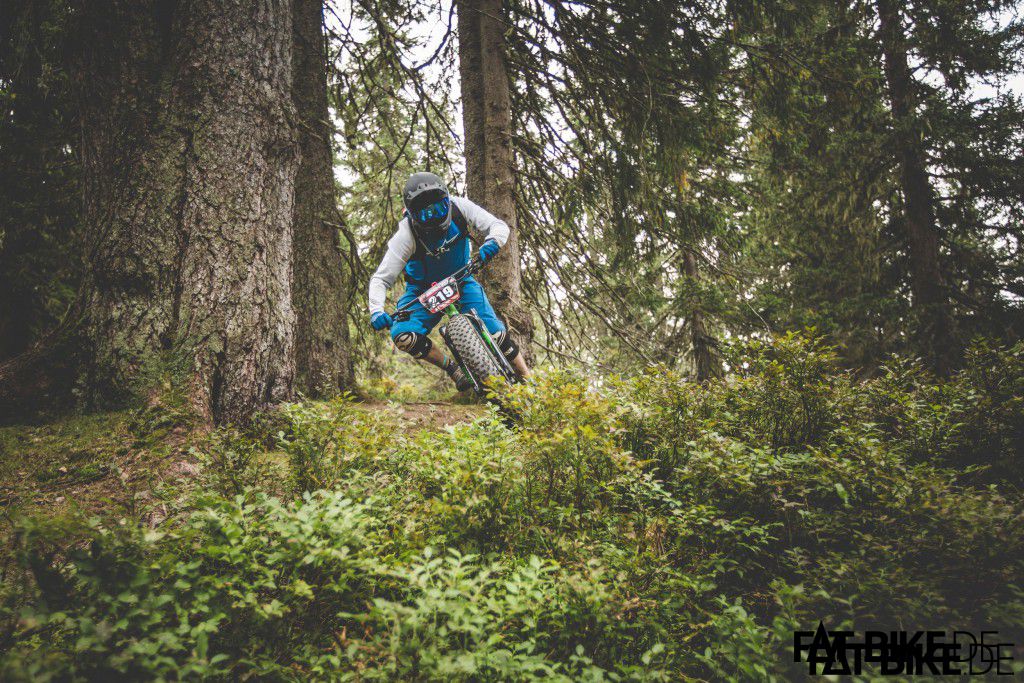 Of course we had some minor crashes – sadly somewhere on Stage 1 Franks flat pedal drilled a deep hole into his right shank! Being made of hard wood he ran the entire 5 stages race track with no visible sign of pain or regret. But in the face of a disastrous weather forecast (which would result in severely dangerous trail conditions) Frank decided to cease the actual race and instead support Barny. 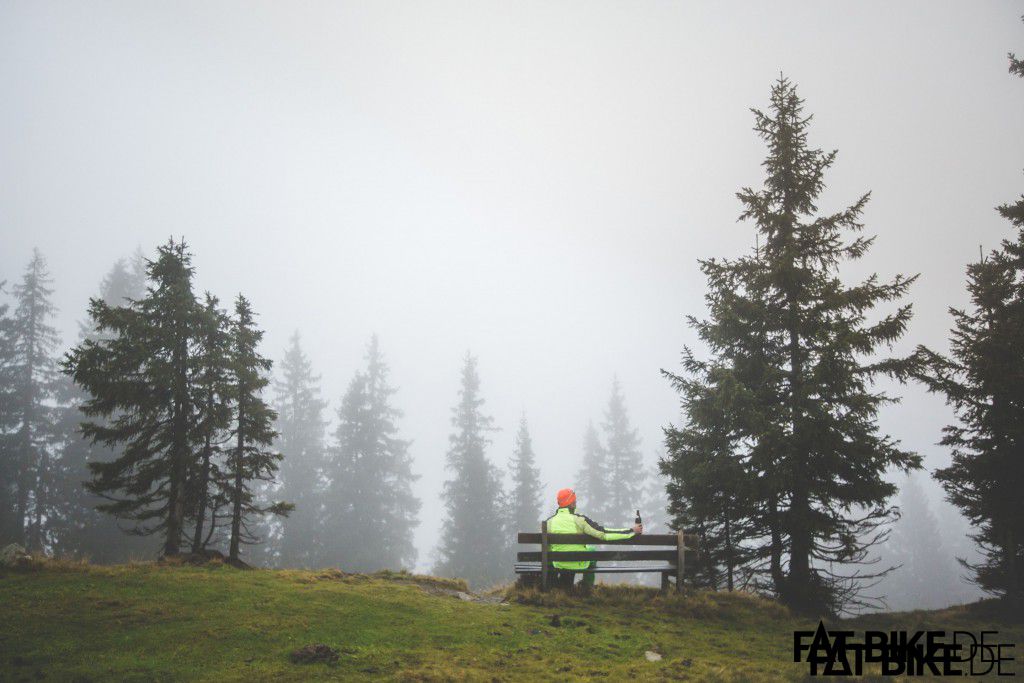 The overall training day was good fun yet sometimes we felt as if we were from another planet. Yet we met a whole bunch of great bikers and the FatBoys always were a good basis for nice chats.

The Race started with a FATBike stage 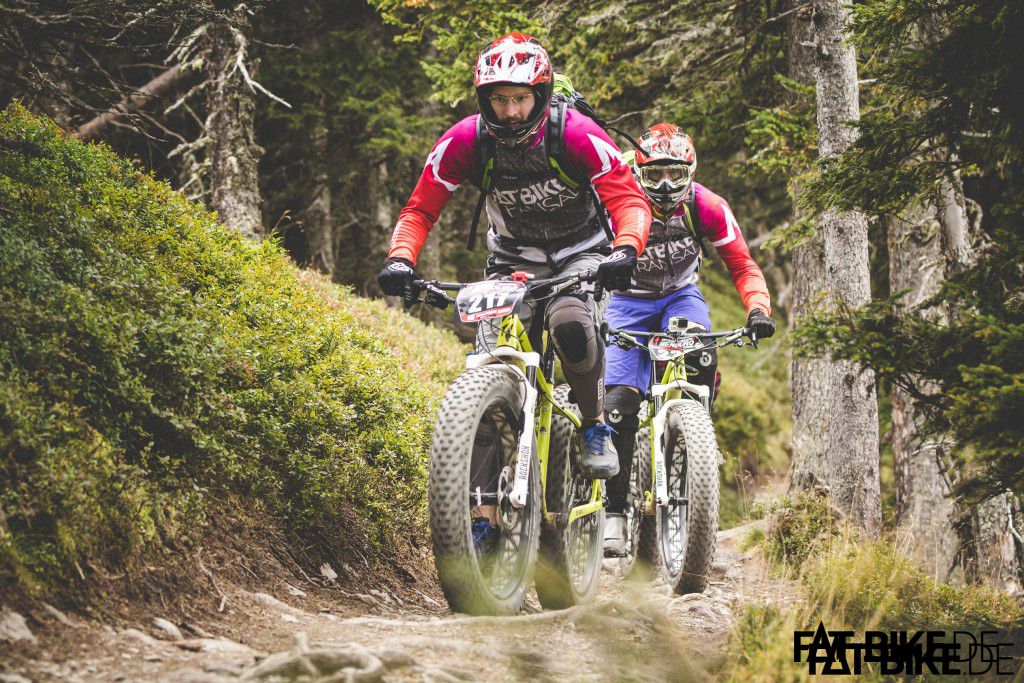 Hunter and his prey? Nope! The FATtest Enduro Team during a training run!

Here's how the race day started: rain. Pouring rain. I saw it from my cozy and warm bed. Really, I don't like it to get up like this. The track which had already been pretty slippery the day before must be a slick hell!
So, we're talking about perfect conditions for a pair of badass 4.6 inch tires!! What we found on Stage 1 was FATBike country! Root spiked trails, mud, wet rocks, a downhill section on alpine meadows and a steep, heavily sinuous single trail through a short stretch of forest. 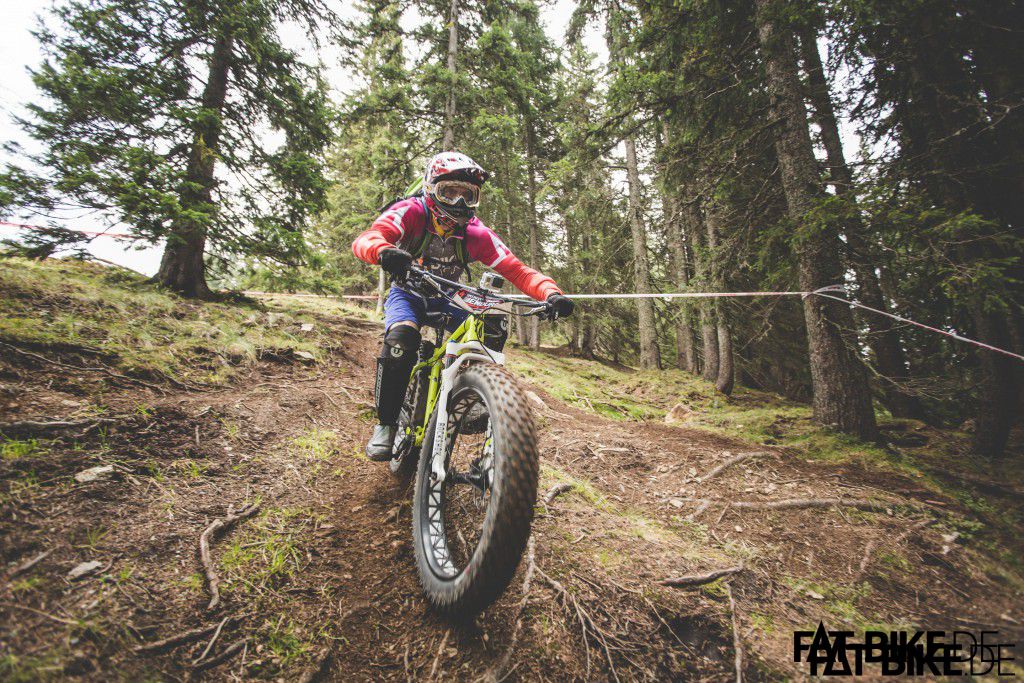 Here the FatBoys felt like home! Our tires provided unrivalled traction and handling. With the precision of a surgery knife the FatBoys followed our commands and where others were fighting to not getting kicked off the trails we could run flat out! So on Stage 1 we had a fulminant opening: out of 111 finishers we achieved the 6th best time! Pretty amazing considering that this time was despite a crash that cost approximately 20 seconds! 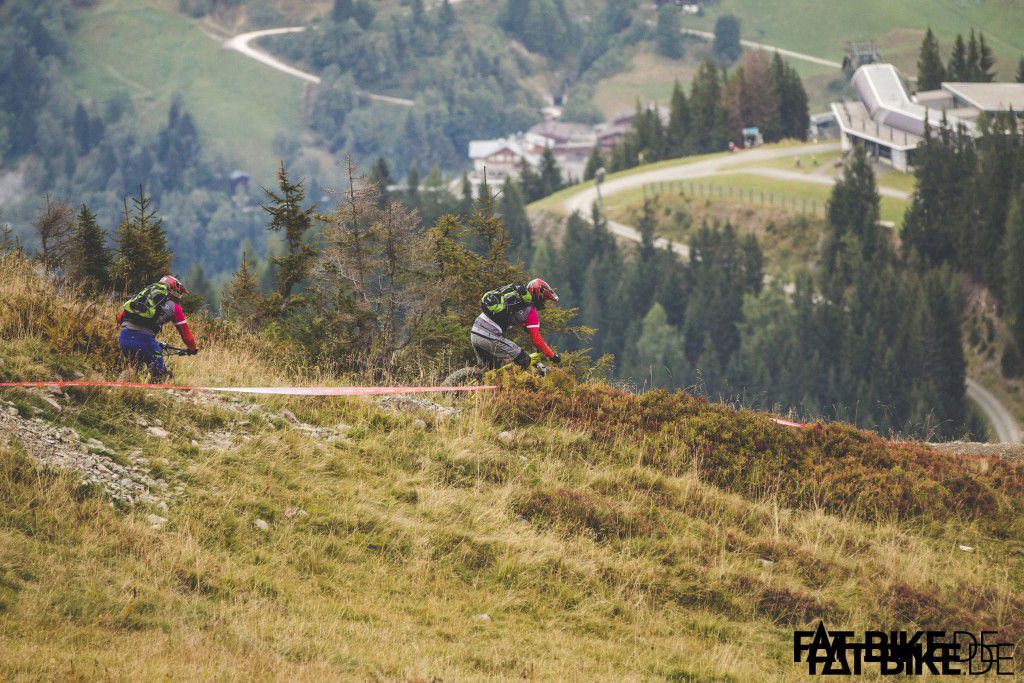 Stage 3: face of an angel but trails by the devil!

The transfer to the next two stages led us along so called Milka Line down to Saalbach where we entered the next gondola. The way to the top boded ill… It was so foggy that even IN the gondola there was a visible amount of fog. Even worse: Stage 2 started off with one of the fastest parts of the entire race! So when we took off the visibility range was somewhat around 25 meters. Top speed according to my GPS tracker: 55km/h. That tells you: when you see it, you hit it! That, and given the loads of sharp-edged stones, forced us to slow down a bit and leave the field to the full suspension riders with their tubeless skinny tires. Frankly spoken Stage 2 and 3, which were formed by the legendary X-Line, were not the perfect environment for our FatBoy hardtails. 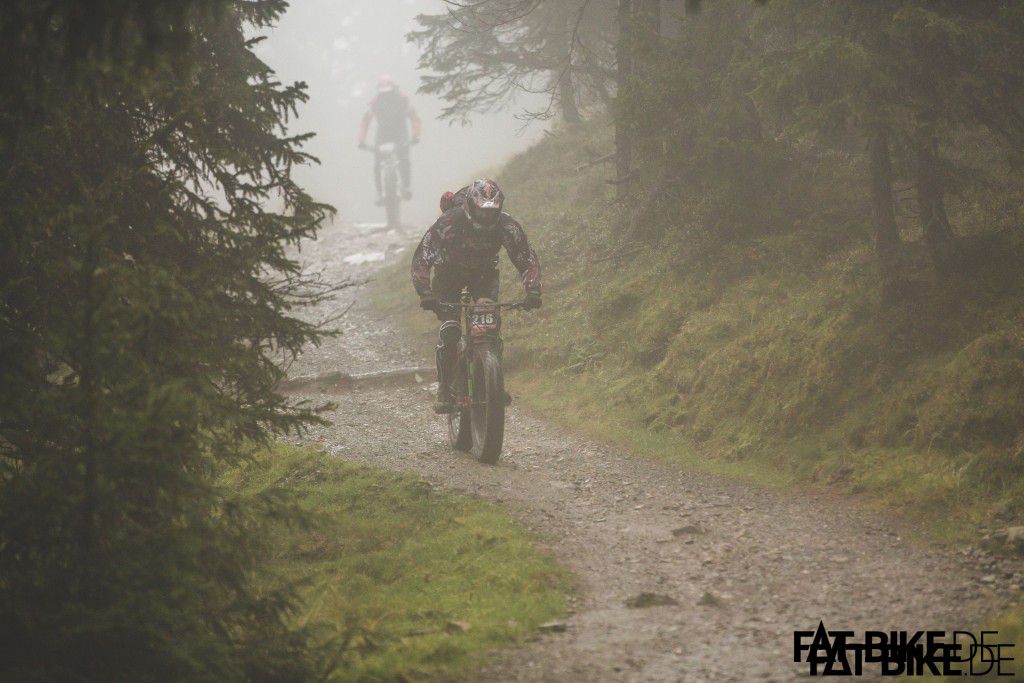 Gorilla – ahem – MARK in the mist.

The biggest drawback however was the tires. Medieval rubber tubes in combination with low pressure are your worst enemy on tracks like this. Maybe a different tire than Specializeds Ground Control Fat might add some beef as the Ground Control is particularly low. But we have to face it: only a serious tubeless application allows full throttle under such conditions… 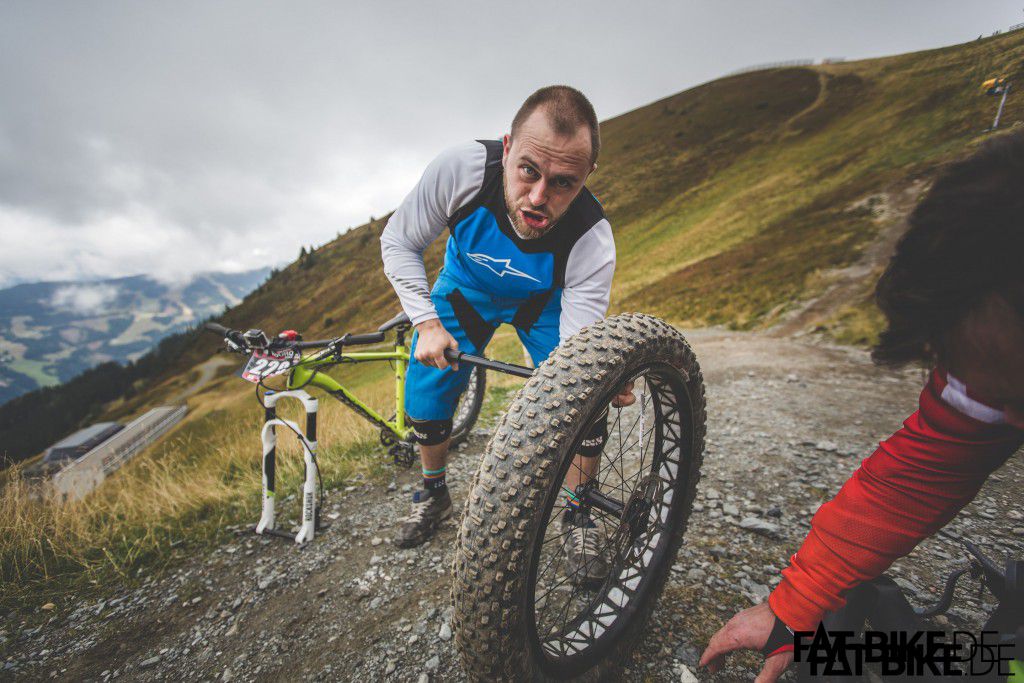 Luckily, however, we had not crash so far. Yet one of us was overtaken by a lady on Stage 2. Of course we will not tell you WHO this gentleman was who deferred her. But be assured that he was the chick of the day!
Stage 3, the lower part of X-Line, then in some sections was super muddy and greasy. The lines our bikes took didn't always match the track. Interestingly this in parts was even too greasy for the Ground Control to control the ground. Thanks grandma for doing the laundry!

Stage 4 led us on legendary Hangman I trail 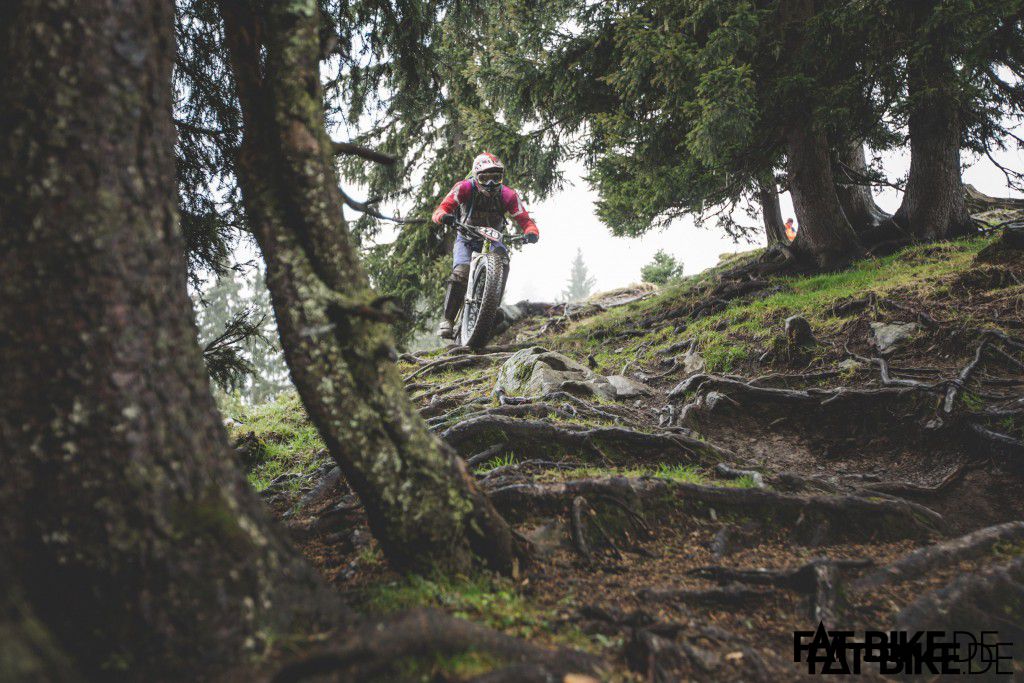 Matt at Hangman I

As we finally arrived a Stage 4 rain had eventually stopped and it was much warmer as on the last mountain (only 1°C degree at start of Stage 2!). And we would now ride the Hangman I trail. It is root spiked. It is narrow. It is twisted. It is fast. It is highly technical. In two words it is: f***ing awesome!!! And it is a tire eating monster. Tell you what: if I'd got one Euro for every time I flatted a tire in my life I would be one rich bastard today! BUT! With this special talent in mind I chose my line and speed wisely and so could enjoy this mind bending trail in all its beauty. 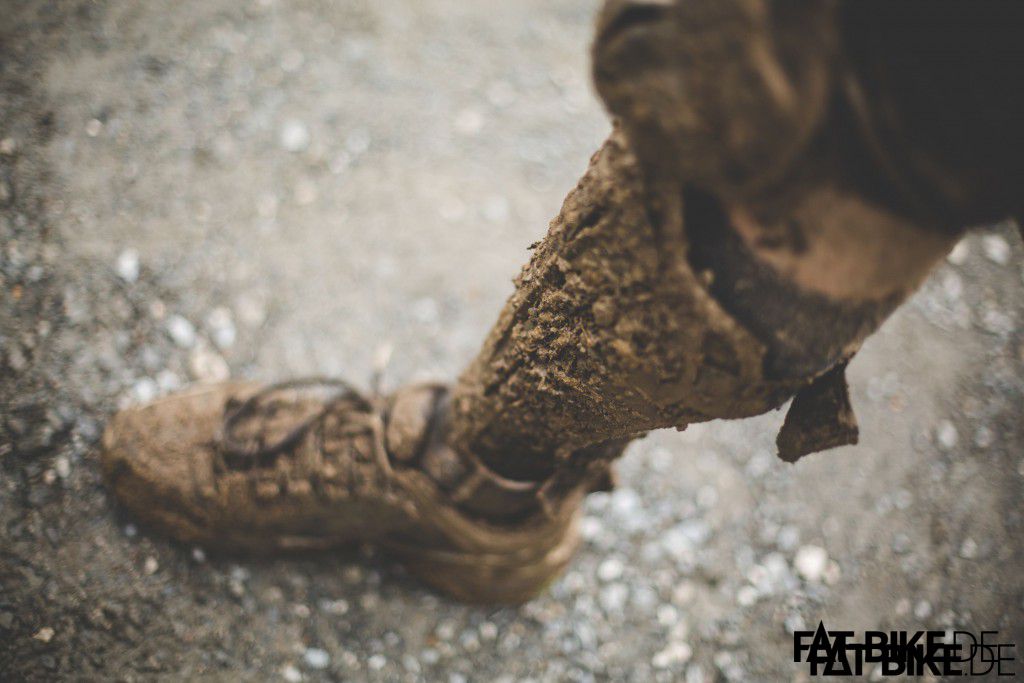 Not so Dan. Welcome to my world! He killed his front tire seconds after he took off into the trail. But we were prepared: each of us had at least one spare tube in his backpack. So Dan fixed his bike in record time and took off again. Just to kill his rear wheel equally quick. Only a few meters (seriously – it was something like 5 or 10 meters!) his rear tire got punched. So he grabbed his FatBoy and started running like Road Runner trying to escape Coyote.
So with that in mind his 109th place (out of 110) appears in a completely different light: he fixed a tire and then ran the entire Stage faster that another guy! FAT!
So for all of you who say „Ohhh, FATBikes are sooo heavy!“: get out you pussies 😉

And finally: a bit of North Shore! 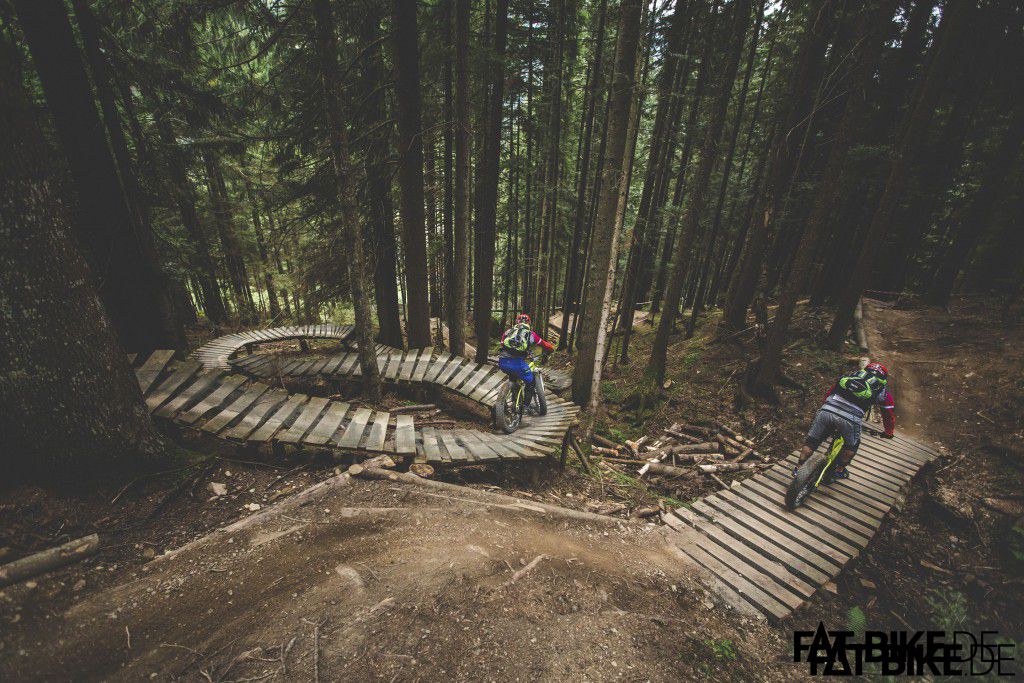 Sadly the left track was not part of the race…

Ahhhhhh… North Shore… Two words that really make us become sentimental… The last Stage, going along „Bongo Bongo“ trail was a bit like riding that one-of-a-kind area in the north of beautiful city of Vancouver.
Here you start right off along some wooden bridges, hover above of some roots and rocks, fly down a hand full small drops and meander through the landscape following a lovely single track. Stage 5 didn't even feel like racing. It felt a bit like a warm brownie with coffee, or like melting marshmallows over a bonfire with your friends. All the stress was gone somehow and we felt like home. 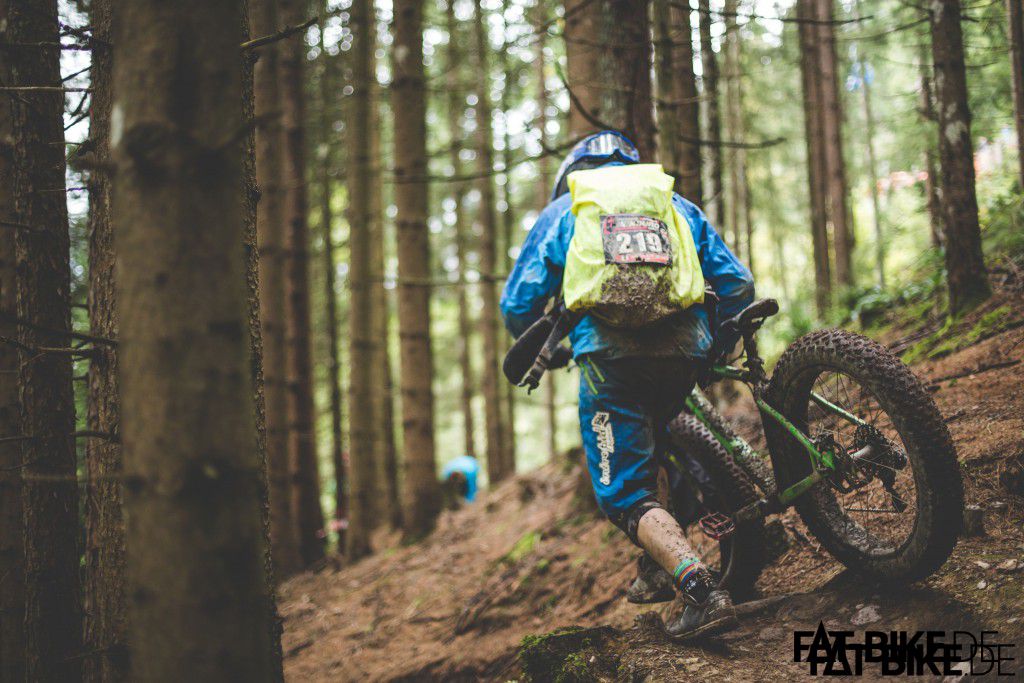 Yet it still WAS a race so we did what we could to succeed! Flat out into the first straight, some heavy breaking into the next corner, turn left, slightly lift the front wheel to softly land the drop and then full throttle! Sadly Tobi's top speed ride was suddenly stopped by a nasty rock biting his front wheel. Again, a tubeless system would have led to much better results.

What about the results? 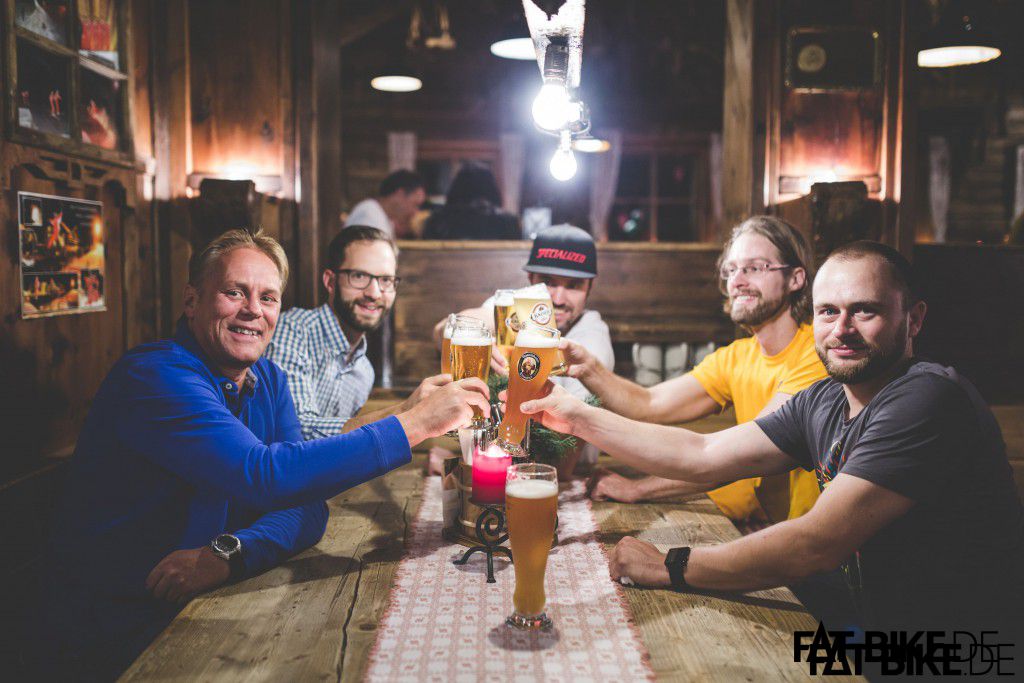 And the winner is… FAT Five!

Seriously – we were not there to win. There are several good reasons why… However, we boasted that we'd go there and spank at least a few full suspension butts. So most importantly we had to prove that we were not just blowing smoke!
Sadly in the end it was only Mark and myself (which is VERY unusual) who survived the entire race with no snake bites. However the best individual result we could get was the stunning 6th fastest time in Stage 1. Also, out of 111 finishers Mark gained the 80th place whereas I managed to land on 60. That's pretty okay for chunky hardtails that roll on tires with the size of an elephant's leg! 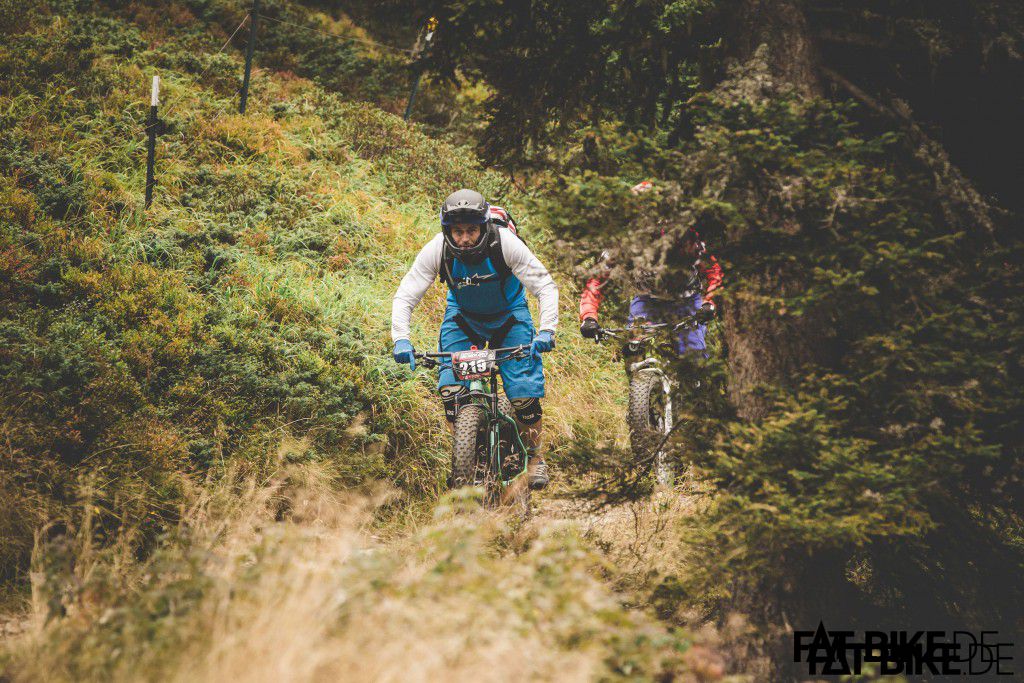 Just theory but worth a thought: without the defective tubes Dan and Tobi would have been well in the 60's as well which would have been a fantastic team result and shows a very constant performance of bikes and riders. 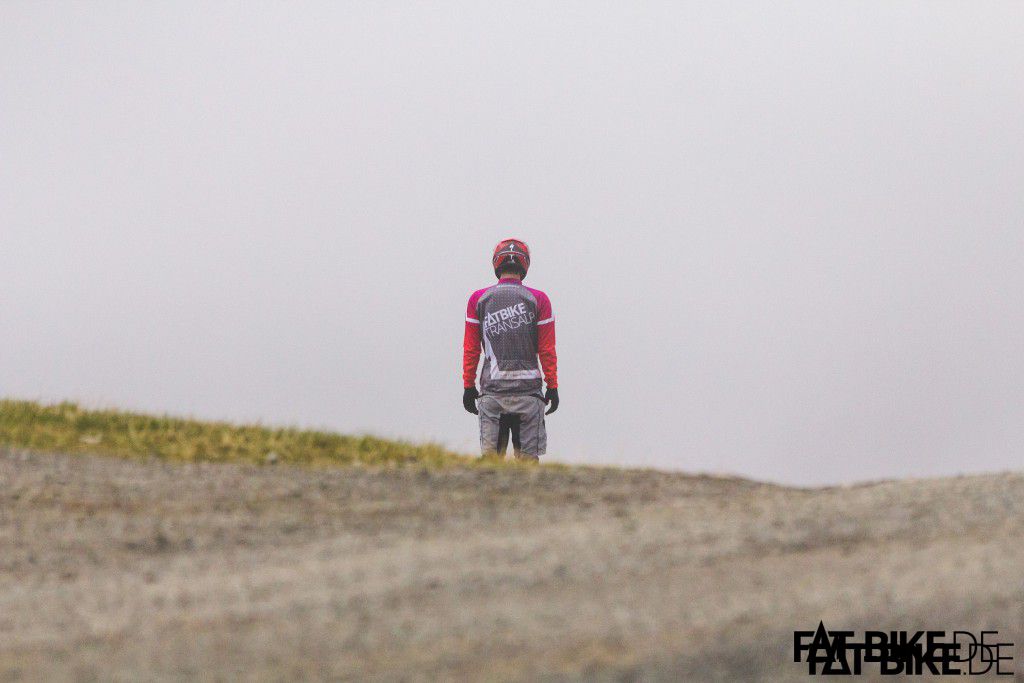 Outlook: foggy with a chance for a FAT Day!

Many have asked us: „FATBike and Enduro – how the heck does this go together?“. The answer doesn't look too obvious – but in fact it is! Enduro is the type of race that is closest to everyday MTB-ing: a bunch of guys pedaling up a hill, chatting and joking and then enjoy a nice downhill or trail section. Again and again. Okay, Enduro Race also means there's a stopwatch involved. But who cares?
So for us it was close to a normal FATBike day with one major difference: we met more great people than usual. 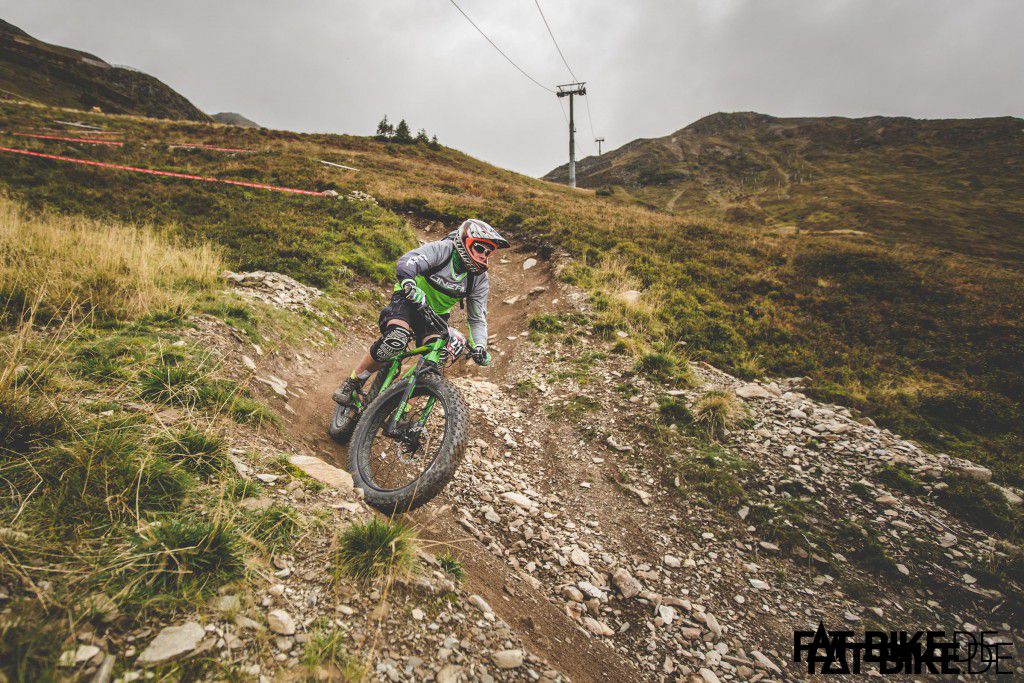 Yet some drawbacks showed up really relentlessly. First and foremost it was the traditional tires. If your equation is „rubber tubes + low pressure + high speed + roots/rocks“ consider to carry a sufficient stash of tubes and repair kits with you. Second are the brakes. During training Dan and I ran on 180mm XT brakes. Forget it – unless you have a death wish. For fast, demanding rides treat your bike (and yourself) with the best brakes your money can buy.

Apart from that the FAT Five could once more prove that a FATBike is everything but slow and bulky. It gives you the full freedom to ride and race as you want to. As per our motto: FAT-Bike.de – overruns prejudice!

Next week we will tell you what the Team thinks about the event!