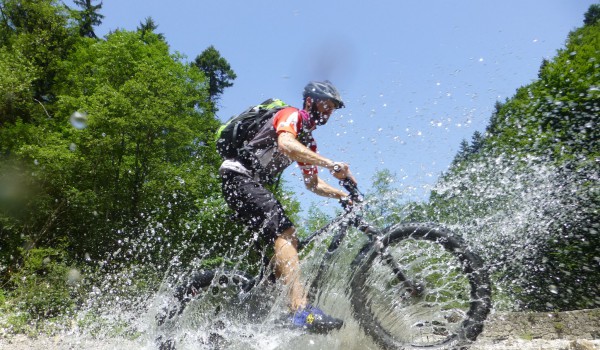 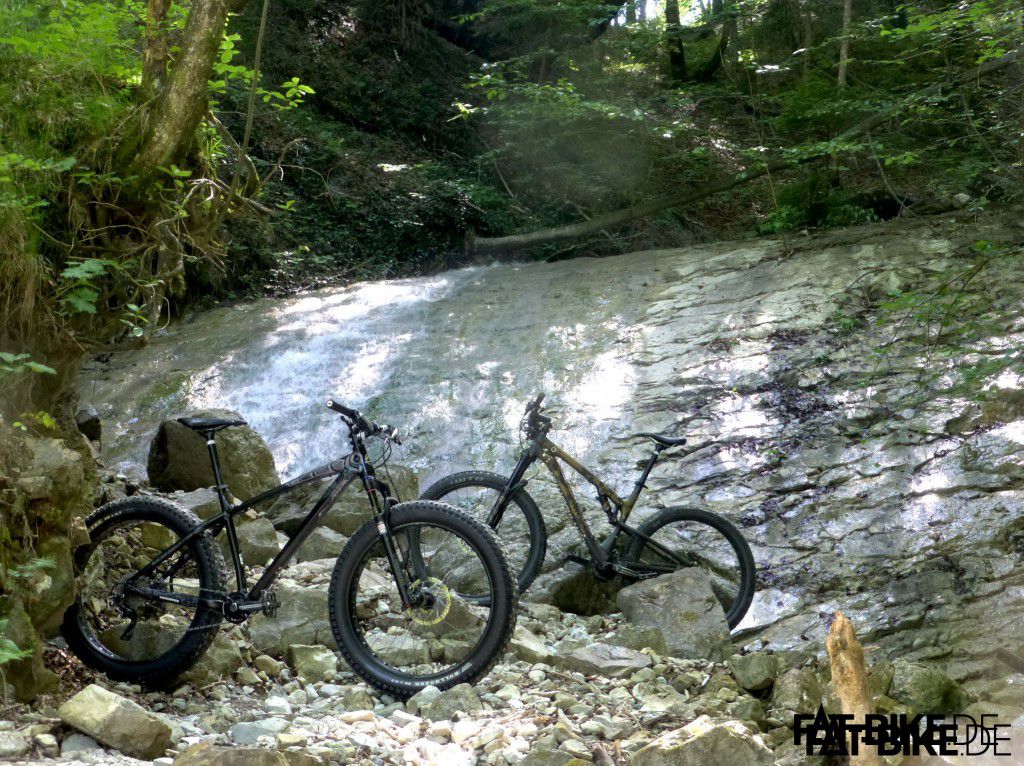 FAT versus PLUS. But they're both „rocky“!

Since the day 650B+ bikes came into the market we've been asked what is best – FATBike or 650B+. Just a matter of taste, maybe?

But besides the fact that intentionally the Sherpa – created as „Overland Bike“ – will be ridden across the same terrain as a classical FATBike comparing them seemed to be a bit unfair sometimes.
And in the end we will find indeed a very clear answer to the question „FATBike or 650B+?“. 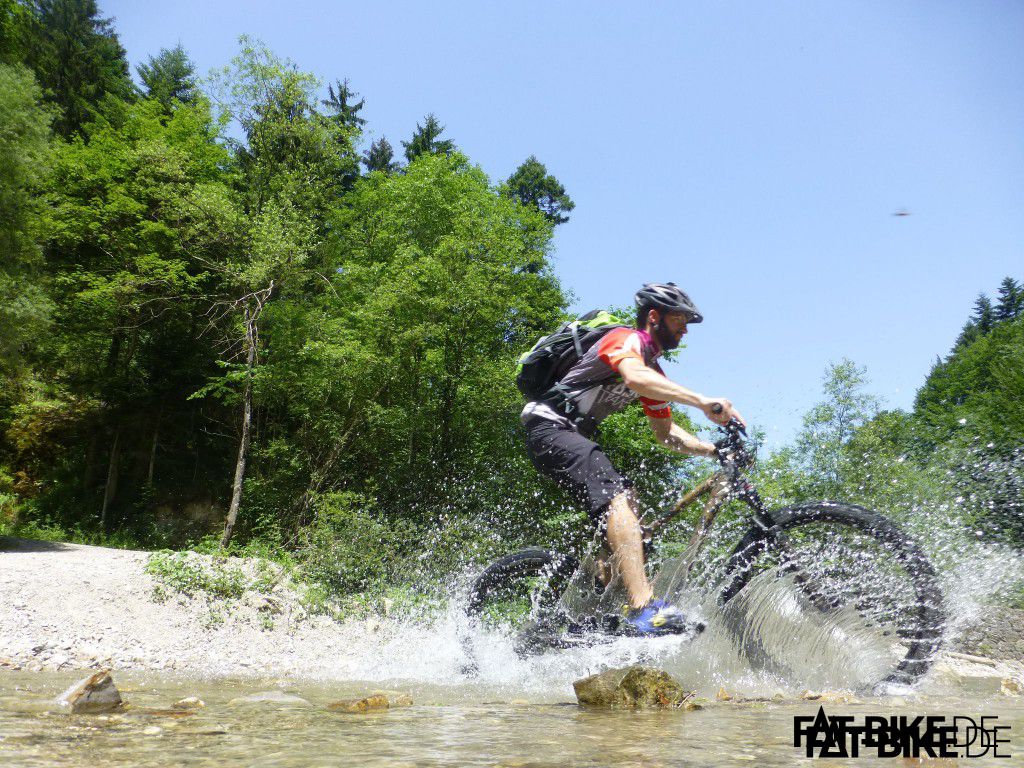 Splash it! Sherpa does well!

Even when ignoring the size of their wheels Blizzard and Sherpa could hardly be more different. The Blizzard is so uncompromisingly „FATBike“ and trimmed to compete in deep sand and snow it has not even got a complete shift kit. Reduce to the max…
However we've checked both models on the same battlefields and took a look at traction, comfort, long range capabilities and general handling.
And what we can say so far: it was goooood fun! 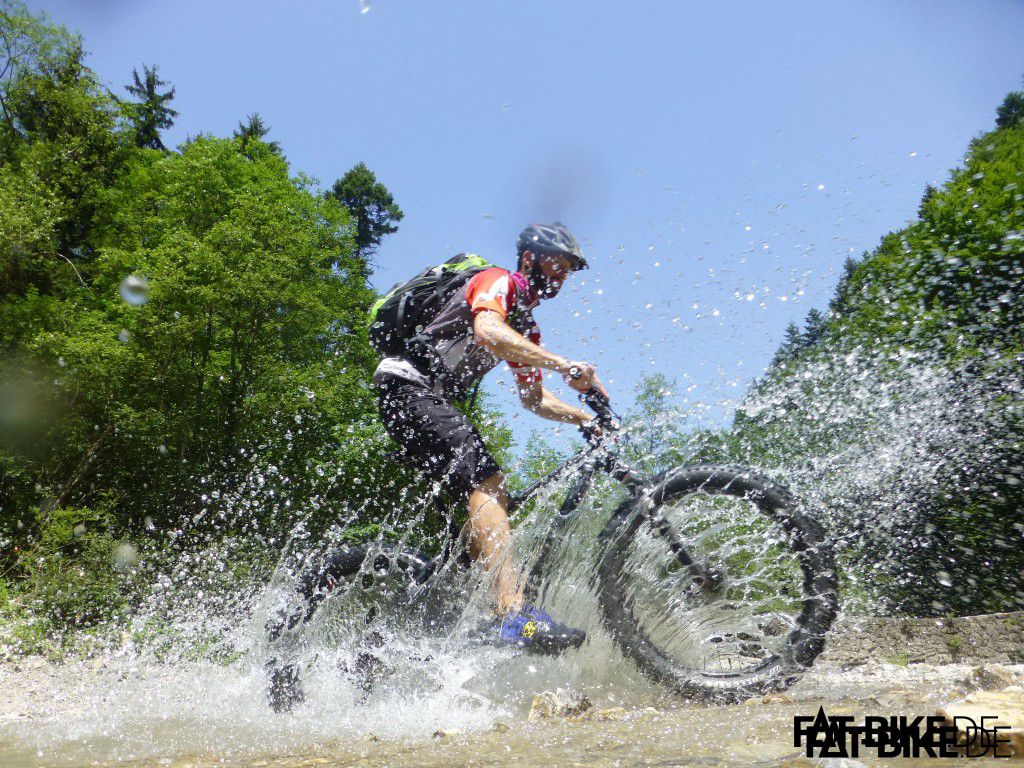 We've mentioned „unfair“… Here we go. In terms of grip and traction no other bicycle concept puts a FATBike over the barrel. No matter whether on slippery uphills, upon cornering or braking – the Blizzard always smashes the Sherpa. Okay, the Sherpa tires are rather designed for sleek rolling however the difference was so dramatic that the Blizzard clearly wins here. And that even though the VeeRubber Snowshoe by far is not „Mr. Traction“… 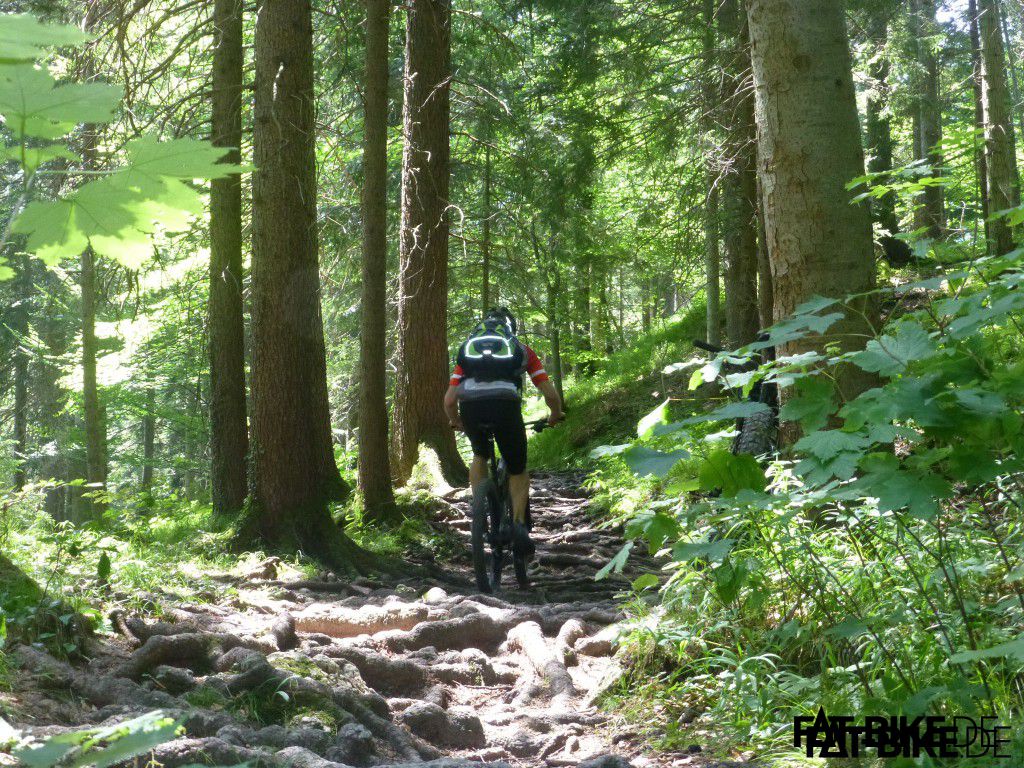 Let's keep it unfair. The developers of Manitou and of course Rocky Mountain have blessed the Sherpa with a splendid top notch front and rear suspension. In particular when riding the tires at about 0.8 to 1 bar pressure the Sherpa literally irons planet earth. No way to compete here for the Blizzard running on it's pretty uncomfortable Snowshoe tires.
However as we didn't want to simply rely on subjective impressions we've quickly developed a new testing method. We placed glass cartridges filled with a vibration-sensitive indicator fluid onto the frames and pumped the bikes over a nasty root-spiked single track.
Then we quickly opened the cartridges and checked the noise: a solid „whooomp“ on the Blizzard, a smooth „shhhhhhh“ on the Sherpa. Yepp, there was definitely more vibration riding the Blizzard. 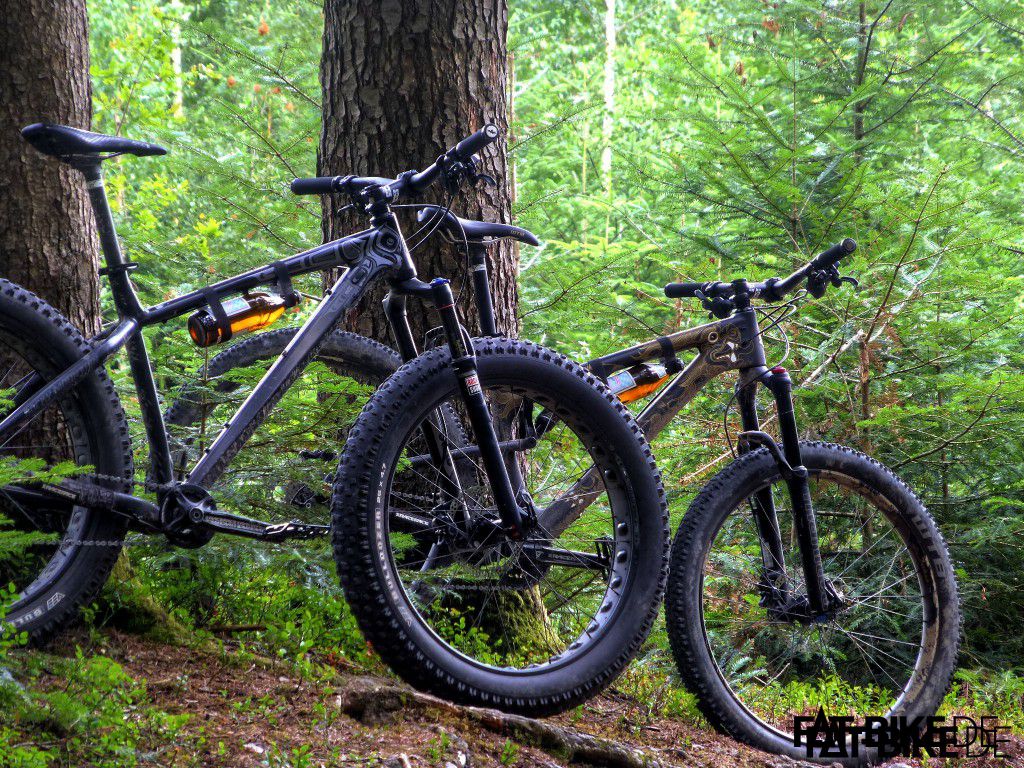 Okay, this is a brand new test and we're still calibrating… However it proved our first impression. And as the indicator fluid can't be re-used we professionally disposed it right on the spot. Cheers!

But seriously. The Sherpa wins. Solely because it's a great full suspension bike. A hard tail 650B+ wouldn't have much to set against a FATBike tire.

On extended tours the construction fails… 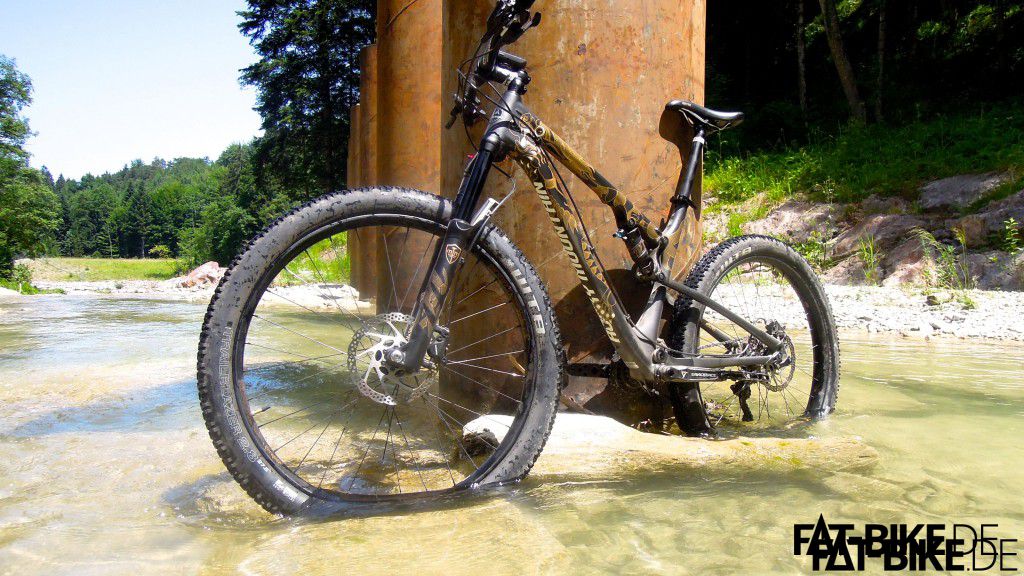 The fact that FATBikes are well capable of running even on long, long tours should not be surprising anymore. However with your Rocky Mountain Blizzard you can forget about it. It is not so much the bike. The nicely made frame has all mounts and hangers that are needed to fit a proper gearing. Sadly those are unused on the factory build. The 1×10 shift kit is set up on a 11-36 rear sprocked paired with a wispy 28 teeth chainring. Frankly this makes a meaningful comparison with the Sherpa impossible.

So the Sherpa sort of wrongly leaves the Blizzard in the dust. We simply took one of our own FATBikes to send a fully fledged one into the fight. However the Sherpa still is one step ahead. And the share contributed by the wheels – we're still discussing „FATBike or 650B+“ – is big here. Rolling resistance is low, steering feels more nimble than on the Fatty. In best case a Schwalbe Jumbo Jim 4.0 can compete here. Yet this point clearly goes to the 650B+ corner!

Handling: a matter of usage 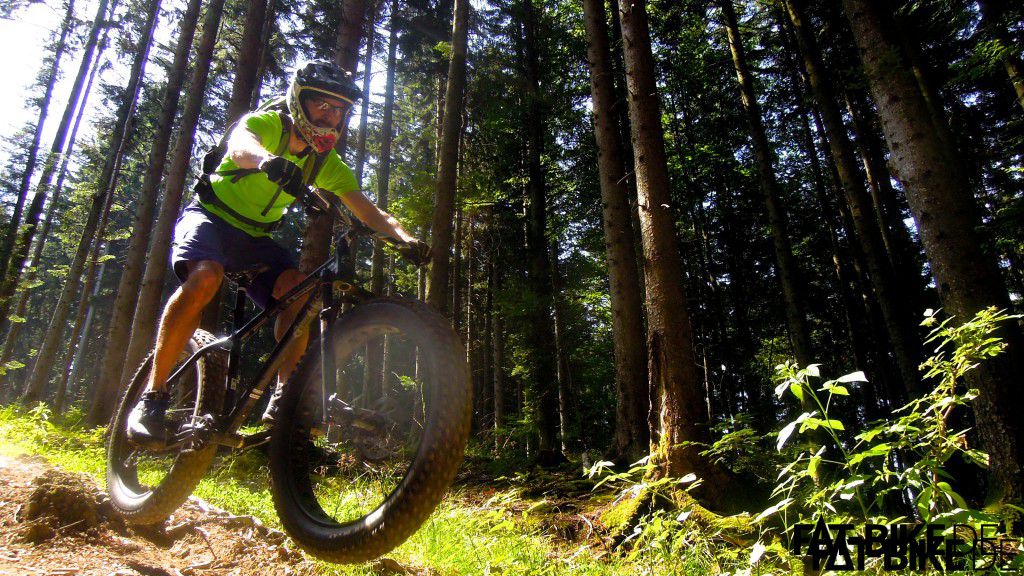 With „handling“ we describe the general feel of the bike. How precisely does it follow your instructions and how well does it work under extreme conditions? But it's hard to derive such general features from our test bikes as „handling“ is very individual per bike and build.
So we'll try to aggregate things a bit more abstractly. Thanks to the rather lightweight wheels 650B+ feels more agile and nimble than a FAT tire. In turn the heavier FATBike tires tend to run much more stable on high speed gravel tracks. On fast cornering or heavy beaking FATBike tires provide much more reserves which allow insane maneuvres. On the other hand a 650B+ tires clearly tells you when it's limits come close. Particularely in narrow serpentines it takes some experience to avoid an „overdraft“ with your FATBike which means the front wheel will stop immediately and you will take a nice header into the brushwood.
On a 650B+ bike the front wheel will start slipping much earlier and lets you know it's time to slow down.
Same is on hill climbs, steep descends, etc. – here the FATBike is something you can really work with and rely on. You can navigate dead on target and keep on track much longer than with a 650B+.
Overall we think that the handling of a 650B+ bike – at least in case of the Sherpa – is  much closer to a standard MTB than it is to a FATBike. There is no winner here. It's a matter of usage. And indeed a matter of taste! 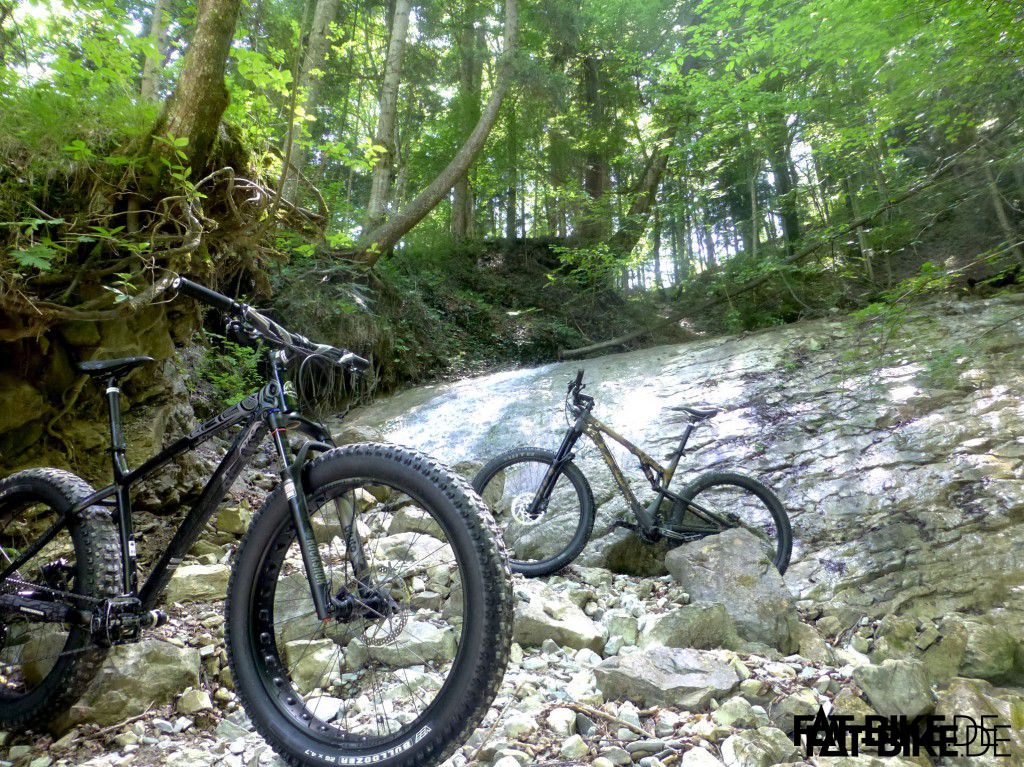 Either? Or? May we suggest: AND!

FATBike or 650B+? For us this question does not get to the core of the matter. A 650B+ is not a FATBike with skinny tires. It's a boldly tired MTB. In fact 650B+ resolves some of the biggest issues modern moutainbikes have. It has the strength and durability of a 27,5 inch wheel (given the wide rims even more than that), the rolling circumference of a „Niner“ and a bit of comfort and traction of a FATBike. And all this is paired with a fair amount of weight. It's a bit like taking the best from each world.
Sound awesome? Yeahmmmm, maybe… There's one thing you don't get: a FATBike. Endless traction, unrivaled rolling comfort (due to the complete lack of unsuspended mass), the unreached ability to roll over snow and sand and simply the opportunity to do the most extreme things – all this needs a FATBike.

So as a result we tend to re-formulate the initial question „FATBike or 650B+“ to „FATBike AND 650B+?“. Simple answer on that one: yepp, makes sense!