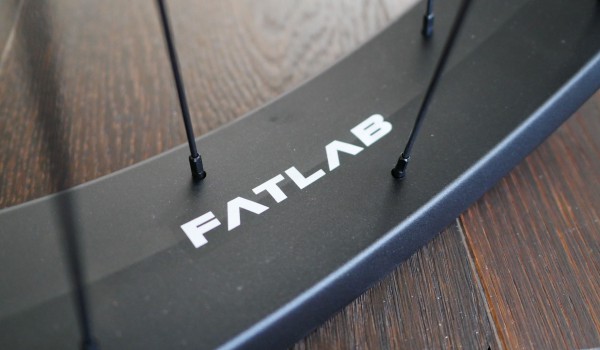 The FatLab FATBike Wheelset – FAT all around! 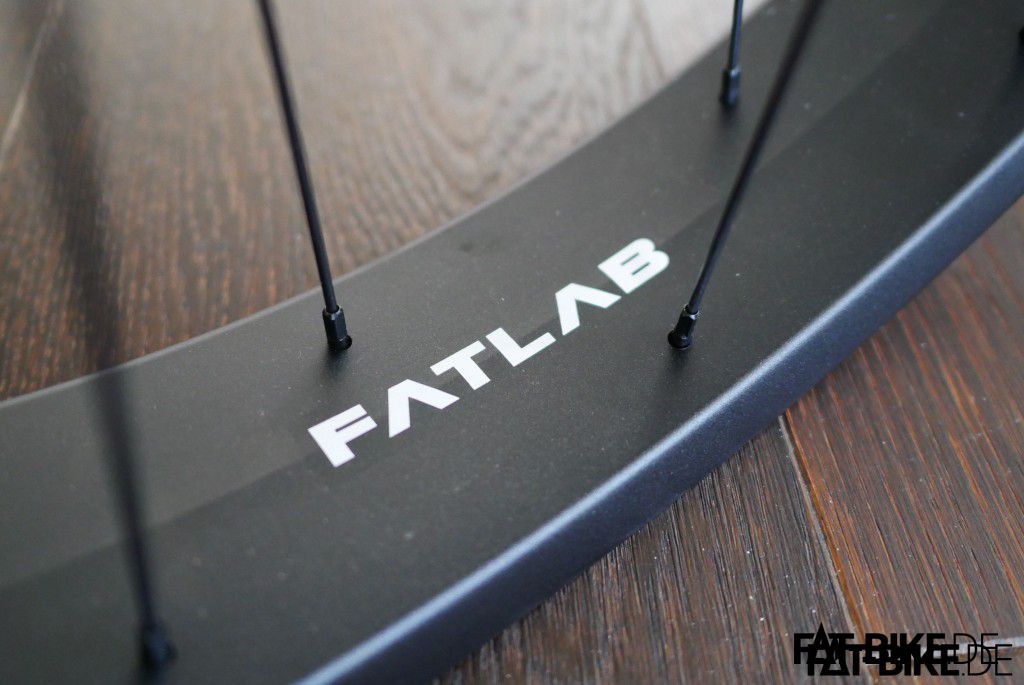 FatLab… Dammit! Why don't WE have that awesome name? But Marvin from FatLab apparently was quicker! Let's see what he makes out of it ;). The FatLab FATBike wheelset is our next candidate to be presented as part of our series about FATBike wheelsets. And once more we have a fine piece of engineering in our hands. How fine? We'll tell you soon. This time we won't bother you with our highly unprofessional tubeless ready scale – you will find it here, here and here.

Moreover we added some direct links to our partner Alex* and as usual they're all highlighted with „*“. 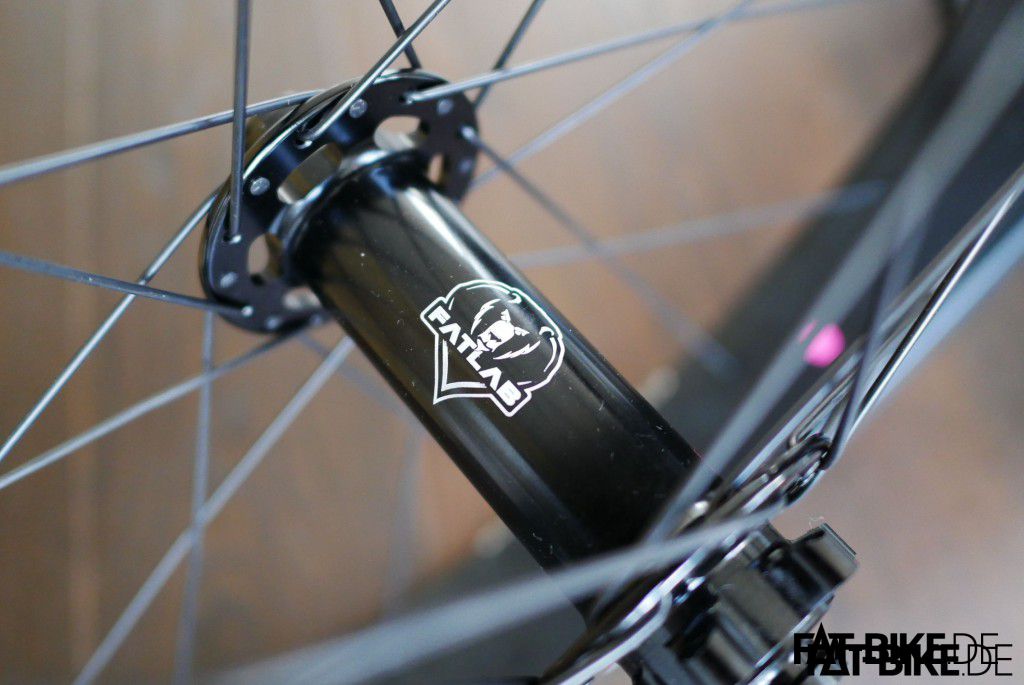 Gee! They also have a great logo!

FatLab is one of those companies that have been investing their brainpower into FATBike wheels and other stuff for years and years. And even though their name might not be in everyone's head FatLab wheels or at least parts of it are already part of stock equipped FATBikes, such as MAXX. FatLab even has a greedy carbon rim in stock. Sadly we're not talking about this one. Today. Marvin – got the point??? 😉

We've received the aluminum rims wrapped around 150/15 front and – a rather rare one – 170/QR rear hub. But don't worry – you can have nearly every combination to fit your machine! This directly leads us to chapter one: 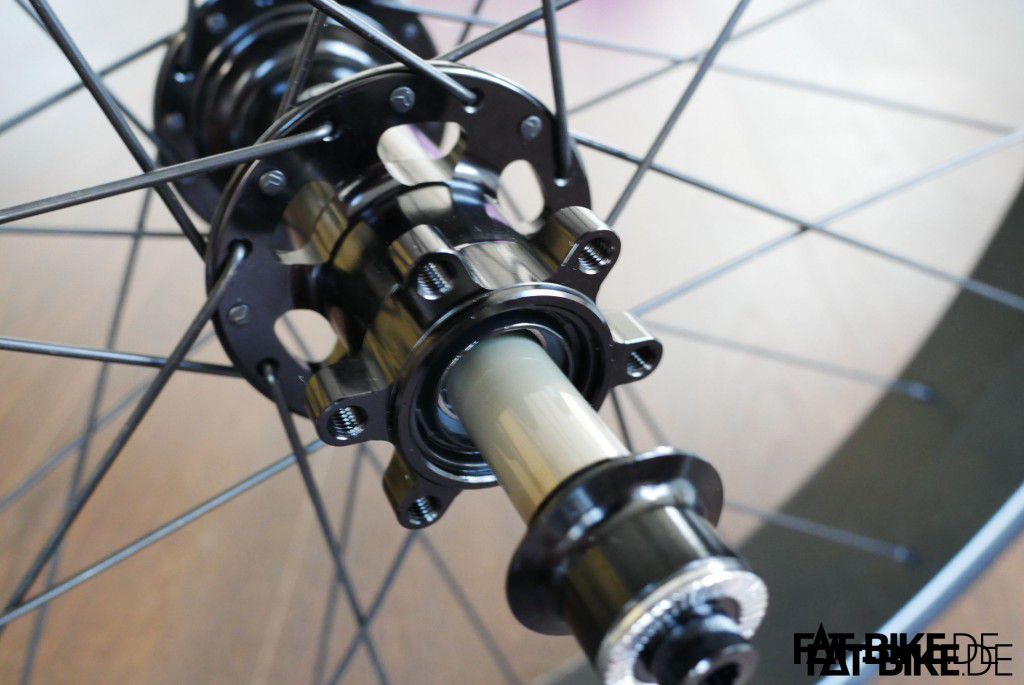 FatLab trusts into two separate „basic“ bodies for each, front (135 & 150 mm) and rear (170 & 190 mm) hub. Exchangeable axle end caps do the rest: each body can be transformed to fit practically all modern FATBikes. Moreover you can have your cassette body for Sram and Shimano systems as well as you can choose from aluminum or a ChroMoly option. As most other brands FatLab relies on six holes brake discs; there is no Centerlock compatible option available. 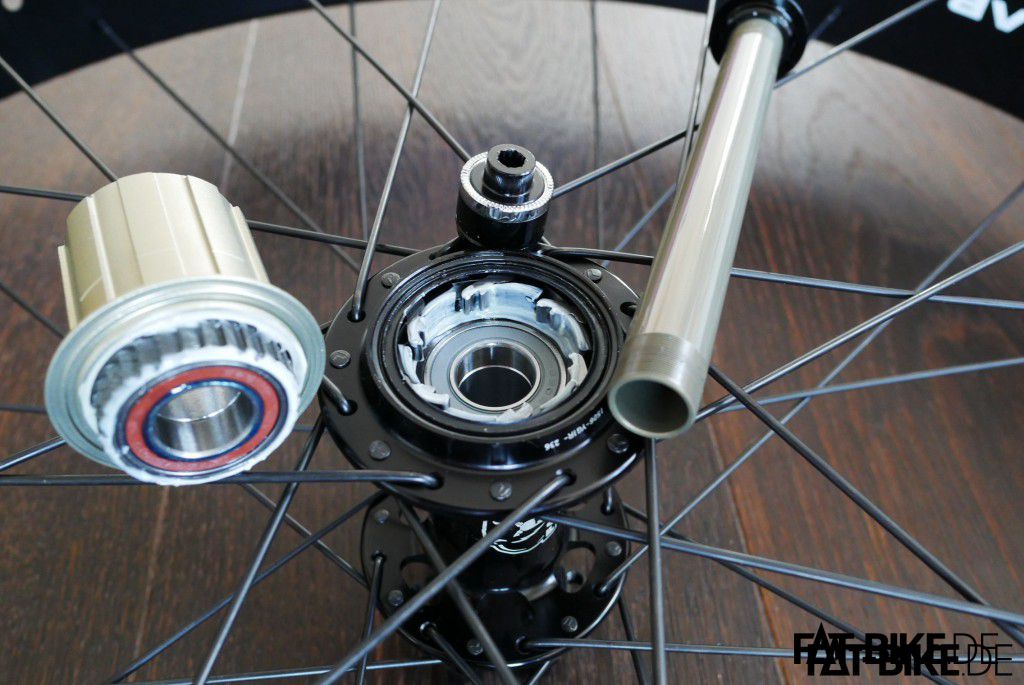 What a three stars dinner they serve!

Hubs, spokes, rims. And in between there are plenty of good ideas. FatLab has chosen a hub design that gives rather flat hub flange angles and thereby supports strong and resistant wheels. Also, all (!!) spokes are of the same length. Good news for all the expedition riders out there: you only have to take one size of spare spokes with you! Spokes and rims are tied together by brass nipples. This means you have more weight where it hurts. However FatLab chose this option by purpose as brass, unlike fancy aluminum nipples, is resistant to salt. This becomes important if you choose to ride close to (or in/on) the ocean as well as on salted winter roads. 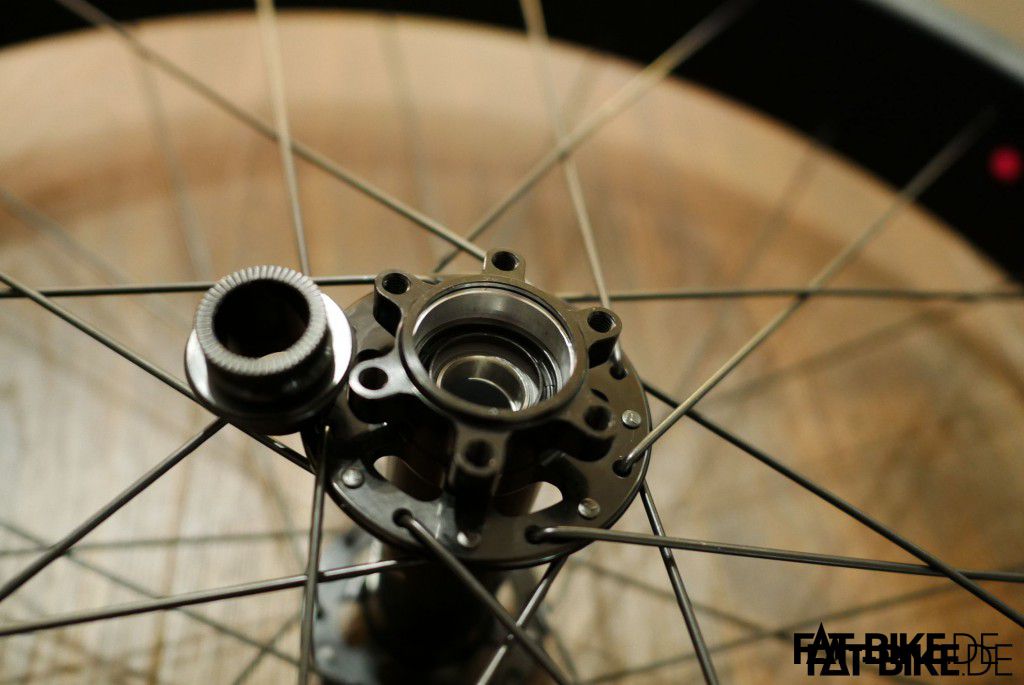 O-ring plus lip seal. No way to get in!

The hubs themselves are kinda old friends. We had pretty similar ones being part of the Halo wheels. However they were not simply re-branded but specifically modified – as said for the flange angles. Still, the technology inside is mainly identical to Halo, including the awesome inverted ratchet mechanism and cartridge bearings (due to a lack of visible specifications we unfortunately could not verify their origin).
The rear hub is equipped with four cartridge bearings only, however we assume that this is due to the smaller size (170 instead of 190) of the hub. Whereas the axle is made from lightweight aluminum and features the same fine pitch thread that hold the end caps tightly in position. All 190mm hubs are equipped with stainless steel axles for improved stability.

A whole bunch of O-rings and lip seals will ensure that the cartridge bearings inside the hub will have no idea about the outside weather conditions. Over all we can again say that FatLab hubs belong to the best hubs you can currently buy*. 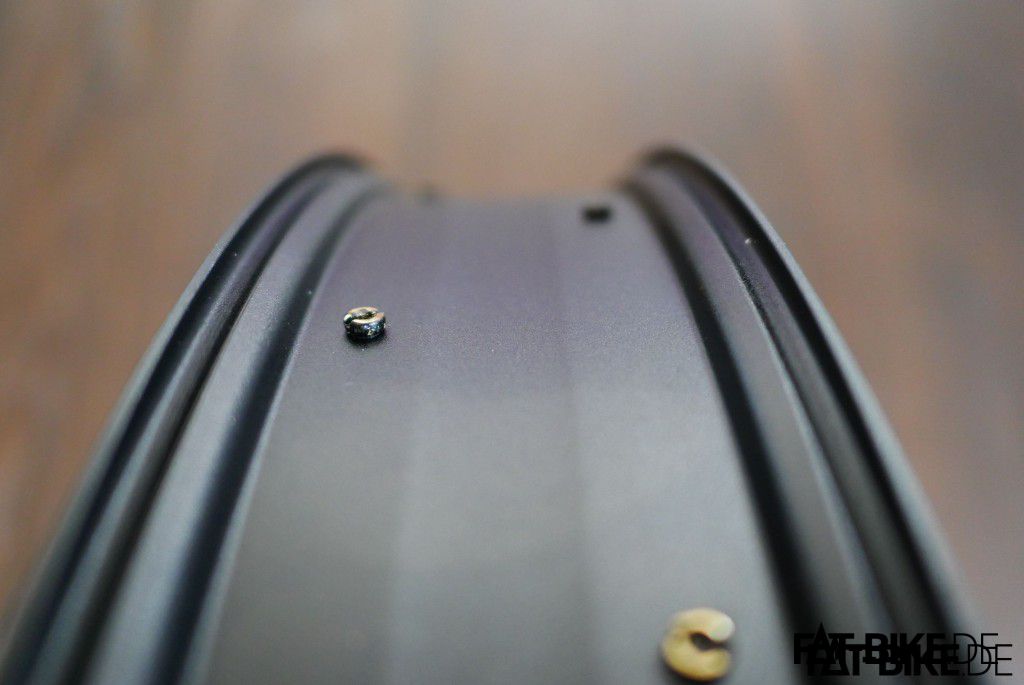 Let's talk about the rims. What a great idea it would be to cut a huge whole into a submarine. NOT! Sure why: this thing must be perfectly sealed to do its job. Same thoughts at FatLab: they consequently avoided fancy cut outs for their rims. As Marvin says: „Our rims are light even with no holes in them!“. So, the single wall aluminum rims are well prepared for tubeless installations. We'll tell you more about this just in a bit.
Rim edges are solid 2.4mm thick which should help to avoid both, snake bites as well as bent edges. The 80mm rim designs support a sleek handling and offers a wider range of potential tires to choose from compared to wider rims.
A very rare feature that can be found on the FatLab FATBike wheelset is the number of spoke option. Standard is 32 spokes; however you can have 28 and 36 as well.
Ah, and whilst we are talking about spokes: the spoke holes are drilled with a sound offset of 20mm (40mm row to row). This supports flat angles and lowers lateral forces that hit the nipples.
By the way – FatLab rims are sold separately*.

According to Marvin from FatLab all FatLab FATBikes wheelsets are from now on build by American Classic to constantly ensure a high level of quality. 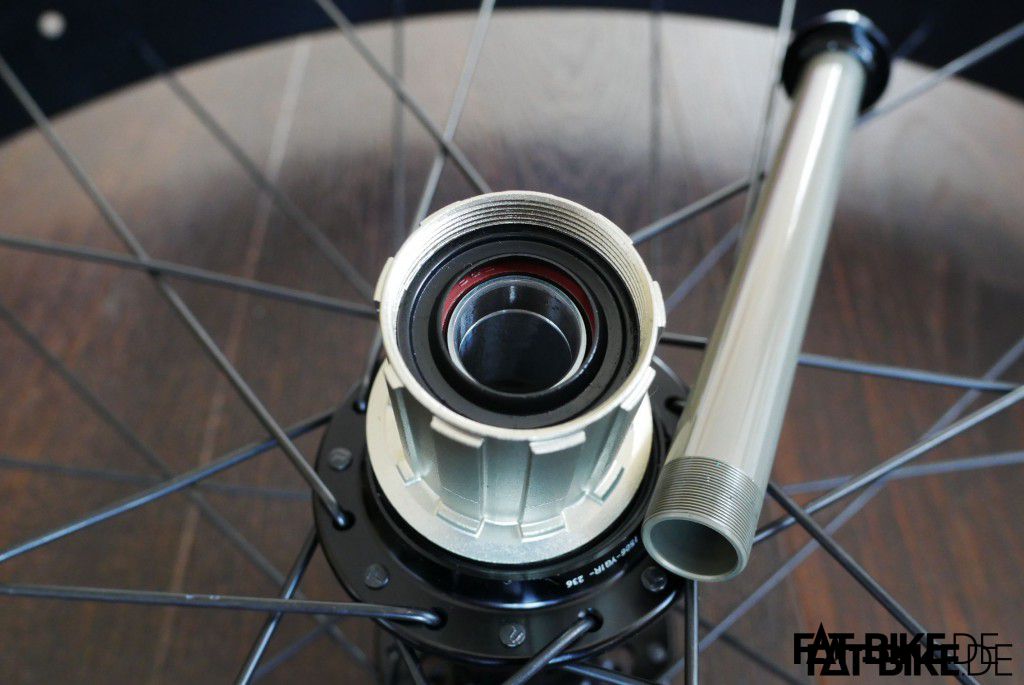 Both, axle and cassette body are made of aluminum in this case.

Upon the first sight you can hear your inner voice scream „Boy, those wheels are HEAVY!“. But – it's wrong. Again. The FatLab wheels are not particularly light weight but can easily compete with heavily drilled competitors. Their monolithic design is inspiring confidence. The satin-finished rim surfaces look really noble and the anodization gives a high quality impression.
The hubs are equally well finished but come with laser logos. This feature will be available on hubs as well very shortly. The bearings run silky smooth when new and we'll maybe run a permanent test with later a bit later in time.
Overall the FatLab FATBike wheelset undoubtedly leaves a very good impression. 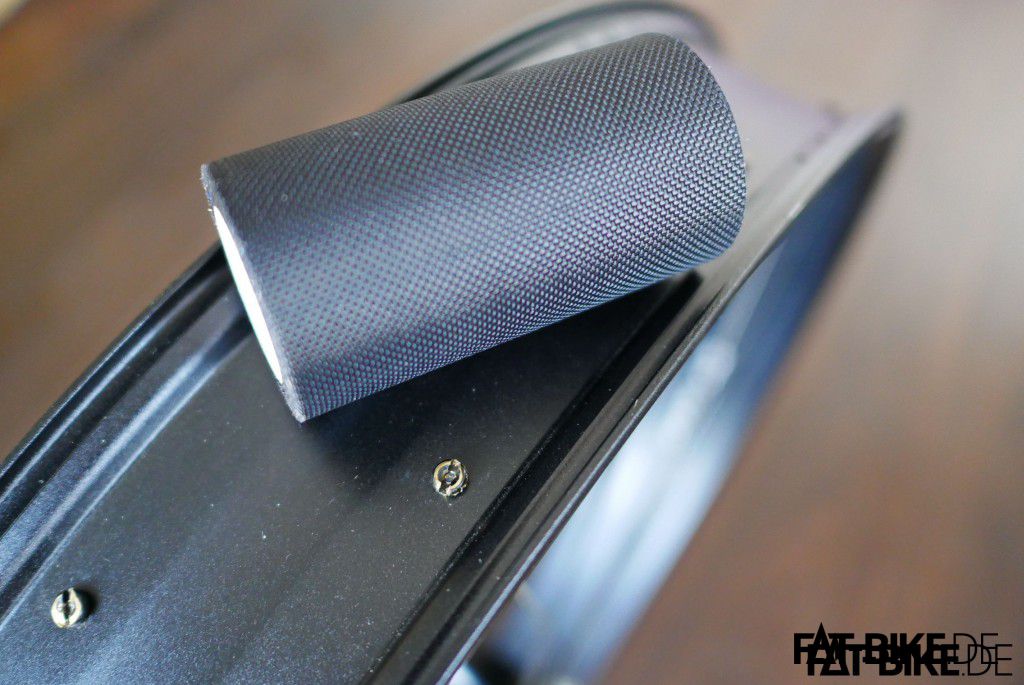 95%. Ahem… What? 95%? We don't have that! Well, yes, now we do. Actually we made a minor mistake and should have given 110% to Sun Ringle. Why? Because their FATBike Wheelset comes as out-of-the-box-ready-to-go-tubeless-kit that includes valves and even sealant. Now, the FatLab FATBike wheelset is not THAT luxuriously equipped but it's equally suitable to be used tubeless. The very tape that comes with the wheels is not intended to seal them off but is just a stick on rim tape. FatLab advises to use an additional layer of duct (or duck) tape. Based on information we got we would also advise one more layer of stiff plastic rim tape between rim and sealing tape to avoid the nipples from digging through the sealant layer.
On top of that the rims are equipped with bead humps to secure the tires in position. So, technically it's all there to enjoy a tubeless life.
We will give the missing 5% once all required ingredients are on board as currently you still have to buy additional stuff to get it going. As far as we know FatLab is currently preparing the update! 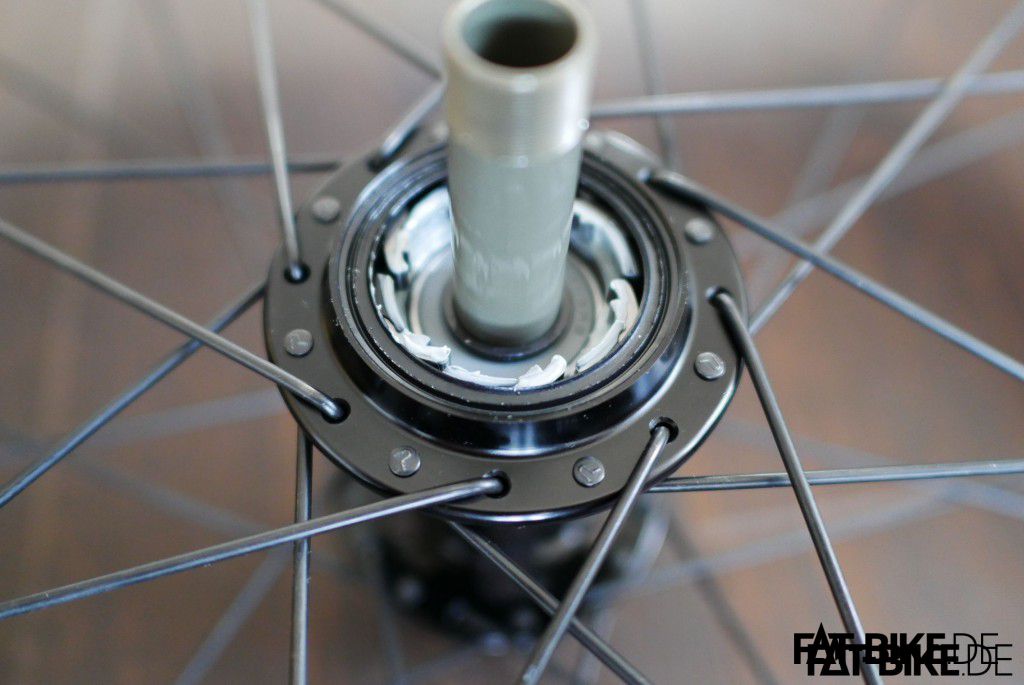 – So… Something HAS to be here otherwise no one will believe it… Initially we pointed on the price tag. However right after we published this article FatLab has adjusted the price so no, there is currently nothing that counts against this pair of wheels. 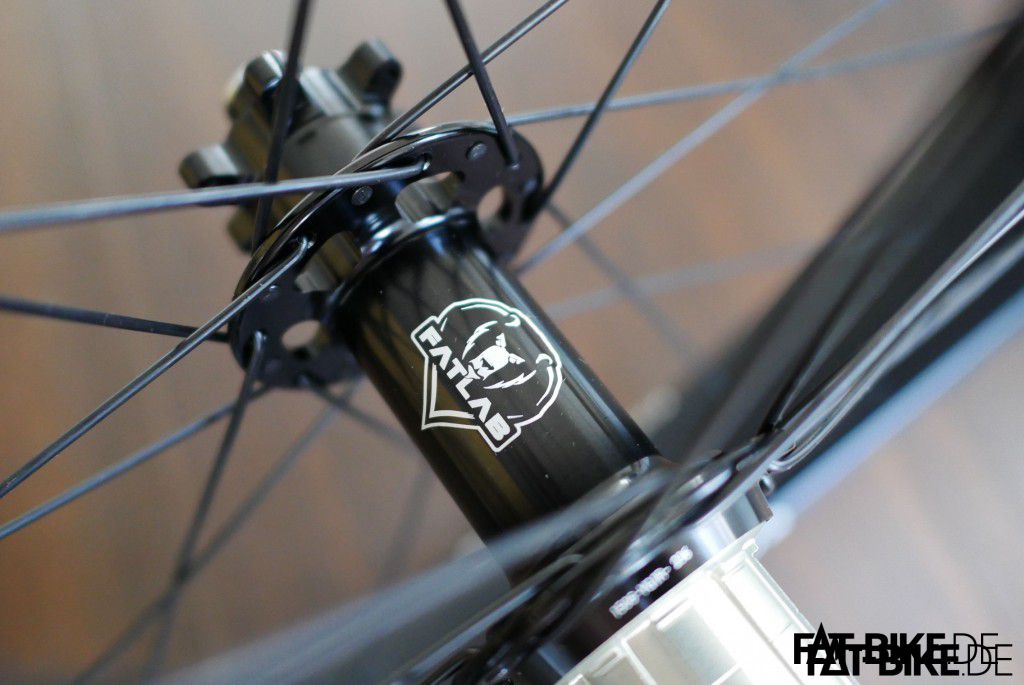 The FatLab FATBike wheelset is simply – FAT. Everything fits, including the great appearance and build quality. FatLabs are for life, no doubt about it. Their overall weight is rather mid-level however running them without tubes changes the game and easily saves your bike one kilogram.

As the price has been adjusted to 599,- Euros* also our initial skepticism has vanished. Nice enough the price holds valid for all available combinations. As soon as Marvin completes the set to become an „out-of-the-box-tubeless-ready-to-go“ package it's time to become giddy with pleasure.