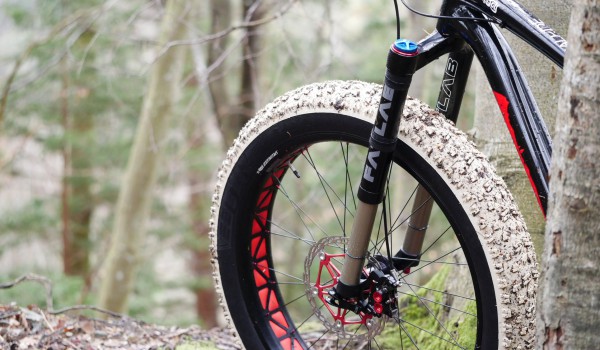 There is little on this planet that polarizes todays bike world as much as upside down suspension forks do. But being FATBikers we are used to polarize and coming from there we are free to check out alien things. And that's exactly what we're gonna do with our FatLab Upside Down suspension fork test.

Upside down means that the fork was literally flipped over so that the outer tubes are not – as usual – connected to the wheel but are fixed to the crown. Eek – what?!? Take a look at the pic below, it tells more than I could do! 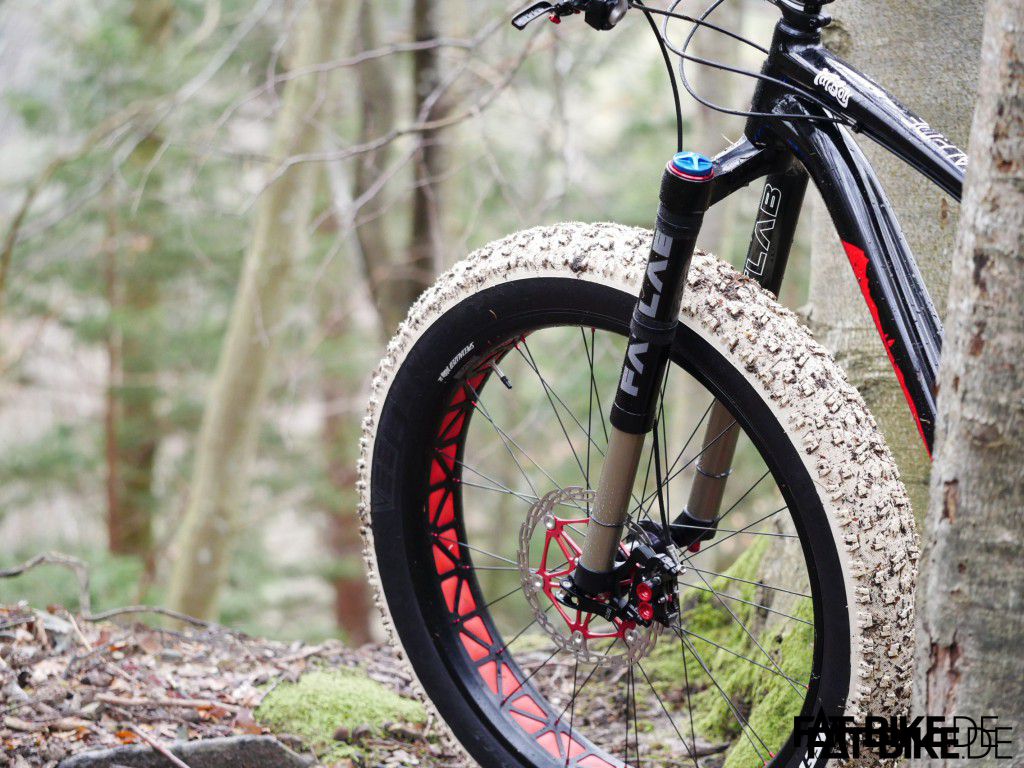 The mighty one: FatLab Upside Down fork

Yet the upside down concept is anything but new. It's indeed pretty common on motorcycles however for mountain bikes it's always been a sort of love-hate relation. It's claimed to have poor torsional stiffness, high maintenance effort, be to heavy, poor performace, fast wear, etc., etc.
There are enough prejudices to hang out a night with your bike buddies and discuss the concept till the break of dawn.
But when you do that,  don't forget to mention the advantages upside down provides, such as lower unsuspended masses or greater lateral stiffness.
Our FatLab Upside Down suspension („USD“) fork test will tell you what a modern USD fork can do for you.  And by the way: any links to our partner Alex* are, as usual, marked with „*“.

We are talking about: FatLab! 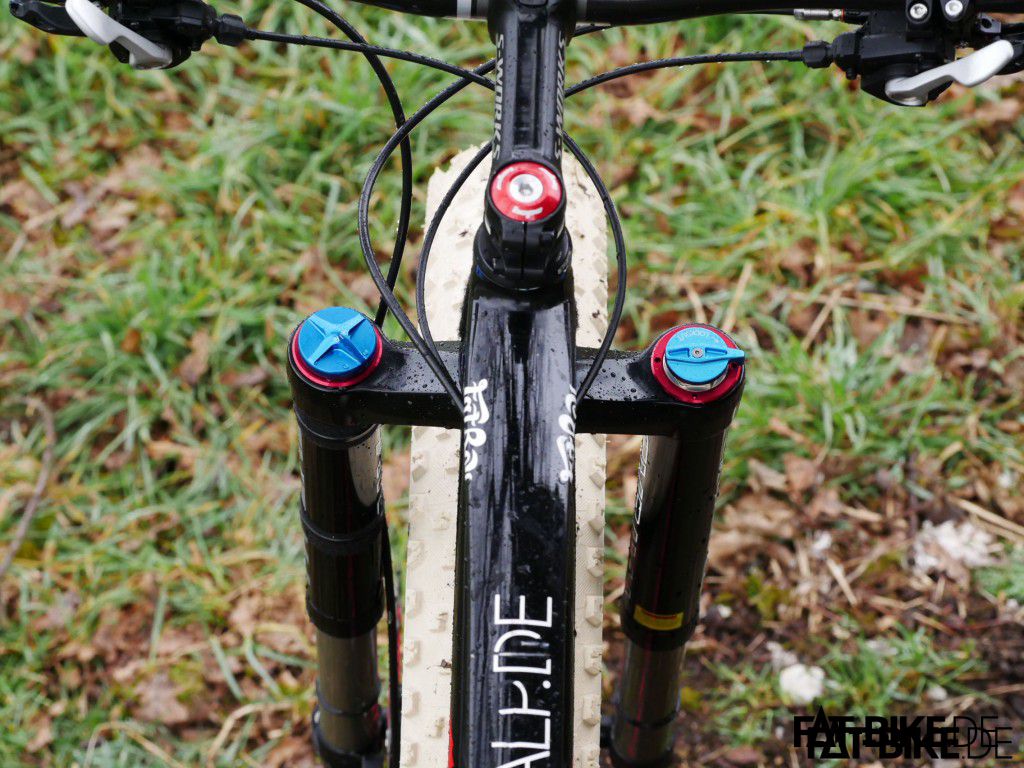 All of you who have read our  series about FATBike wheels oughta know FatLab. The Taiwan based company specializes on FATBike stuff and has shown a strong performance on wheels. Now, it's a bit confusing that the FatLab fork appears to be sold under different names across the world wide web. We did some research on this and found an explanation: Marvin Besselink, CEO and mastermind of FatLab is named to have developed the FatLab Upside Down fork in his old job as developer at the Taiwanese company that produces the fork. So in that sense the FatLab could be called the original one. However the manufacturer today builds similar forks under his own or a third party label. That's confusing because in case a similar (!) fork shows a weaks performance it's sort of obvious that the FatLab performs weakly as well, doesn't it?

But today we're just writing about the FatLab and our results cannot be transferred to similar forks.

Boy this one must be HEAVY!!!!

There is no second chance for a first impression they say… True – but it may truly fool you! No, the FatLab Upside Down fork isn't as heavy as a black hole and there are no smaller forks orbiting around it. It's rather the opposite: without the through axle and with chopped steering tube our official FAT-Bike.de scale stopped a tad bid below 2kg! That's pretty impressive as it makes little difference compared to the much more filigree Rock Shox Bluto.

And indeed the FatLab Upside Down Fork is pretty massive. It's outer tubes have an impressive diameter of 43mm (Bluto: 38mm) whereas the inner tubes measure 4mm more than a Bluto's ones (36 over 32mm). Travel is in our case 110mm which just fits into our Specialized FatBoy Hardtail.
The fork width meets the modern 150mm hub standard whereas a 135mm option* is likewise available. Brake caliper is mounted on a standard Post Mount base.

As there is no connection between the left and right tubes apart from the crown, the fork provides ample room to also take a giant Vee Tire Snowshoe 2XL 5.05″ tire.

No pain, no gain… 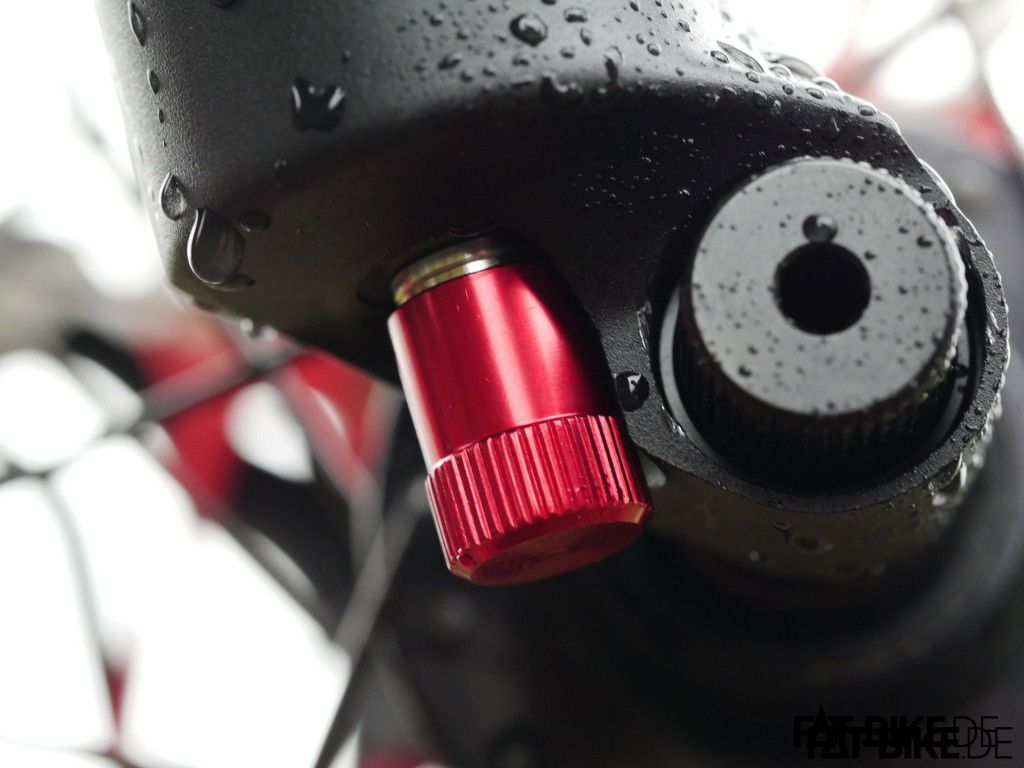 Rebound adjustment nut with no clicks

Though the FatLab Upside Down fork can be bought in various configurations (travel, hub width, etc.) there is only little accessories in  the package. The only thing that comes with your new fork is a through axle. Smart detail: there are no threats cut into the fork but there's a separate lock nut to secure the axle. This avoids any potential damage that might arise from the typically odd front wheel installation. Unfortunately this causes the system to be incompatible with the Maxle standard. So if you intend to swap it against something more ergonomic or light weight – forget about it! 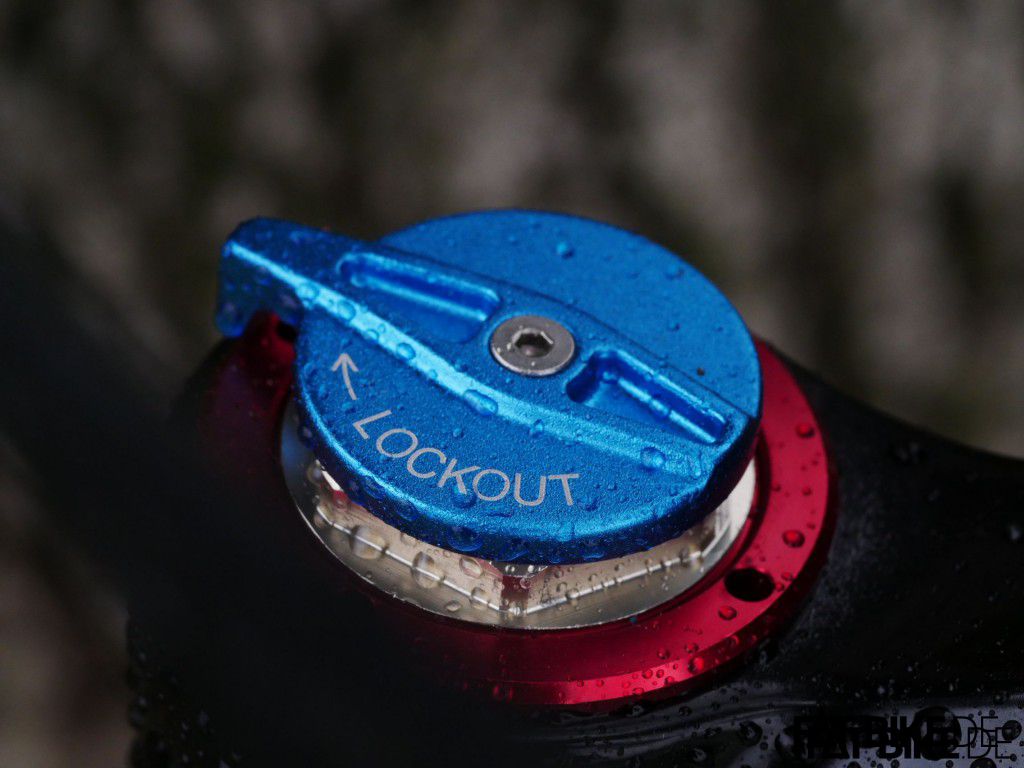 Unfortunately the potential adjustments are fairly limited. True, the fork has a real lockout mechanism. But that's it, folks. Well, you can adjust the rebound and the air pressure. But compression, travel, air volume or platform cannot (or not without major work in case of travel kits) be further adjusted. 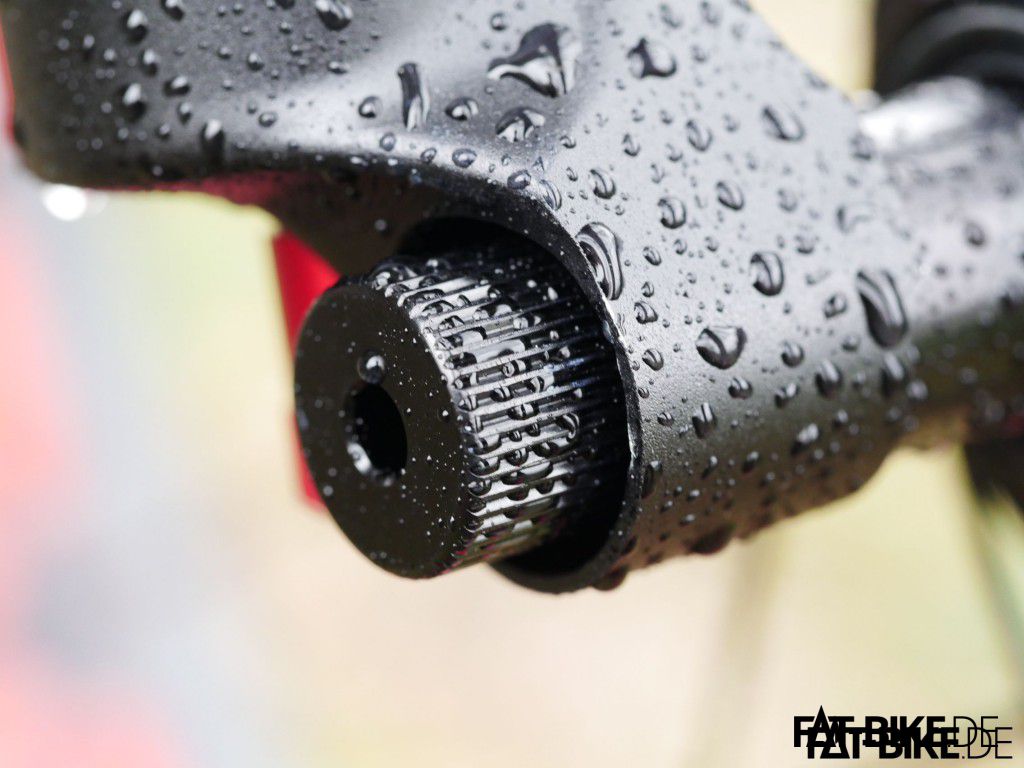 So, positively expressed the fork's adjustment is a piece of cake. It has an extremely large air volume and works on low pressure. Compared to a standard Bluto that we'd use with roughly 120-140 psi, the FatLab Upside Down fork works well on 80 psi. During our test rides we closed the rebound approx. 1 turn (out of 4 possible). The tires (Specialized Ground Control Fat) were inflated with our (hardtail) usual 0.4 bar to get comparable results.

With this setup the FatLab Upside Down fork does what we expect it to do: work firmly and with linear progression. So the tire can smoothly float over minor obstacles whilst the fork provides ample reserve for bad surprises. In such cases it fully uses it's 110mm travel without providing any sluggish feeling. Everything remains well defined and you get a good trail feedback. It's just like adding more reserve to the FAT ride that allows you to give a damn on unexpected obstacles.

But how about torsional stiffness? Upside down suspension forks are said to take control commands rather as „recommendation“ and are unwilling to accept any instructions given by the commander. Unlike during hard (disk) braking that causes the rider to unintentionally make a left turn.
Now, this kind of disobedience seems to be unknown to the FatLab Upside Down fork. It willingly follows all instructions and maintains both, intended and actual direction closely aligned. Inner and outer tubes can't be twisted against each other which leads to a good overall torsional stiffness.

Only in case of very hard braking on concrete using our mighty Hope E4 4 caliper brakes on 203mm discs we could sense a slight twitch. In everyday use and in particular when using standard brake force this effect should not play any role at all. 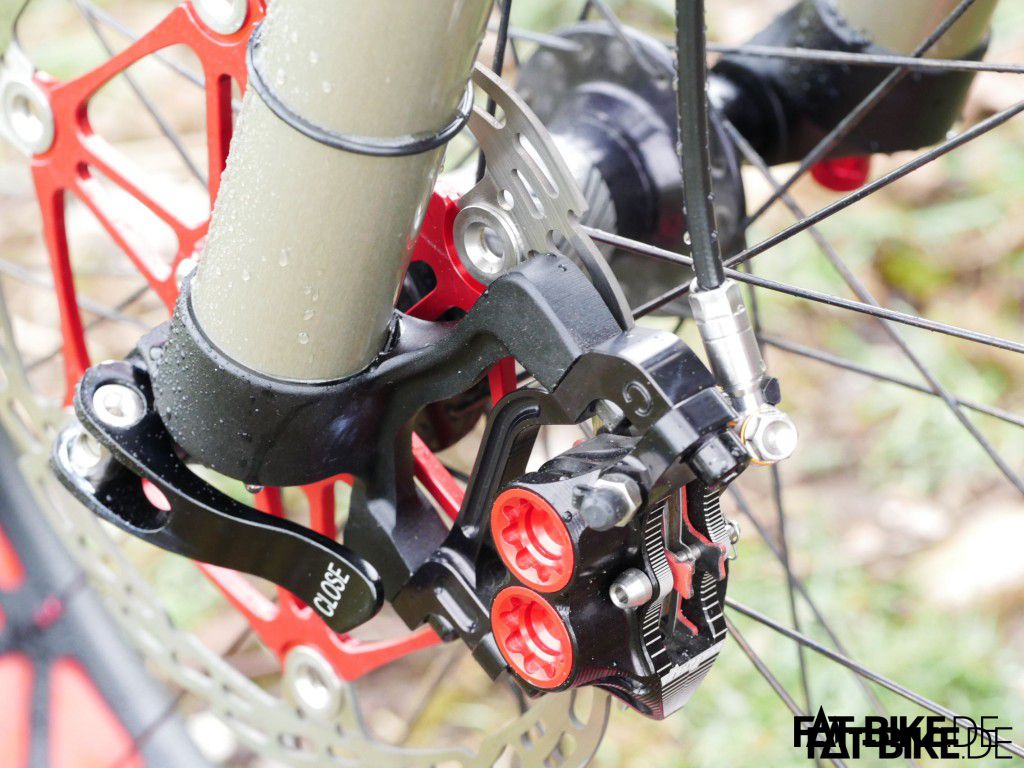 However the FatLab Upside Down fork still has its weakness. Due to the way it's built there still is some minor play in the entire system that causes weak torsional stiffness around the middle position. You will not sense it during hard cornering as in this case the play gets eaten up by the overall movement. But in case you're rolling over a passage of roots you might sense that the fork becomes alive. Then it feels strangely unprecise and sort of detached. And even though there were no issues to precisely maintain the direction it took us a while to get used to this behaviour. Once we did, we had a lot of great fun with the FatLab Upside Down fork.
Overall we wouldn't call the torsional stiffness „perfect“ but it's for sure in line with current standards. 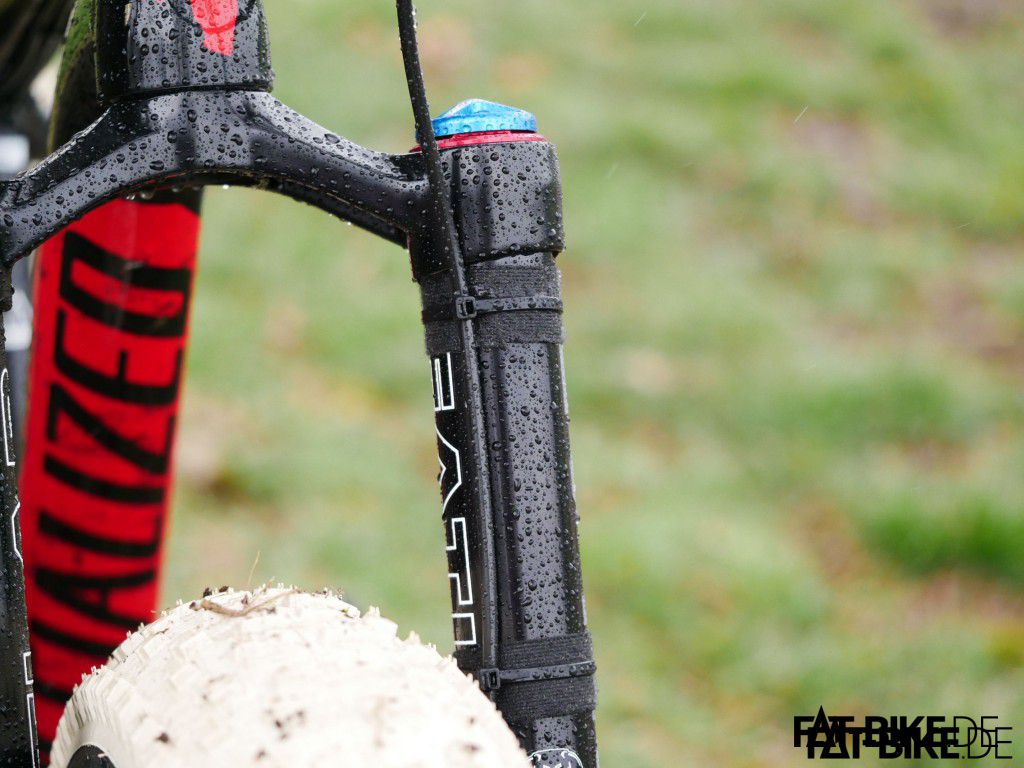 But of course we found some details to be added to our wish list. First of all the sharp-edged and little ergonomic quick release lever sucks. Then there are no mounting points for the brake cable. We used some sticky tape and cable straps to fix it. Tricky one: the brake cable moves as the fork does it's job. Therefore we strongly suggest a test with flat fork to ensure your front wheel will not eat the cable.
Moreover we'd appreciate a compression damper that allows more interaction and adjustments. Plus a way to adjust air volume and progression/spring characteristics.
If FatLab then added a soft stop to catch the fork when it quickly rebounds we'd be happy! 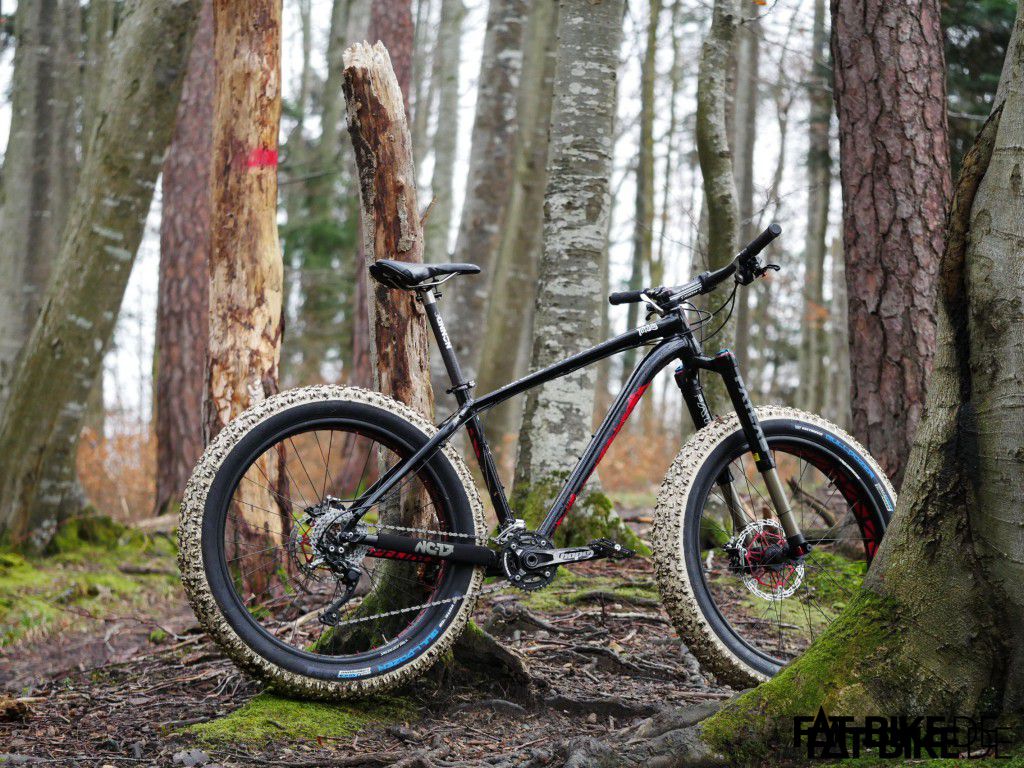 Performance, stiffness, weight – all good! The FatLab Upside Down fork is a solid piece of machinery and is, though it's still not state-of-the-art, a modern and capable fork.
It's firm characteristics perfectly fit FATHardtails where it allows an ideal cooperation of tire and fork travel. However we doubt that it can be integrated into a super sensible FATFully chassis such as our Maxx Huraxdax as the compression damping does not allow to harmonically match the work of the rear suspension.
In general the fork takes somes hours of riding to run in and achieve ideal performance.

So, for 949,- Euro* you can buy a very solid Upside Down suspension fork that's made for those who love the extraordinary, for design freaks and anyone else. As eventually the FatLab Upside Down suspension fork is a USD fork that, apart from some minor draw backs, can convince.
The massive FAT design comes for free. So for all who think a Bluto is spindly: get out and buy yourself a FatLab!