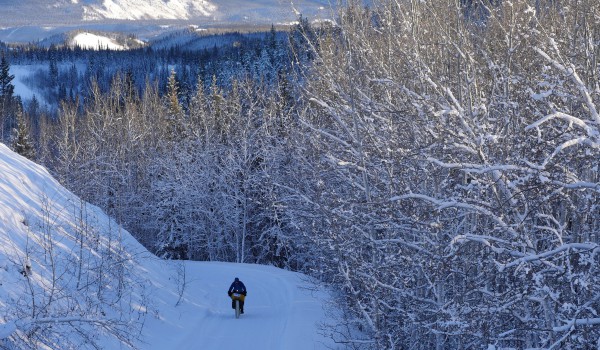 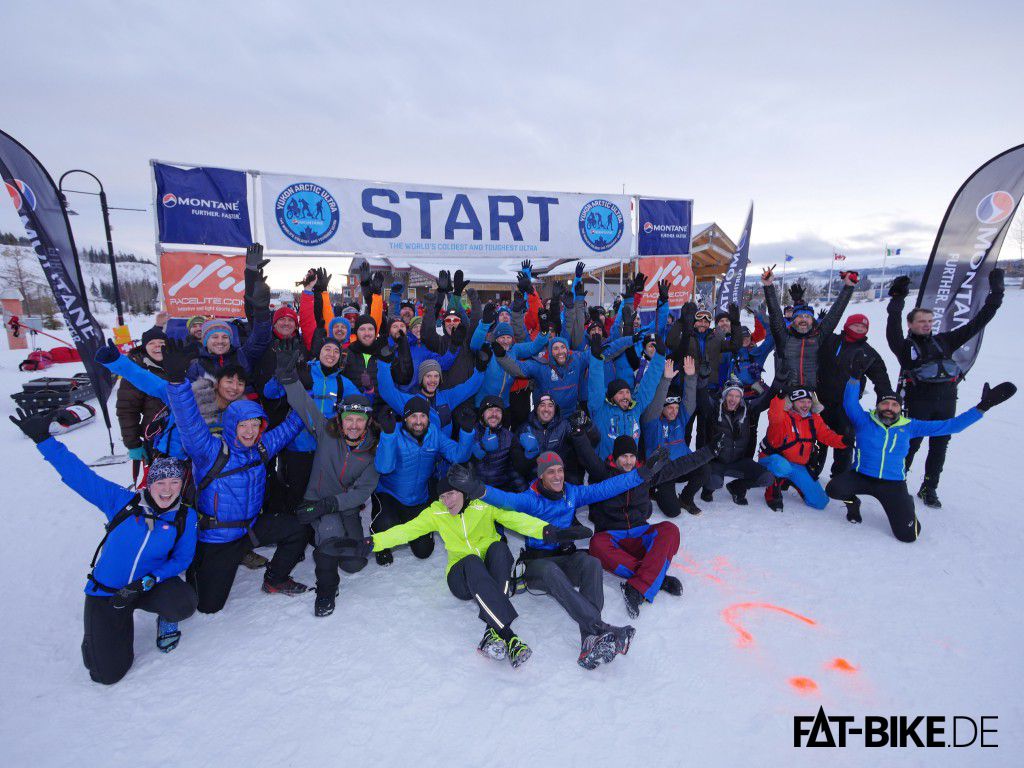 After we've given you some insight into what it takes to rides an Ultra Marathon in winterly Yukon environment there are still some questions unanswered. How did the Bike perform during the Montane Yukon Arctic Ultra? What equipment was used? And how was the finish? Here are the answers! And this will also be our last article on this exciting topic. But don't worry! There are new highlights to come!

Heart and soul: the FATBike 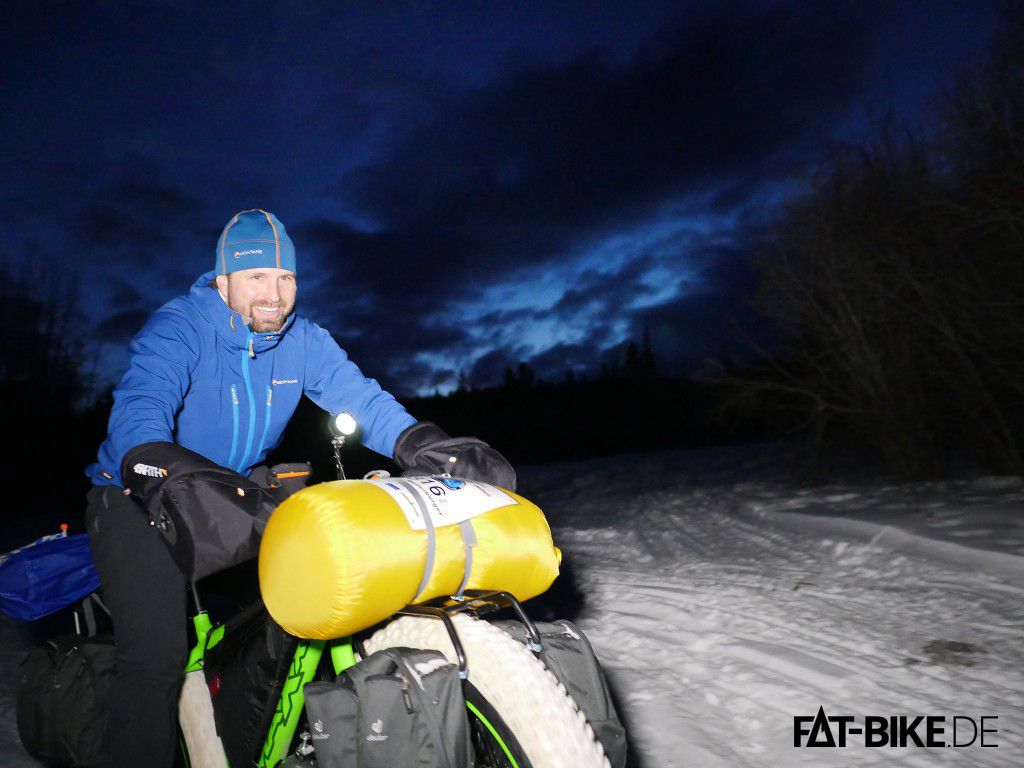 Flori on his drudge (Copyright: derekcrowe.photo/MYAU)

We told you a lot about the development of the MYAU race FATBike. If you havn't already seen it check out here (sorry, German only!)! Both, Flori and Bavarian bike manufacturer Maxx, were in uncharted waters when they started thinking about what a FATBike needs to feature in order to cope with arctic conditions. And it all proved to work very well! But as usual: the devil is in the details! So e.g. the grips were lock-on ones. And guess what – the (metal) lock-on ring posed a thermal bridge that caused frostbite on Floris hands inside the Pogies! However the overall performance of this debut FATBike was perfect and Flori particularly appreciated the 1×11 Shimano Deore XT that was installed instead of a Rohloff Speedhub. According to Flori the gear range was just perfect and even though there was a relatively small front chainring he only used the 11th gear once to get on Vmax.
As the 2015 Maxx Jagamoasta FATBike is not capable of housing a 5.05″ Vee Tire Snow Shoe 2XL on the rear Flori's one wish would be to have the same profile on a 4.8″ Vee Tire Snow Shoe XL. However the chosen setup with white „Pure Silica Compound“ tires and tubeless installation (based on a sealant that was specifically developed for such low temperature usage) worked perfectly well. Due to the low rolling resistance (compared to a frozen tube inside your tire) and the even-soft-when-cold rubber the tires for sure were a key feature to succeed!

More than just a few bags… 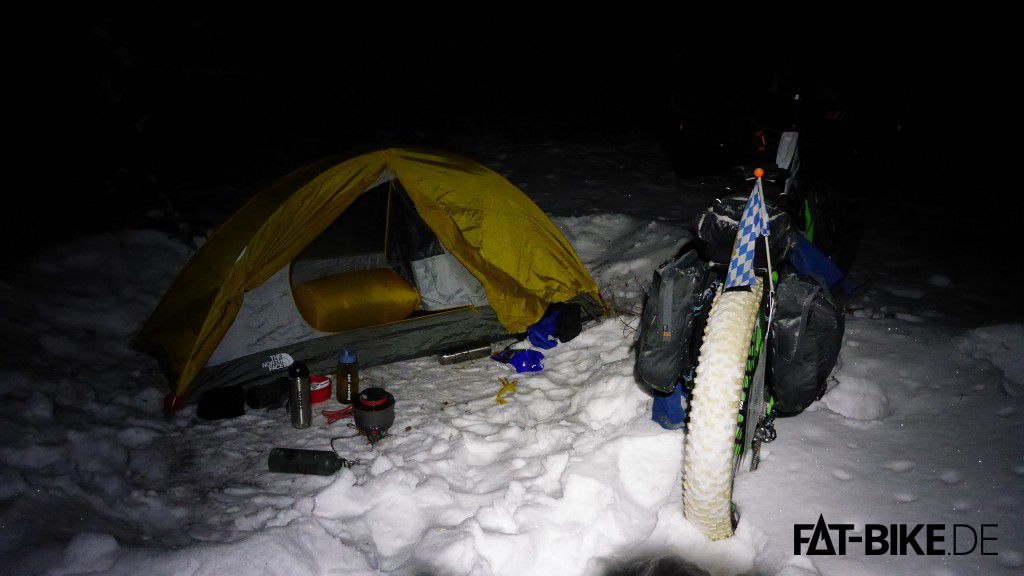 Another key factor is the setup of any equipment. First of all Flori started with an awesome overall weight of approx. 40-45kg (bike and bags) which is 15-20kg less than most other riders achieve. Any expendable material was stored in so called drop bags and there were three opportunities to swap such drop bags against fresh ones (that had to be delivered to the respective check points in advance). But there is more strategy. So every piece of equipment had one dedicated place. Even in complete darkness Flori would have been able to quickly find whatever he needs. Dead on target!
Same was with the clothes: every layer was color coded, let's say underwear red, insulated wear blue, waterproof stuff yellow, etc. So it's quick and easy to pick what you need in that second. Smart, eh?
Want more strategy? How about this: Flori used a „cascaded water supply system“. I.e. every morning he filled three bottles with hot water – a thermos flask, an insulated water bottle and a regular water bottle. Once the water bottle was empty Flori re-fueled it using the insulated water bottle which then was recharged using the thermos flask supply. So your drinking water always has a comfortable temperature. And at night he used the bottles as hot-water bottles to quickly heat up the sleeping bag. For sure: it's more than just a few bags to carry on your bike!

Look forward to the best but prepare for the worst! 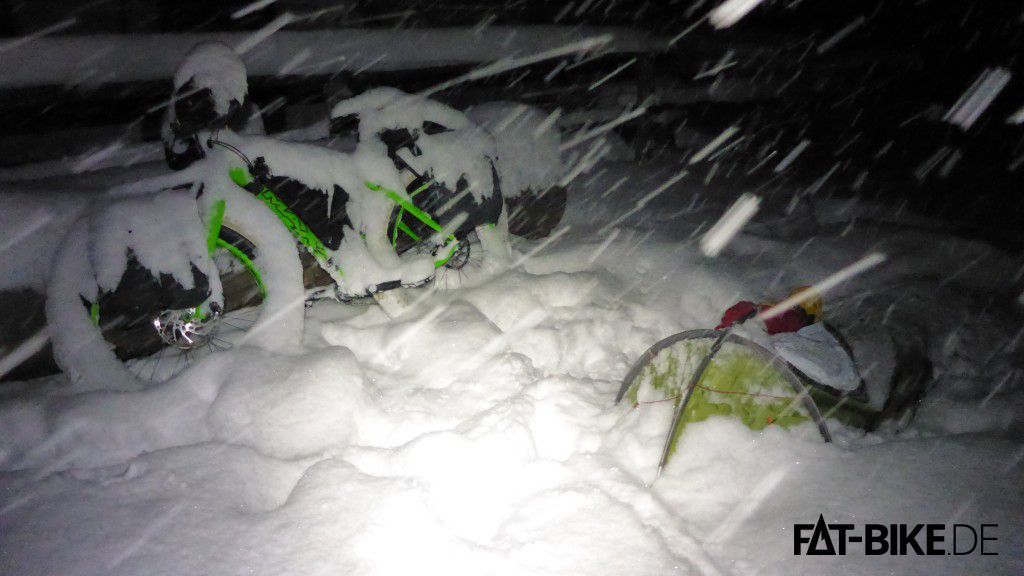 Now, for all of you who are now sitting in front of their PC, tablet, mobile, etc. thinking „Damn, I gotta do this, too!“ we asked Flori for some general advice what to consider as preparation. His answers were simple, yet substantial:

Flori is currently thinking about providing coaching on how to cope with such extreme challenges as well as holding speeches about the adventure. It's definitely worth watching his website and keep up on facebook. 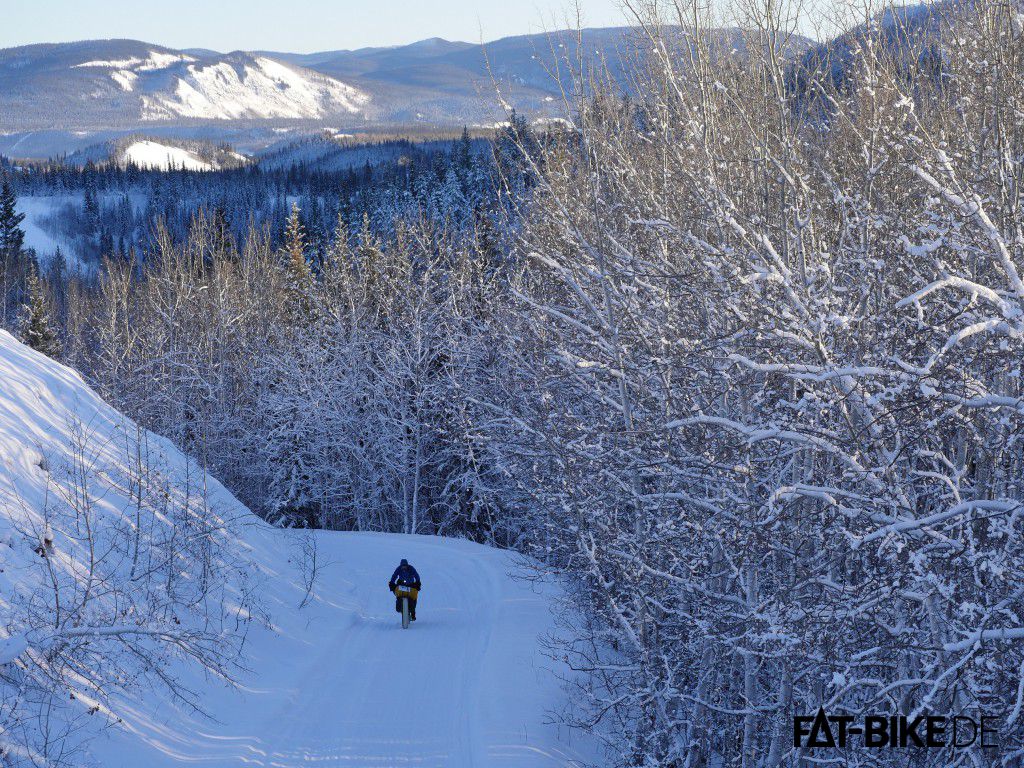 So, there is one last thing to mention: Flori's heroic finish. His last 12km were down hill, so Flori was preparing himself to the moment when he would eventually cross the finish line. There would be hundreds of people frenetically cheering him and celebrate is awesome success. And there would be hot coffee and cold beer to warm up and celebrate. Oh boy what a heroic finish!!!
Well, you may guess that things don't always go the way you expect them to go… So, when Flori arrived there was – no one! So he got off his bike, walked into the shack where the organization team was based and said „Well, here I am!“. Answer: „Oh, you're fast, man! We expected you to be here in two hours!“ And then Flori was told that he is an a „dry town“ which means there is no beer… Four days and 300 miles and you don't get your well deserved beer – for sure WE will not do this race, hahahahaha!
However, there was hot coffee, loads of food and another well deserved thing: a hot shower!

But not to give a wrong impression: Flori explicitely praised the great race organisation. All tracks were perfectly well prepared, instructions were clear and precise and everything was done to ensure the highest possible level of safety and protection. And every checkpoint (usually private houses of local volunteers) was fully equipped with all you need, including passionately cooked food and great talks with local people to unfreeze your brain! 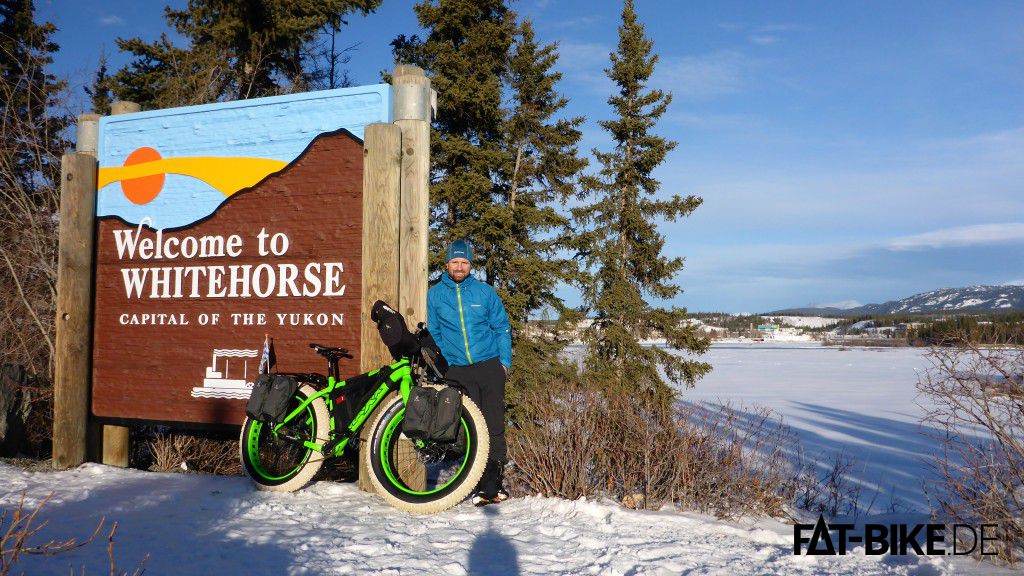 This was one of the first pictures we received from Whitehorse. Hello and good bye! (source: Flori)

Not much to say. It was just fantastic. Awesome guy, awesome bike, awesome story, awesome race. We can only say thank you to Uwe, CEO of Maxx and Flori that we could be part of it. And again we just can congratulate Flori and the whole team of Maxx on this stunning success! To be clear: according to our recherche Flori is the first German starter who ever won the overall standings of Montane Yukon Arctic Ultra. And also he's the first starter to ever win the overall race on a FATBike. What an outstanding debut for Flori and Maxx!

So, that's it folks! Now switch off your computer, get out and ride!