Well, if there is something like a shining example of full suspension e-FATBikes – it would be the Maxx Huraxdax EL 2018. Obviously, it's the damn cool glow-in-the-dark coating. But  even aside of this rad effect there is much more to make that bike just stand out of the crowd. Thanks to the continuous improvement of drivetrain and chassis the 2018 Huraxdax EL currently is the godfather of Electro Funk. So, play that funky music, wild boy! 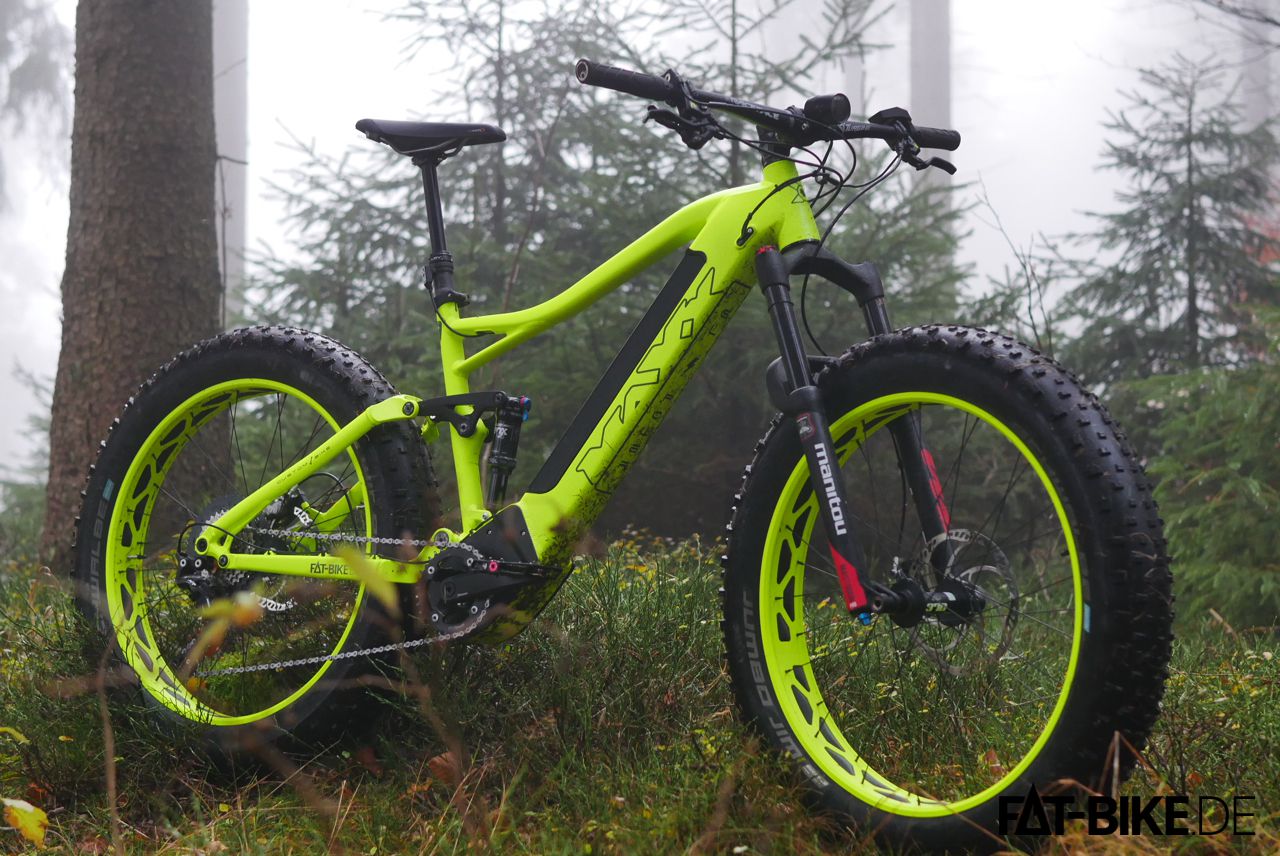 Let's stick with music for a moment. Full suspension e-FATBikes  are some sort of crazy thing… As if you mix down Frank Sinatra and Notorious BIG. Well, they did that and it sounds f***ing FAT! Thinking about  full suspension e-FATBikes it's the same weird thing: a (relatively) brutal powertrain and bullet proof suspension chassis as on a motocross bike combined with handling and silent propulsion of an MTB. This gives a whole lot of new opportunities. A matter of taste? Maybe. But definitively worth a try.

The Maxx Huraxdax EL has been continuously improved since the day it was born. The notoriously overstressed Rock Shox Bluto was banned already last year, the Monarch damper was next in line. Now a specially tuned Fox Float DPS damper ensures a nice and smooth Swing played by the rear wheel. Unlike in it's first generation Maxx now uses the Brose „Drive S“ motor featuring an enhanced heat management and improved software.

The wheel set is Heavy Metal instead: massive DT Swiss 370 hubs featuring a solid steel free hub are tied to the latest Sun Ringle Mulefüt rims. Well, they're actually not that „heavy“, but: unlike aluminum free hubs the steel version will not surrender to the massive torque trying to work individual sprockets deep into its surface. 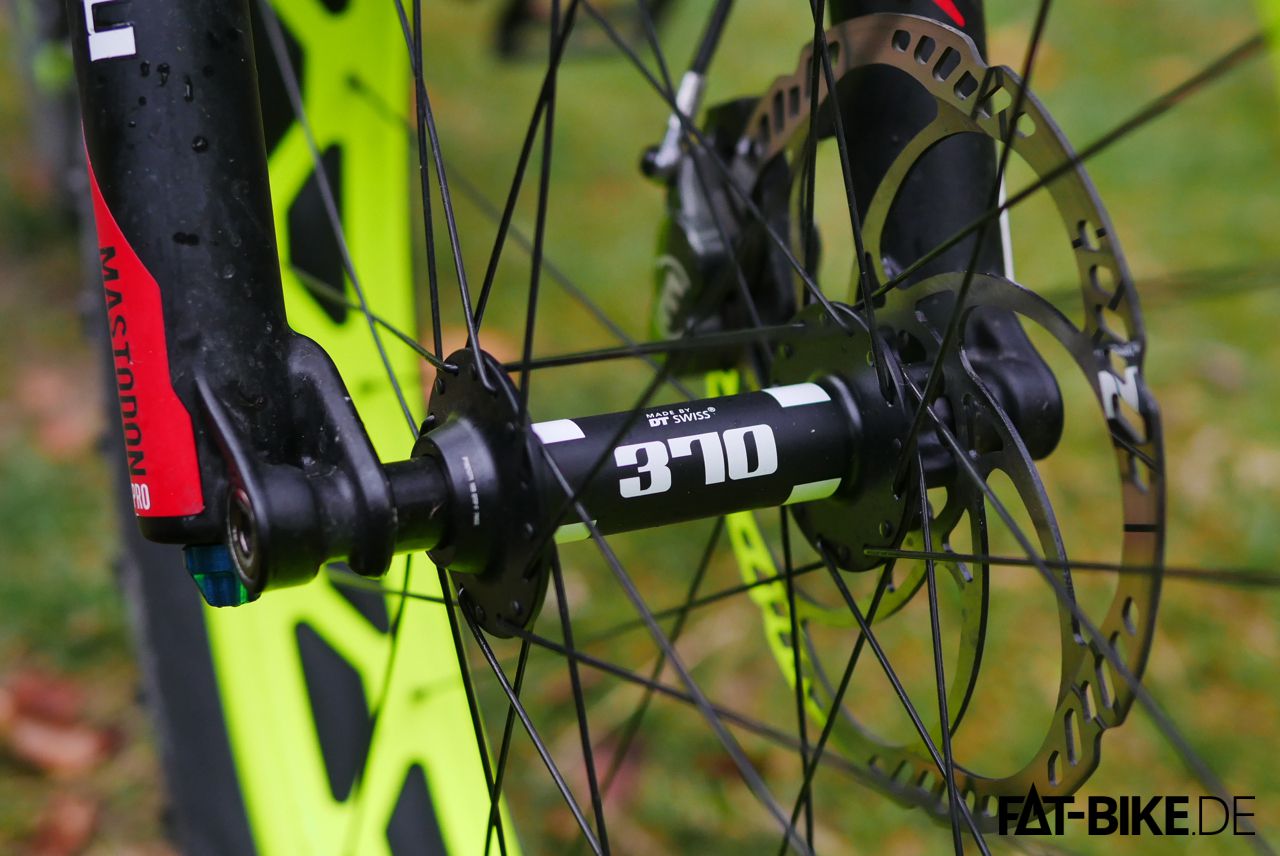 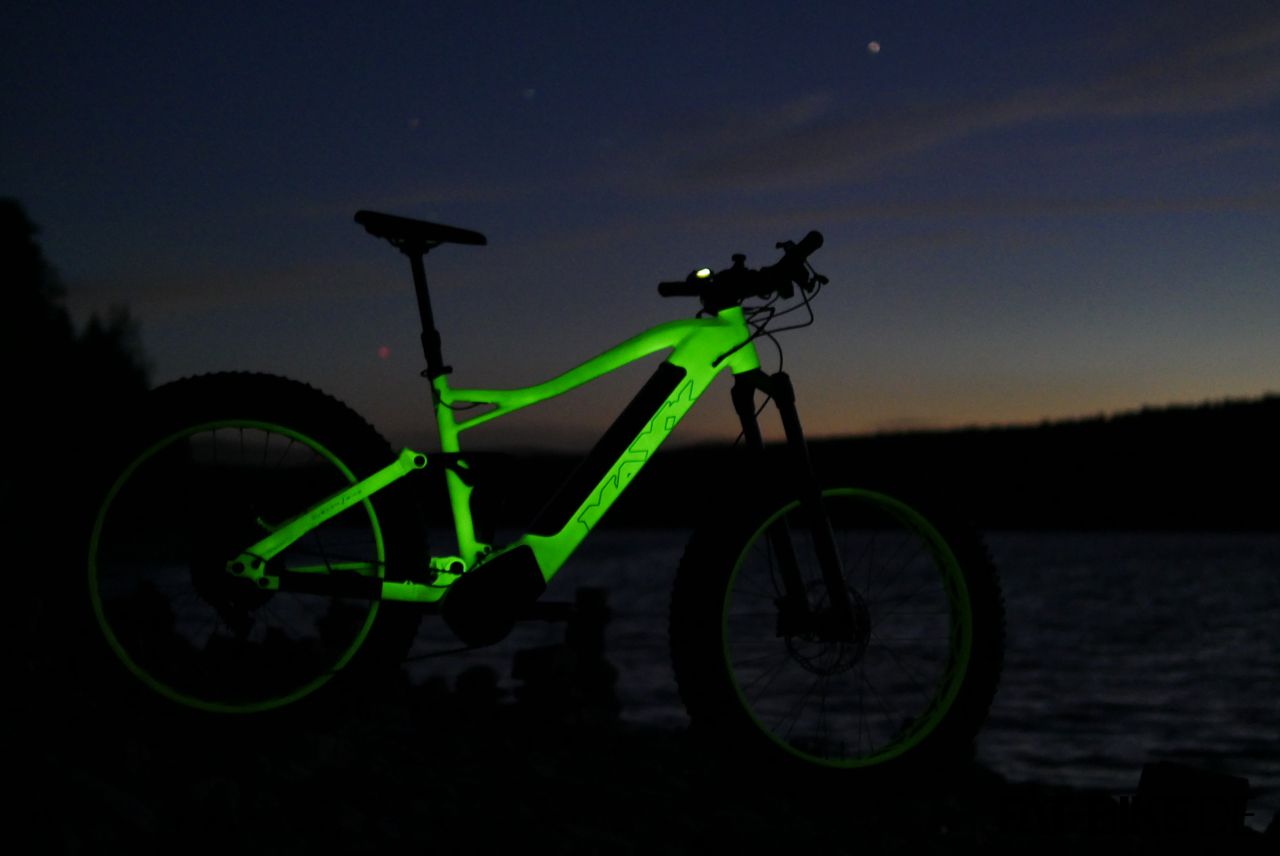 On top comes what we call the „appearance package“ giving you that wicked twist after sunset: night glow powder coating on frame and rims. With all those upgrades it takes a whole bunch of Euros for a prospective buyer to get that thing: 6.934 of them have to be collected and handed over the counter for a successful transaction. That will buy you a car? Maybe. But c'mon – this car for sure is neither hand-build nor capable of single track riding.

Here's where the music plays 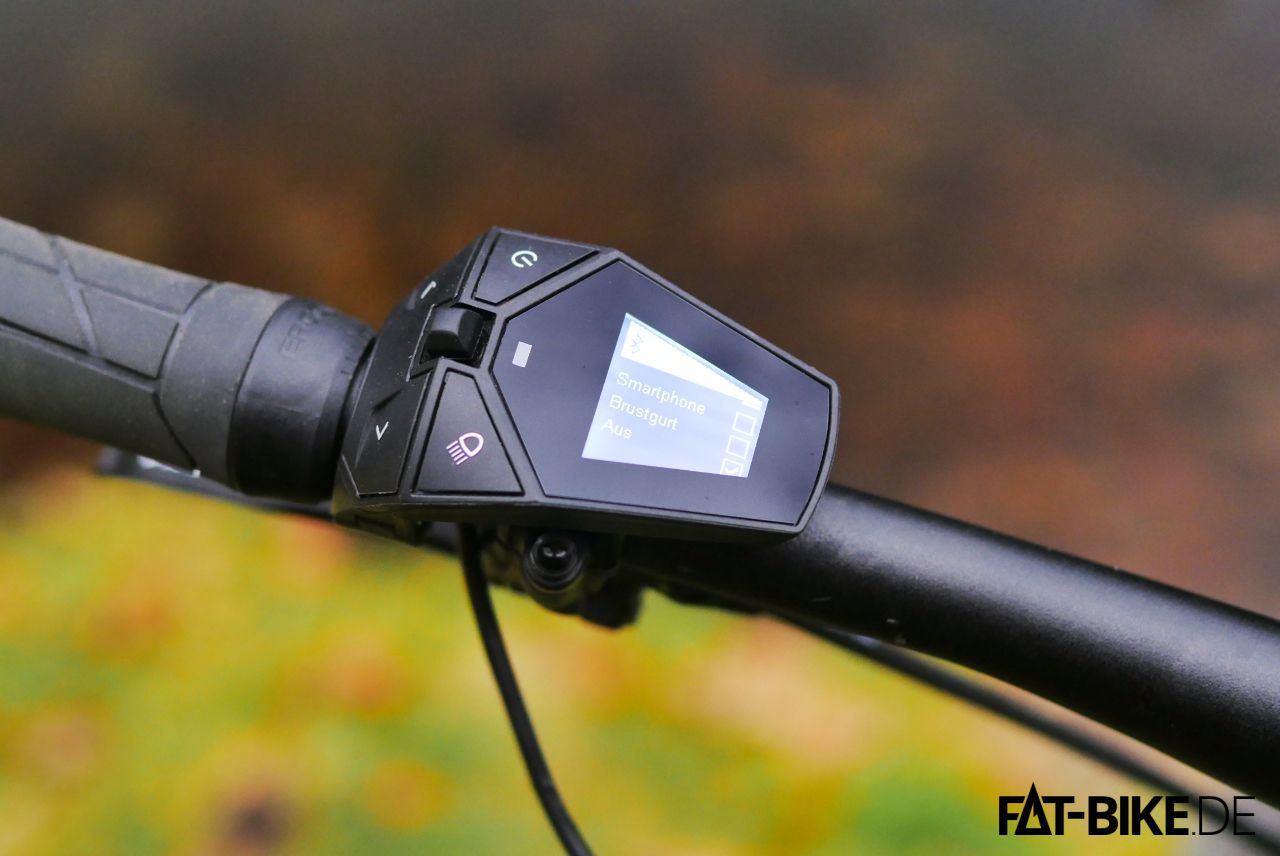 The great thing about e-Bikes in general: loads to discover and play with. Using the latest Marquardt „Comfort“ head unit the rider conducts not only the horses of the Brose motor but also controls the stage light and keeps track of the telemetry. Our favorite feature is the rider's power output reading. 300, 500, 800 watts? This makes a great way to keep track of your training and adds a chunk of extra motivation. A mobile connection feature seems pretty contemporary, yet the current functionality is fairly limited. The head unit is easy to use via push buttons and a joystick. Everything is simple, intuitive and works with even thick winter gloves. Some extra comfort is given by the build-in automated headlamp control that turns on the light when darkness takes over. Sadly there is no rear lamp mated to the system. 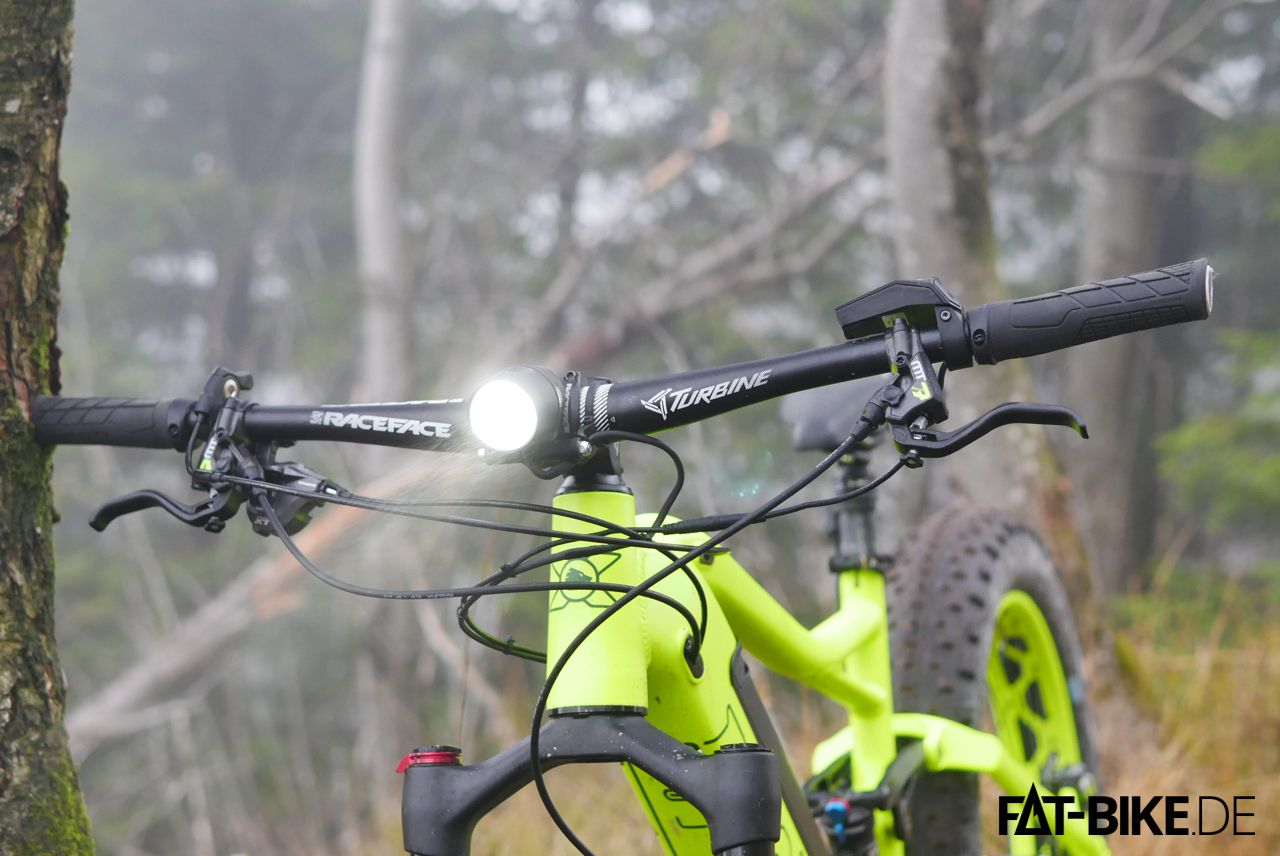 Lights on – by Busch & Müller

Other than Bosch, Brose has not implemented a dynamic power output control. They stick to fixed stages instead which, however, are well set. And if you don't like them Maxx or a service partner can individually adjust it to your liking. Also, the Brose motor offers plenty of torque and strongly propels you even at the lowest setting. As Brose instead of using a gear unit directly directs the motor power onto the spindle the whole system works nicely quiet and highly efficient. Only when flat out there is a noticeable noise. Still: compared with other available systems the Maxx Huraxdax EL can be considered whisper quiet. Pure Smooth Jazz, no Techno! 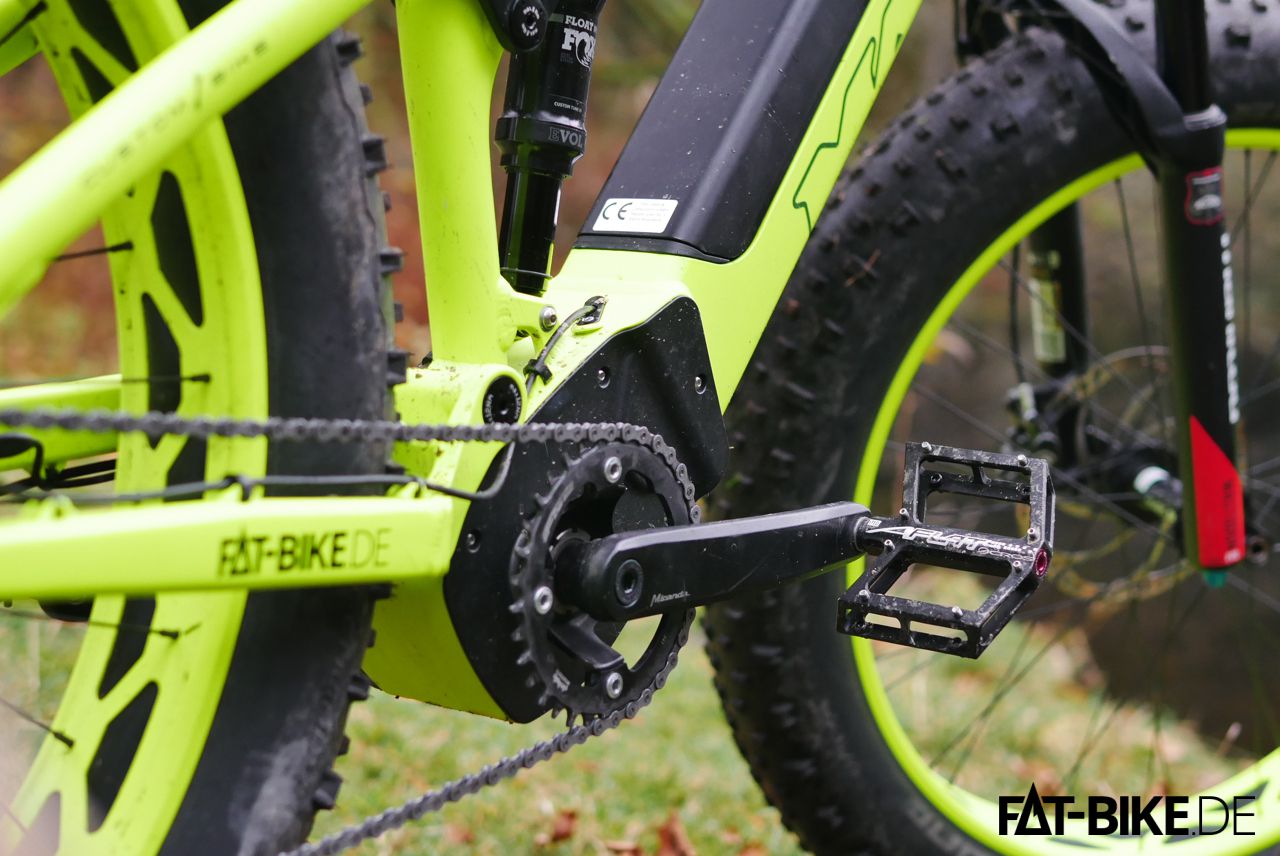 When riding the Maxx Huraxdax EL you may get the impression that it's you who is pulling like a wild horse. Now, that's a perfect illusion created by a whopping 250W, 90Nm and nearly 500Wh battery capacity. Thanks to the perfectly well refined software power feels so natural that you will get the impression it's solely your own legs that are accelerating this damn beast. The most impressive experience on how well this system works comes when you go back to conventional MTB. This in a very strange way feels just odd or sort of defect… 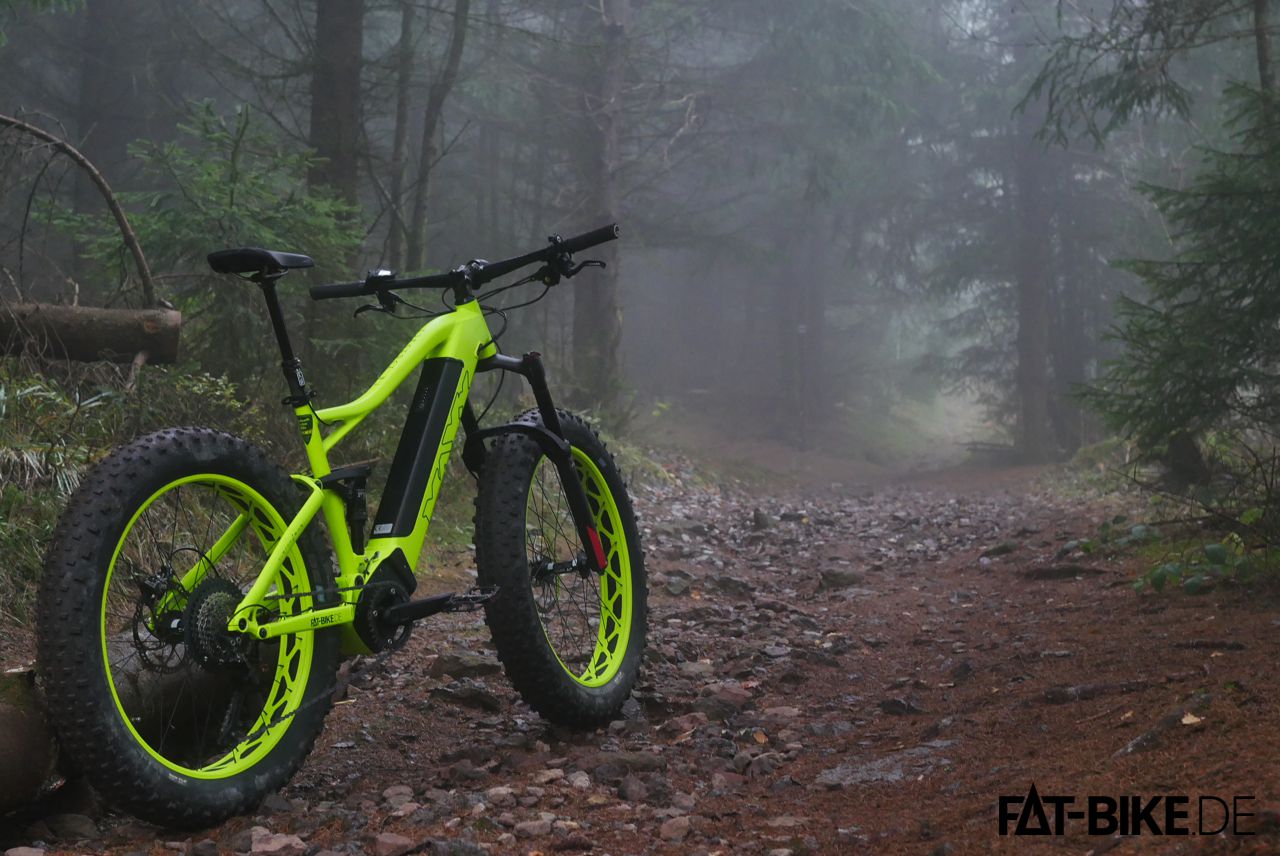 The Maxx Huraxdax EL makes a great touring bike. Thanks to modern geometry angles (68° steering and 74° seat angle) you will get a nice blend of efficient pedaling and snappy handling. Okay, considering its overall weight of just short of 25kg (incl. pedals and tire sealant) this beast is far away from being an aggressive race bike. And simply forget about bunny hops – it looks just ridiculous. But who needs bunny hops where 150/140mm of front and rear travel do the dirty job? You don't even need super sophisticated riding skills to be fast on that machine. 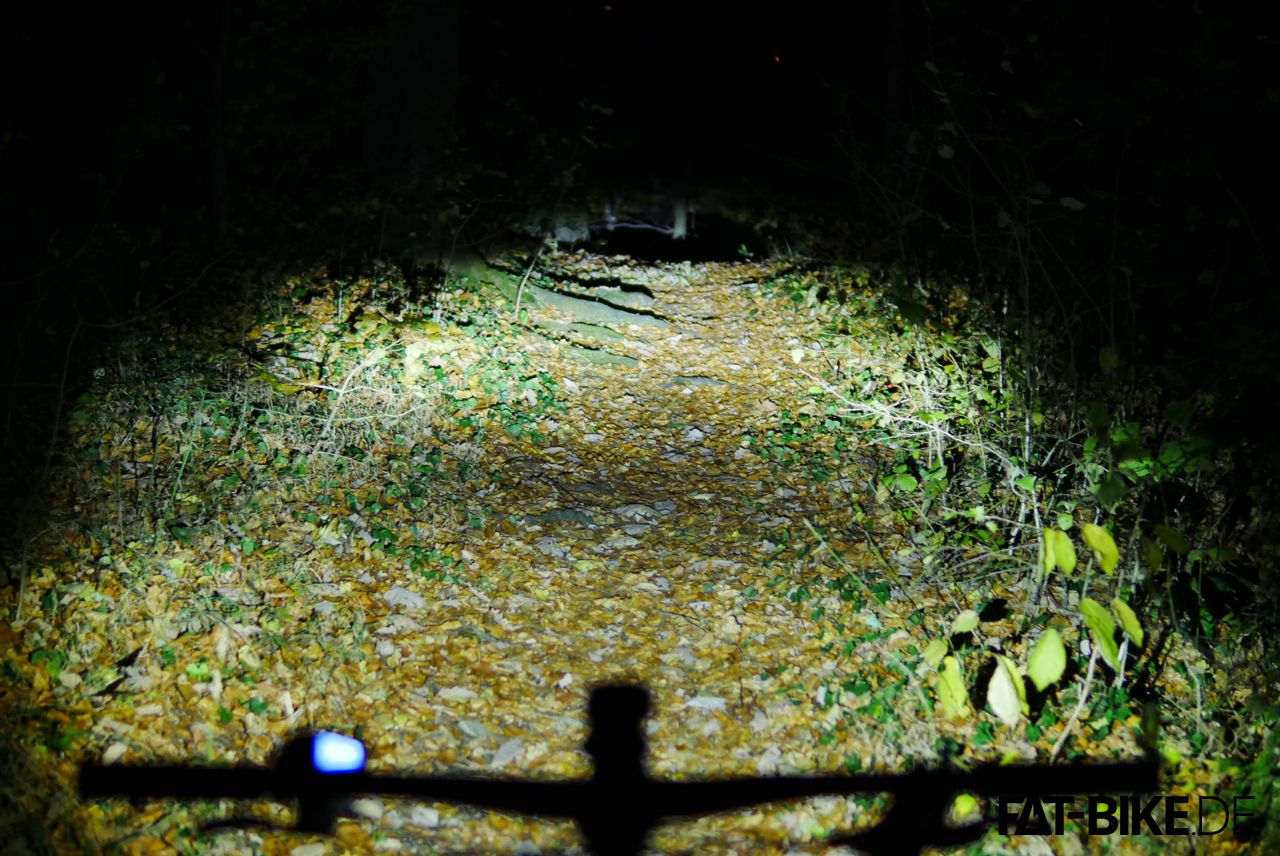 The superior performance of the chassis is based on the near-perfect combination of Mastodon Pro and Fox Float DPS. No matter if you are out for a cafe latte or a thrilling downhill – the right adjustments for your application are just a few clicks away. The super capable Magura MT7 brakes complete this high performance setup by adding braking power that's close to sticking an iron bar right through your front wheel. If there was a FAT-Bike.de gold medal for great brakes that bike deserved it!

It's hard to believe a test without complaints… But… Not much to criticize this time. Well, the weight… For us still a tough cooky. Yet this is something the Huraxdax EL has in common with most of the current eFatties. And there is merely a solution in sight. Well, and maybe the main bearings could a tad bit larger to stiffen up the rear end. It may be worth it, in particular when considering the healthy weight. 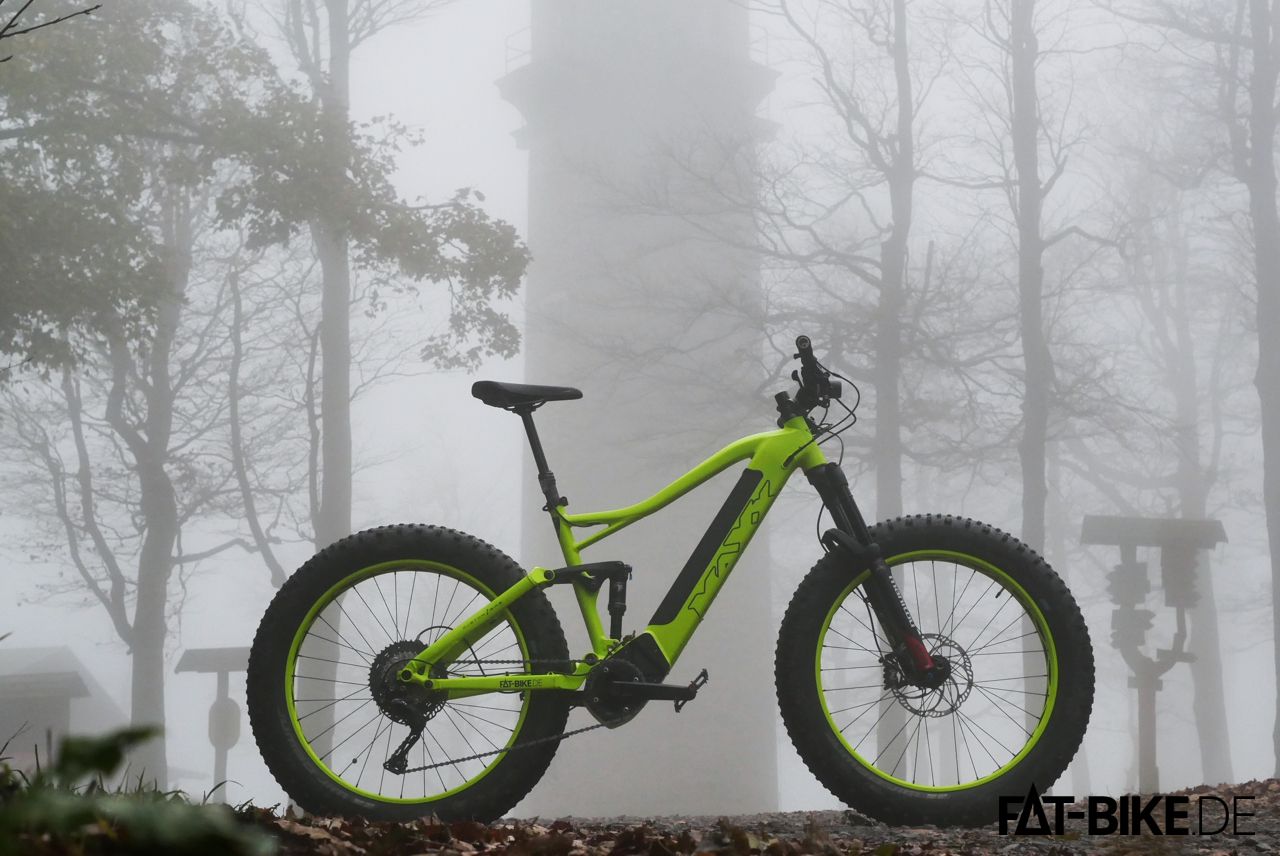 Ah, yeah: the tires. Jumbo Jim isn't a traction monster. Never was… These tires roll nearly effortless (for a FATBike tire) and thereby help preserving valuable energy. But the brute force of the drive train can easily over stress it's little knobs. However just recently Maxx added the splendid Vittoria Cannoli tires to their configurator. We highly suggest this option to all of you who intend to maximum propulsion even under extreme conditions.

From the very beginning the Maxx Huraxdax EL has been more than just a solo act. It combines the best of various styles on one stage. It's a bike for those who want to expand their possibilities. And it plays absolutely no role on which level your training and driving skills are. Huraxdax EL always stands for „more“. And if not „more“ that at least „different“. The proven combination of powerful drivetrain, high performance chassis and custom build is simply unique and for us this blends into the best currently available full suspension e-FATBike package on the market. 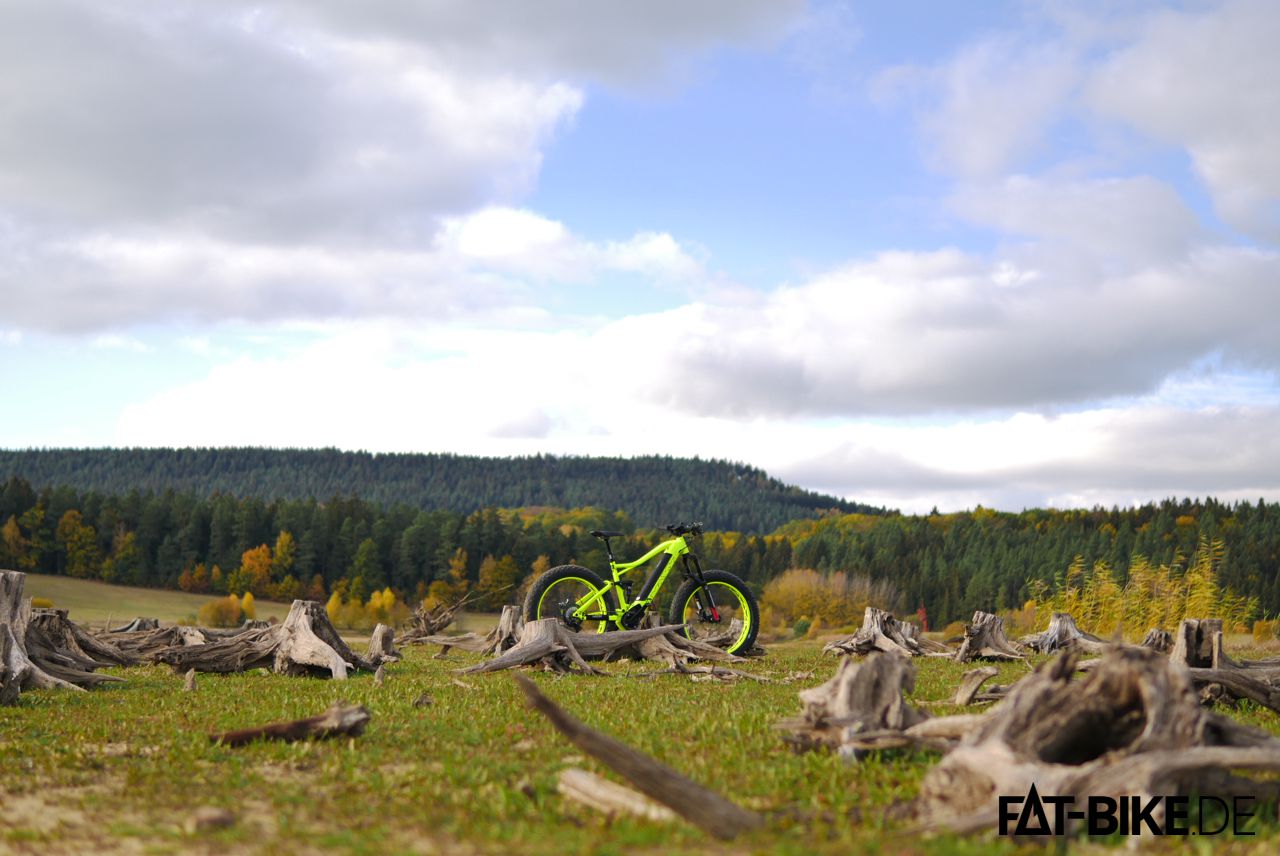