Standing in front of the all new Huraxdax EL by Maxx one may be wondering if you really need to write an article about it. Or if not just one picture says more than a thousands words. But no. A picture would never do this bike justice. From now on the Hulk is signal yellow. But let's start at the beginning. 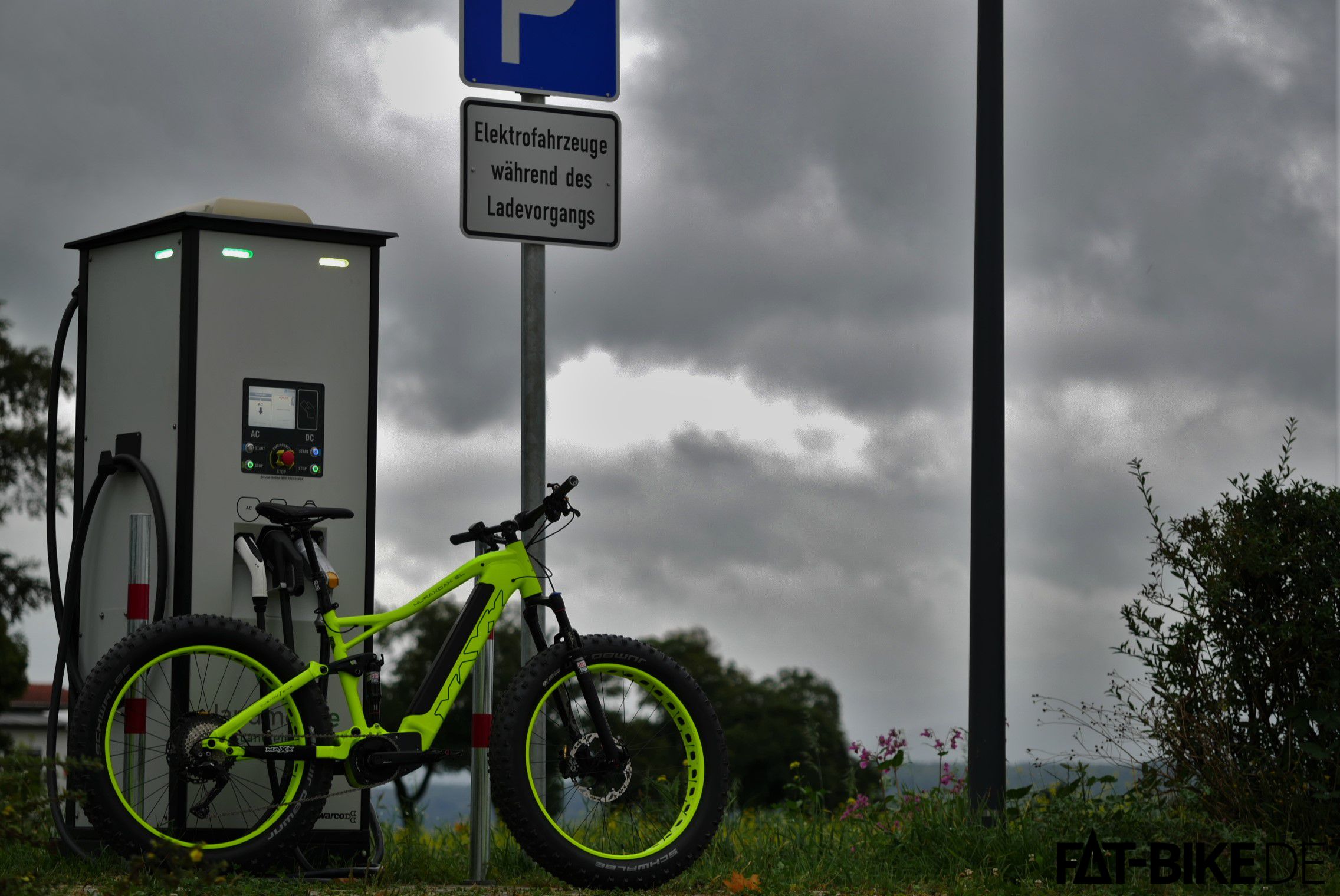 The Huraxdax EL is Maxx‘ very first FATFully that features an electric motor. And they let US do the first extensive test ride with their latest baby. How good is that! 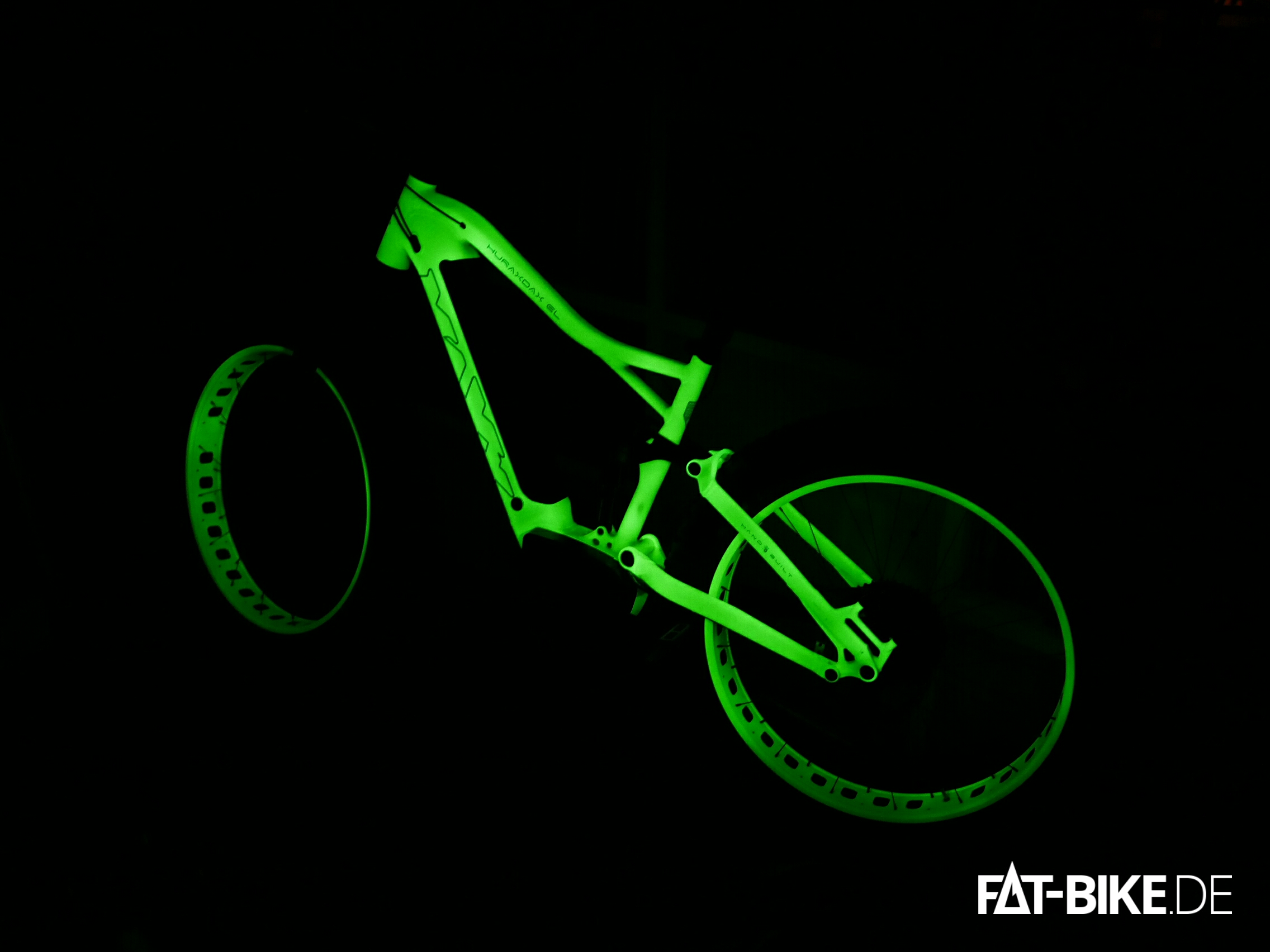 But how would you stick to facts when the Huraxdax EL stands in front of you, solid as a rock? When the glow-in-the-dark yellowish powdercoat drives your lens and camera insane? And when you know that, nicely wrapped in aluminum tubing, a whopping extra chunk of power is hidden there?
Well… not at all. Your heart rate soars with hands getting wet and your brain replays your favorite trail in an infinite loop. 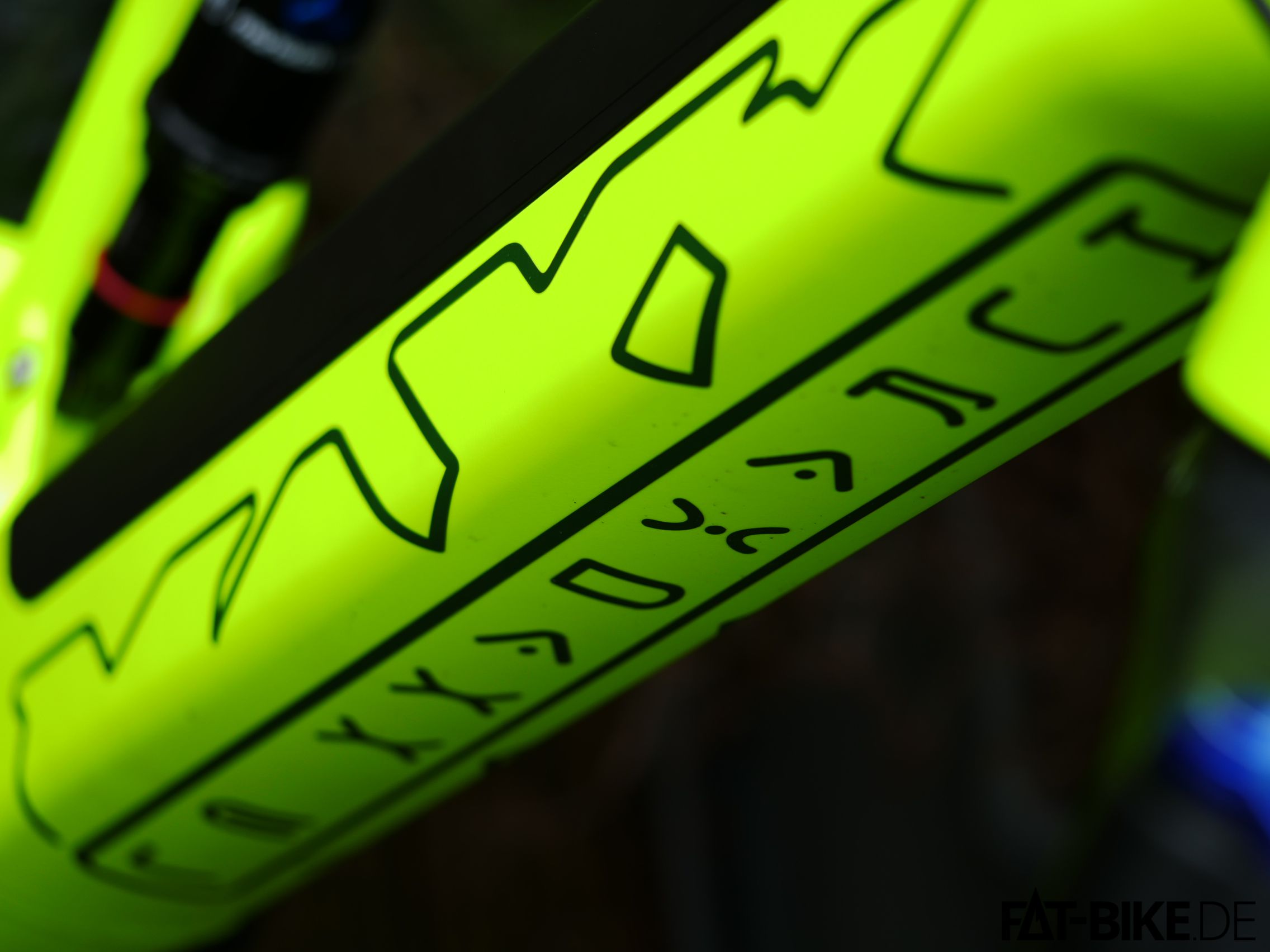 It's hip to be squared!

So first of all we shook off all blunt discussions and arguments about eBikes. Then we approached the yellow beast from Rosenheim with a very simple question: what the hell can it do for us? The answer is equally simple: a LOT!

But let's crunch some numbers before we get emotional. The Huraxdax EL tested features a motor made by traditional German manufacturer Brose. It pumps out a whopping 90Nm (66 ib ft) of torque and has a maximum power output of 250 watts. The squared lower tube houses a BMZ battery that is capable of storing roughly 500Wh of energy. The entire system is controlled by a handlebar mounted control unit.

If it wasn't a full suspension FATBike the Maxx Huraxdax tested would be just another eFatty. But it ain't! Featuring 140mm (5.6″) of travel front (the stock bike will have a different fork than the Bluto) and rear the Bavarian stun gun soaks up roots and rock as we gulp a cold beer after a dusty test ride! 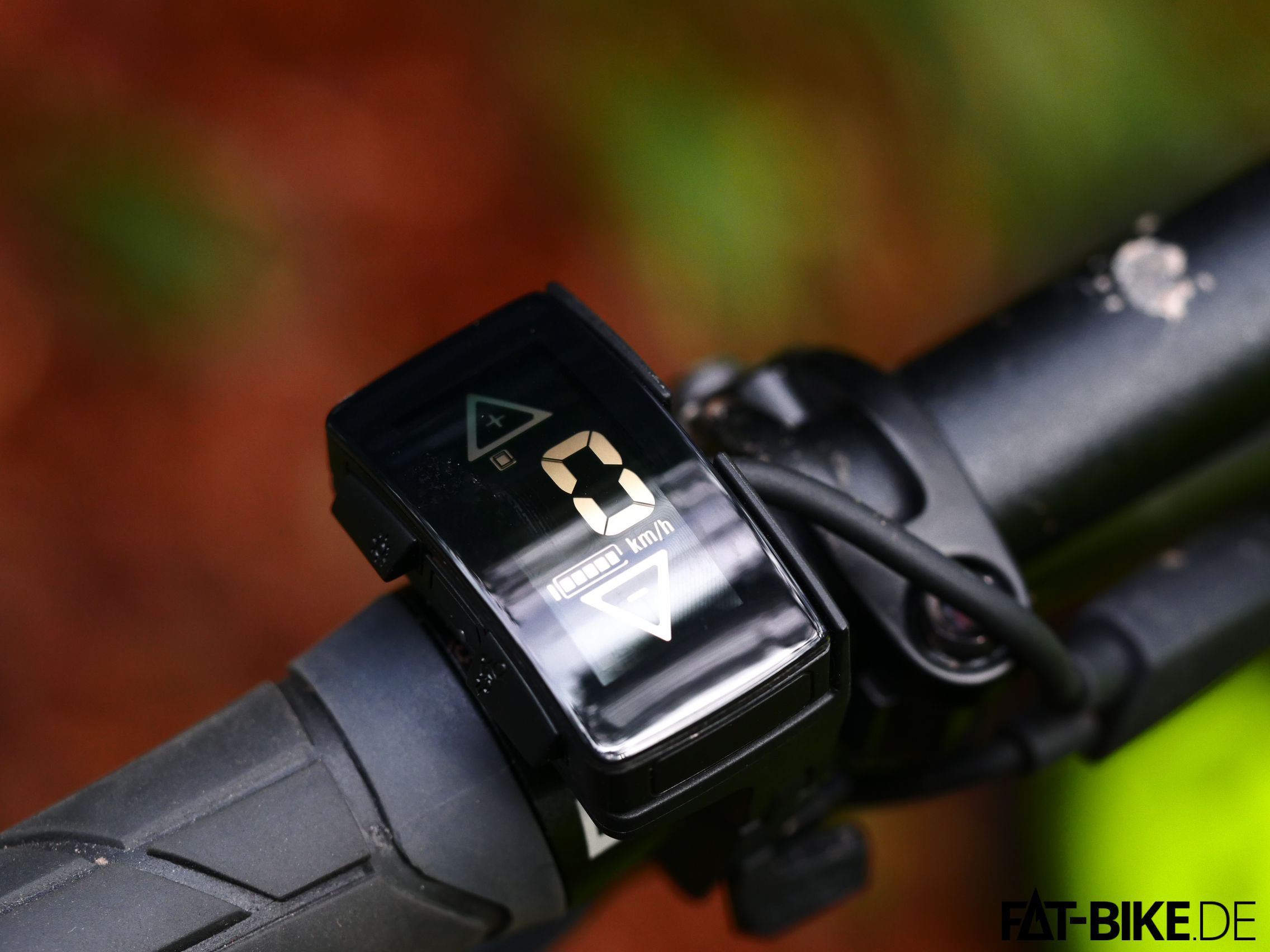 Unfortunately we can't tell you much about the total range of the bike. First of all the software was not yet final. And second there are so many parameters influencing the range that we simply have no way to create something like a standard test cycle.
Let's put it that way: our crude result is „won't die“. That means that after 40km / 800 meters of elevation we still had 3 out of 5 bars of battery life on the display. Okay, we couldn't resist to pedal some parts on our own. And also even stage 1 is so powerful that we hardly used stage 2 or 3. But it really lasts.
If battery is drained re-fuelling is done via a special charger that hopefully can digest whatever current you local grid has. A fully drained battery will take roughly 5 hours to recharge completely. 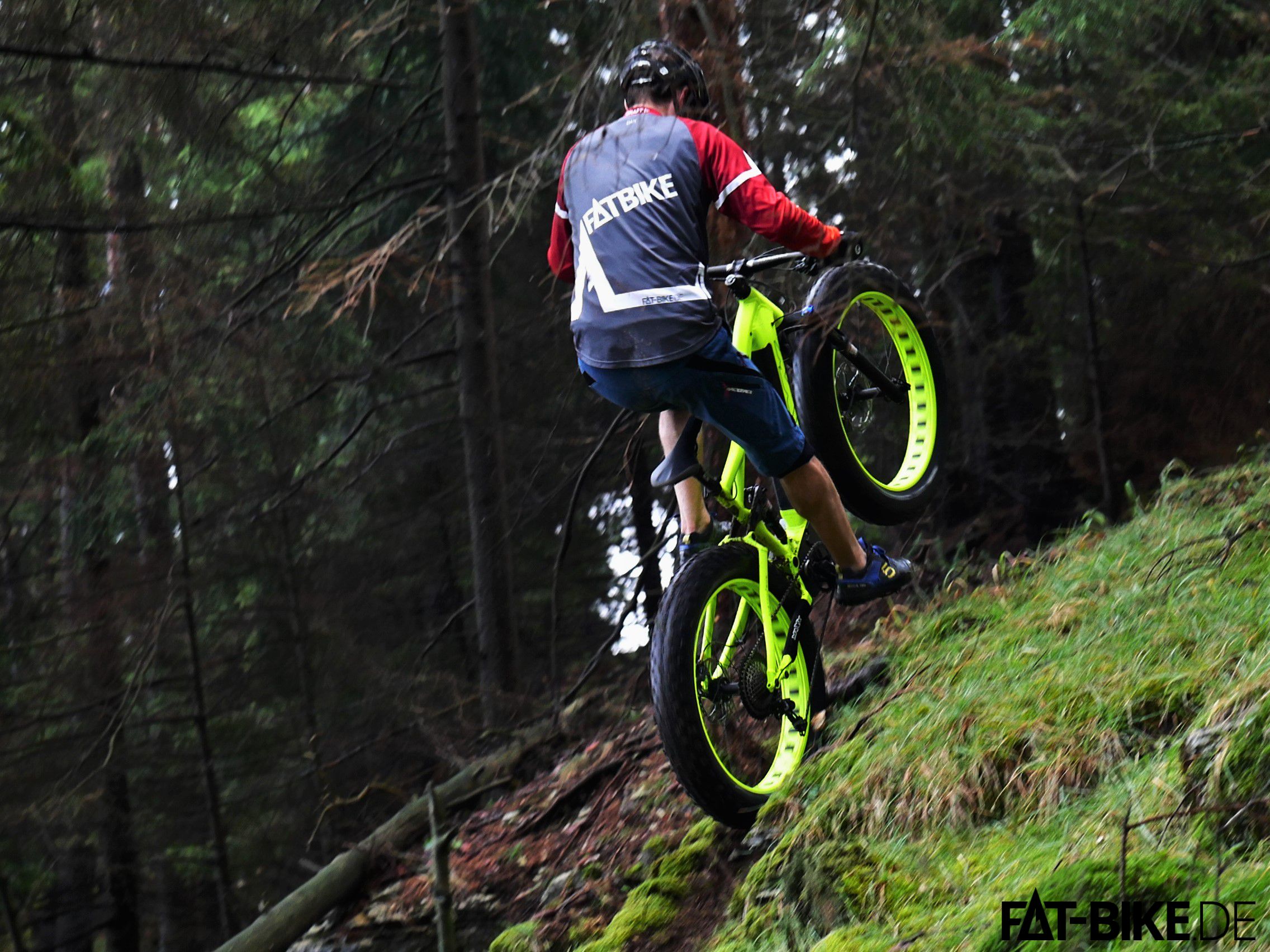 Now let's go back to rough terrain. Taking a look from the side the Maxx Huraxdax EL tested somewhat reminds us on a fighting bull: a slender back, beefy shoulders and head low. Ready to attack! And that's how it rides. With a freshly topped-up battery (of course with energy made from crystal clear Bavarian spring water!) we headed for the nearest forest. Once ignited the Huraxdax EL even on stage 1 (out of 3) relentlessly pumps you along the track. Unless the state-dictated party pooper kicks in to suddenly stop your joyride at 25km/h (16mls/h) even die-hard ebike skeptics can hardly control their grin. It simply is way too much fun to blast over roots and rocks without even losing speed. It's just like being a child on a roller coaster: „MOOOOORE!!!!“. And it's this kind of „more“ that mainly contributed to the circumstance that in the end we fell off this bike – braindead!
Who the hell said that an eFatty does not drain your muscles?!? Every bike does as long as you give it your all! 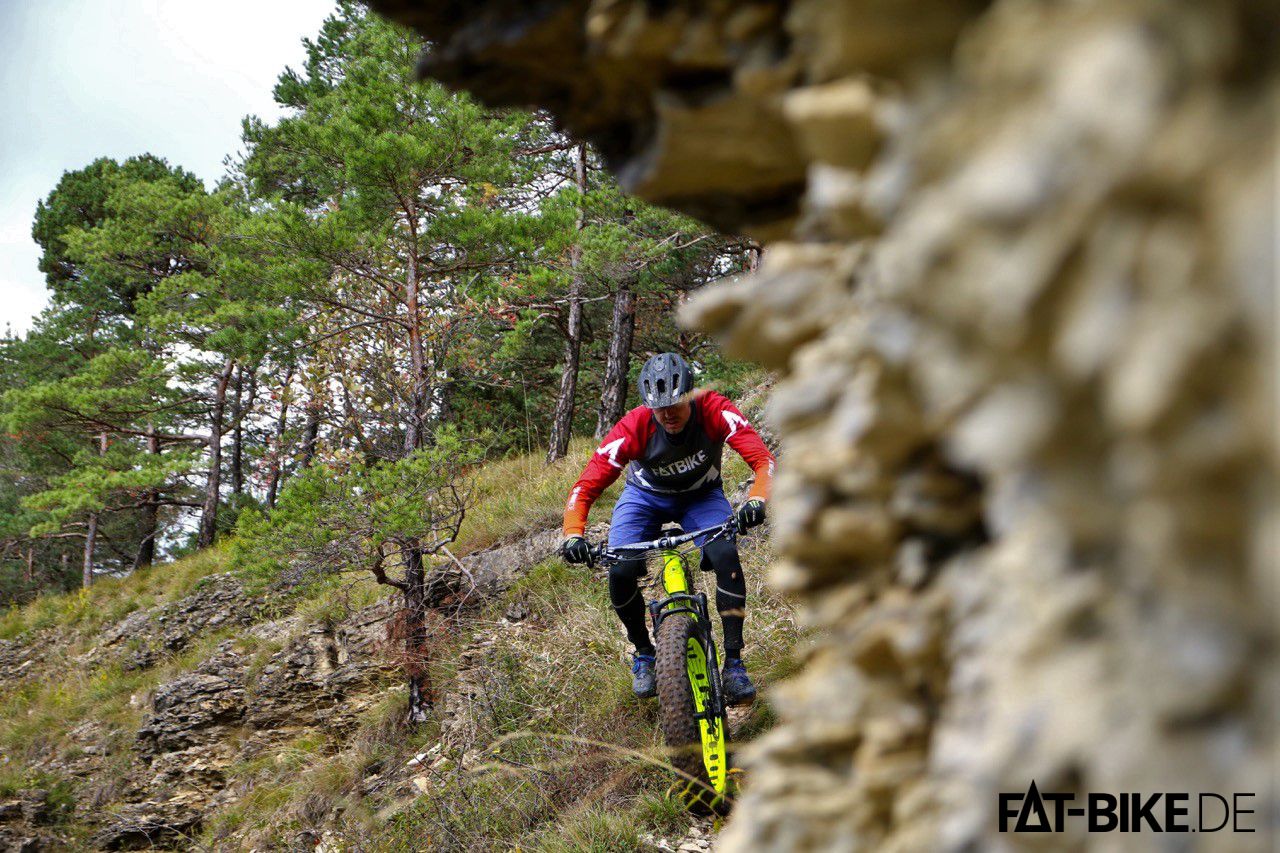 Good to go on a single trail. If it has to.

The engine smoothly starts working and takes just a blink of an eye to plan next steps. Let's call it the „turbo lag“. This lag also is present if you reduce power which in particular in the first days may result in hard gear shift or slipping on wet surfaces. Take a while to practise and it's gonna be okay, though. However one better avoids any shifting under full load as even a day at the dentist's is more attractive than what happens to your chain and sprocket then. In general the whole drive train works most effective when you pedal with a rather high frequency, low load and a perfectly rounded motion.

As we've been riding a Huraxdax as testbike for a year now we very well know this bike and its capabilites. So we took it directly to our favorite downhill and tried something new: ride it UP. So, THAT'S what it can do for us? Freaking awesome!! It's got a built-in shuttle!!! 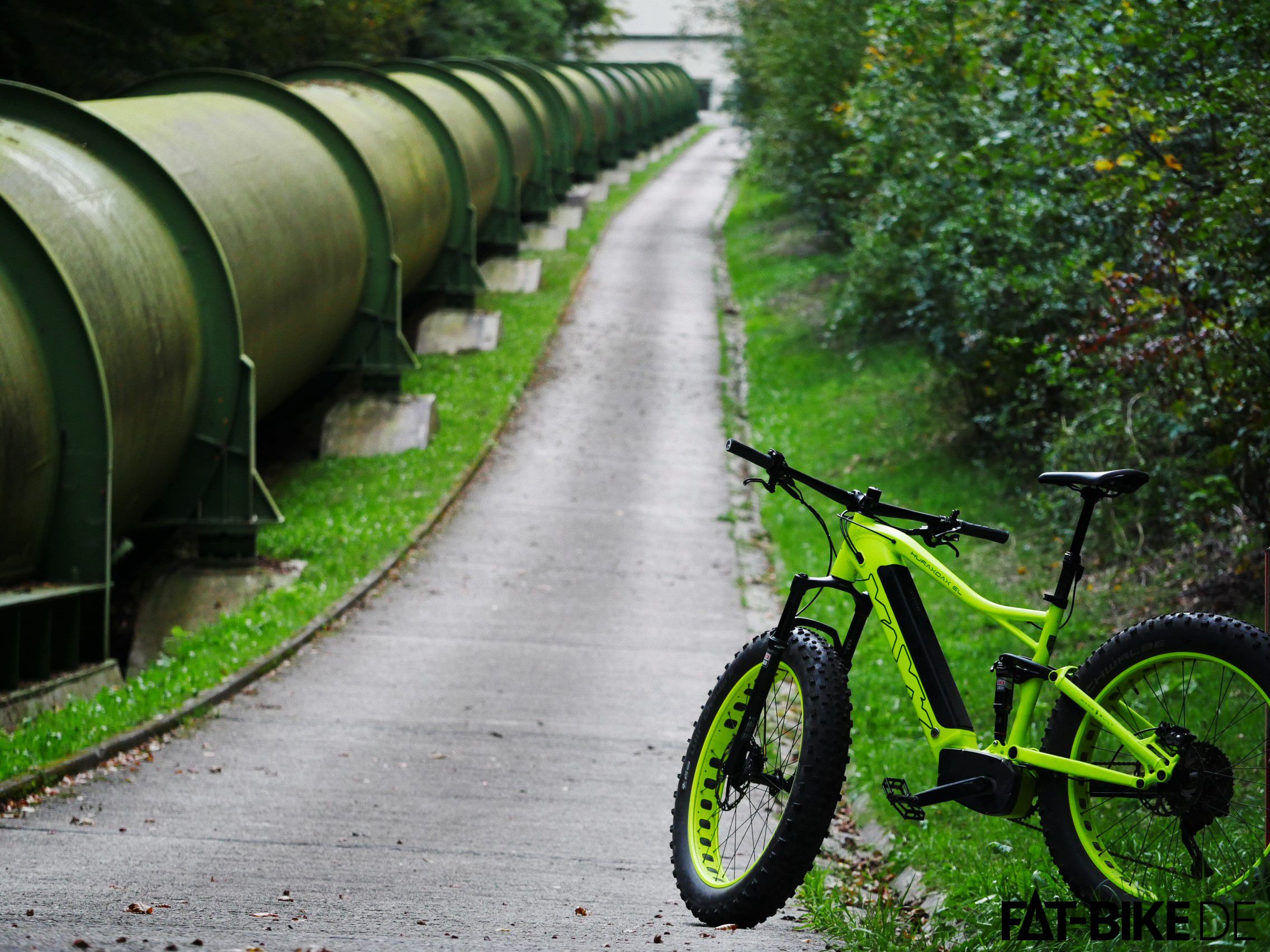 Just ride it up (however this is NOT our favorite downhill 😉 ).

Of course you can also just have a nice and recreative afternoon ride with this bike. Any kind of uphill just seems to melt away and formerly impossible routes get into your focus. The 250 watt motor literally zooms your uphill. And for all of you how consider up-hill to be the ultimate challenge and best training effort we got good news: you can switch it off! A chunky extra weight of 10kg will make the challenge even more ultimate and boost your stamina to unknown hights! 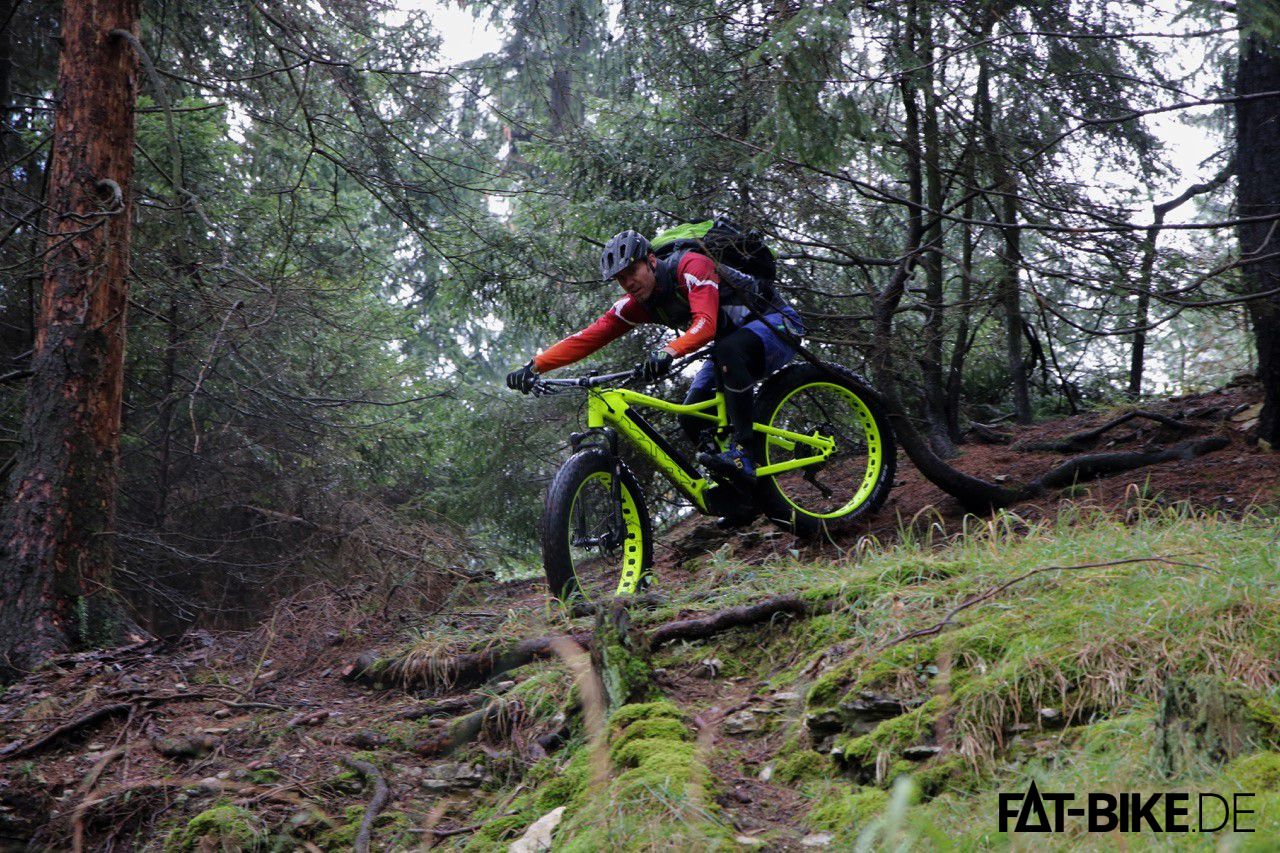 Changing your direction may need some extra power…

Above we draw a comparison to a fighting bull. And there is more common ground: both, bull and Huraxdax are not the most agile mean of transport.
To gain room for the motor Maxx engineers had to stretch the chain stays by 2cm. This comes at the expense of agile handling. Compared to the current model the new Huraxdax EL will have a modified geometry: flatter steering angle, higher bottom bracket and a different fork plus optimized rear shock will improve the ride. These measures not only will improve the handling but also lower the risk of touching ground when pedaling single trails uphill. 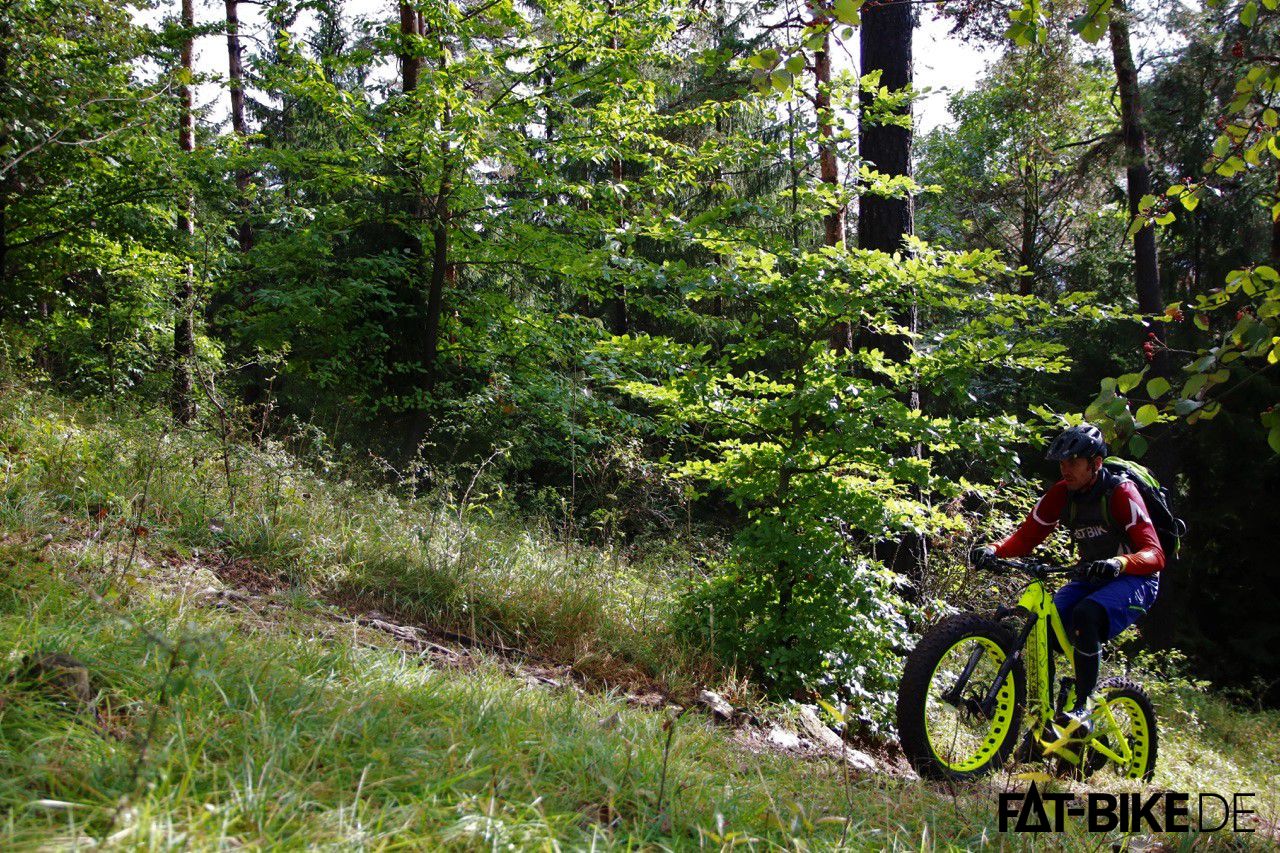 A much bigger – or better heavier issue is the curb weight of nearly 25kg. Of course the motor over-compensates its weight and the Shimano Saint brakes that were clamped on this bike easily control the beast with no sweat. Quick turns however require a lot of body work. And in case one has to carry the bike for a while one might desperately wish to have e-arms and e-legs!
So even daily routines can become painful exercises. After decades of MTB-ing and bike trail maybe we are a little bit stronger that an average male homo sapiens. Nevertheless we didn't do very well when we had to carry the bike down the basement. And trying to cramp it into your station wagon be prepared that your arms might break – or you simply tilt over into your trunk. 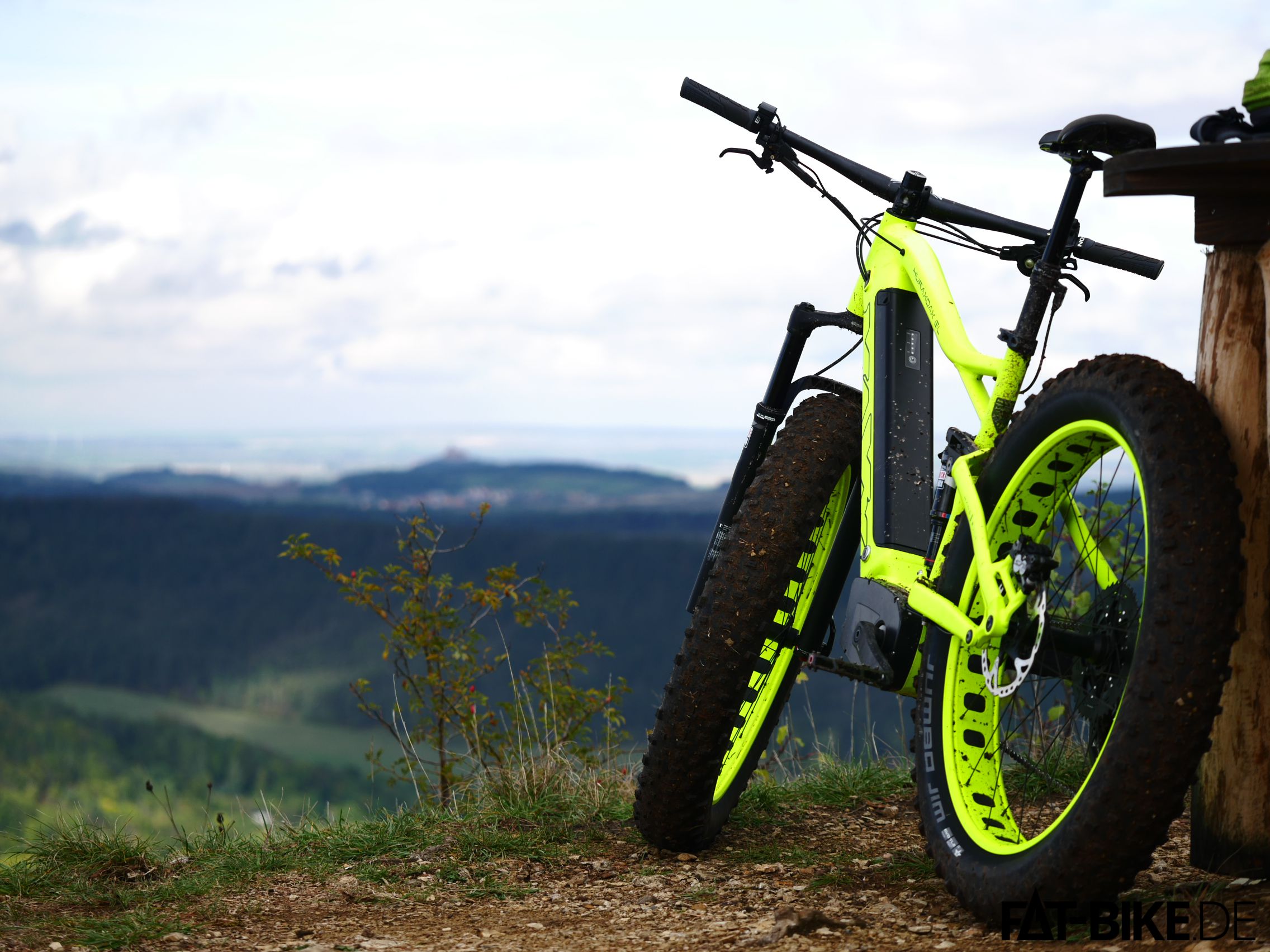 Usually bikes like this one remain not more than a man's fantasy. Not in this case. You can buy it! A couple of days ago Maxx added the Huraxdas EL to their configurator. Just pay 2.299,- Euros for the frame kit or 5.599,- Euros for a complete bike (on XT/SLX basis) and your personal Huraxdax EL will come right to your place.

Personal? Yes! As usual Maxx leaves you plenty of ways to personalize your bike. Choose from a wide range of colors, define your decals and of course alternate parts per your liking. As a nice little extra delicacy Uwe and his team are currently working out a way how to allow customers to even define the software setup when putting your bike together in the configurator.

The only fly in the ointment: there will be no deliveries of bikes before March 2017. Waiting… even better than the real thing! 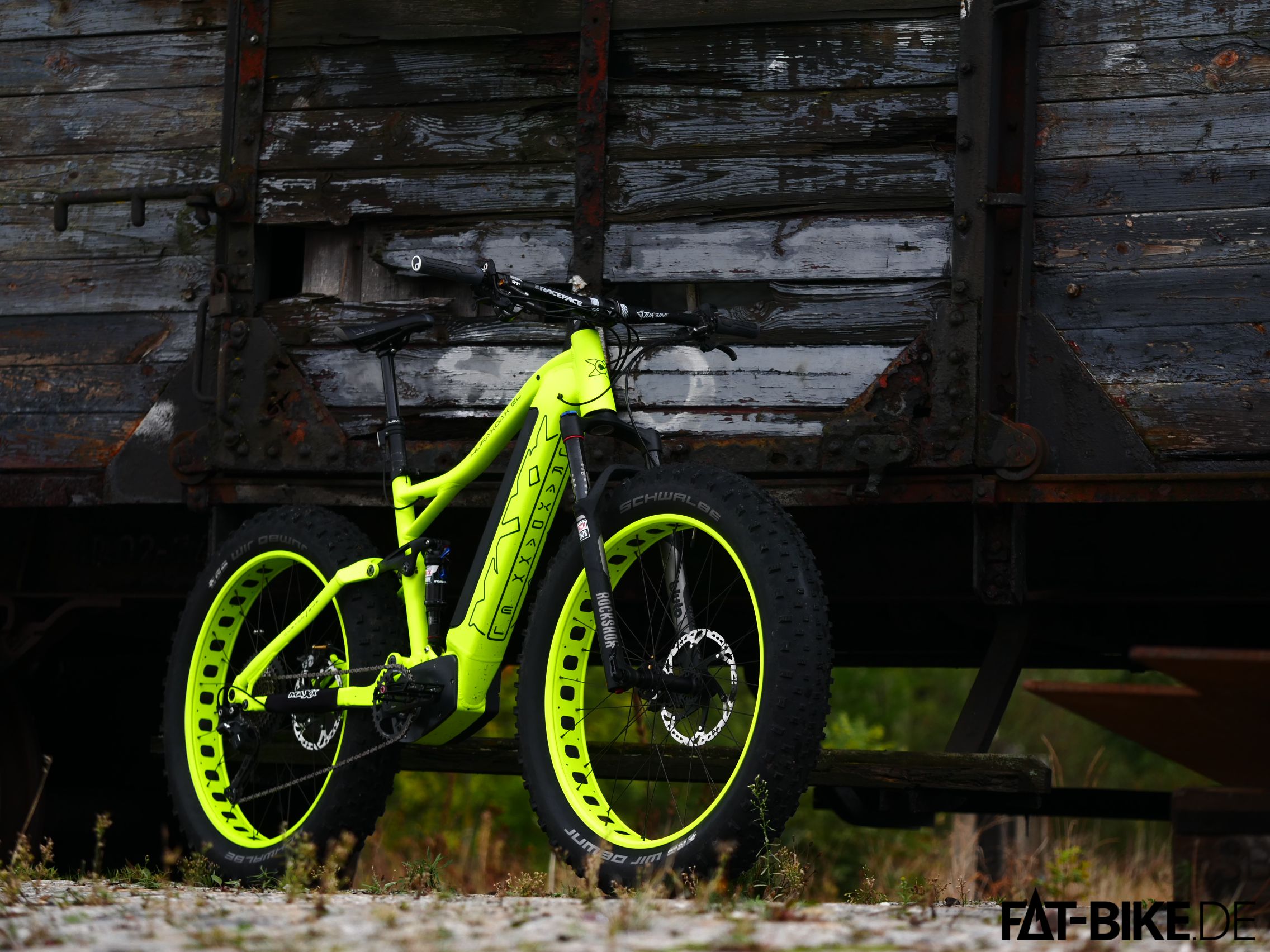 Well… First of all Matt needs a son. Or a doughter. Just someone to tell him or her the story about the man who, against all odds, convinced him of eFATBikes: Uwe Matthies, big chief of Maxx. Having started with lots of doubts in our minds we experienced something new and really thrilling: a combination of FATBiking and moto cross. Even the prototype with its pre-upgrade geometrie and temporary fork was a heavily impressive ride.
„Heavy“ is also the biggest drawback. We hope that manufacturers like Brose, Bosch or Yamaha will come up with much lighter components, soon. Otherwise a drained battery or even simple basement stairs will become serious fun killers.
However our summary out of 4 weeks Huraxdax EL test is clear: try it! This goes not „also“ but „especially“ to eFatty skeptics.

Ah, and by the way – did we ever mention that the stock model will be ready to take 5″ Vee Tire Snow Shoe 2XL tires (soon being tested by us!)? Just think about what this beast can do for you in the winter! We'll find out! 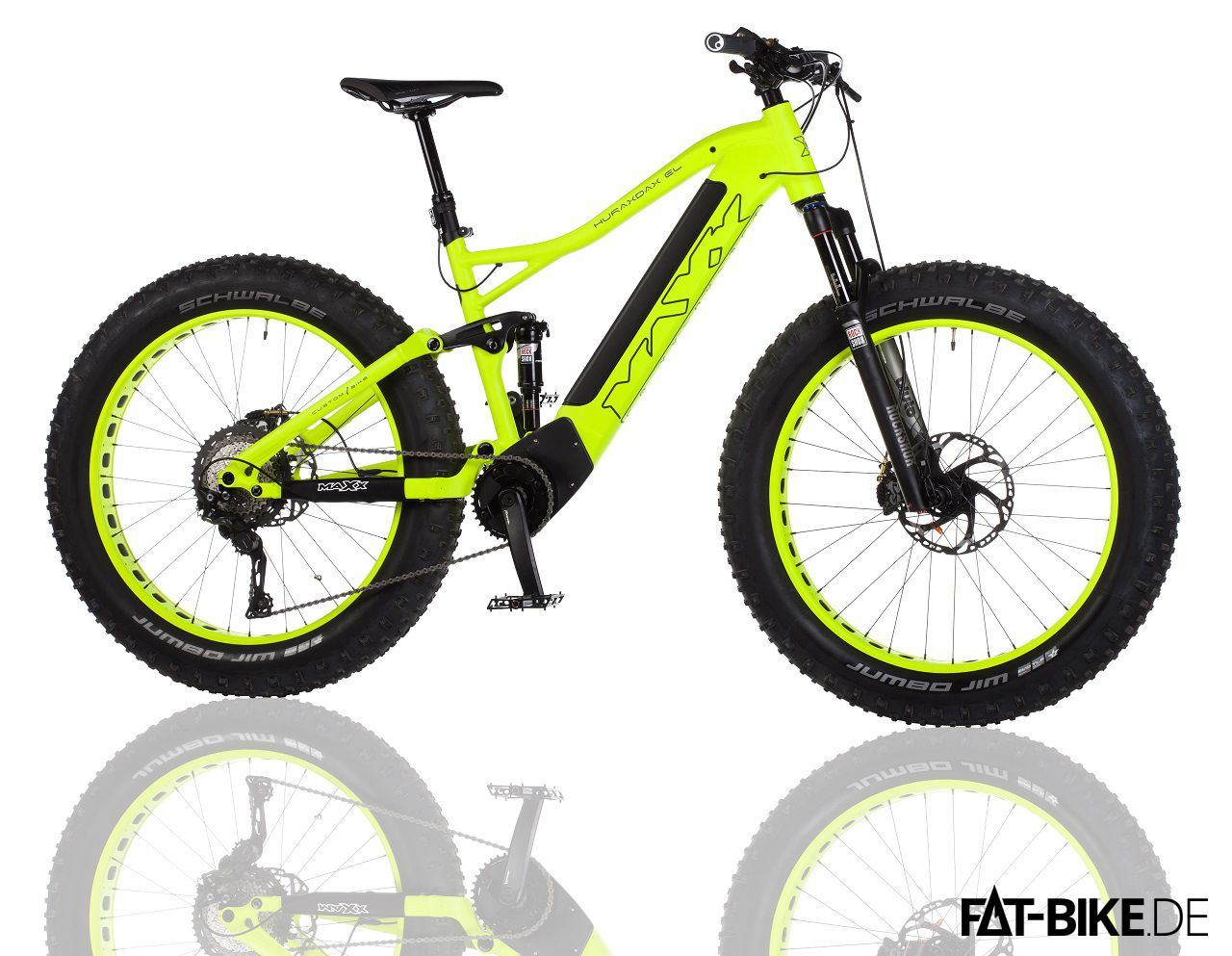