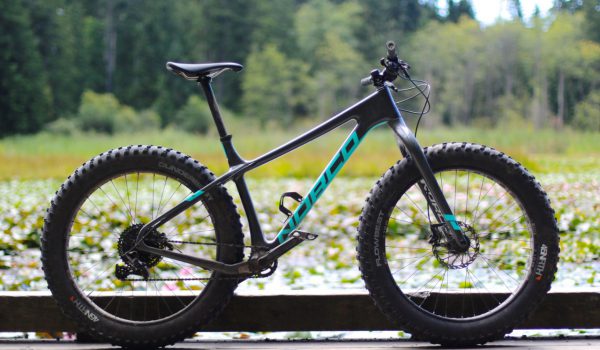 Rumors came up already a couple of months ago that in 2016 a carbon FATBike made in Canada would see the light of the day.
And during our trip to Canada the guys at Norco truly surprised us. Their 2016 Bigfoot– and Sasquatch models along with some 20 and 24 inch kids FATBikes already formed an impressive line-up. And frankly spoken our ideas about who would build this truly Canadian carbon FATBike went into a slightly different direction. However – for 2017 Norco just presented their carbon FATBike series! 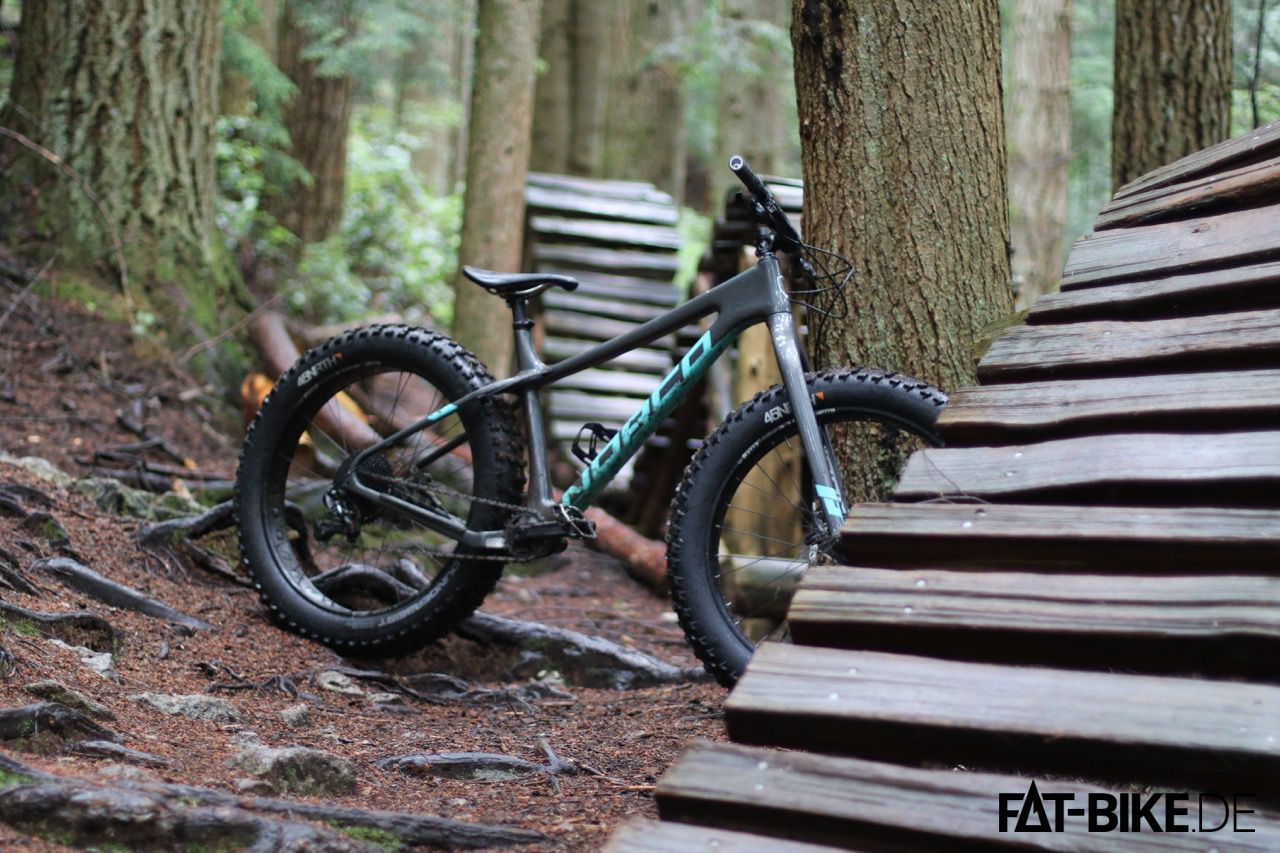 With the Norco Ithaqua FATBike, which lends it's name from a superhuman being of native American legends, Norco clearly underlines it's committment to FATBikes. Different to the already mentioned Bigfoot and Sasquatch models it comes with a splendid carbon frame that – unlike the superhuman giant – weighs in at only 1.350 gramm (2.7 pound).

The Norco Ithaqua was launched just today and we have a very special highlight: besides technical data and specifications we exclusively had the chance to test drive Norco's latest hit. And as an extra pleasure we've added a short video we took during our test rides which – of course – lead us across the legendary North Shore Trails of Vancouver.

What's it all about?

Let's start with some theoretical stuff. Carbon FATBikes so far are a rare occasion. You can have a stock frame made in China that is labeled to your order… But the Norco Ithaqua frame was truly developed by Norco and is therefore unique. Moreover with the Ithaqua Norco hits a new category of trail optimized FATBikes that feature aggressive geometry and low weight. 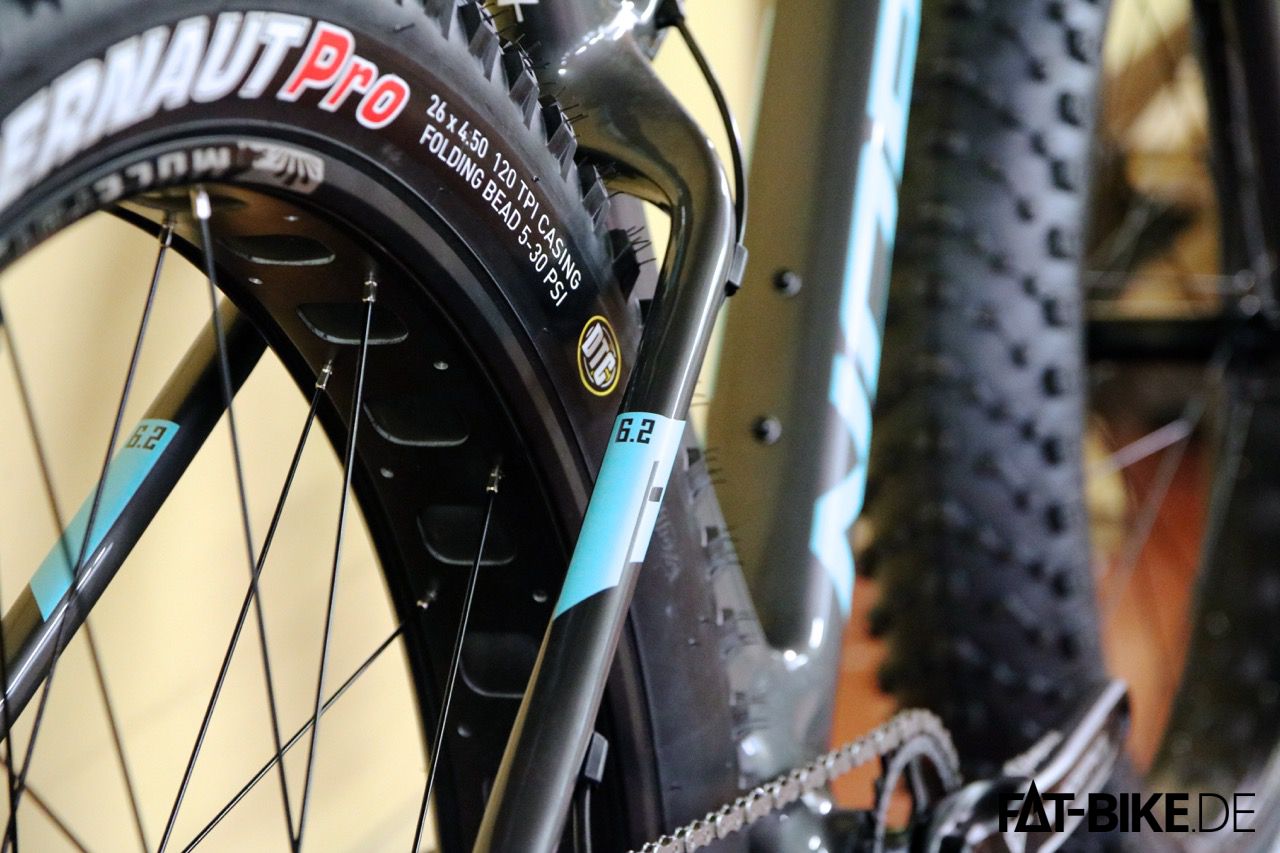 We tested the Norco Ithaqua 6.2 that is equipped with a lighweight (700 gram/ 1.5 pound) carbon fork. Fork and frame are featuring modern through-axle systems that boost stiffness and overall strength. Another modern feature is the rear brake mount that is on the chainstay. Also the geometry is prepared to swap the superlight carbon fork to a suspension fork.
Sram's latest Level TL disc brakes add little weight but plenty of stopping power that fights acceleration provided by either gravity or the Sram GX1 drive train. The latter comes with a 11-42 cassette sprocket and a 28 theeth chainring clamped onto Race Face Turbine cranks. 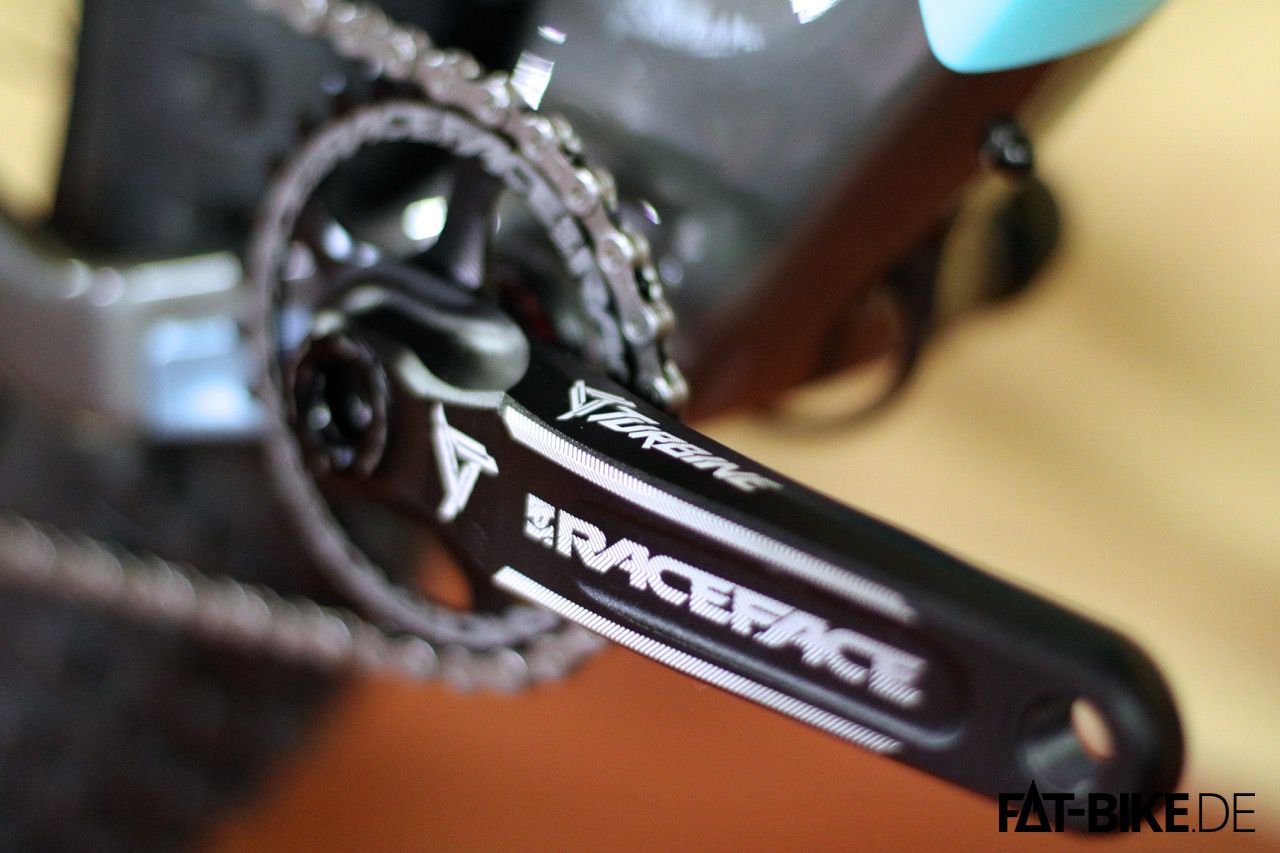 Show me your RaceFace!

The stock tires will be Kenda Juggernaut Pro 4.5 mounted on SunRingle MüleFüt Rims. They are tubeless ready and thereby a great basis to chop some more weight. According to Norco both, frame and fork, provide enough space to digest monstrous 5 inch tires. We will verify this a.s.a.p. using a pair of VeeTire Snow Show 2XL tires.
With in-line cable routing and a pretty decent grey/turquoise paintjob the Norco Ithaqua is a nice and noble piece of a bike. 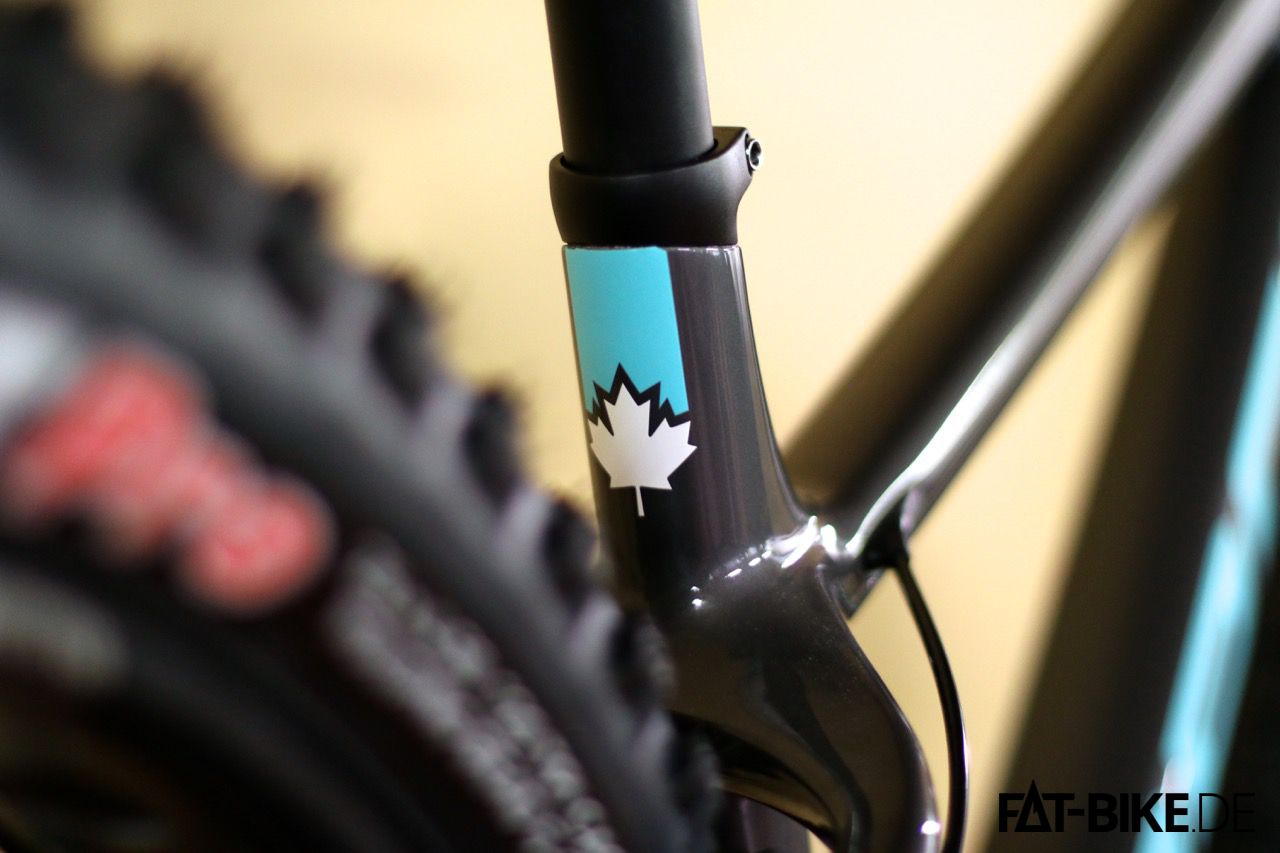 Tell me where you're from…

A small maple leaf at the seat tube also gives a hint where this beauty was made. By the way: also parts such as headset or seatpost are bearing the Norco label. The saddle which is made by SDG (it's a Duster RL to be precise) was color-coded to match the Ithaqua's appearence. To link rider and bike a  760mm wide RaceFace Turbine handlebar including a matching 35mm Turbine stem were added to the Norco Ithaqua 6.2. 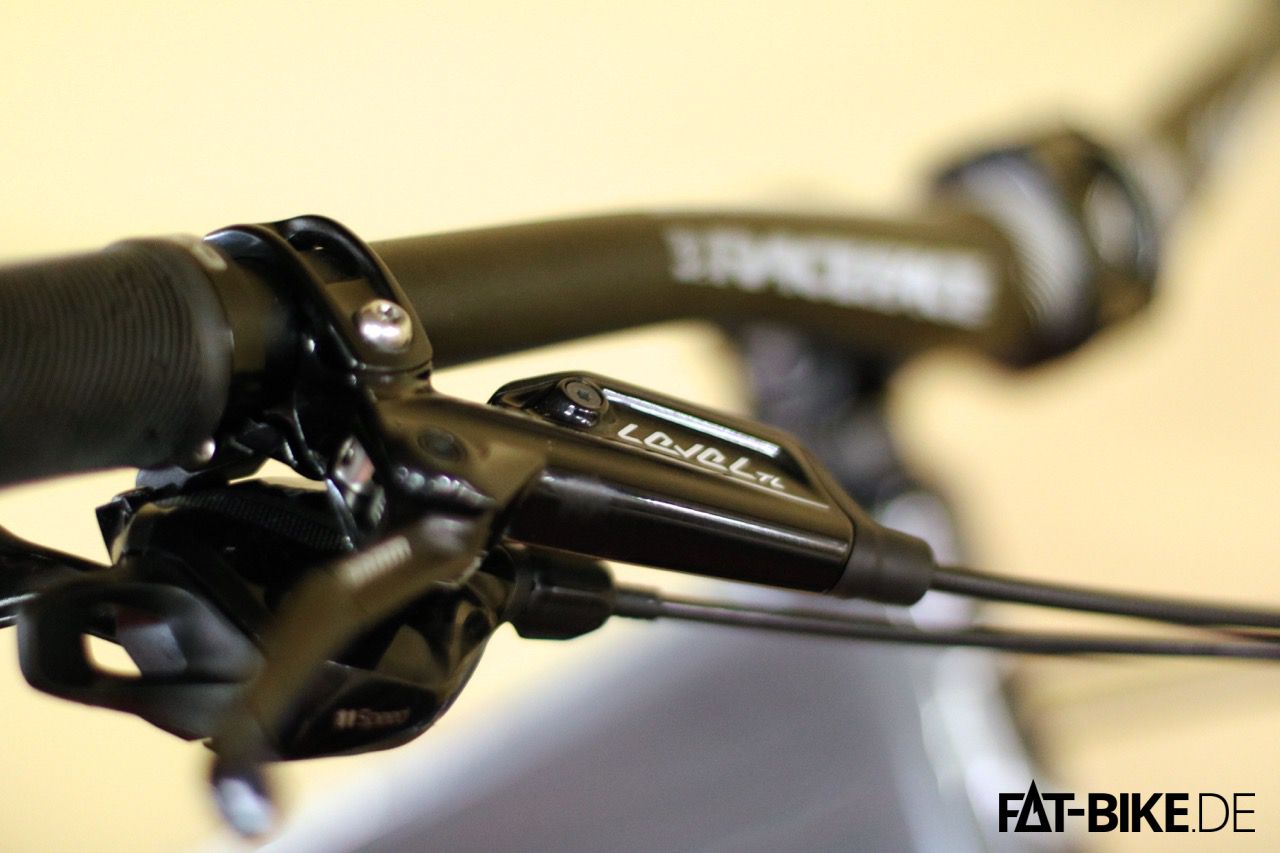 The Norco Ithaqua on the run

Nuff said! Time for some riding pleasure! As said we were given the exclusive chance to test-drive a near-series prototype of the Norco Ithaqua 6.2. And to complete our enjoyment we did this on some of the most beautiful and toughest trails on this planet: in Vancouver's famous North Shore area. 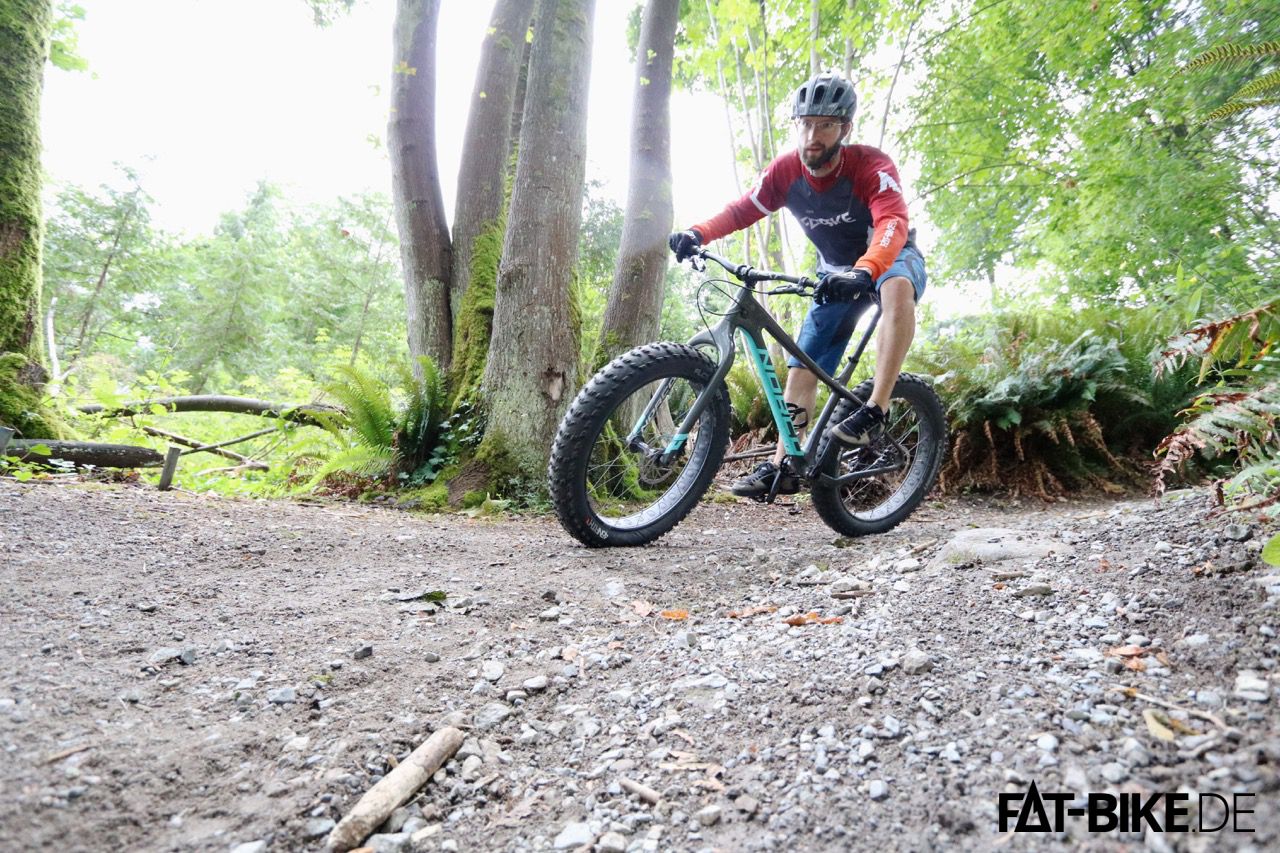 Touch base – Dan and Ithaqua

Being kinda oldschool riders we used our bikes to conquer the 20km ride from downtown Vancouver to Mt. Fromme. What a pleasure! Different to the standard equipment our Ithaqua was running on 45NRTH Flowbeist and Dunderbeist instead of Kenda Juggernaut Pro tires. However this was not a drawback as they are just great.
The size large frame well accomodated our 1,86 (1.6ft) bodies. Thanks to the well balanced seat angle we could seriously push the bike over concrete roads and sidewalks. However in this case not sky is the limit but the tiny 28 teeth chainring that limits speed and pleasure likewise. We would definitely opt for a 30 or even 32 teeth version for daily riding. 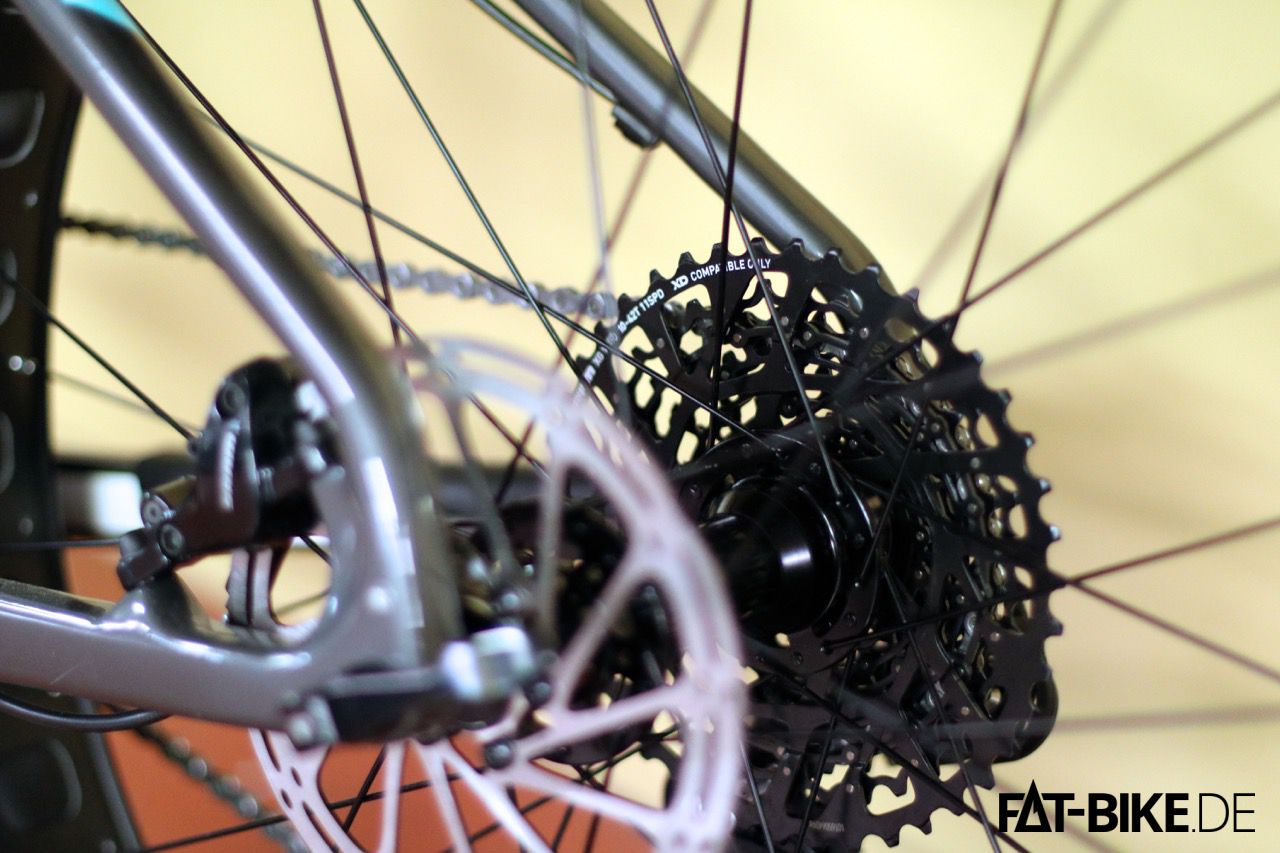 To eventually reach the entry of our desired trails we also had to pedal up a couple 100 meters of elevation; this mostly happens on gravel roads. But even cutting corners (or in this case: switchbacks) the Norco Ithaqua's climbing performance was awesome. The massive tires and the low overall weight are giving wings. 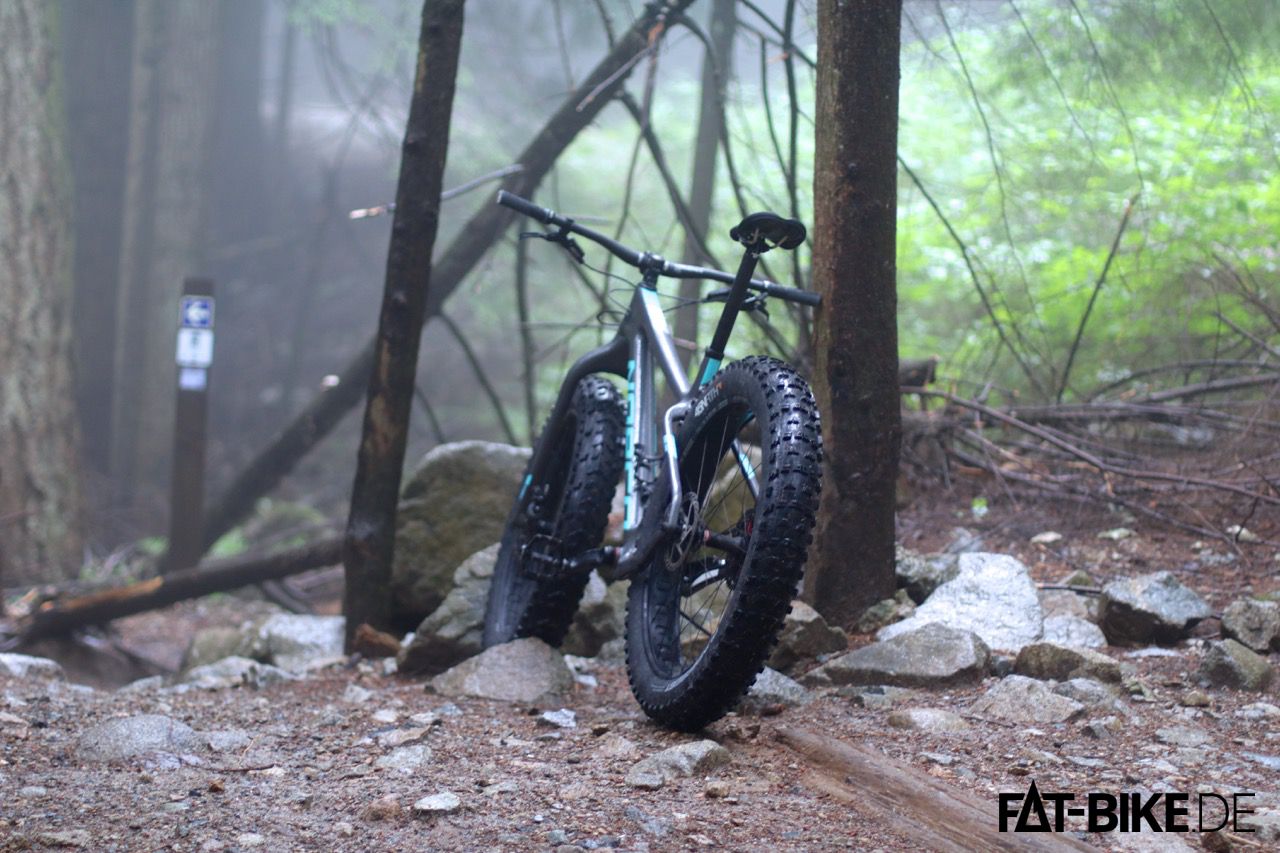 Best trails on earth ahead of the Ithaqua

Excitement rises as we approach the entry of the legendary „7th Secret“ trail. How would this ballistic carbon weapon perform? In particular when there is no suspension fork? 7th Secret can be an unforgiving beast if you don't respect it…
And we didn't perform very well on the first few meters – clearly a matter of lacking respect. But once we got into it the 4.6 inch 45NRTH tires took over and we flew over the trail. The Norco Ithaqua quickly mutated into a nimble and agile trailbike that was eating corners and guzzling roots and rocks. The relatively slack fork angle of 69°, the short stem and the extremely short chainstay lenght of only 445mm made some clear advantages here! 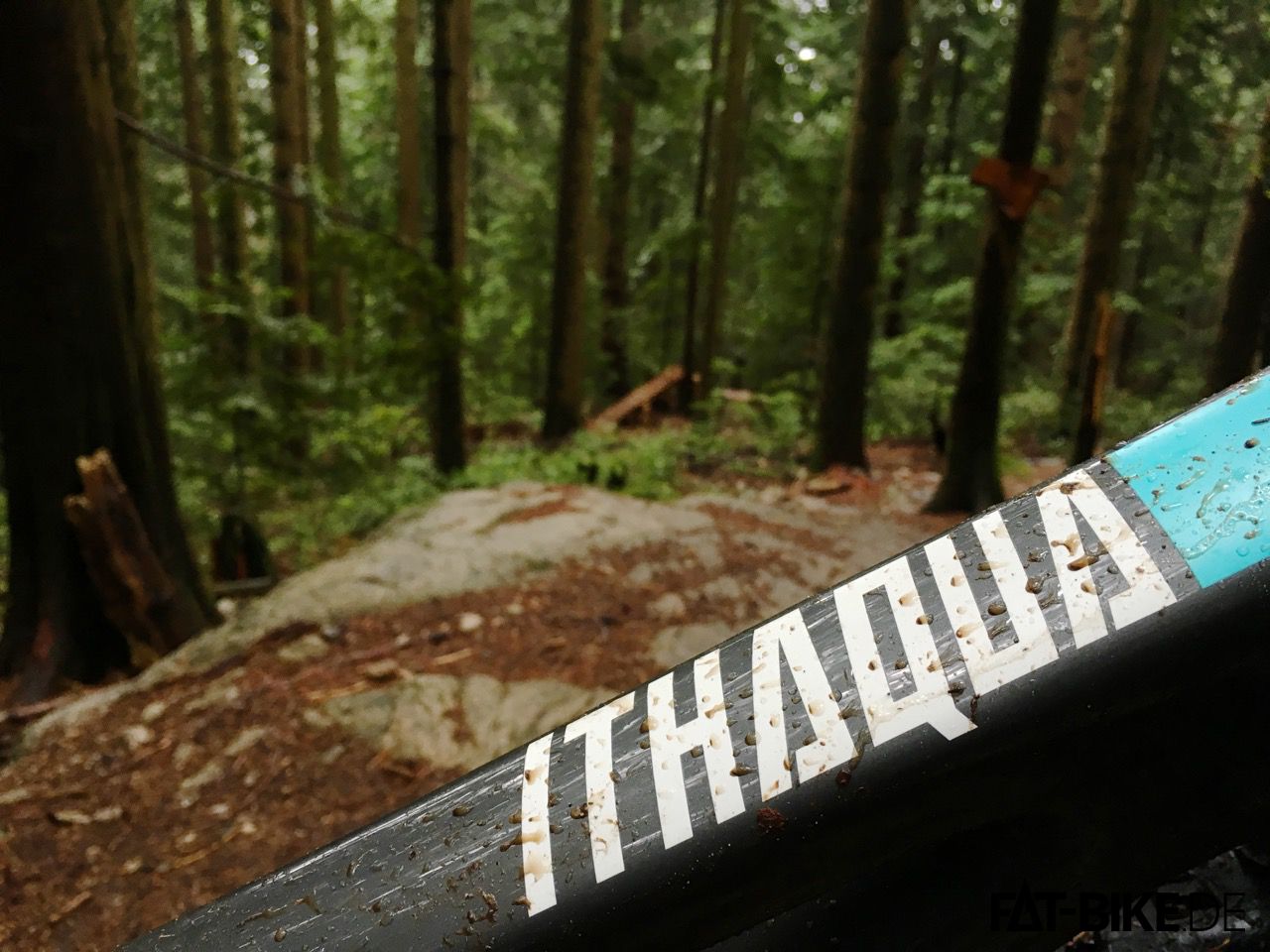 Aiming at roots and gaps

It may be a matter of taste but we'd prefer some bigger brake rotors instead of the stock 180/160mm version. Not that the brake performance was bad in general but there is room for improvement. The non suspended front end made it easy to play with the rear wheel and avoided an unprecise and sluggish handling during trial passages.
Our prototype was not equipped with a dropper post (which will be standard on the Norco Ithaqua 6.2) however in the „Shore“ this is not an issue. Drop it when you enter the trails and pull it out once you hit Braemar Road. Simple as that. 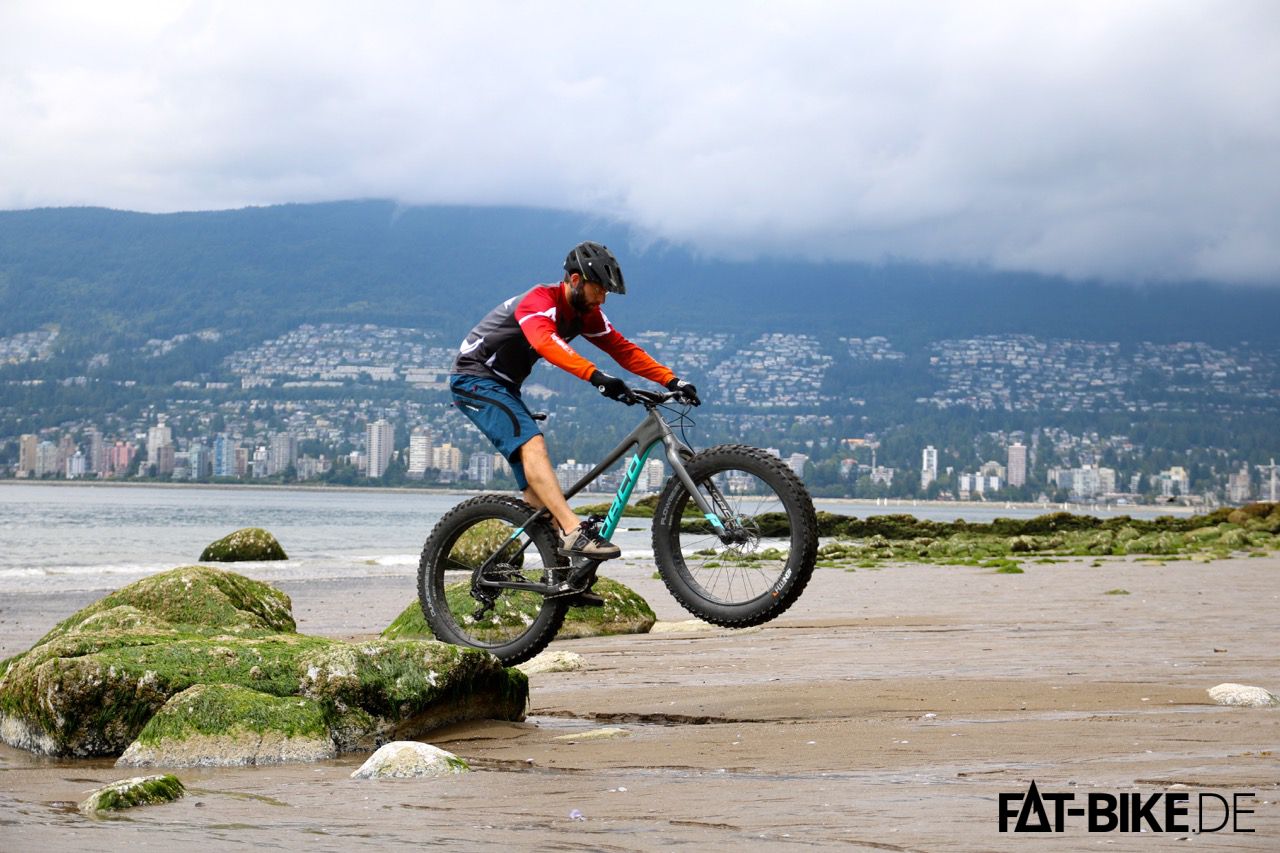 Maintaining your balance on a skinnie section or any other woodwork is crucial in the „Shore“ as otherwise you might hit the hostile rain forest floor. But no worry: thanks the the low center of gravity and the very agile handling you can precisely direct the Norco Ithaqua along any trail. It was developed for that kind of riding and well, you can feel it!

After plenty of single and double black diamond trails we only wanted one thing: DO IT AGAIN!!!! However there were another 20km to ride to get back downtown and also there were some cans of chilled Canadian craft beer in our fridge… So we decided to ride home and have a beer or two in the sunshine. 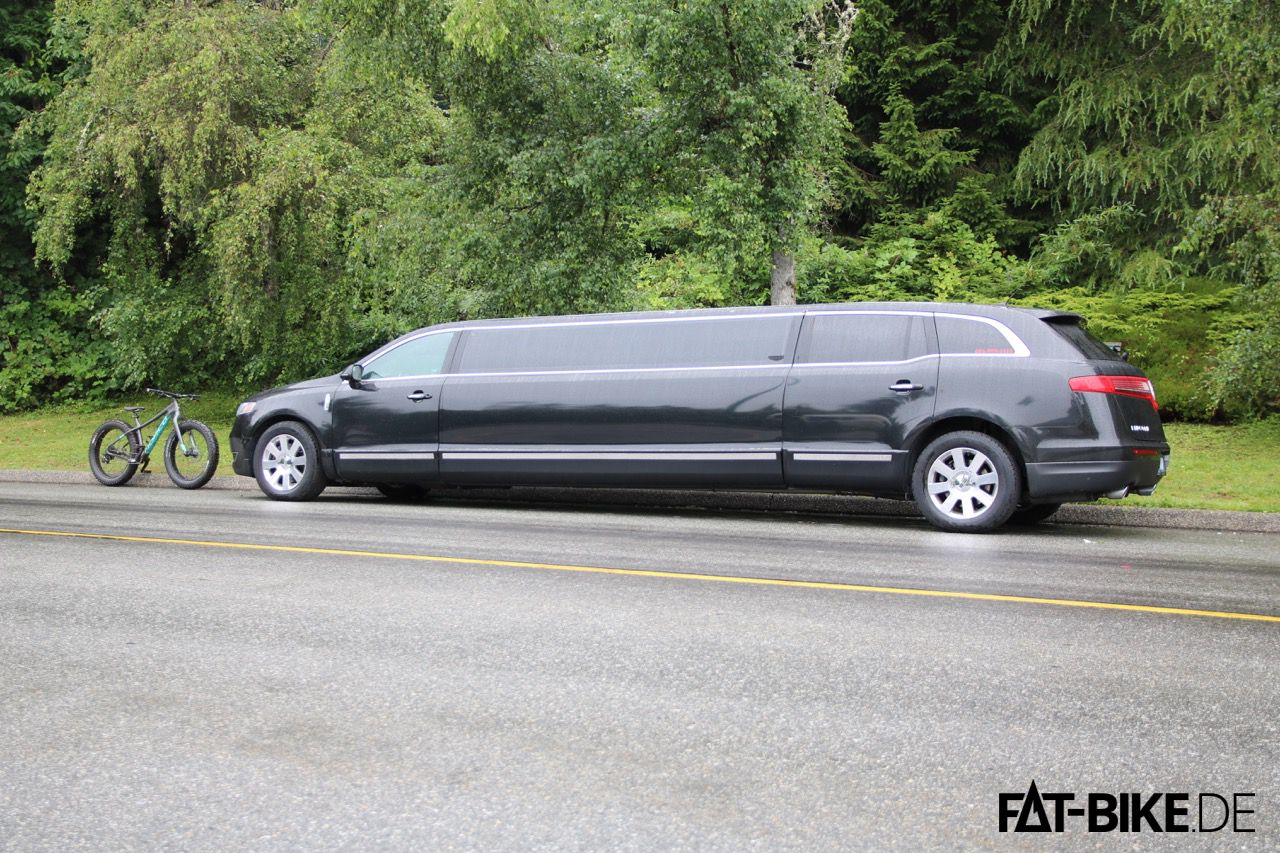 From our side we're first and foremost more than happy that with Norco another manufacturer presents a high end carbon FATBike. We're even more happy that it's a Canadian brand as we have a certain dedication for Canada…
The broad portfolio of Norco FATBikes already in the past covered a wide range of riding preferences. The Ithaqua, being the 3rd line-up, will be a tough nut for the common european top dogs.

Over here in Europe you'll have to hand over 3.199,- Euros to your bike dealer if you want to own the complete 6.2 build. A frame will change owner for 1.999,- Euros. And we think you get a lot of bang for the buck!
However you'll have to wait until end of October or early November before the Ithaqua reaches the old continent. Canadians can right now walk to their shop and get their own monster. Lucky you!
As soon as we get our hands on a standard model we will also add information about the final weight! 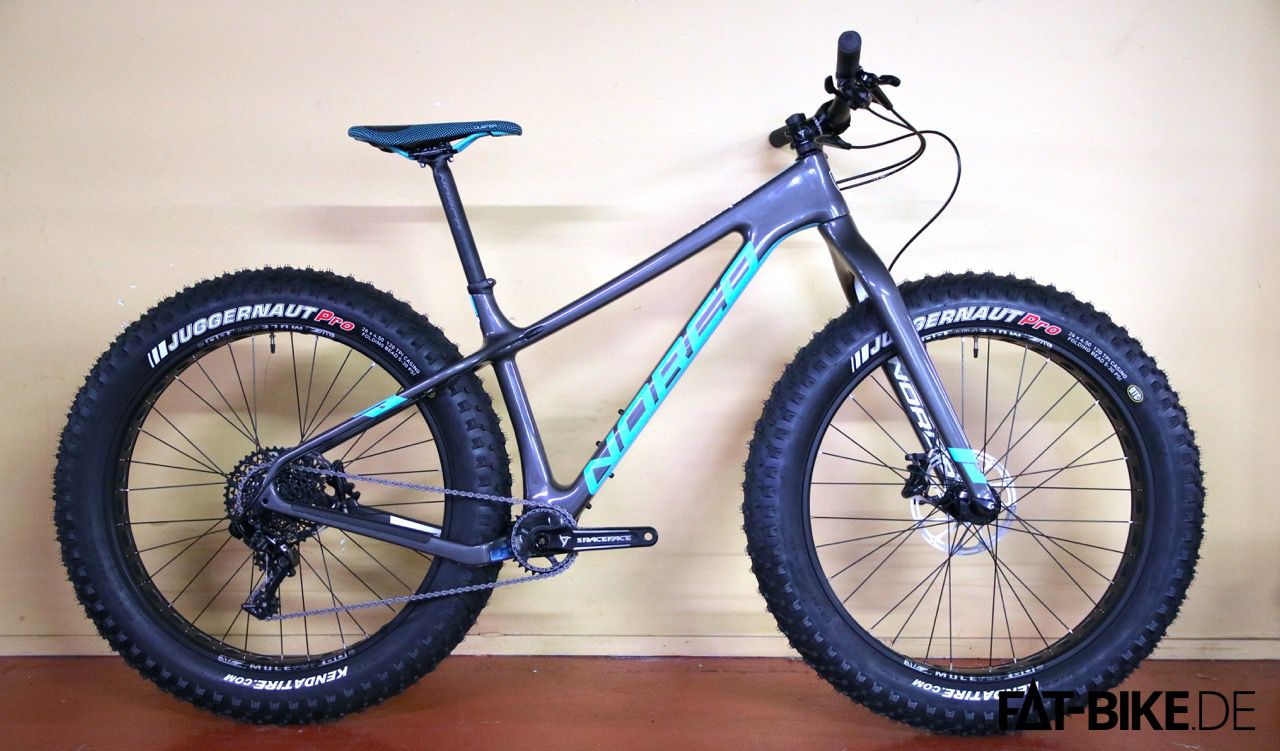 Looks hot but is standard: Ithaqua 6.2

Also we are working on some background stories about the Norco Ithaqua and other Norco FATBikes. E.g. we've spoken with the product manager Paul. Stay tuned to read about interesting things and facts!