Space… The final frontier… In 2015 mankind has landed a probe on an asteroid, flown to Pluto and found evidence for liquid water on Mars, I guess. What a hell of great locations for a legendary FATBike ride! However as Mars was a tad bit too far out for us we did our 2015 testing of eFatties, cranks, FATFullies and gearing hubs on good old planet earth.

And unrecognized by public we have been testing the Specialized FatBoy Pro for the whole year. And it has proven to have a variety of skill and to be a massive fun booster in everyday life.

The best part: the FatBoy Pro will be sold in 2016 as well – slightly renamed into FatBoy Pro Trail. As parts and frame will remain unchanged one could say that here you read the first long term test of the 2016 Specialized FatBoy Pro Trail. Well… one COULD…

However, let's get down to business! 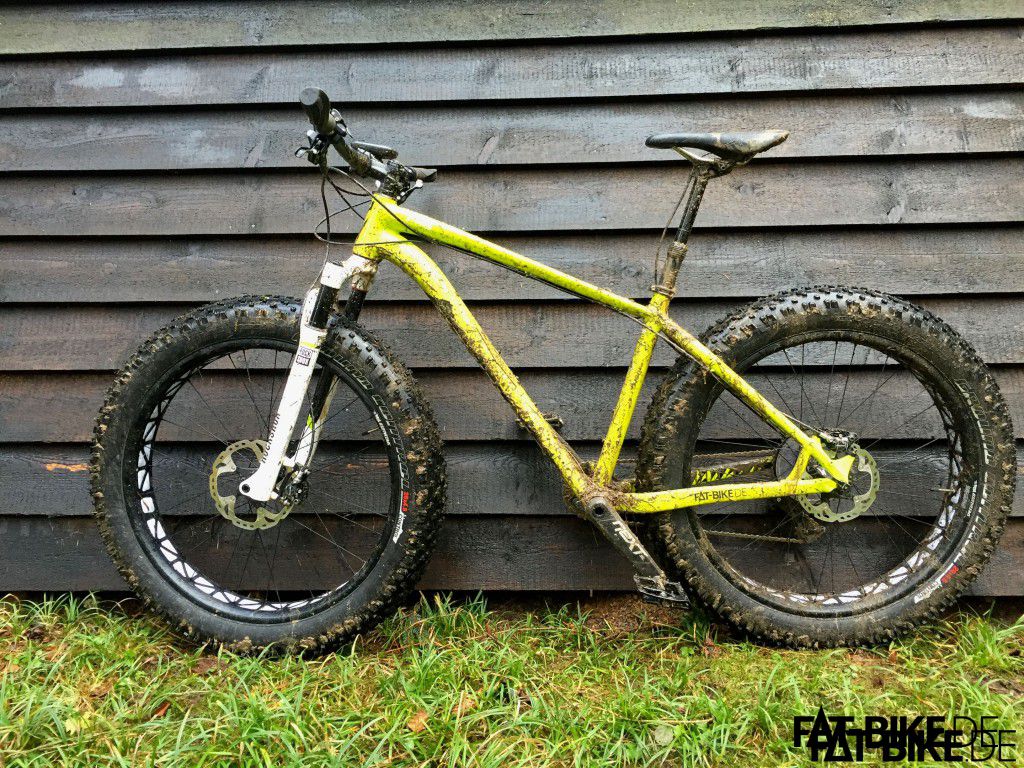 Planet Earth, December 2014. In front of Matts Christmas tree we unboxed our new Specialized FatBoy Pro. Not Santa brought them but a guy we like nearly as much as him: our man at Specialized. First impression: chunky color! Good to know that the scratch and impact resistant coating of the FatBoy frame can easily withstand stone-chipping – and your teeth.
The frame is well made and has a high resilience. Also under severe conditions as during our FATBike Enduro it has proven to be stiff and snappy in handling. 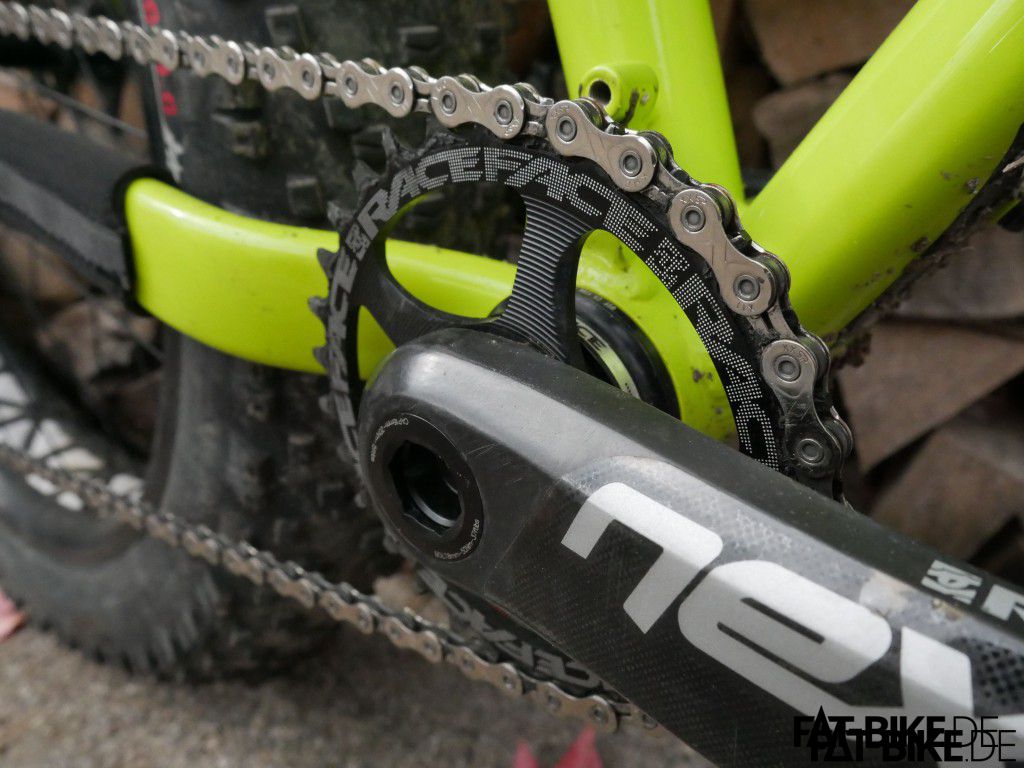 Awesome! Beyond the Race Face chain ring you can see the front derailleur socket!

Specialized sticks with the concept of quick release at the rear end. This may seem a bit antiquated. However we're not huge fans of the through axle trend on FATBikes. That's simply because the biggest advantage of through axles – enhanced stiffness – is not worth a rush on FATBikes. The FatBoys stiff rear end can easily rival any through-axle FATBike. On the other hand through axles may make your life complicated as in worst case they may get stuck and won't open in emergency – as it happened to our FAT Five rider Tobi during the FATBike Enduro.
Overall the FatBoy Pro frame provides an outstanding weight-to-stability ratio. And its details (just take the front derailleur mount) make it very flexible to use. Ready for space! 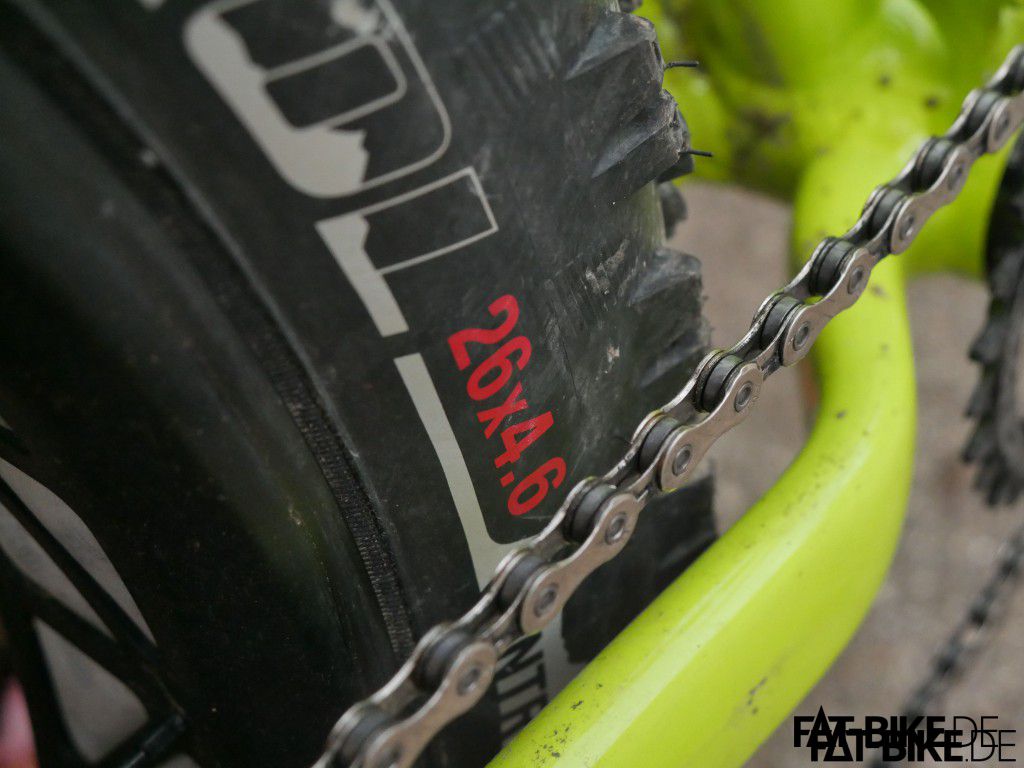 On a sandy planet there are two things you need: super wide tires and loads of: GRIP! As said, Mars was a bit too far away but we have tested the Specialized Ground Control Fat 4.6 tires on terrestrial snow, sand, gravel and mud. And here they make a great job! A tad bit more pressure removes a sometimes balky, sticky feel. So the FatBoy Pro rolls smooth, bites his teeth into the ground, cuts corners and digs through knee deep mud. And in case you get lost on Mars you can unhurriedly breath the air out of your FatBoy tires whilst you are waiting for rescue!

In 2015 the hubs are equipped with bullet proof stainless steel spindles. The additional weight is a good investment over the previous aluminum version. The bearings show a slightly rough running after one season. It's far away from being critical and for sure a huge improvement over the first series.

The Specialized FatBoy SL rims for sure belong to the best FATBike parts your money can buy. Less than 700 grams paired with 90mm width truly hits the mark. The only kinda „natural enemies“ are hard punches by large rocks that may dent the flanges. However in such cases a plucky treatment with your pipe tongs fixes the issue. 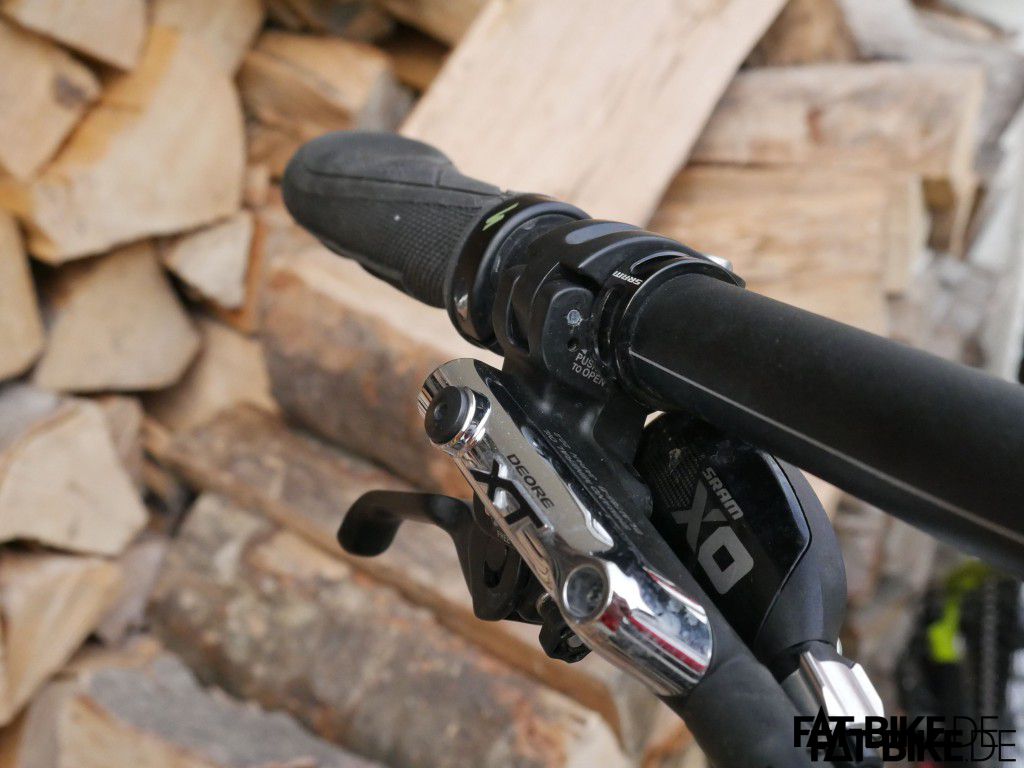 Let's speak about power. Even with no on-board Warp Core the FatBoy Pro gets damn fast. And many of you may think of what this now leads to… Breaks… Our favorite. When we had our first contact with the 2015 Specialized FatBoy Pro we highly appreciated Specialized's decision to eventually mount proper brakes onto a FATBike. Meanwhilst we're a bit ambivalent. During daily grind: fair enough. But as the trail gets steep, the ride gets fast or the rider gets FAT the brake eats up kinetic energy a bit sluggish.
Putting lipstick on the pig is useless. In case you intend to beat the shit out of your FatBoy you should consider a proper brake. A 203mm rotor helps but if you're serious about it treat your bike with a solid four caliper anchor. 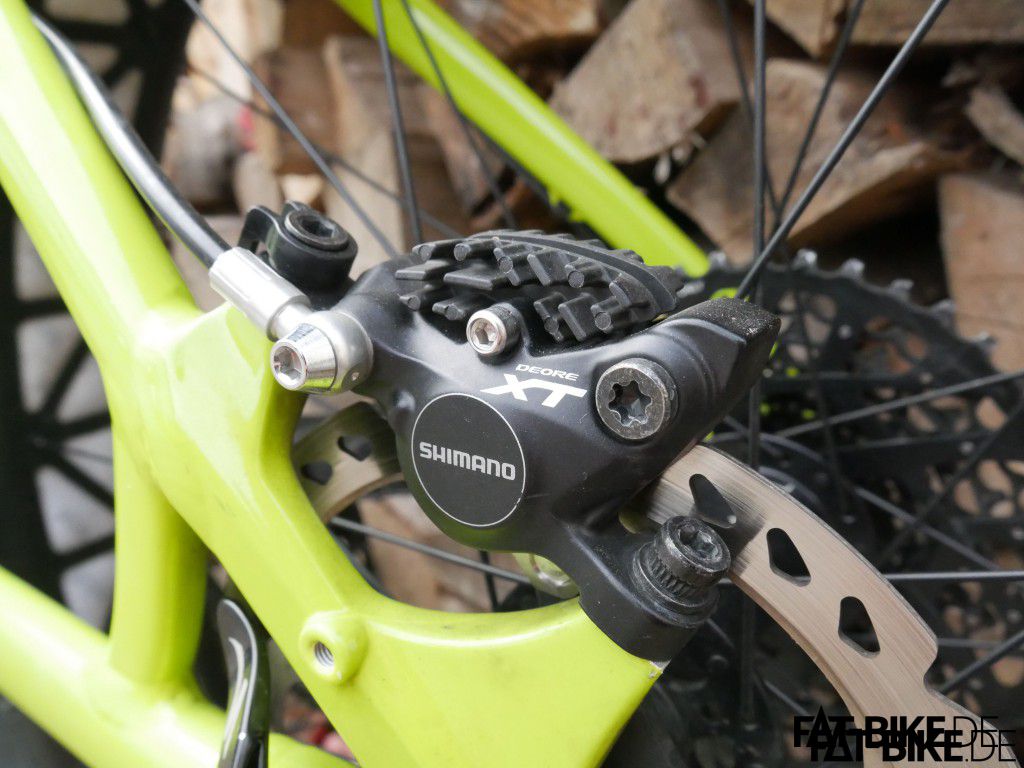 With the drive train it's the opposite: here we started off with a healthy aversion to SRAM's 1×11 system. However in the meantime we got closer to it. The limits of this system remain unchanged: uphill you need some extra punch in your legs. And back down the hill your active part in accelerating the bike ends too soon.
On the other hand this system reduces the number of components and in turn saves on weight. 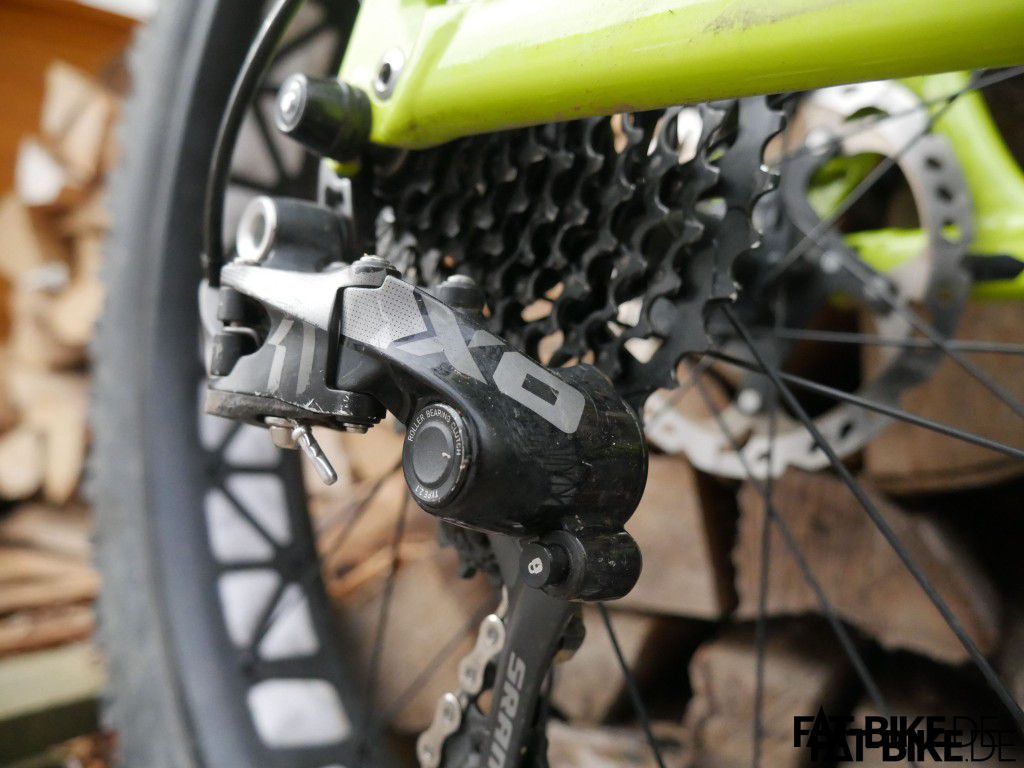 During the last 10 months the drive train has shown being as rock solid and resistant against wear. Due to a slightly different shifter transmission ratio the SRAM system doesn't appear as smooth as Shimano's equivalent. But that's it. Simply good.
But there's a rub in it. If the limited spread of the gearing ratio is not enough for you any extension to 2×10 or 2×11 is a costly exercise. Besides all existing components you will also have to replace the freewheel (and depending on availability maybe even the entire rear hub) as standard cassette sprockets will not fit here. 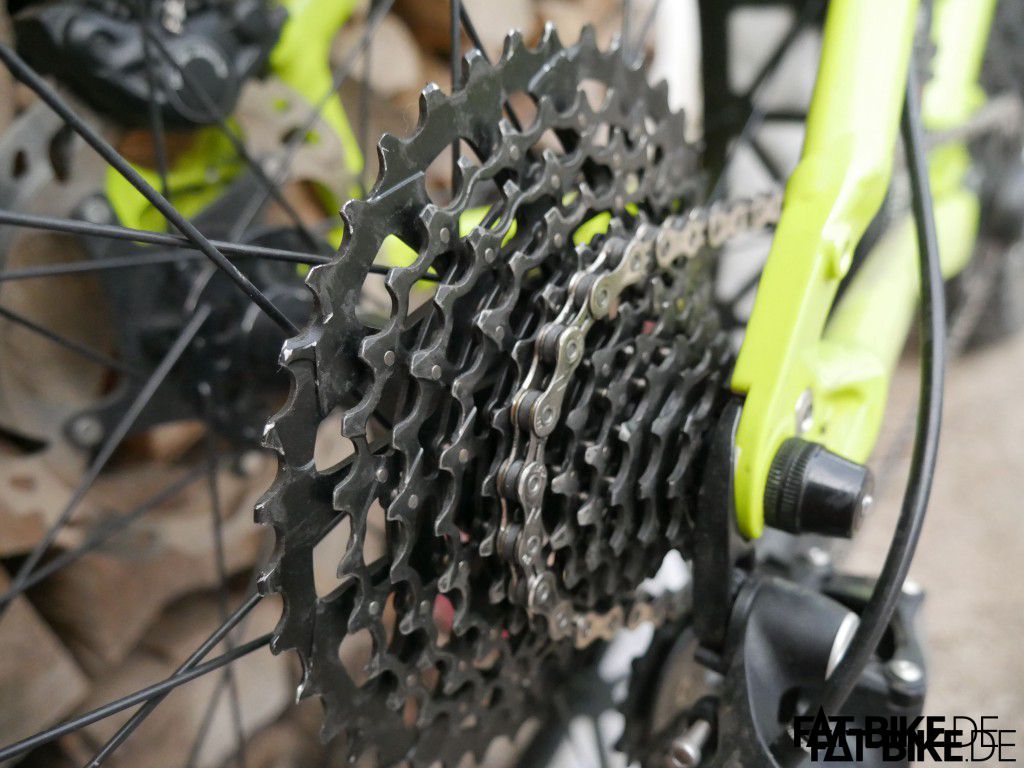 The good news: the highlight – the Race Face Next SL cranks – can be re-used. Due to the Chinch spider system you can simply retrofit a 2-by spider and enjoy your first class carbon cranks. By the way: the replacement of E13 cranks by Race Face equipment will help wide parts of the FatBoy fleet to become more durable. 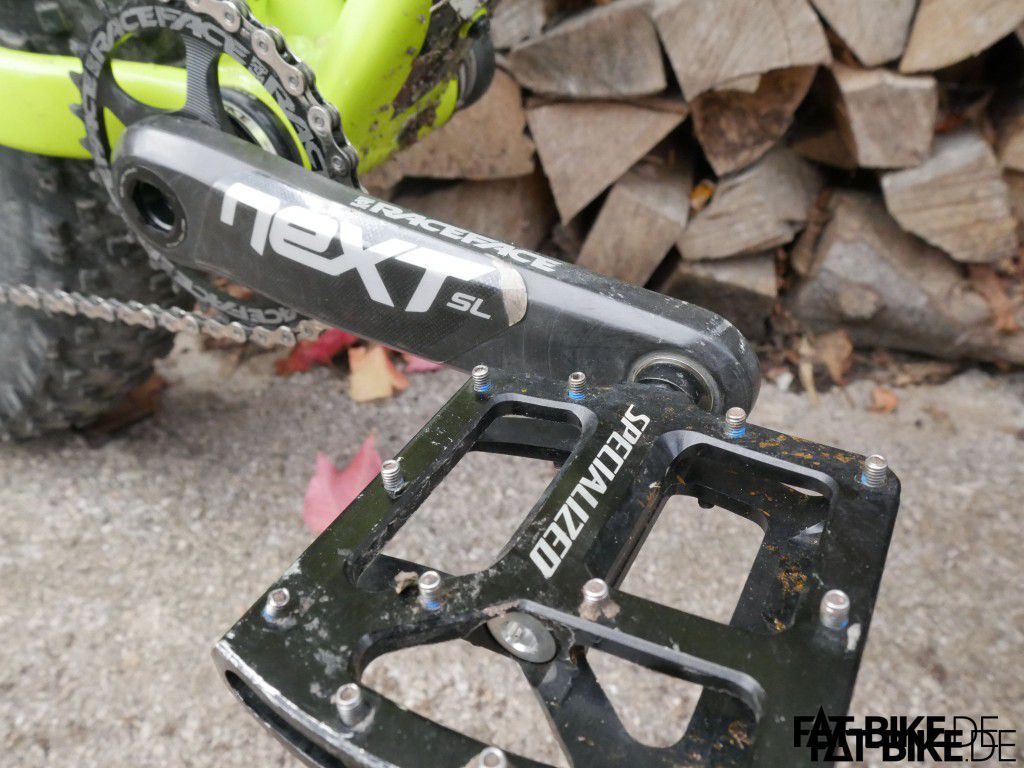 Ah, and the FatBoy Pro comes with a pair of „Bennies“ flat pedals. They're just awesome and claw into your bike shoes like an alien!

A few words about the Specialized Command dropper post. Its release lever is place on the very top outside the post. But despites it's fairly often covered with buckets of mud it works flawlessly. So the captain's chain can be adjusted in three steps: high, medium and low. A stageless adjustment is nice. But in this case the well-chosen stages make an infinite variability needless.
The drop of bitterness: the Command post has a very weak rebound damping. In case you unlock the lowered post without applying some backpressure it literally jumps out and hits the „high“ level with a smashing loud „bang“. You can slightly moderate this behavior by reducing its air pressure. However this in turn may result in a slow movement in case the post gets stuck due to higher friction caused by dried mud or debris. We got used to stop it with our butts. But here we see some room for improvement.
Very positive is the torsional stiffness. That makes the post appear what it is: a massive and solid piece of engineering! 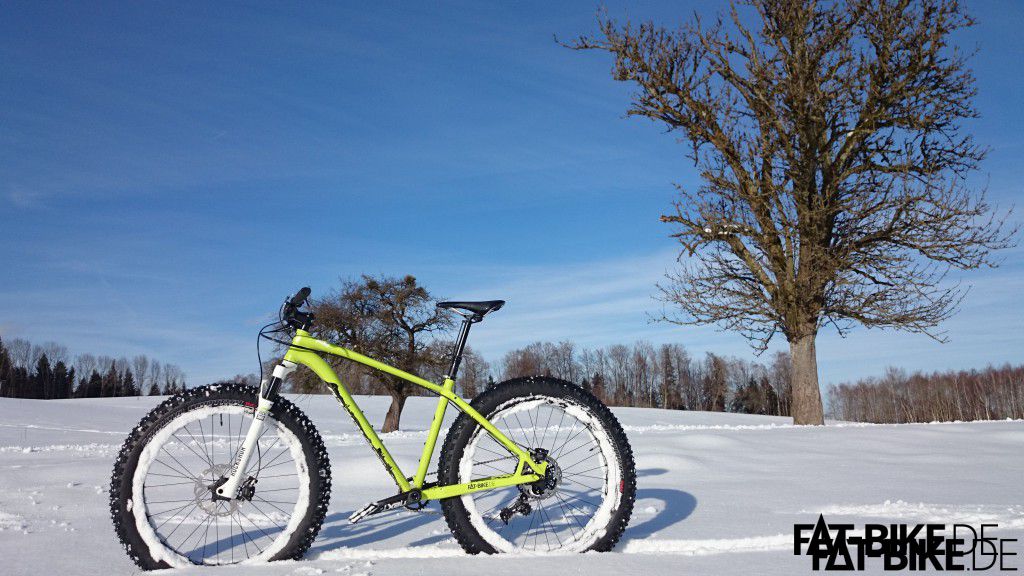 No matter if your mission leads you to Pluto, Mars or the beer garden ‚round the corner: the FatBoy Pro is a reliable and playful partner. That's why Specialized for 2016 – apart from the price – only changes name and color. When early FatBoys came with a few weaknesses these have been duly eliminated for the 2015 Specialized FatBoy Pro. Every bit and piece is optimized to last.
With a few alterations you can adjust the focus of the bike, e.g. adjusting the Bluto to 100mm travel and swapping the front disc to 203mm version give you a fast and nimble freerider.

For us, however, the FatBoy also in its second season is, what it used to be on the very first day we saw it: FAT, boy!