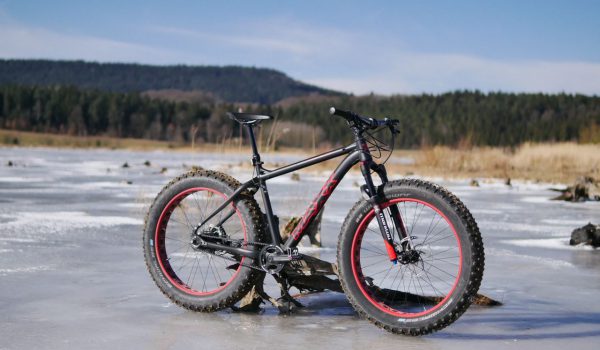 Seriously, we somehow neglected the Maxx Jagamoasta over the past 5 years. Which is pretty unfair as it is one of the Bavarian export stars that you can find in the most remote corners of this planet: wheat beer, Bavarian sausages and Hofbräuhouses. 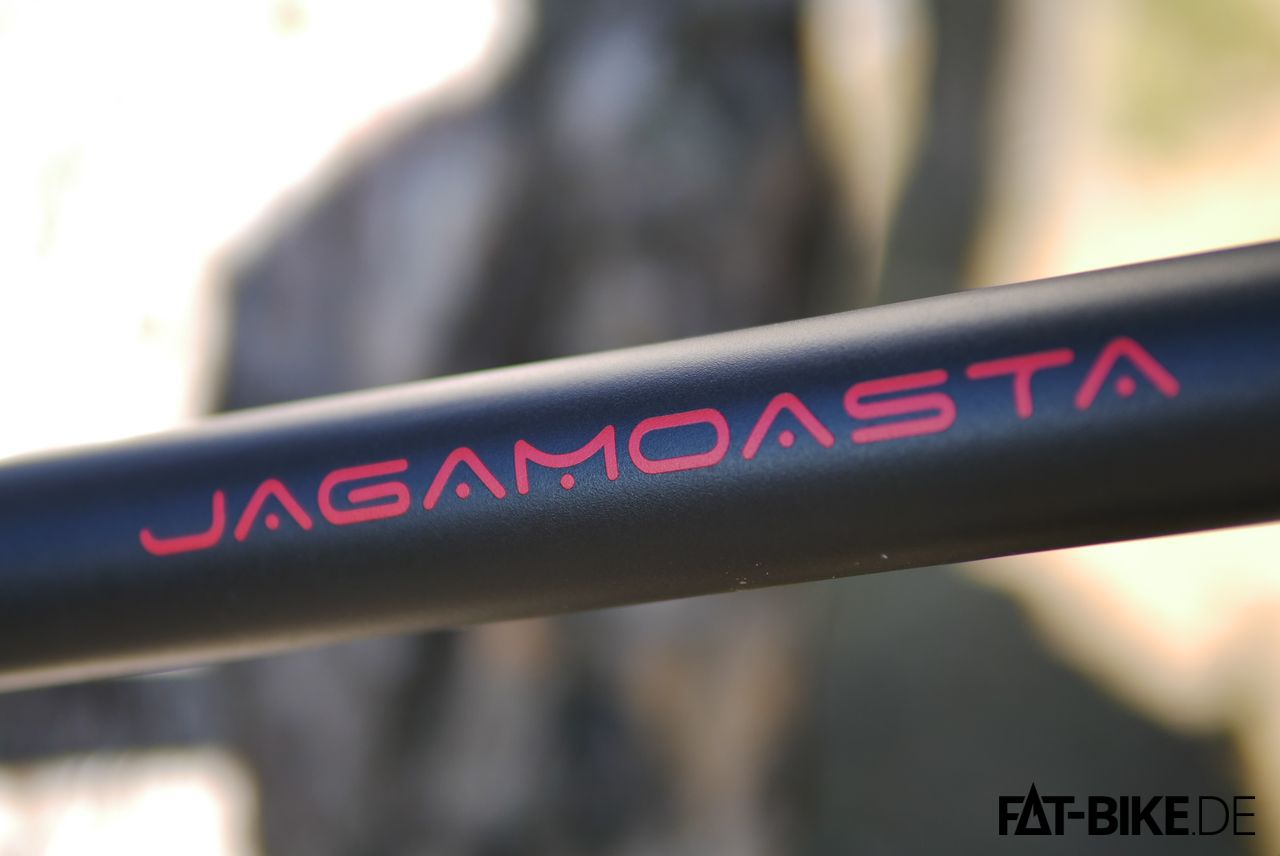 Speaking of most remote corners… The Maxx Jagamoasta has the reputation of being a FATBike archetype. Ignoring other FATBikes‘ „lighter & faster“ approach the Jagamoasta has remained as relaxed as FATBikes used to be from the beginning. Consequently our test bike is equipped with a bullet proof and nearly nonexpendable Rohloff Speedhub XL plus Gates Belt Drive fighting back snow and dirt at any time. So, let's get the party started!

The framework of our Maxx Jagamoasta Rohloff 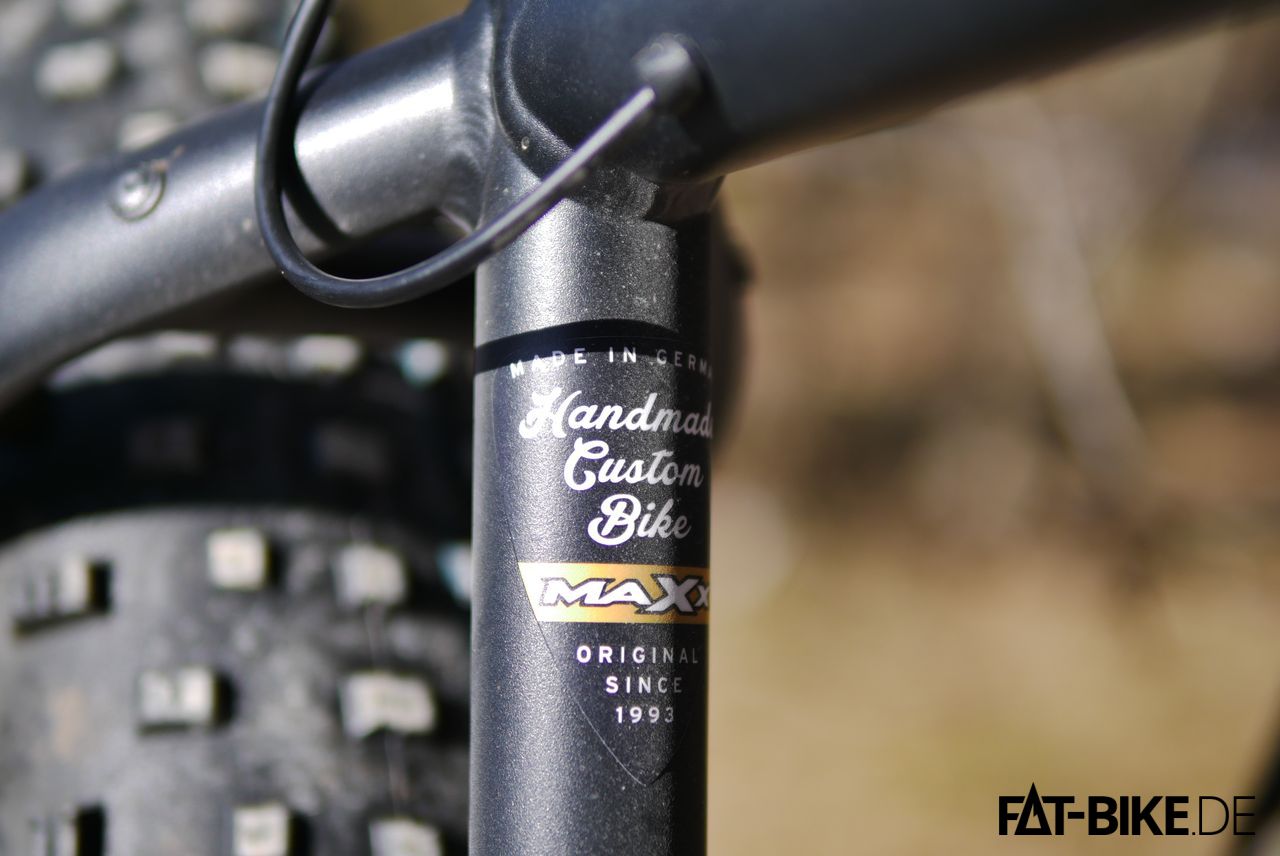 The first contact with the  Jagamoasta reveals a massive aluminum frame that pleases the eye. Following Maxx‘ proprietary specifications it's bred from triple butted tubes drawn from 6005 T6 alloy. Consequently following the  German tradition of hand crafting Maxx does the entire surface treatment including powder coating to order at the Bavarian headquarter in Rosenheim.
Here – in the land of high mountains and large lakes, where the sky is blue and the meadows are green – even giants can get a bike. Those of us who have to duck their head on an average road tunnel may order their bike up to XXL size (60cm / 24″). We are not aware of any other „mass“ producer to deliver such rolling stances. 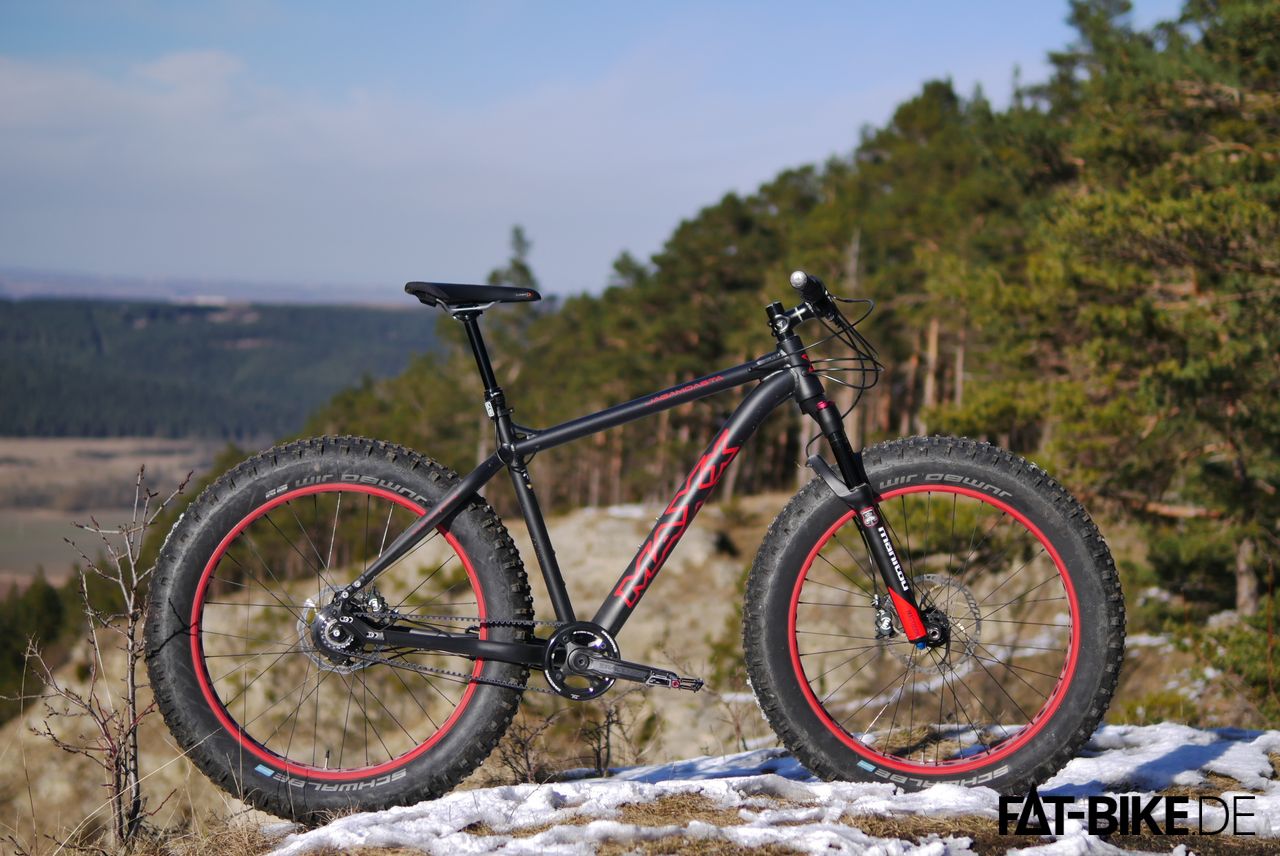 Rather compact than lengthy: the frame

According to the geometry data the bike should be pretty well balanced. 69.5° steering and 73° seating angle are a great basis for touring bikes with a slight catch on single tracks. The chainstay is – in theory – variable but on a gates drive the adjustment is used to properly tighten the belt. Using a chain drive it can be adjusted from 465-480mm which covers anything from „halfway short“ to „halfway long“. The top tube comes in a tad bit short for a size „large“ frame – it only measures 620mm. Combined with the 100mm stem you get a thoroughly convenient reach yet the bike sports a rather classic „short frame long stem“ setup. We call that archetype. 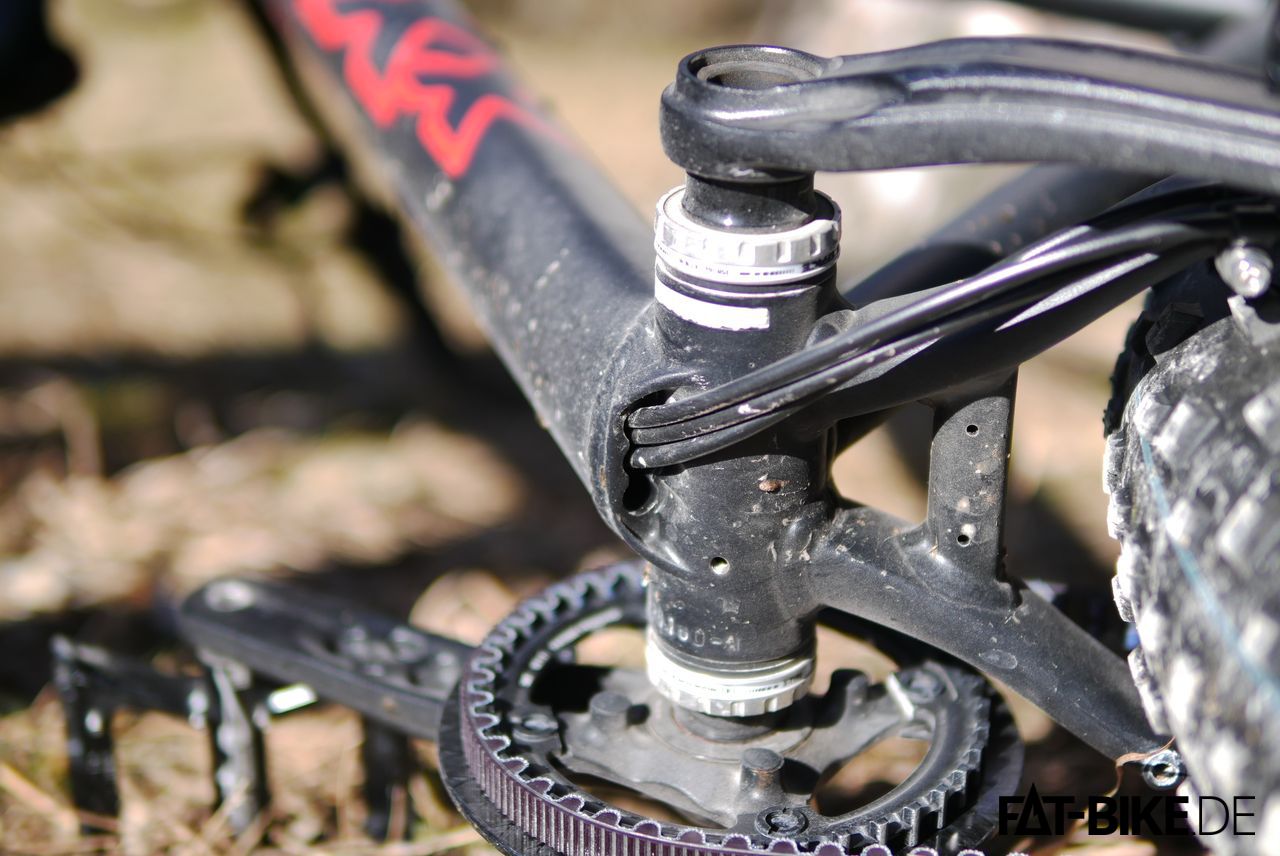 What a nice way to release cables and hoses into freedom!

However as you can expect from a modern bike you can plug in any kind of rigid or suspension fork with a tapered steerer. Lovely details such as the outlet for inline cables & hoses or the massive seat dome gusset complete your custom bike basis. 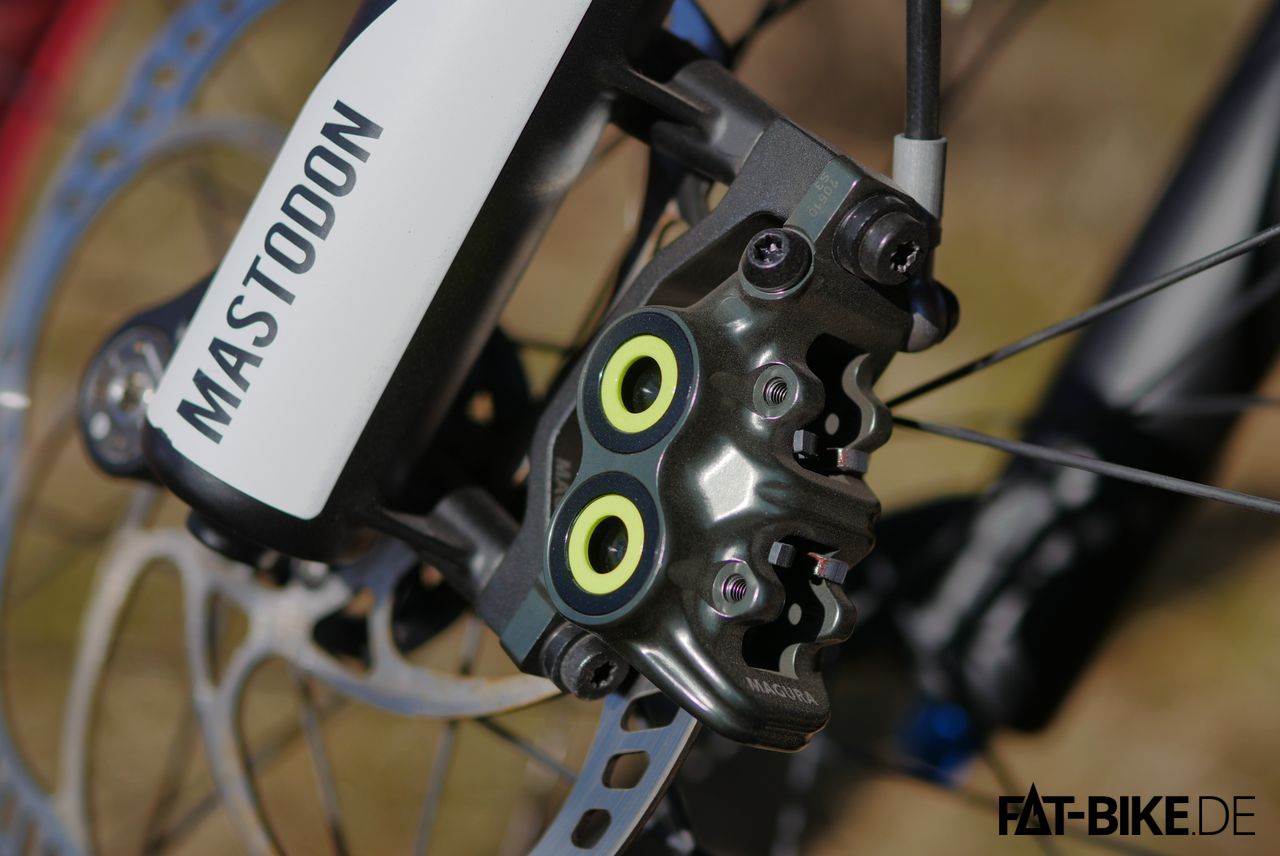 Anchor: the Magura MT7 belong to be best brakes on the market.

You don't simply buy your Maxx FATBike. You create it like a fine dish using the Maxx Configurator. That said it makes only limited sense to deeply elaborate on the parts our bike comes with. It's simply an example of how things could be: flat out! So there are super massive Magura MT7 Brakes brakes, tubeless wheels based on Sun Ringle Mulefüt rims, a dropper post and a variety of Race Face parts. Spiced with a Manitou Mastodon (100mm travel) this bike hits your tastebuds like a tender Filet Mignon. Rohloff hub and Gates belt jointly ensure that incoming power will not lead to hick-ups. 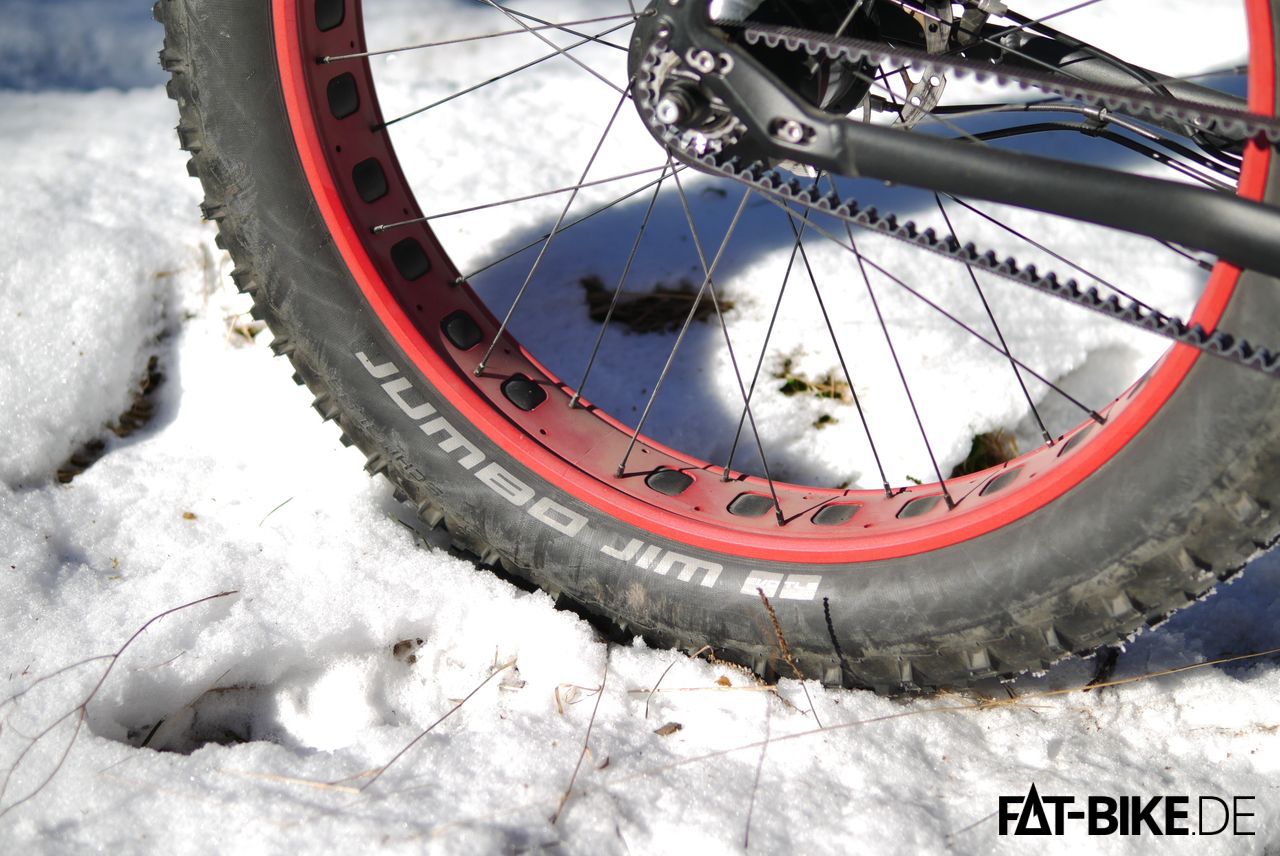 So what you get is haute cuisine rustique, just like a pork shank cooked by a star chef. If there wasn't Schwalbe's Jumbo Jim which, sticking with food analogies, is more an iced cucumber soup at prawn mousse. It does not match to the rest of this energetic Bavarian. To complete the spicy delight we suggest to plug a pair of Vee Tire Snow Avalanche, Surly Bud/Lou, Maxxis Minion or Vittoria Cannoli onto your rims. You can add some of the aforementioned right at your configuration with Maxx. This gives you a perfectly well balanced snow and dirt bike to cope with the worst conditions on this planet.

Hillclimb with hat and backpack 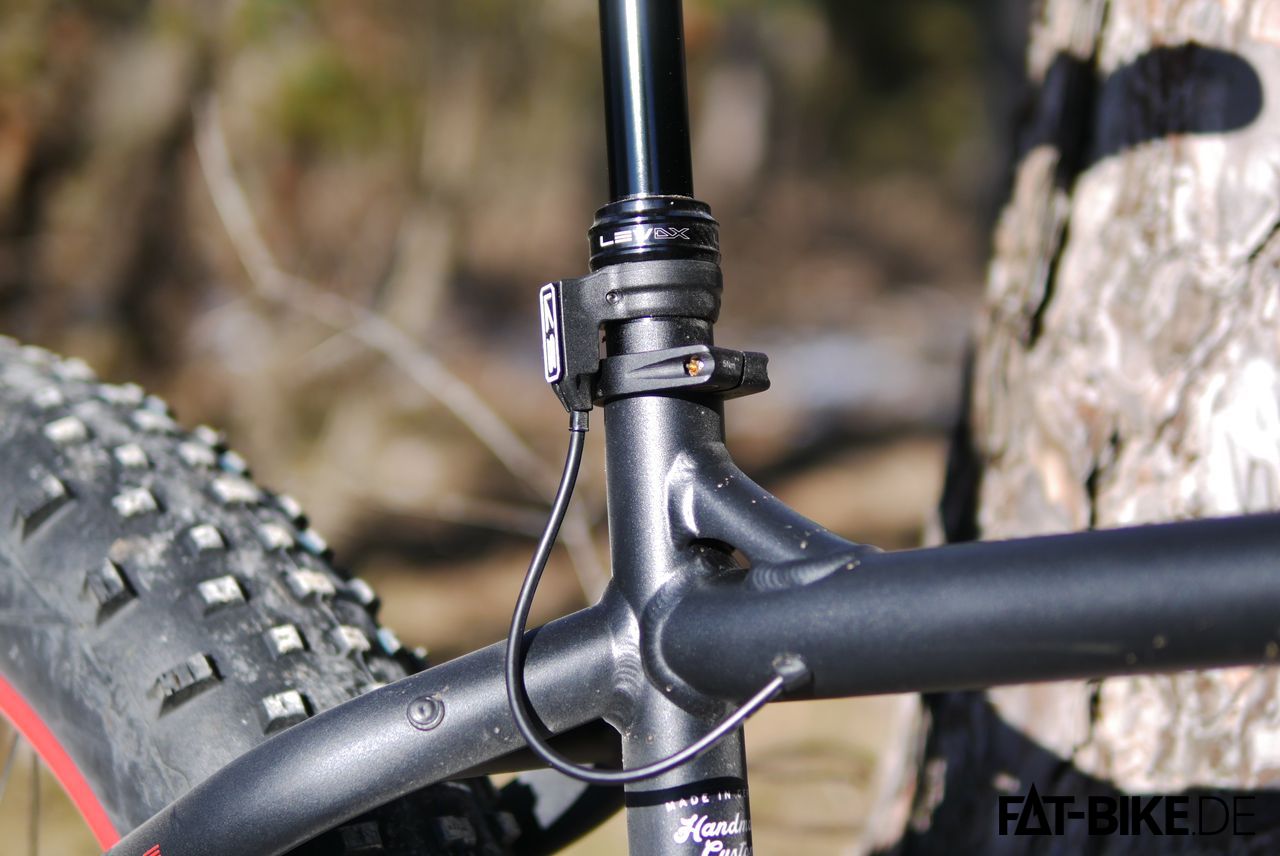 Plenty of „nice“, however plenty of „heavy“, too…

Even though Maxx has installed no tubes to save on weight and gain on handling & comfort the Maxx Jagamoasta Rohloff adds a whopping 16kg to the scale. Rohloff hub, Mastodon, dropper post – you wanna play, you gotta pay. Moreover the frame may not be the lightest on earth but it's approved for 120kg rider's weight. No ifs and buts! Taking that into account the super massive build's seems acceptable. Plus there is a lot of savings potential that you may lift in your own build. 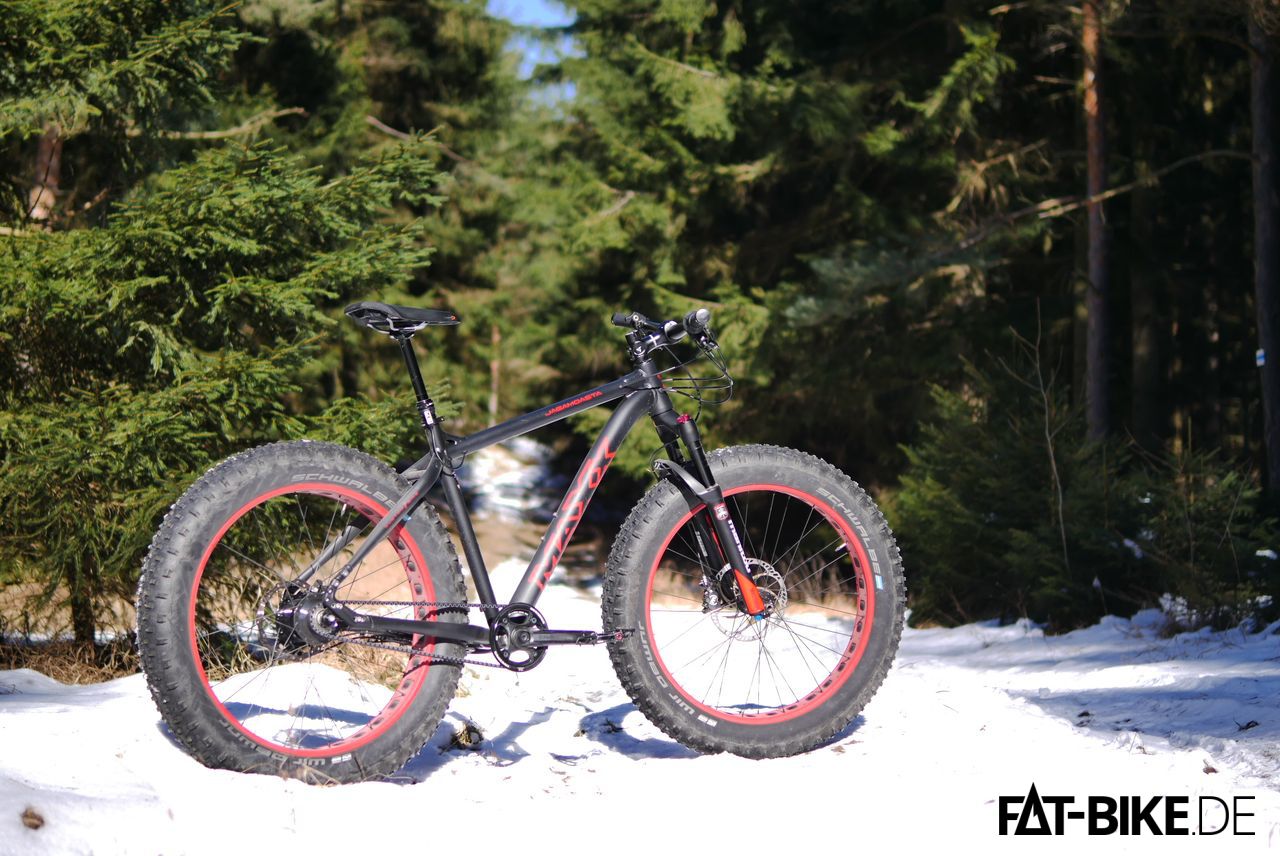 Eats snow and dirt as every good FATBike should do!

Bavarians got a reputation of being rather snugly folks and we definitely can confirm this as far as the Maxx Jagamoasta Rohloff is concerned. It's not one of those geeky sprinters. It's one of those guys who walk up a massive mountain with hat, backpack and a wooden walking stick. The drivetrain pampers the rider with its silky smooth operation and even in knee-deep mud there is no rattling or squeaky chain. Shifting the Rohloff Speedhub XL may be a bit unusual for novices. However with some exercise it works nice and smoothly. It covers a huge gear range which is as adequate for a beer garden ride as as for a super massive alpine hill climb. Though the Mastodon comes as entry level version it processes all incoming impacts with no excitement. And in case of excessive speed you may fully rely on the Magura brakes to save your day. Ripping those tiny levers feels like hitting a mountain goat flat out! 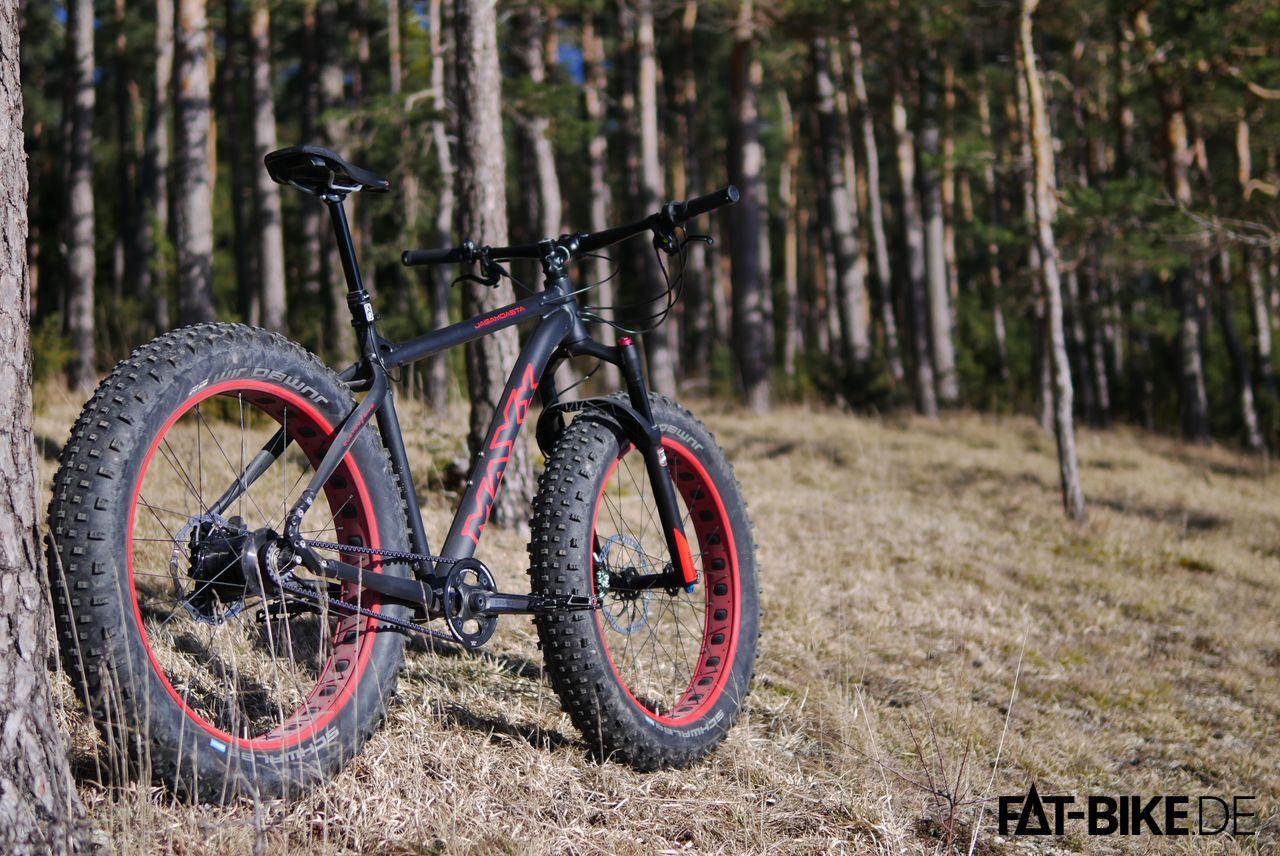 …it is, the Maxx Jagamoasta, pure and unspoiled. The upright seating position ensures that even long tours can be done with no big pain in the – yeah, you know where… Who cares that such a geometry is not highly inviting to race single tracks at full throttle. You wouldn't buy a Maxx Jagamoasta Rohloff for that kind of riding. This bike was made to cope with demanding tours. Not only in his Bavarian home country but anywhere in this world. No matter if ice desert, rain forest or Sahara sand – just add some proper bags and tires and say good bye to the civilized world.
And by the way: the Maxx Jagamoasta can claim to be the first bike that ever won the legendary Yukon Arctic Ultra marathon! That tells more than 1000 words!

Or you simply roll to you favourite beer garden, simply because you can – the Bavarian way! 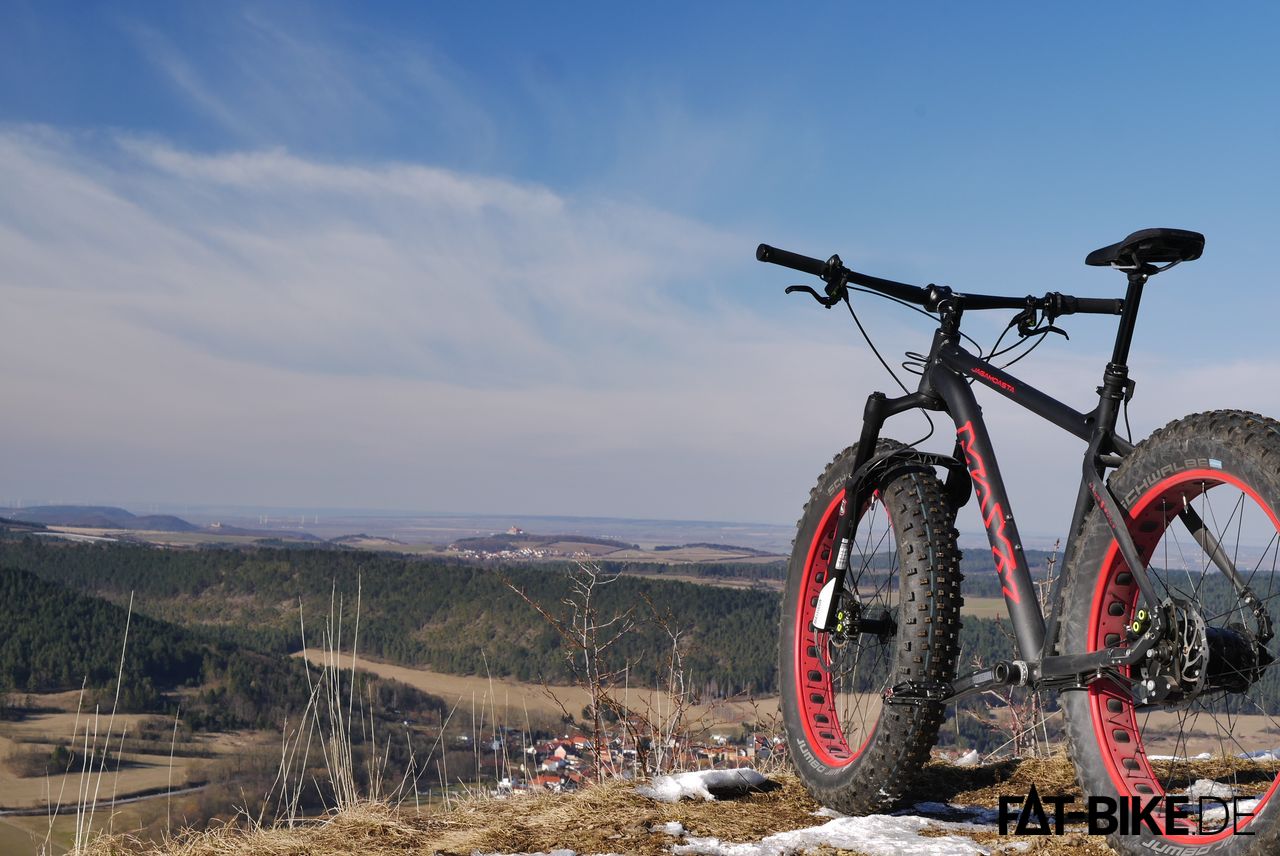 A bike for those who don't have to proof anything to themselves or others – that's how we can summarize. What you get is a high quality custom FATBike with immaculate build quality as it is typical for Maxx. When considering your individual configuration bear in mind your intended use to ensure your FATBike will not get too FAT. The equipment of our testbike, however, didn't leave much room for improvement. Rohloff Speed Hub and Gates Carbon Belt drive are known to be the dream team for the most kinky rides.

Leaving at least 3,299 Euros at the Rosenheim counter allows you to roll your Maxx Jagamoasta Rohloff off the shelves. In case you opt for a chain based drivetrain this price drops to a very fair 1,899 Euros. However according to how many boxes you tick your individual price may raise. But in fact there are many Bavrian products that are well known for the long option lists 😉