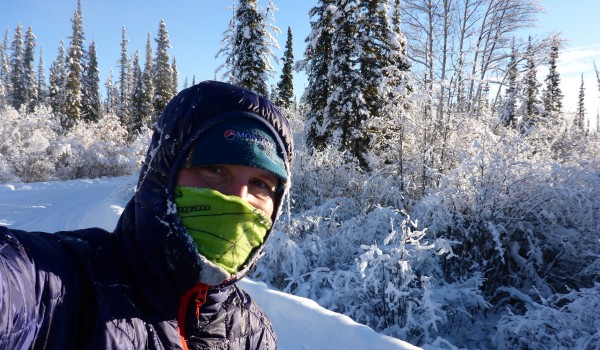 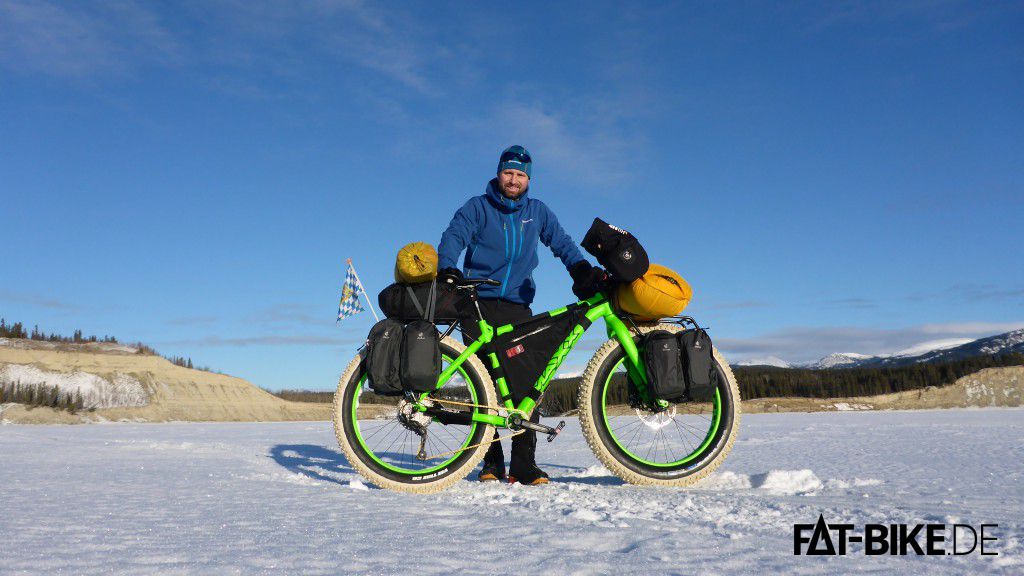 So, the race is over and Flori Reiterberger is the proud winner. That’s the whole story. Well, maybe not the whole story as the complete picture is much bigger and it’s definitely worth to tell you about what has happened.
Right after his return to Germany we met this nice prototype Bavarian guy to have a few beers and speak about total loneliness, how make quick decisions, how to cope with the monotony of an ice desert at night and why the MYAU still was a fantastic experience. And of course we spoke about the performance of his work horse, the Maxx Jagamoasta in “Arctic Setup”. 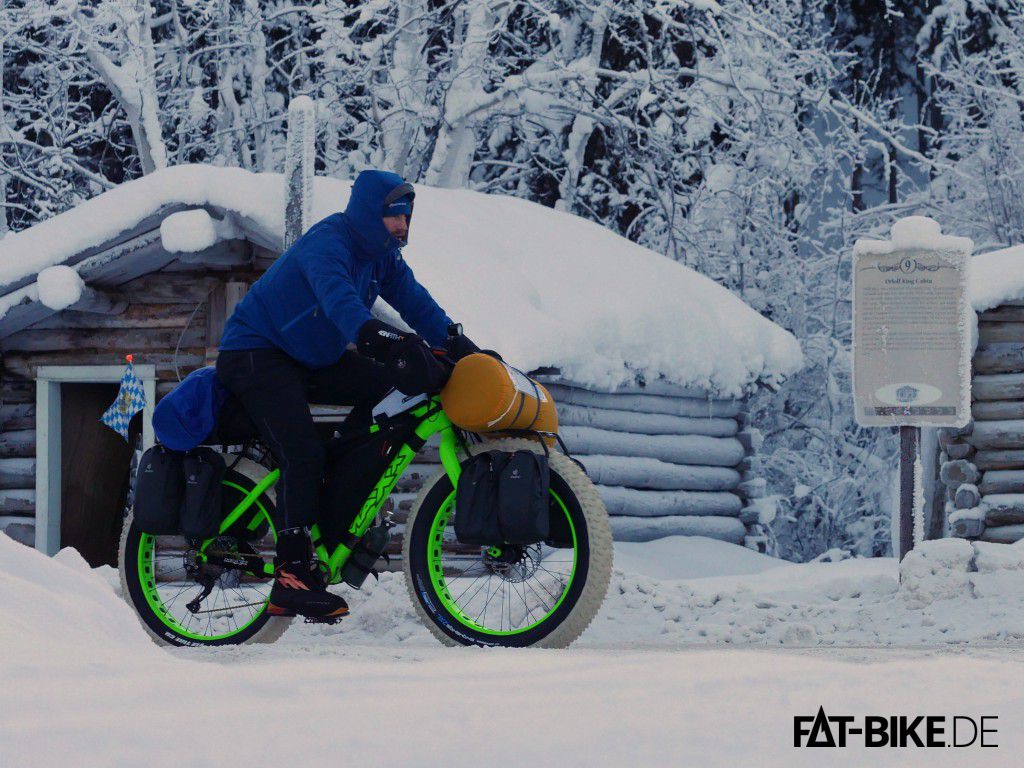 Just looking at it makes us freeze… (Copyright: derekcrowe.photo/MYAU)

First of all we wanted to know how this race works. And it’s fairly simple: there is a start, eight check points and a finish line. It’s as easy as that (click here to get maps). At most check points they serve food or refreshments and there’s a chance to rest and, at some of them, take a hot shower. We’ll tell you in a bit what it’s good for. Moreover at each check point you can swap your “drop bags” – you’re allowed to change your worn stuff to fresh one up to three times.

Apart from that the check points are mainly landmarks – you can have a break but you don’t have to. The latter was Floris approach as his goal was to reach check point #3 in one stage. He didn’t exactly meet this one but passed #2 and did most of the third stage as well before he took his first rest.

You despair of the monotony out there… 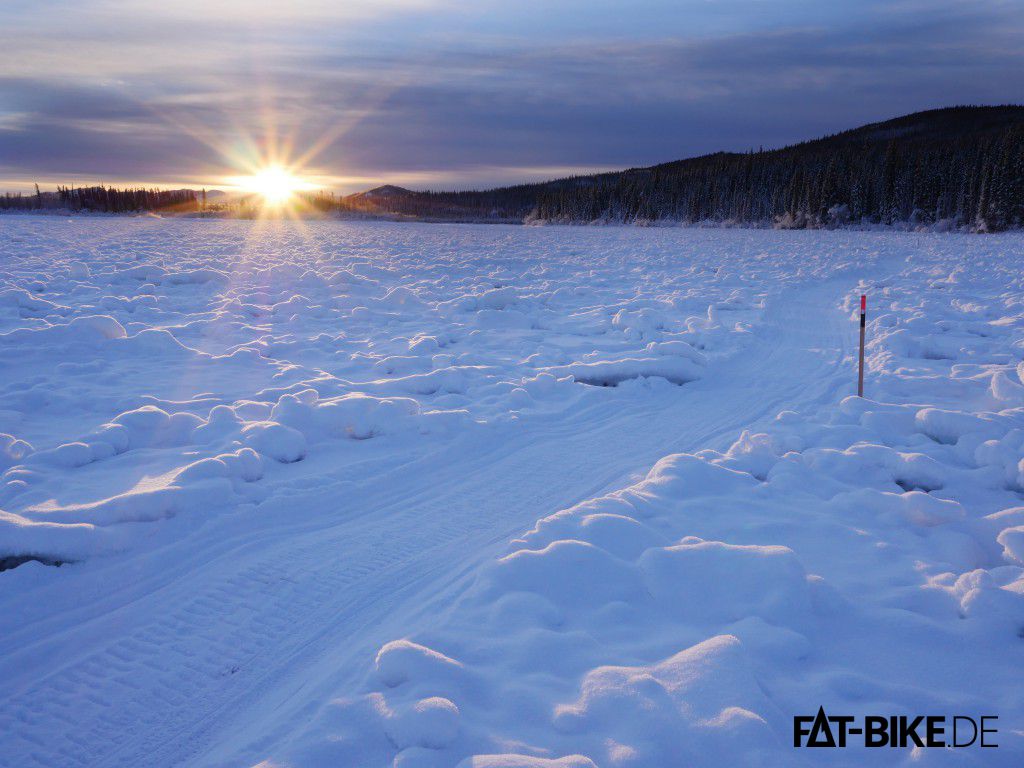 It’s hard to understand what it means to do this race when haven’t done it, yet. Let’s try: it’s riding a distance of 480km/300mls with approx. 12-15 kilometers an hour while complete loneliness, extreme conditions and a totally unaccustomed environment suck your brain and body dry. Or, to say it with Flori’s words: “Wolves and coyotes aren’t your biggest problem out there; they were just curiously looking what I am.” This sounds sort of comforting…
The loneliness is much worse. His first stage brought Flori stunning 17 hours northwards. Most of this time you’re riding through the darkness, your SON hub dynamo generates electricity that is converted into vitally important light by the SON LED lamp. But: that’s it with entertainment, folks! And once you start running out of topics to soliloquize it’s getting pretty boring out there. Flori told that your brain comes to a stage where it literally switches to stand-by and you’re just running on auto pilot. Just after 150km Flori fell asleep. On his bike. And eventually after a bush suddenly stopped him he erected his tent and swapped his sleeping place form bike to bag.
Now, do you know this one? You just went to bed and suddenly the doorbell rings. Who the hell needs this?!? But it works even in the middle of nowhere. In Flori’s case it was the official MYAU photographer Derek Crowe who popped by and took this epic picture: 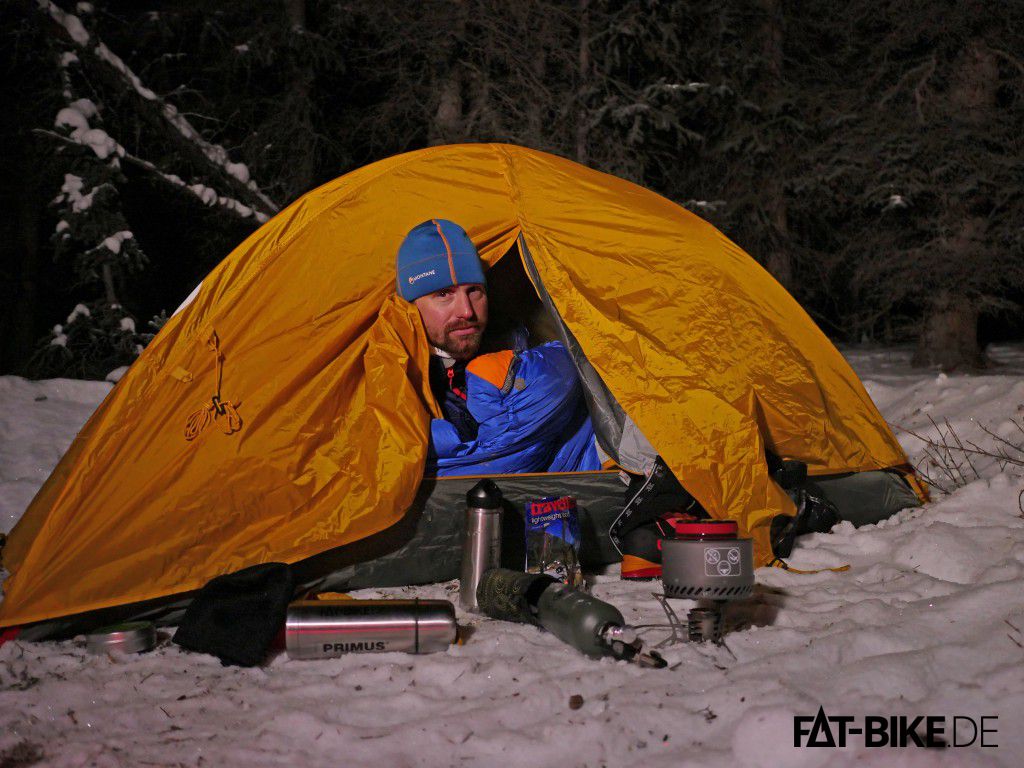 Who the hell?!? (Copyright: derekcrowe.photo/MYAU)

Riding through the deserted countryside in general is nothing for the faint-hearted. His second stage lead Flori across endless lakes. The only entertainment to enjoy out there at night is a few furry little arctic hares that speed over the snow. That’s it – there is no tree or bush or anything else that crosses the pale cone of light in front of you. And so all reference systems gradually dissolve. You don’t know where you are, when you are or who you are. And you’re getting more and more desperate. After 18km straight riding it all boils down to this one thought: when the heck will I arrive?!? And it’s like a punch in your face when there is just another frozen lake waiting for you after the next turn… 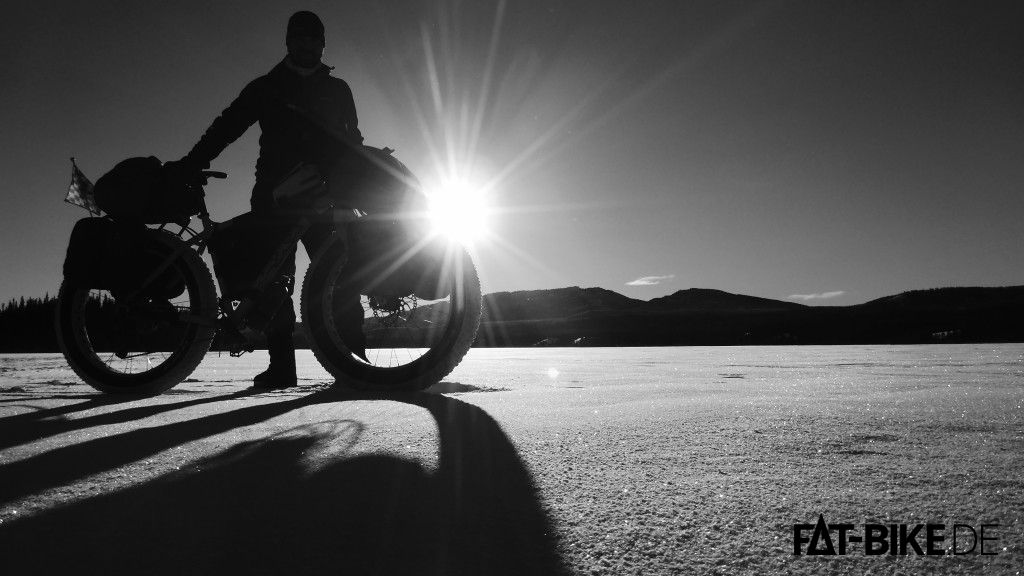 You have to take a decision – quickly!

Okay, that’s what we understood so far: it is not a cakewalk. But by the way: by far the most MYAU starters are runners. And usually they are faster than bikers! But as there is no individual trails for runners and bikers Flori also had to compete with the strong runners… 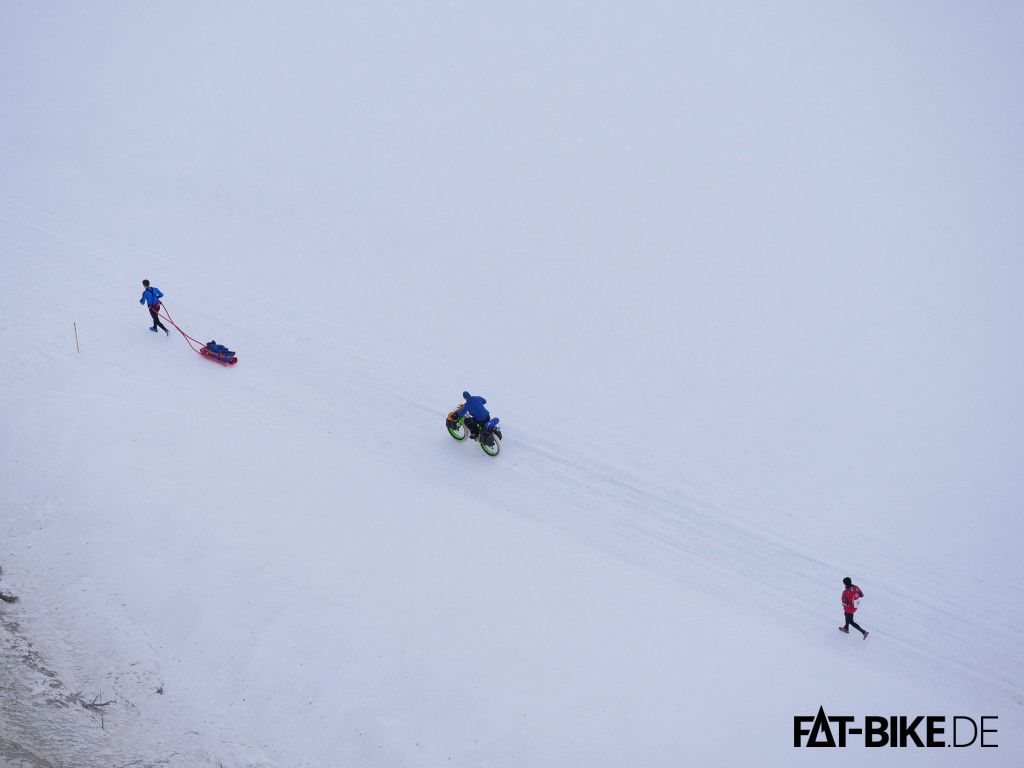 You can run but you can't hide… (Copyright: derekcrowe.photo/MYAU)

And then there are those moments where a participant has to take a decision that, this may sound a bit theatric, may decide about life and death. Flori had it when his front wheel dived into a feared “blow out” (a water blister under a thin layer of ice). Thankfully he didn’t flip over as in the case the rider crashes though the ice and immediately is in serious and potentially mortal trouble. However, while trying to pull his Vee Tire Snow Shoe 2XL out of the ice hole both feet broke though the thin ice as well which resulted in build-up of a 10cm ice crust on his shoes. What would you do? Drive back to the last check point? At least you know the track. Or rather start a fire and try to dry your shoes? Or why not ride on? Remember: you have no idea what lays in front of you… Any decision may have drastic results so you need to carefully judge and decide. 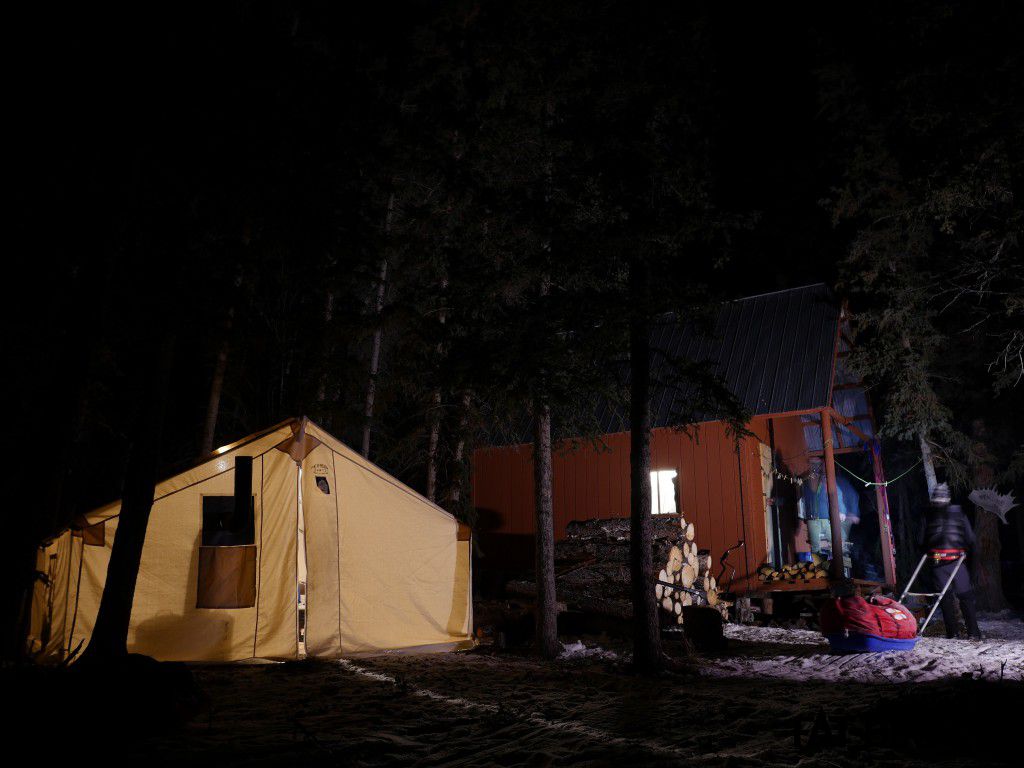 But there is one thing you unfortunately don’t have out there: time to think it over. At -30°C you’re prone to cool down extremely fast – which may kill you in a very short time. You have to run. And you have to decide. So it must be a quick one! Not that easy as there is this one creepy certainty that comes into mind: you’re alone, your emergency pager will call help that arrives after dusk, whatever happens you are on our own out here. You can’t, as Flori told us, prepare yourself for this mental stress. 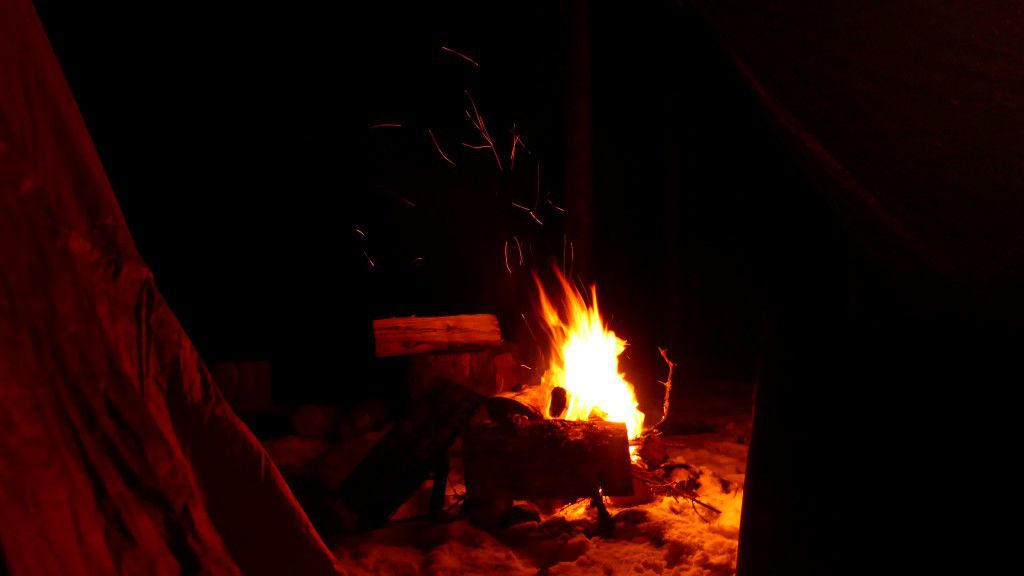 Flori opted to head on and tried to warm up his feet during walking passages. Apart from some minor frostbite (Flori: “I could fix them!”) no major issues came up. At the next check point Flori took the hot shower we mentioned above and also took a rest of several hours to dry his shoes at a bonfire. Well, he could have slept inside as well but a true Montane Yukon Arctic Ultra rider prefers a recreative rest under the stars.

The cold is unpredictable 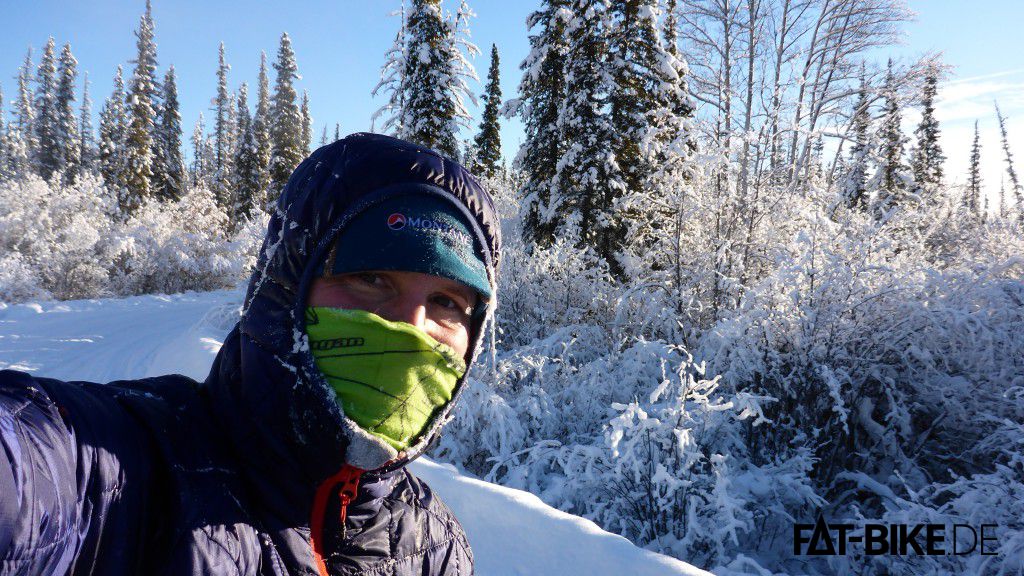 Cold out there? (source: Flori)

Time by the way also plays an important role in a different game. Icy winds can cause severe temperature drops within only a few meters of riding. As Flori told us: “So, you’re riding along at about -15, -18°C. Not really cold. But then you drive around a corner and suddenly temperature drops to -39°C! Now you have to batten down the hatches in seconds!”. Only Flori’s Buff scarf could prevent serious damage as Flori quickly pulled it over his mouth.
Other than is competitor Tim who couldn’t get hold of his face protection quickly enough and whose bronchia froze within only a few breaths. He’s well again but during the race he needed medical treatment including antibiotics to avoid further damage.
So, it’s not an exaggeration: out there it’s truly a question of life and death.

How good is that! 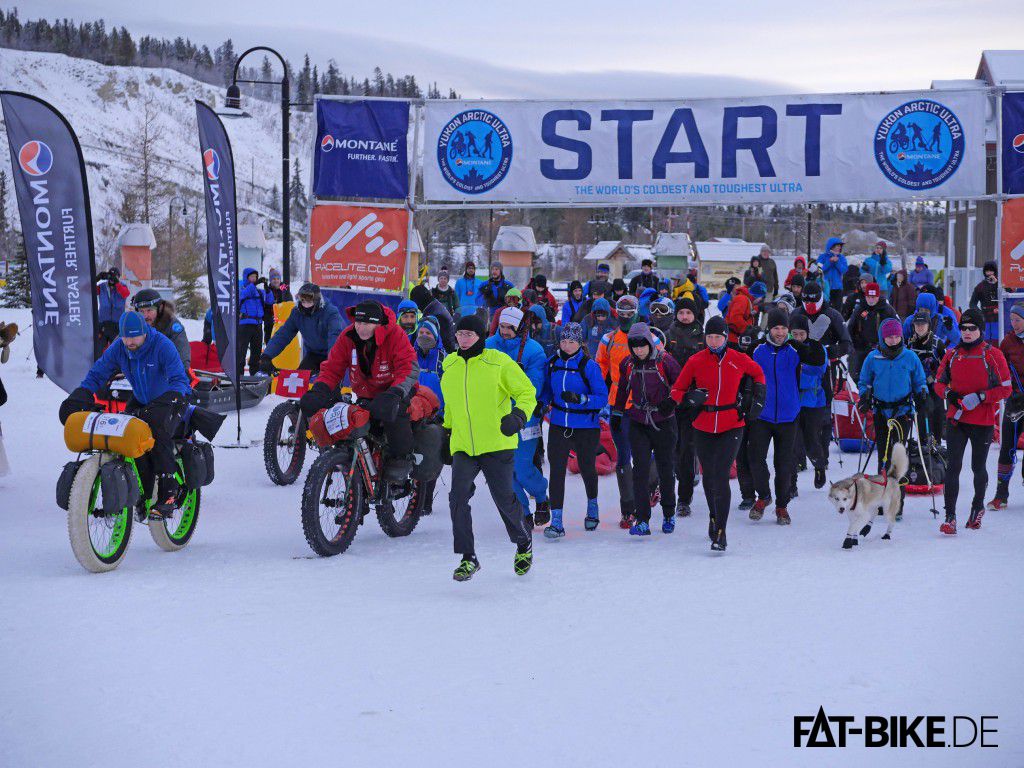 They are competitors, yet they are a team! (Copyright: derekcrowe.photo/MYAU)

But before we will make a quick break (you will find all about the bike, equipment and Floris heroic finish in the second part that will be published in a few days) let’s push danger, cold and stress aside and speak about the great things of the Montane Yukon Arctic Ultra! Just to avoid you get a wrong impression… When Flori told his story there was this gleam in his eyes and a big fat smile on his face. Both are indicating a certain amount of pleasure! We spoke about nature, sky high mountains covered in snow, sunshine over the endless Yukon ice desert, about wolves, elks, bison and of course arctic hares. 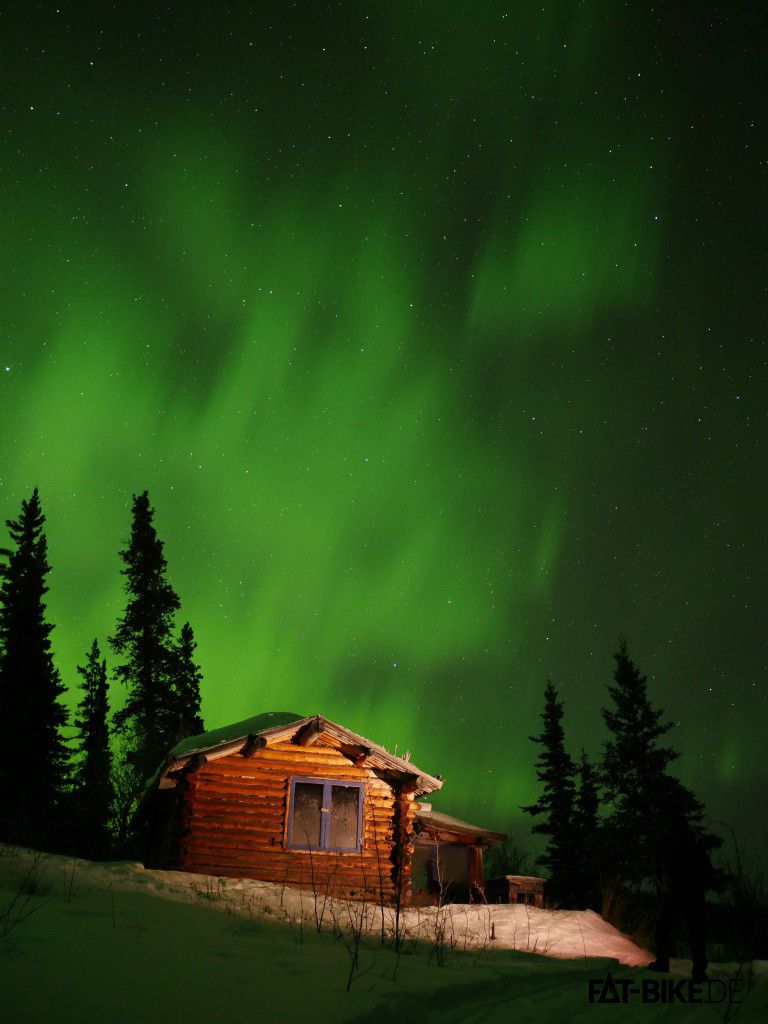 So, during the Montane Yukon Arctic Ultra you will focus on the little things. Sportsmanship and fairness for instance. The MYAU is not a playground for egomaniacs and though it’s a race you always find time to wait and care for each other. This generates a deep feeling of community out there in the middle of nowhere.

And even the really little things grow to become true highlights. After one hard day out there in the snow you appreciate a big cup of fresh coffee served at a check point more than you did ever before. And one of Flori’s biggest experiences was the hospitality of the Yukon people. Where ever the race may take you, you will find appreciation and great support. And so we found one of Flori’s greatest experiences between the lines: a huge bowl of bison goulash served to him after he’s survived through expedition food for three days.
Conclusion: it takes little to be happy!

By the way: you may get the impression that Flori is a nature-maniac. Well, you’re right. First thing he did after his arrival to Germany was a ski tour up his home mountain. 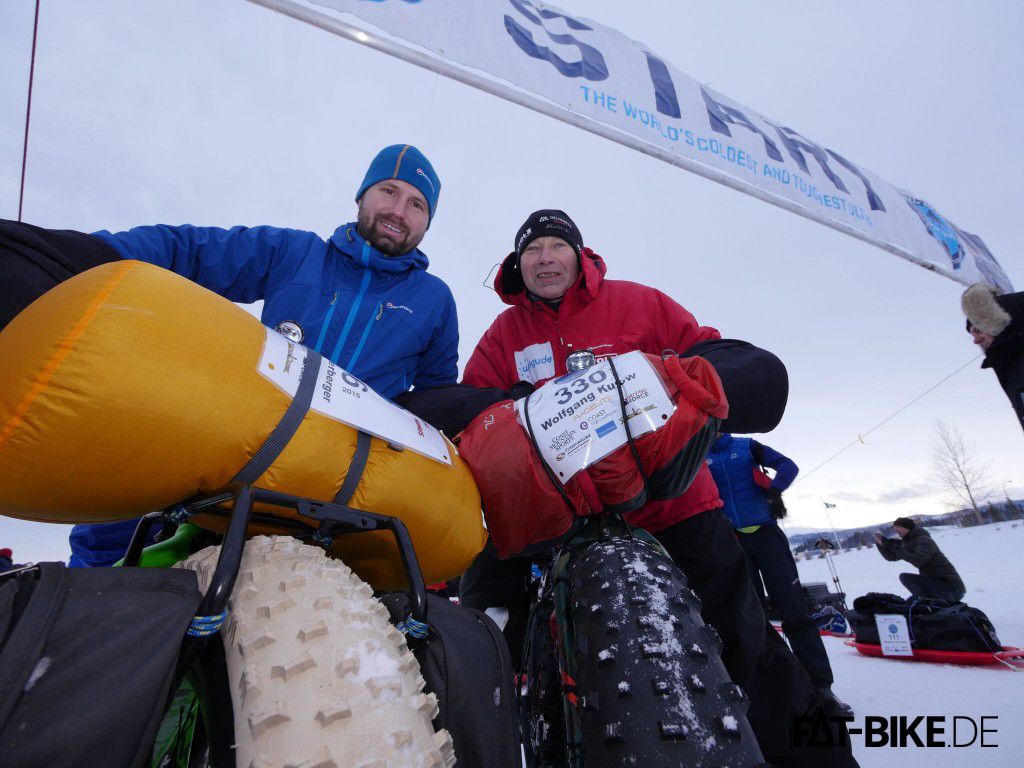 That’s it folks. For now! We learned a lot about one of the most extreme events we ever heard about. And we made the acquaintance of a very sympathetic and down-to-earth guy who just won the Montane Yukon Arctic Ultra on a FATBike. A guy who truly impresses us not only by his performance but only his attitude.
Next time we’re gonna tell you everything about the bike, his equipment and Flori’s recommendations to all who just said to themselves “Awesome, I gotta go and do this shit!”. And we will tell you the story of Flori’s fulminant finish as winner of the Montane Yukon Arctic Ultra on a FATBike.
So, stay tuned, it’s gonna be a thrilling second part!