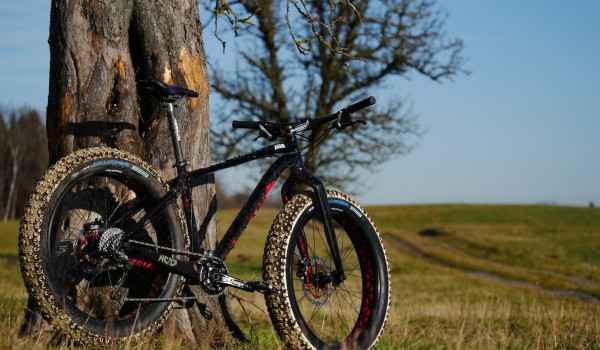 Some great news upfront! Alex has agreed to extend his previous promotion on Vee Tires in favor of FAT-Bike.de readers. So all of you who want to verify our testing results or just intend to own their own set of (any) Vee Tires just follow this link, select your tires, use the code FAT-BIKE.DE when checking out and Alex‘ system will automatically deduct 15% from any Vee Tire you purchase. (Note: the promotion ONLY works by using the link above!

Now, let's go down to business. After we've recently had so many travel and race posts we found it's time to go back to what is our „prime passion“: testing FATBike stuff! And here we go. This time a set of Vee Tire Bulldozer tires got into our scope. In the past having a look into our testing diary rarely uncovered generous praise for Vee Tire stuff. It reads like this: „high rolling resistance“, „poor cornering performance“, „lack of riding comfort“… 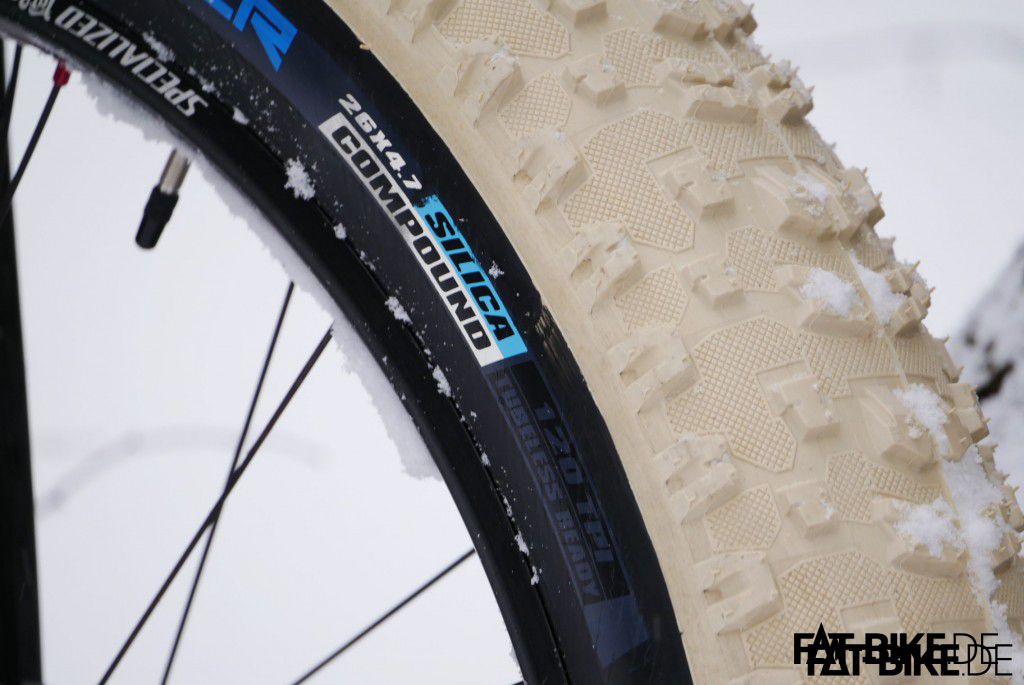 But as we tested the Rocky Mountain Blizzard back in 2015 we quickly realized: there must have been some tremendous changes „under the bonnet“ of the Bulldozers that were installed. So we equipped one of our FatBoy Experts (we formerly used them for tire testing so we could ensure comparable results) with a pair of Vee Tire Bulldozer Pure Silica 4.7 (a.k.a. PSC) and let it roll. To make the long story short: time to revise some older findings!

In case you wish to buy a pair of these tires for your convenience we've added some links to our partner Alex*, as usual they are highlightes with „*“.

Today we won't speak about technology… 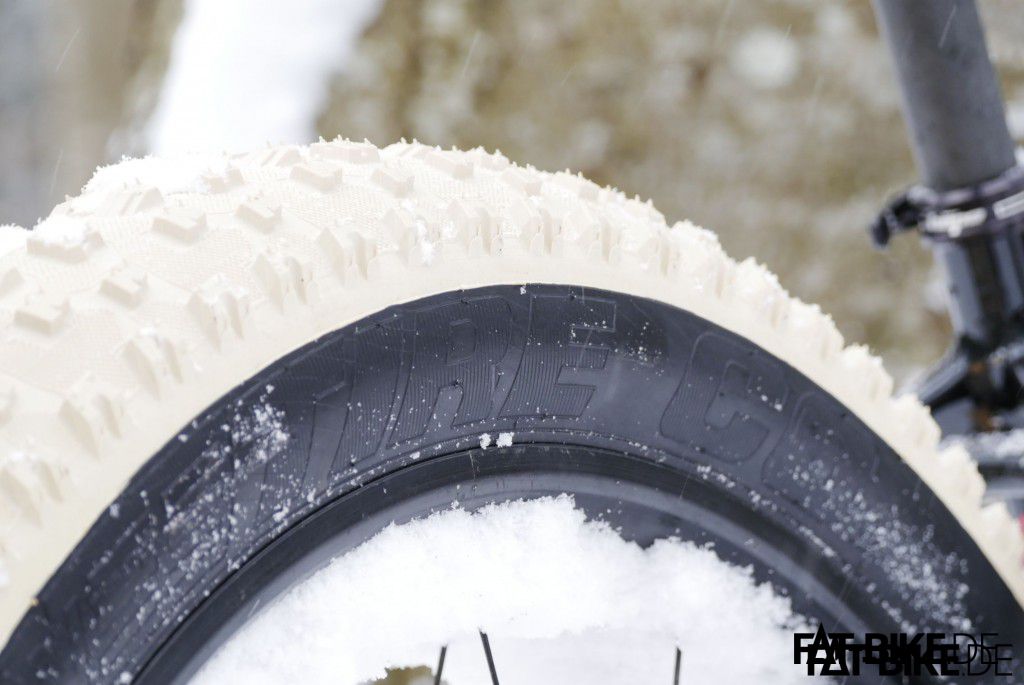 We'll dig into Vee Tiro Co. soon and also we will speak about their technology and developments then. So for today all you need to know is this: the Vee Tire Bulldozer Pure Silica 4.7 features a lightweight 120tpi casing and is tubeless ready (however we used an old fashioned tube for the sake of easier – means lazy – test handling). Our official FAT-Bike.de kitchen scale stopped at 1.465 gram which is pretty okay for a 4.7 inch tire.
The nicely looking white „Pure Silica Compound“ in general is a bit softer than its pitch black counterpart. Moreover it stays as soft also during extremely cold conditions making it the perfect choice for daredevil occasions such as the Yukon Arctic Ultra.

How does it ride then, let's say on snow? 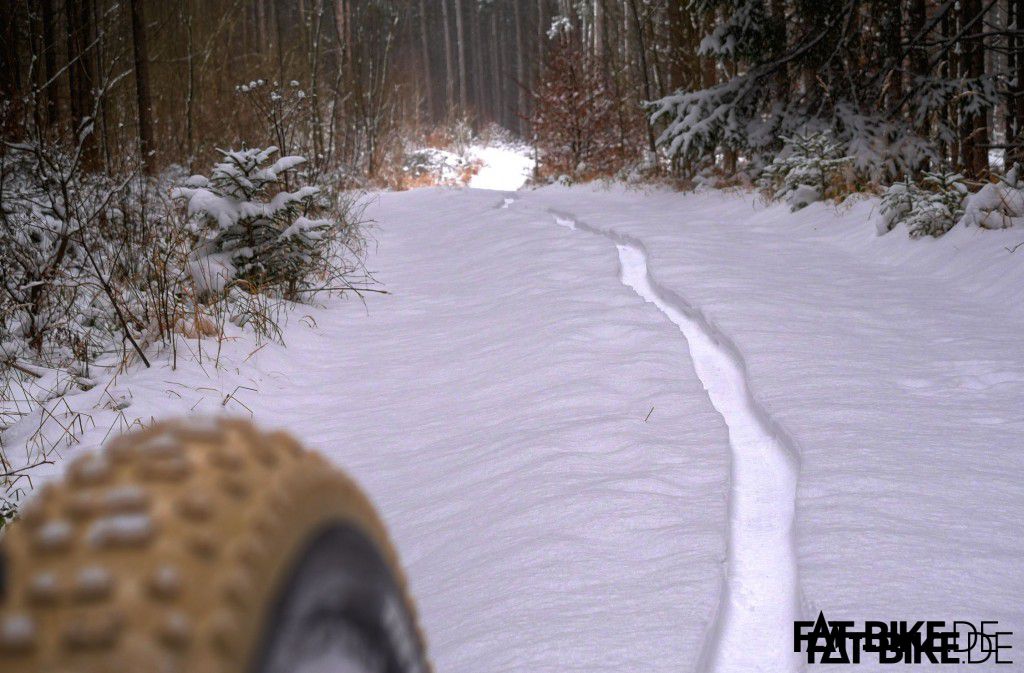 So here we will focus exclusively on handling and performance. Here in Germany we're not really having what one would call „winter“ though it's early feb… So we were grateful to have at least a few days of snow in early January giving us a chance to test ride the Bulldozer on virgin snow fields. And undoubtedly the Bulldozer is a great choice here. The super soft PSC rubber enters into a sprocket-like relationship with the snow covered planet and gives you an impressive traction under all circumstance. You can even ride on icy surfaces with better performance than normal FATBike tires – however you still may wish to opt for a studded tire here. 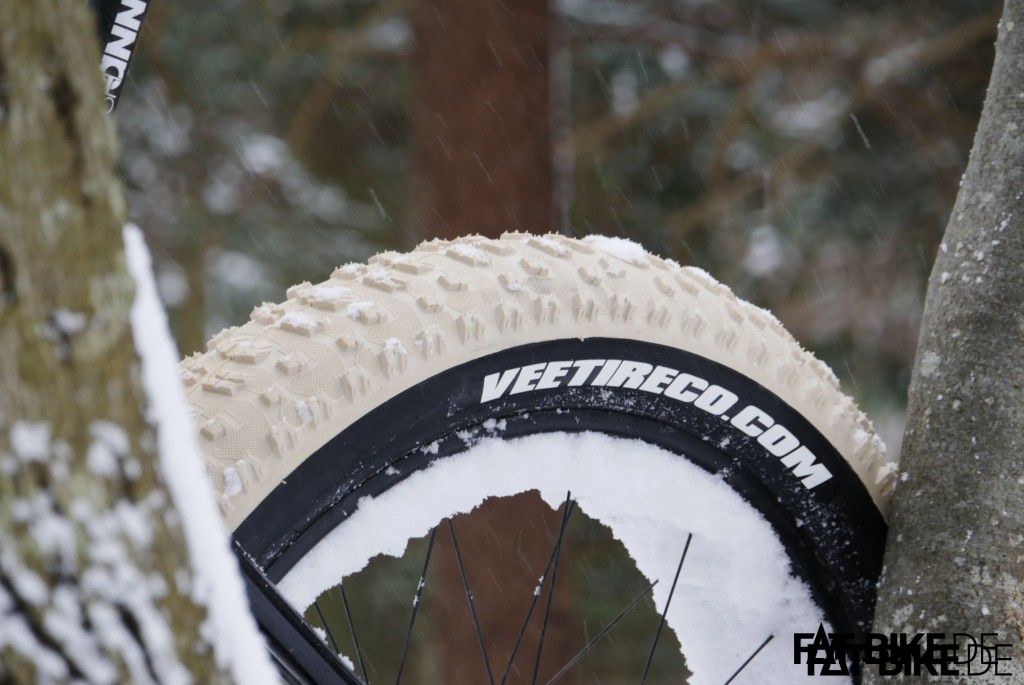 The performance on snow is better than what we know from most black FATBike tires. You can feel how the soft studs wrap around every snow flake they can find just to keep you going. Fun fact: the edges of the groove your Bulldozer cuts into the snow are razor sharp. This is due to the shape of the shoulder studs that literally cut through the snow. Not sure if that is of any benefit. But it looks nice!

It feels wrong to ride on mud! 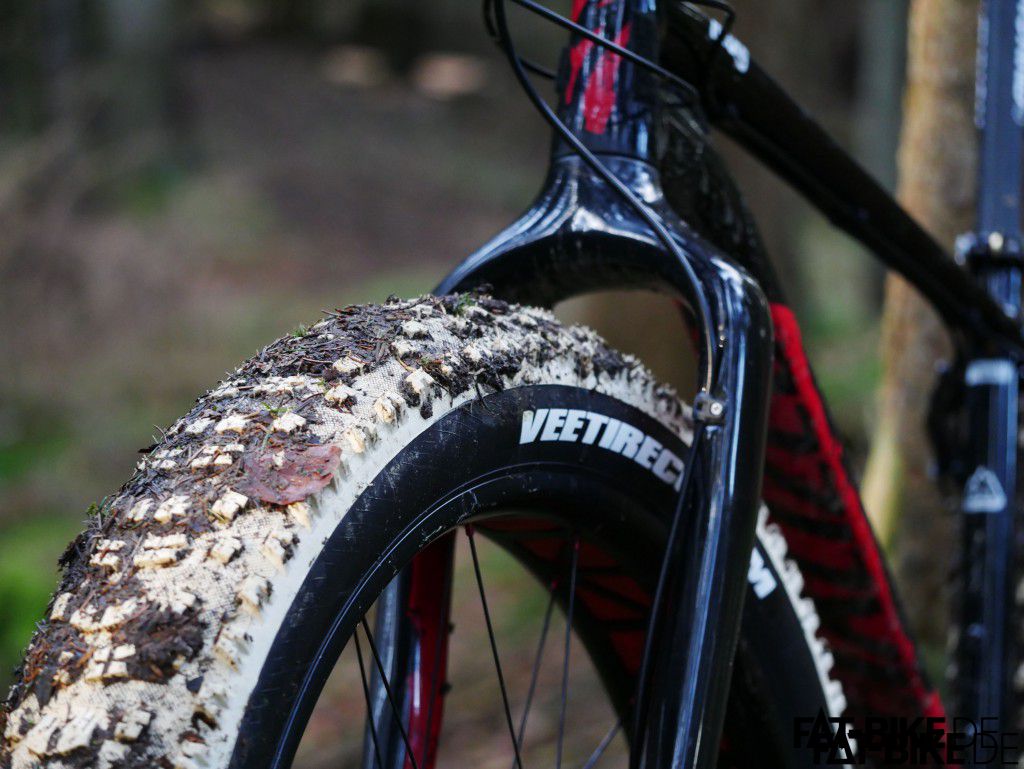 So, what we now know is: there's a solid performance on snow. But what about riding on plain earth? First of all: dunking this beautiful white tire into knee deep mud feels just wrong. But don't worry – cleaning the dirt off the PSC rubber is easier than you might think. And no doubt the Vee Tire Bulldozer* Pure Silica gives you a fantastic ride on gravel and dirt as well. The soft rubber ensures traction even on wet roots and slippery stones. Also, and this is one of the biggest improvements over the 2014 (and earlier) models, the Vee Tire Bulldozer Pure Silica has become what we would call a comfortable ride. Gone are the times when a root-spiked single trail crushes your wrists and tortures your spine. The Bulldozer has surely cought up to the best in class! 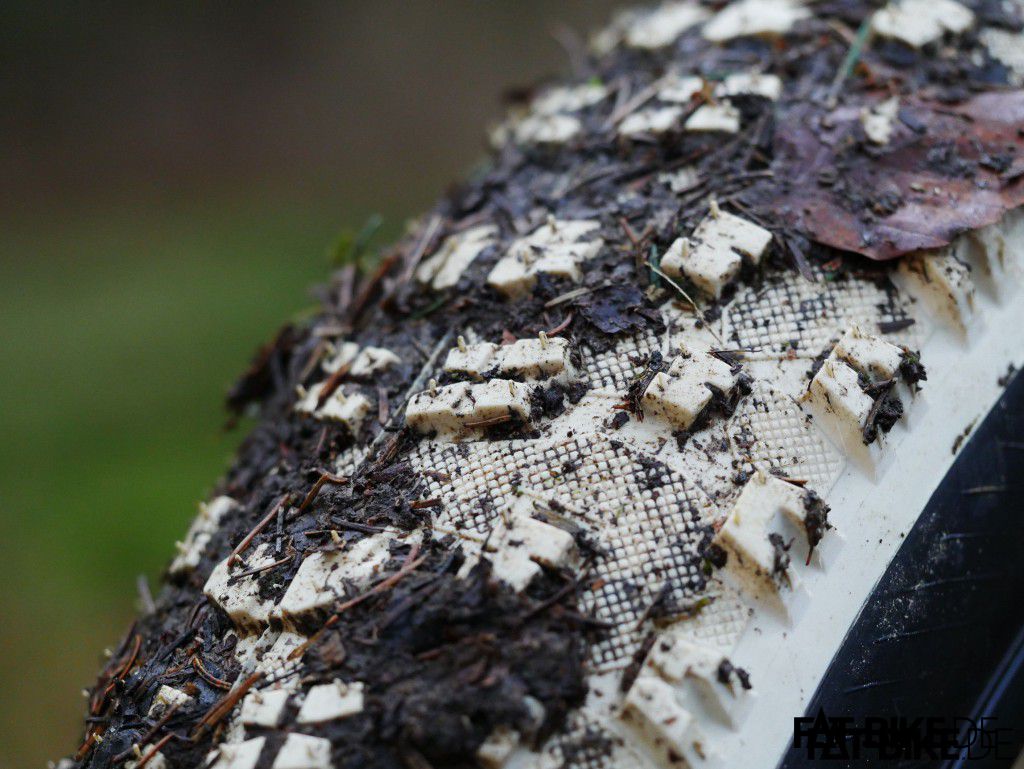 Yet it's a tire that runs best on a tad bit more pressure than you would usually use. We added approx. 25% to our standard pressure (0.5bar vs. 0.4bar in our case) which results in a good compromise of precise handling, low rolling resistance AND good comfort.

On that setup we then rode on gravel as well as boring tarmac roads as this used the be the worst part with pre 2015 Vee Tires. Surprisingly the Vee Tire Bulldozer Pure Silica even here came up with the same smooth and silky ride as it did on snow and gravel. Neither could we detect the formerly high rolling resistance nor did the tires lack any handling and cornering performance. So, also in this category the Bulldozer has closed the gap to the top league of FATBike tires.

However we doubt that the soft PSC compound will last long under such circumstance. Anyone who prefers riding on hard and solid surfaces may rather choose a harder compound that is less prone to erosion instead. 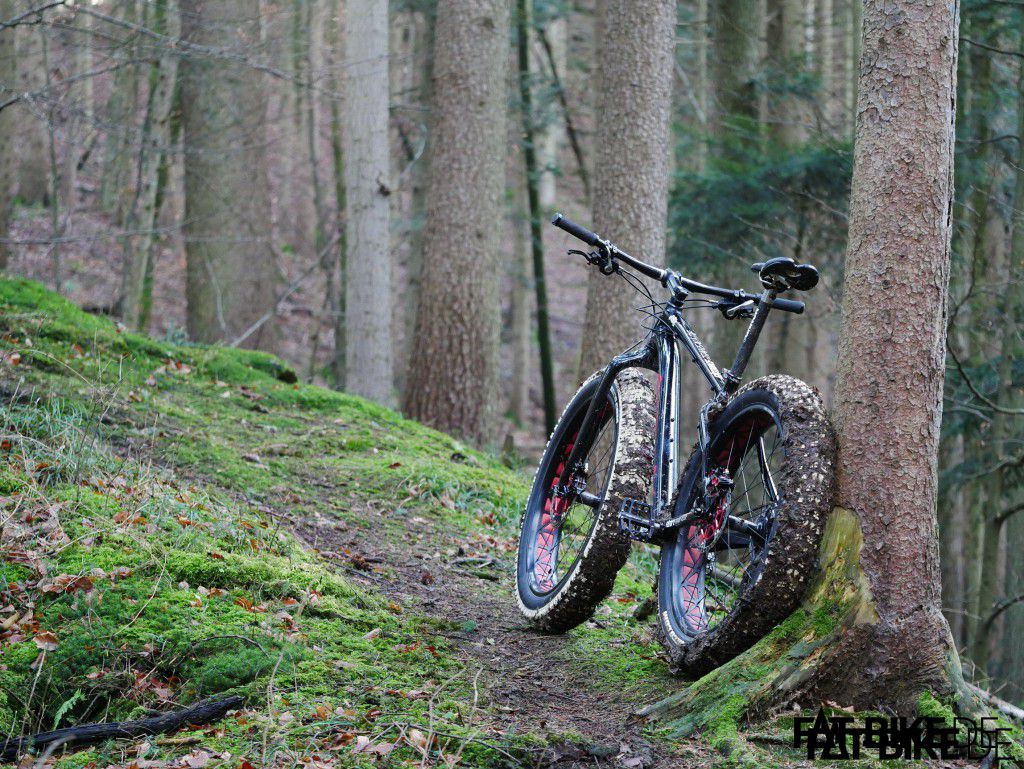 All eyes on … single trails!

As previously indicated we've never been fans of Vee Tires. But we're not here to „test and forget“. The re-testing of the Vee Tire Bulldozer* has drawn a dramatically different picture as we got in the past.
The handling has heavily improved and so did rolling resistance and riding comfort. The new Bulldozer for sure has become a member of the leading group of FATBike tires. Yet we would not garnish it with phrases as „nimble as a weasle“ or „surgical precision“ (sorry – german phrases translated. Hope you get what we mean… ;)). It is what it is: a Bulldozer. It digs, it rakes, it screams and it pushes you forward. It's a bad ass fun tire and for sure the Bulldozer has fun at work. And this is why it's so much fun to ride it.