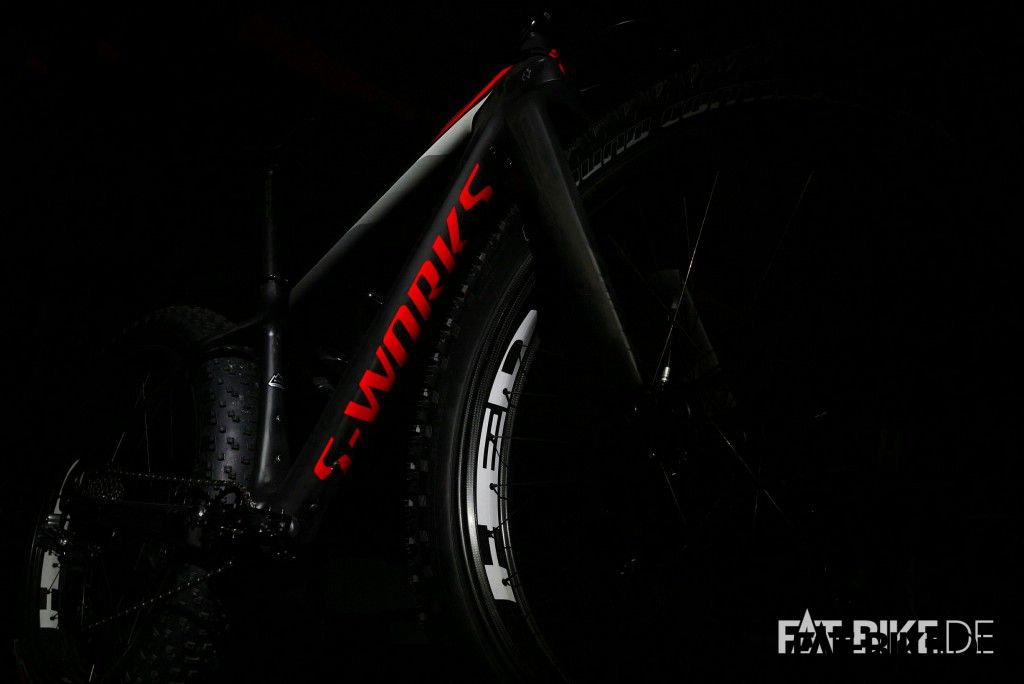 Did you ever dream of being Batman? Well, most boys do… But what is it the Dark Knight dreams of when he lays down into the Batbed? Seriously, we have no clue. But we know something that might cause him some sweet dreams. Or sleepless nights. Or maybe both. And something that in times of carbon emission madness might ease his environmental  conscience… At least as long as he doesn't light it up… 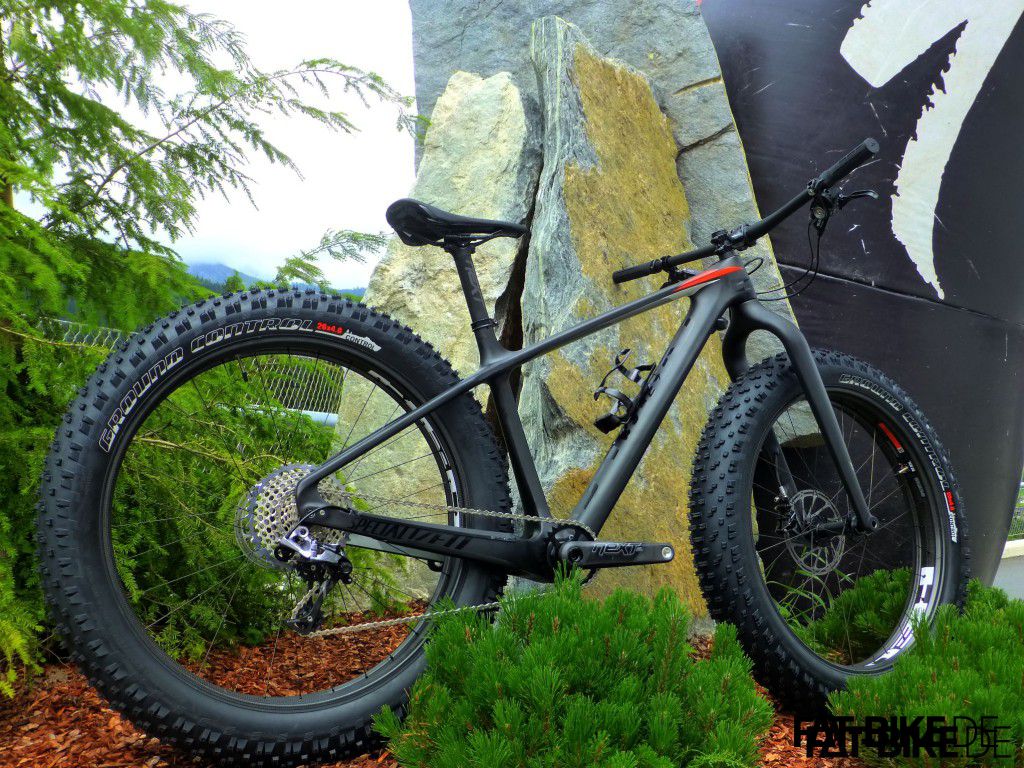 Leogang, July 2015. One of our very first pictures of the S-Works FatBoy.

July 2015. Dan and I are visiting the Specialized Days at Leogang/Austria. Initial contact with the Specialized S-Works FatBoy. We instantly realize that life will not go on without it. We wake up at night screaming it's name… No, no way to live without…
And just as we were up and willing to trade in some useless organs, we got one of those phone calls that change your life: Specialized is gonna give us S-Works FatBoys for a long term test. Well, normally we hardly get shocked. However this time it worked pretty well! So, into the Batcave – ahem, bike garage to clean it up and prepare a nice and cozy place! 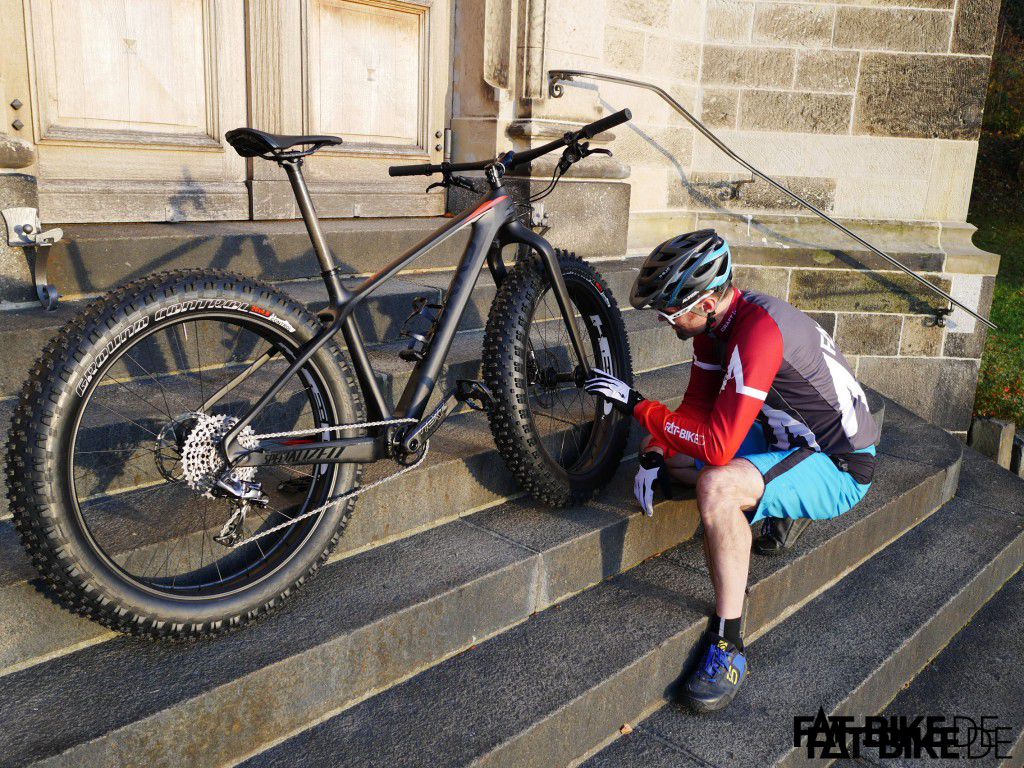 Check-up! Matt and his S-Works FatBoy. 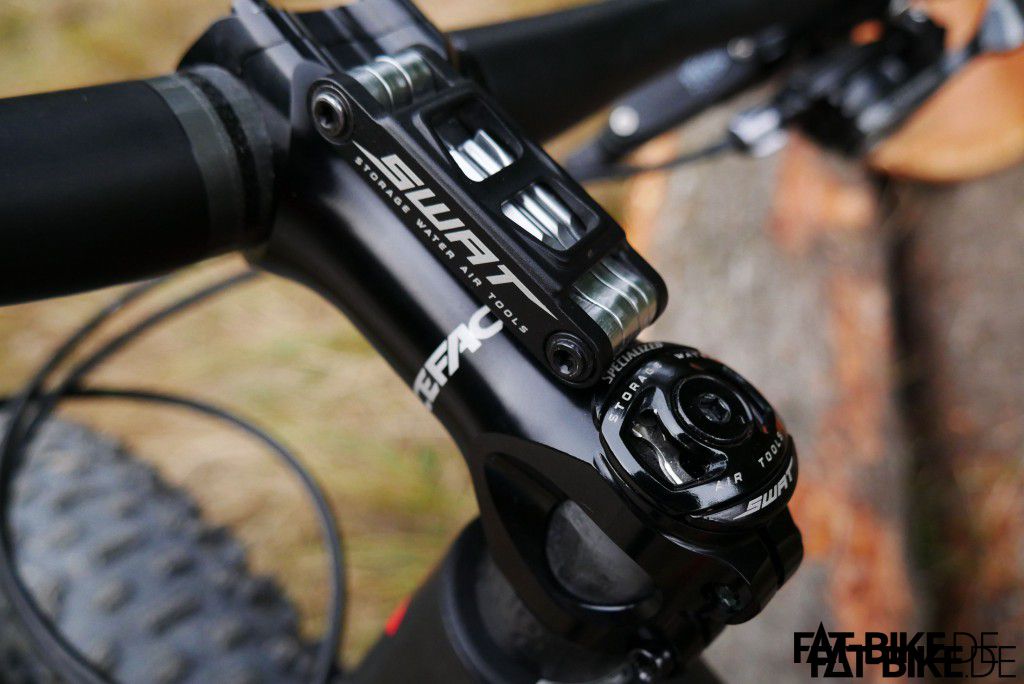 SWAT – all you need for an emergency repair!

This measure also lowers the handlebar by approx. 2.5cm which, combined with a slightly shorter overrun makes the bike more snappy. The rims which are 5mm narrover than their aluminum pendants, add even more beef: they give the tires a slightly rounder shape forcing the shoulder studs a bit more into the sidewall. With that, the Specialized S-Works FatBoy scurries around any corner no matter whether you are hunting a super villain or simply enjoy your home trails. 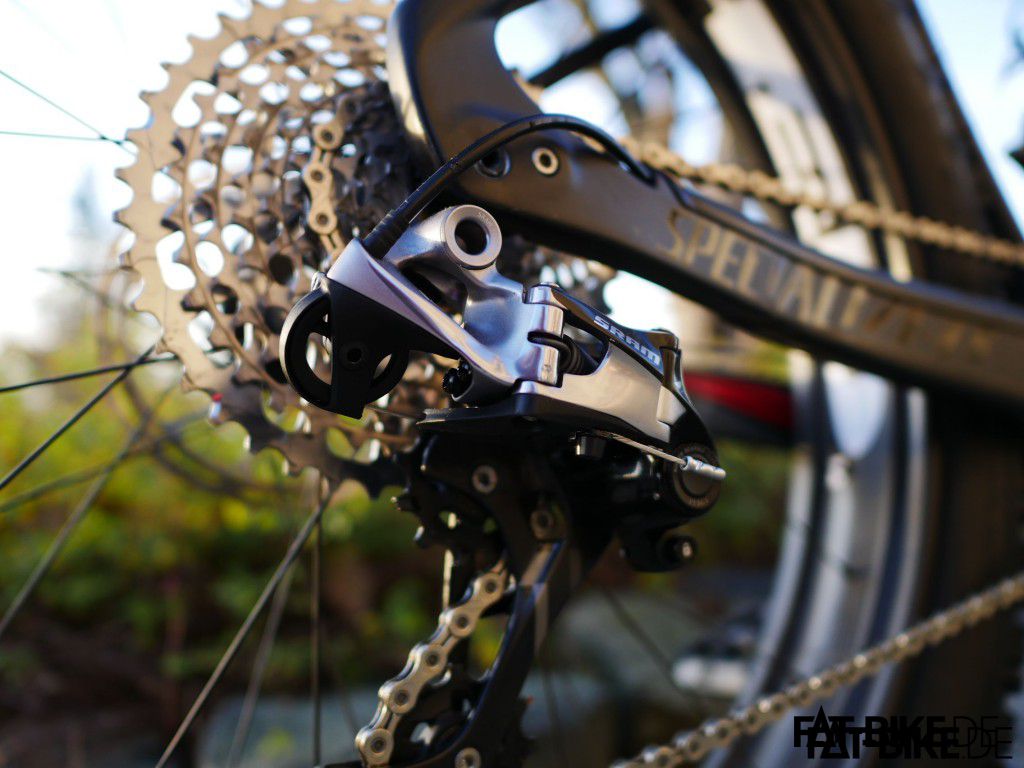 Batman loves high tech. We love high tech. Specialized loves high tech. Perfect pitch! We already told you about the firework of features the Specialized S-Works FatBoy burns down. And in our introduction we mentioned that you better not light the S-Works FatBoy up. Not to mention this would be a bloody stupid idea however for the left over to be just a hand full of screws and a few pieces of metal. The fraction of carbon is massive: frame, handlebar, seat post, saddle, brake levers, cranks, some pieces of rear derailleur and shifter and even the rims are all made of that high tech fiber. One can say that it's never been sexier to take a bucket of coal from your shed… 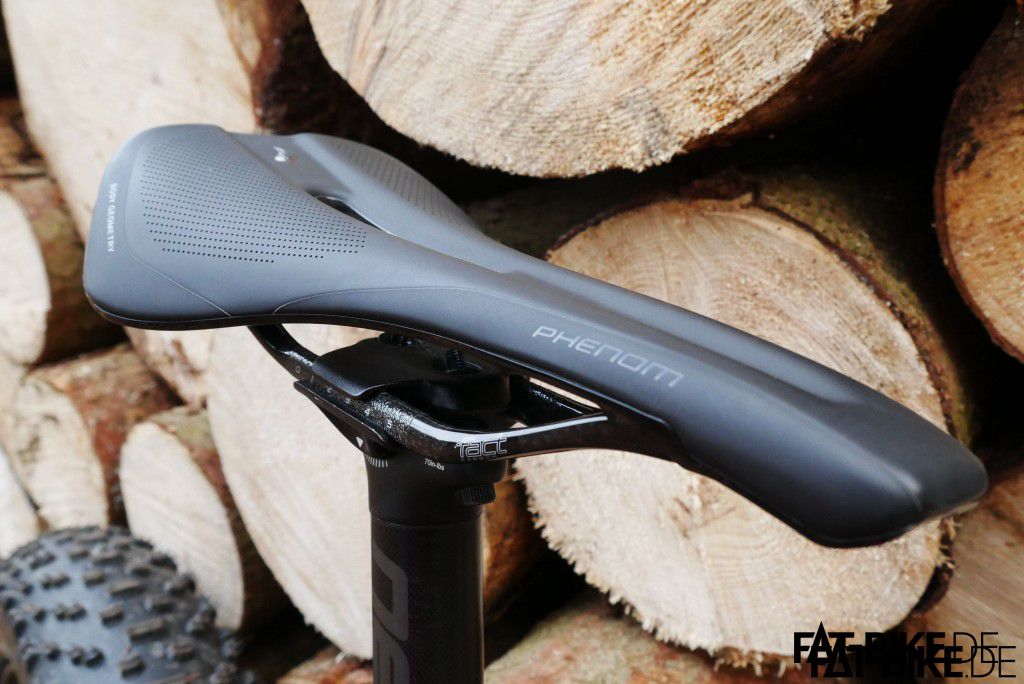 PHENOMenal: also the saddle is made of carbon.

But what's my benefit you may ask. Hmmm… guess what – it's lightweight! Alfred, the kind butler of Batman, will not suffer from lifting the Dark Knight's bike onto a rack to clean it. And the average FATBiker enjoys the feeling of ease when riding the Specialized S-Works FatBoy.
It weighs in at 11.9kg including pedals, bottle cage SWAT kit, 4.6 inches Ground Control tires, heavy Specialized FATBike tubes and uncut brake pipes. By the way: unlike mentioned on their website our Specialized S-Works FatBoy is not yet equipped with 4.0″ Fast Trak tires. As soon as their appear on the market you can, mount them without tubes, get some extra performance from your bike. Just like chip tuning for a Batmobile! 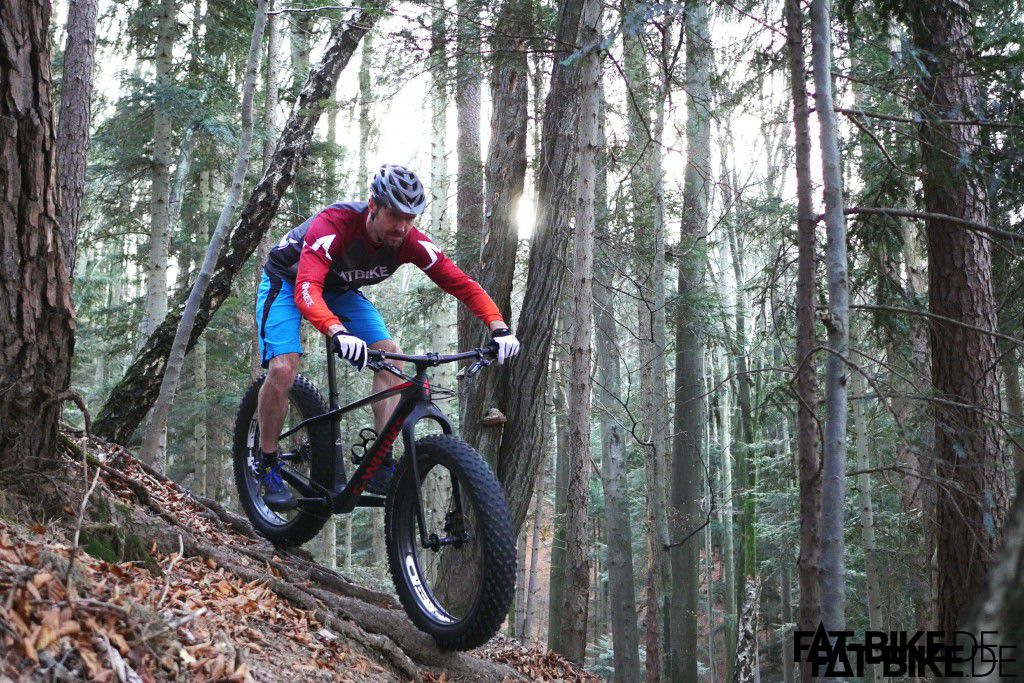 The FATMobile on a single track. Just nice!

But: how does the FATMobile ride? In theory it sounds nice so far and expectations are high… Thanks to the feathery H.E.D. carbon rims combined with super light DT Revolution spokes you can feel a certain easing right after take off. The Specialized S-Works FatBoy avidly follows your cornering/acceleration/braking instructions and gives you a much more direct and responsive feeling than the other FatBoys do. The good feeling is further accompanied by the awesome SRAM Guide RS Carbon brakes. Their not fully up with the brute force of our standard choice: the SRAM X0 Trail with 200mm rotors. However it's four pistons within each caliper relentlessly clamp the 180/160mm rotors yet providing a very good modulation. You can virtually drop from light speed to zero in just a few seconds.
By the way the braking power exceeds the XT brakes mounted on a FatBoy Pro Trail (with identical rotor sizes) by far. 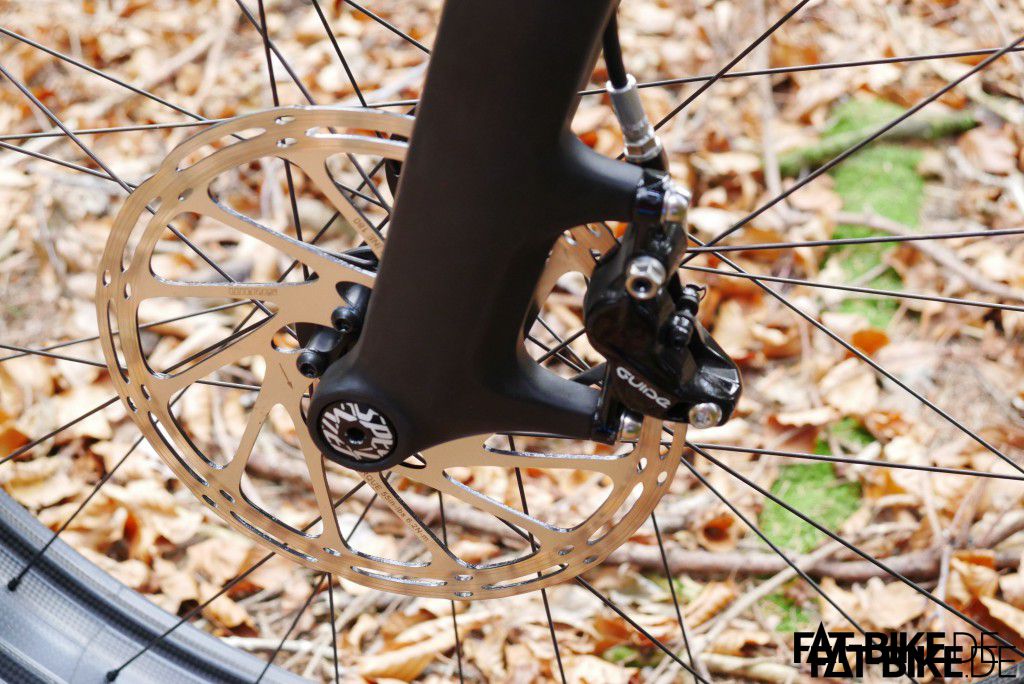 And that's what you need. Talking about acceleration Batman relies on nasty gas turbines and jet propulsion engines. On a Specialized S-Works FatBoy he can have a hell lot of fun without that old oil burners! Even brute acceleration causes no flex or warp of the super stiff carbon frame. Combined with a pair of equally stiff Race Face Next SL cranks and the super light weight wheels the Specialized S-Works FatBoy provides a nearly loss-less convertion of your power into acceleration. It literally zooms you to the horizon! However the frame rides very comfortably without having this typical kind of hardness of a dead aluminum (or even a cheap carbon) frame. Just the fork, aptly named „Chisel“, is a great tool to crush your wrists. The only kind of flex it knows is a few millimeters back and forth… A suspension fork would be a nice treat here however considering the sheer beauty of this sculpturesque FATBike it would well be a sacrilege… 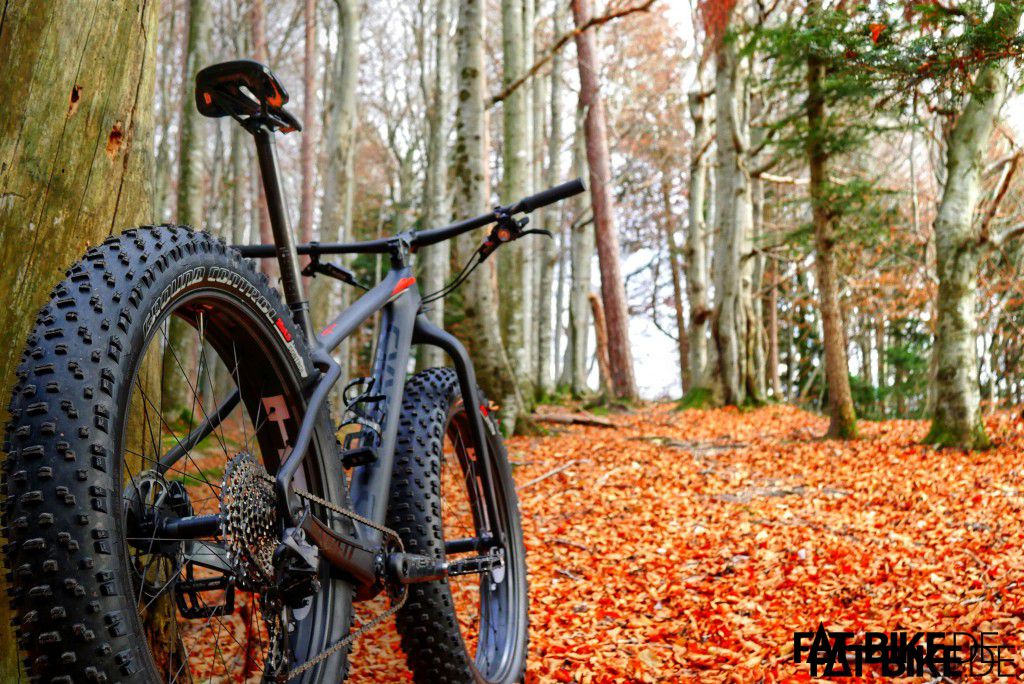 Sit down, relax. It's just perfekt!

But hey, wait! Was that some kind of criticism?? Well there's always some reason to nag… So we temporarily switched off our ecstasy to search for some pain points.
First one: the price. Oh c'mon! Seriously? Look, it's not really surprising that one can't buy Specialized's S-Class for a bargain price. Take the effort, the parts, the uncompromising build and of course the well earned (over 30 years of hard work) reputation – the Specialized S-Works FatBoy is a carrier of the latest bad ass technology. It shows what conventional bike building (hard tail, not electricity) is good for. That's it.
This is also not really criticism but something to be considered: the rims are made of a thin layer of carbon fiber. They can hardly withstand any direct contact with roots and rocks without damage. Such impact could easily smash the rim edges – and thereby also your budget. To avoid this nasty situation make sure to maintain your tires pressure on a rather high level (we ride it with .45 instead of .40 bar).
Few more things: the chain ring is a bit too small for a bike which is that fast, the KMC chain is an unworthy company for the overall complete Sram XX1 shift kit and the Syntace stem is nice treat but does not match the bunch of Race Face parts installed…
Seriously, it's not fun to search for weakness at all cost. Who would critizise Batman??? The Specialized S-Works FatBoy rocks! We'll let it rock. Our long term test will tell us about any real weakness – or if there is one.

A matter of price 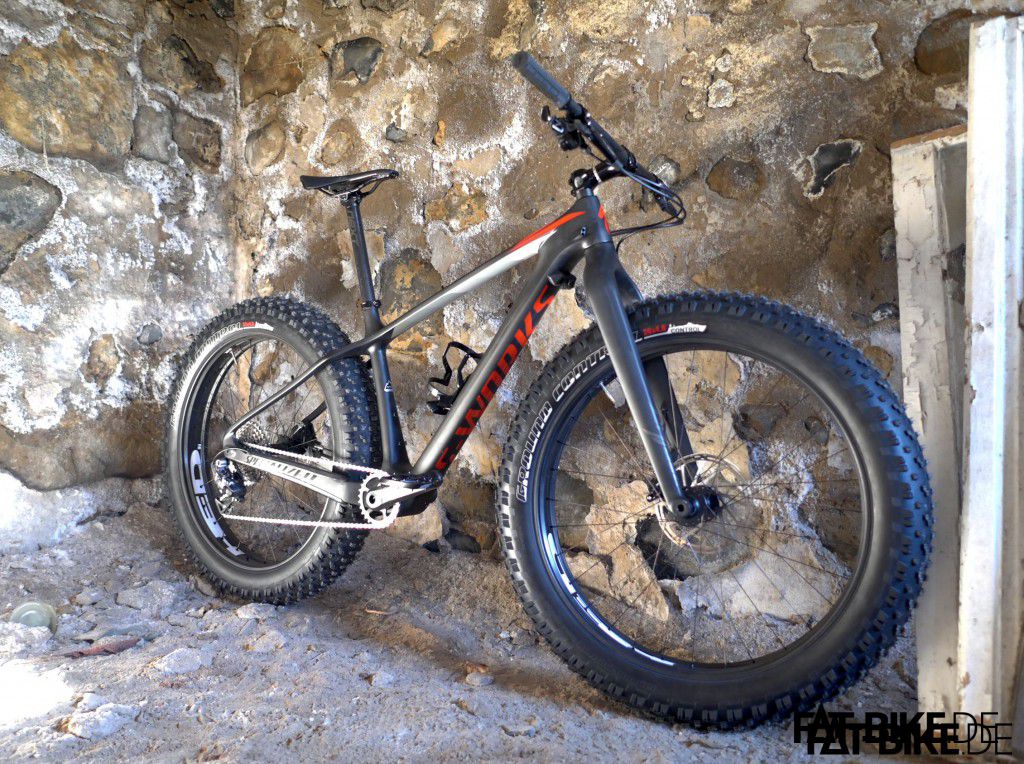 A bucket full of bucks: the Specialized S-Works FatBoy

So, let's get down to business. We all know that Batman in real life is a billionaire called Bruce Wayne. And that's another indication why the Specialized S-Works FatBoy would make a perfect FATMobile: Bruce doesn't care how to fund 6.999,- Euros for his new company bike. But as said above: the price is outstanding. And so is the Specialized S-Works FatBoy. It just matches.
However for all of you who – by the way just like we do – have some serious issues with convincing your banker (or husband/wife) to give you enough cash, Specialized offers a much more affordable version: the Specialized FatBoy Comp Carbon that sells for 3,299.- Euros. Of course it does not have all those nice bits and bops but it has the same great frame. And in case you're sitting in the US or Canada you can also benefit from a local offer that is called FatBoy Expert Carbon. With this one also Robin can join the caped avenger riding through the Gotham forests! 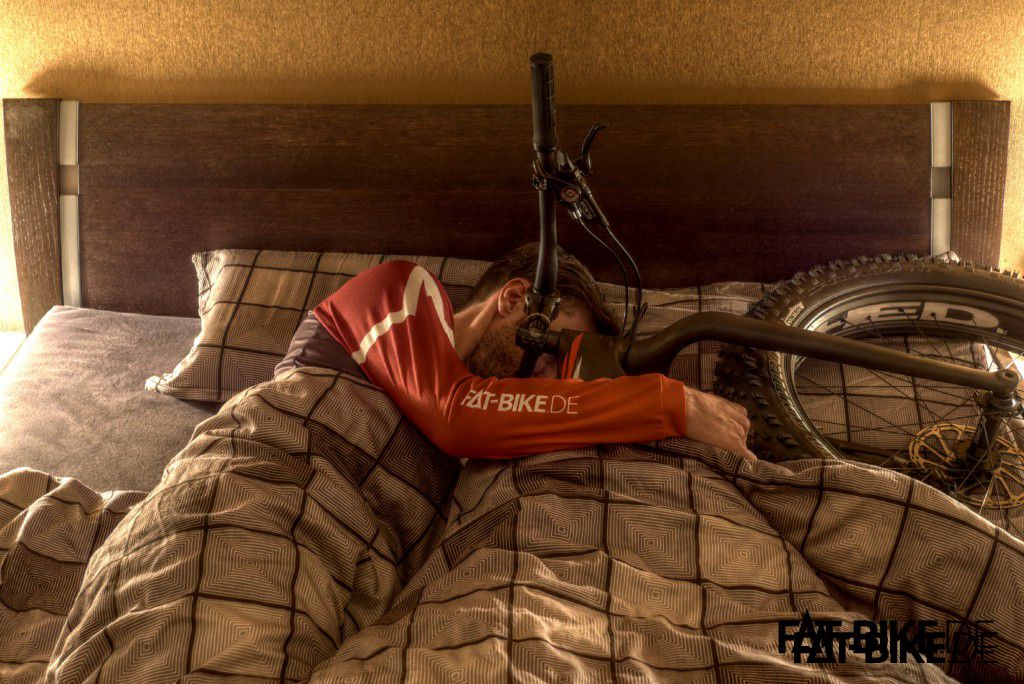 One night stand or true love? For sure we'll find out!

The Specialized S-Works FatBoy – FATMan begins! This means for us: a spectacular start into the new FATBike season and an exciting long term test that will separate true love from a one night stand. The Specialized S-Works FatBoy kicks ass. It's out of this world. Who, apart from us, could like it: Batman, Darth Vader, Michael Knight (alias Knight Rider – does anyone remember?) and of course the bloke who has invented the stealth bomber. And of course every FATBiker who prefers the extraordinary. Extraordinary also in terms of performance.
For sure the Specialized S-Works FatBoy is not a FATBike you just buy right off the shelf. Usually the price tag should avoid it. However its very efficient drive train and its (for a FATBike) razor-sharp handling turn it into a high precision tool which – being in the right hands – has an enormous performance potential.
Even though the Specialized S-Works FatBoy can give you some classic FATBike romance it is a playful and twinkle-toed bike with a thoroughbred race genom. A FATBike that gives you all the enjoyment to race your home trails flat out and enjoy some speed kicks.
We'll tell you every now and then how it performs under our everyday conditions!

So, Batman… Greedy to have on? Don't even think about this one – it's OURS!!!